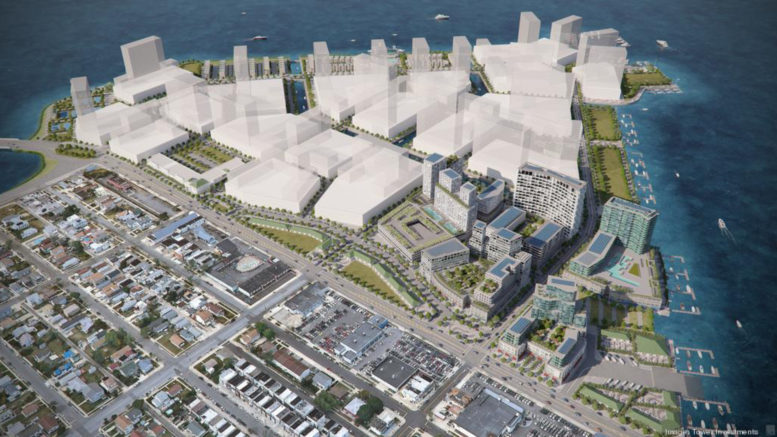 A massive $3 billion redevelopment master plan has been revealed for the 140-acre Bader Field site in Atlantic City. The project, called CASA MAR and developed in partnership by both Tower Investments and Post Brothers, would be one of the largest in the city’s history, built over five phases over an estimated span of 12 years. The project is expected to add around 10,000 residential units to the local market. An additional 400,000 square feet of office and retail space is also planned for the property, making it a true mixed-use neighborhood. A total of 20 acres of public amenity space such as green spaces and parks will also be included with the project.

The development would also provide employment opportunities and economic growth. Plans call for the creation of around 44,000 construction jobs, with around 8,000 permanent jobs after the project’s completion. 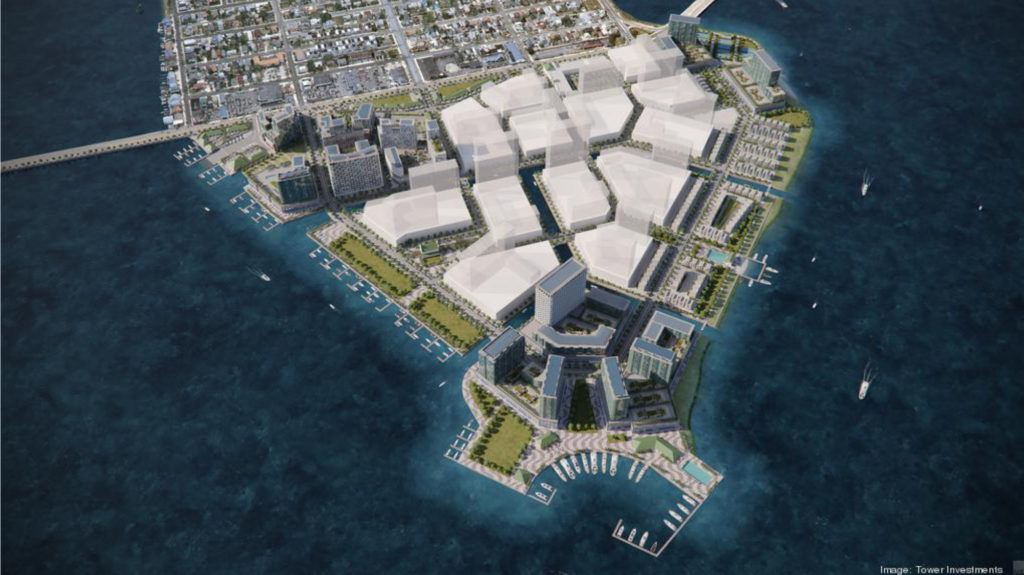 Renderings for the master plan are conceptual, though they still provide a glimpse at the planned scale and tentative design that the final product may feature. The development will be oriented around and take advantage of its waterfront location, while also featuring a newly constructed canal system inspired by likes of Amsterdam and Venice. The project will feature a multitude of high-rise buildings, though not exceptionally tall, with most structures likely falling in the 100-250-foot range. 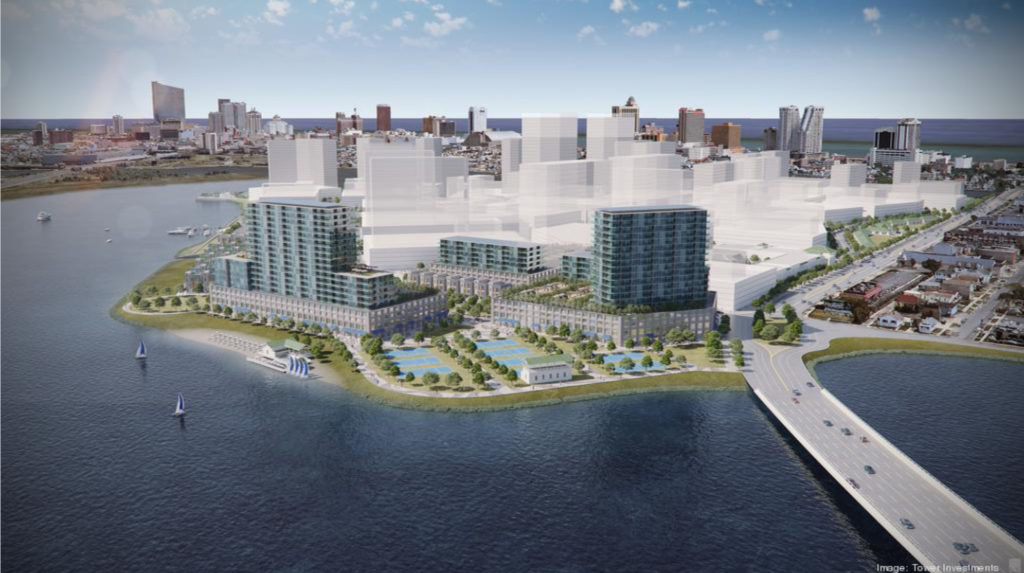 The buildings in renderings that are not simply slightly opaque white blocks all retain modern designs, similar to other coastal developments seen in other locations. Most buildings feature large glass components with balconies, and are oriented so that the majority of residents will have proximate access to waterfront views.

An interesting feature in the renderings is the variety of housing types in the development. Rather than having a largely uniform layout of similarly-styled buildings, available imagery depicts townhomes, lower-scaled multi-family buildings, and small-scale high-rises alike, which would allow the area to feel slightly less of a masterplanned community and bit more of an organic neighborhood. 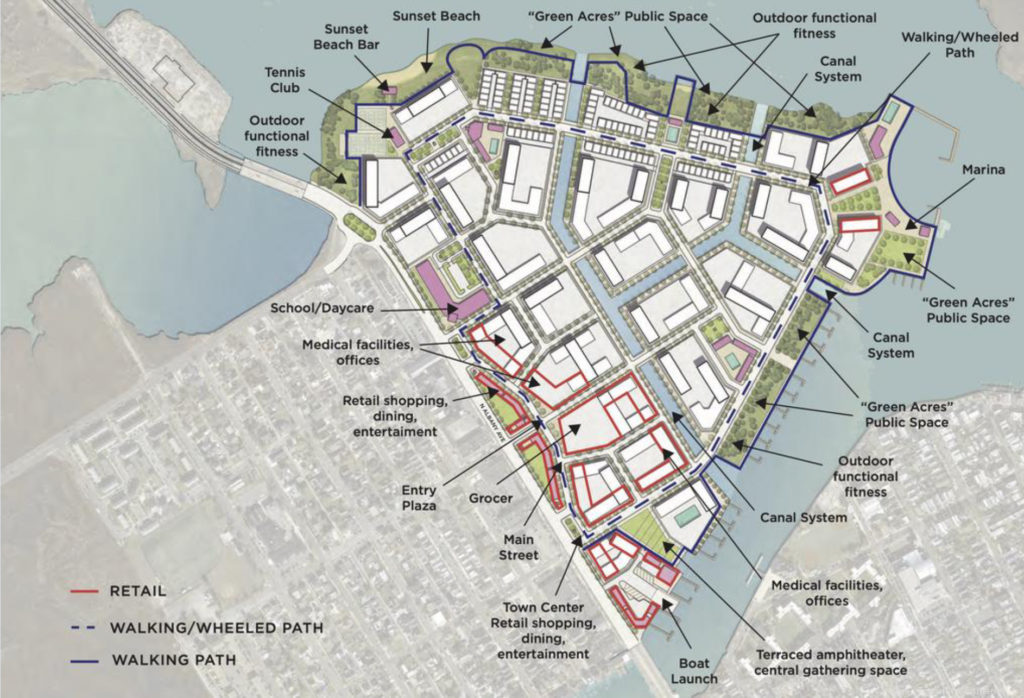 What is perhaps one of the most exciting details within the new development, however, is the emphasis on new green space. The entire perimeter of the development is shown to be covered in green space and pathways, allowing the surrounding community to enjoy the complex. Rather than barricading these desirable spaces, as some projects may do, plans for CASA MAR highlight the public aspect: non-residents and workers will still be able to walk through the new neighborhood just as those actually invested in the area. 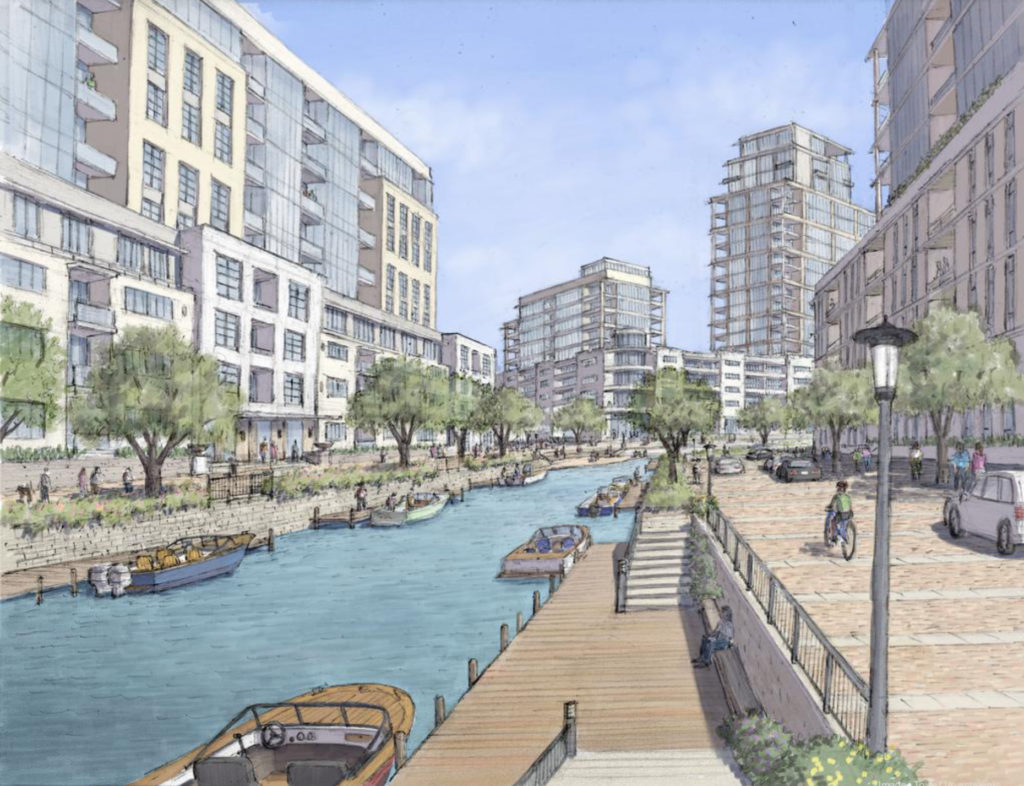 The new canal system has the potential to create a more intimate streetscape environment that will nicely contrast the more open and sweeping “green acres” along the waterfront. Though plans do not show retail space planned along these canals, the simple presence of street greenery and human-oriented pedestrian space will likely prove to create a desirable and welcoming environment. 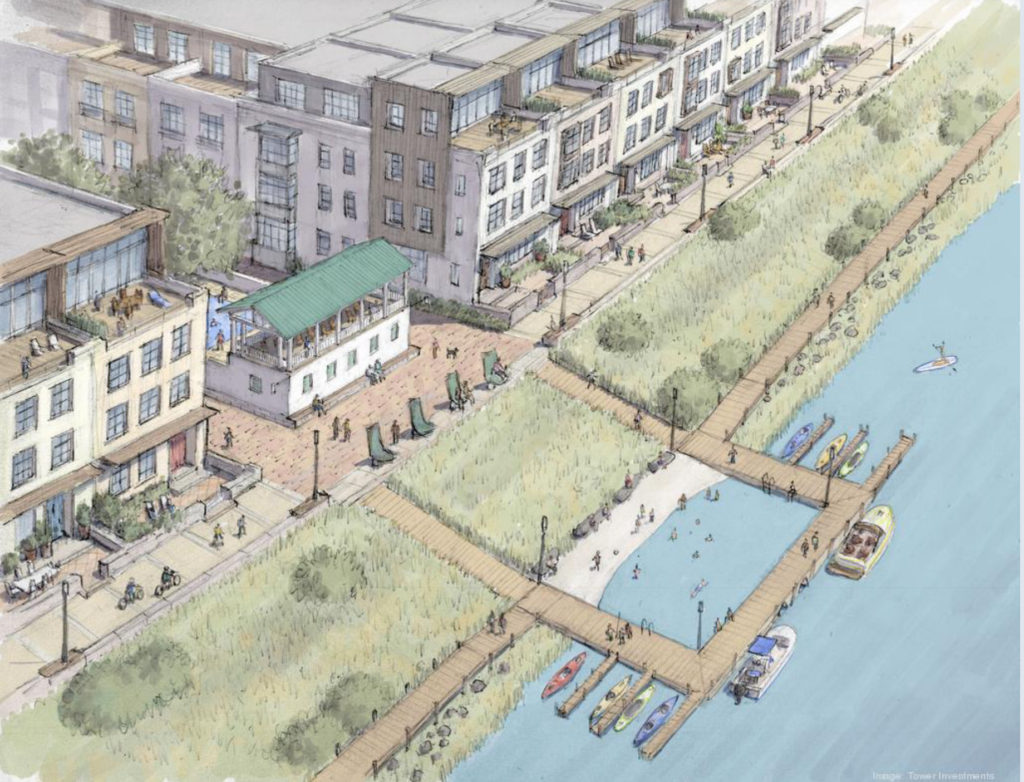 As for the retail space, there certainly will be no shortage of it, and the neighborhood will likely become a destination for those in surrounding neighborhoods and beach towns. Most heavily oriented along Route 322 side of the parcel, diagrams show a new “Town Center” with features such as “retail shopping,” “dining,” and “entertainment.” More retail space will be included at a marina planned for the eastern portion of the site. 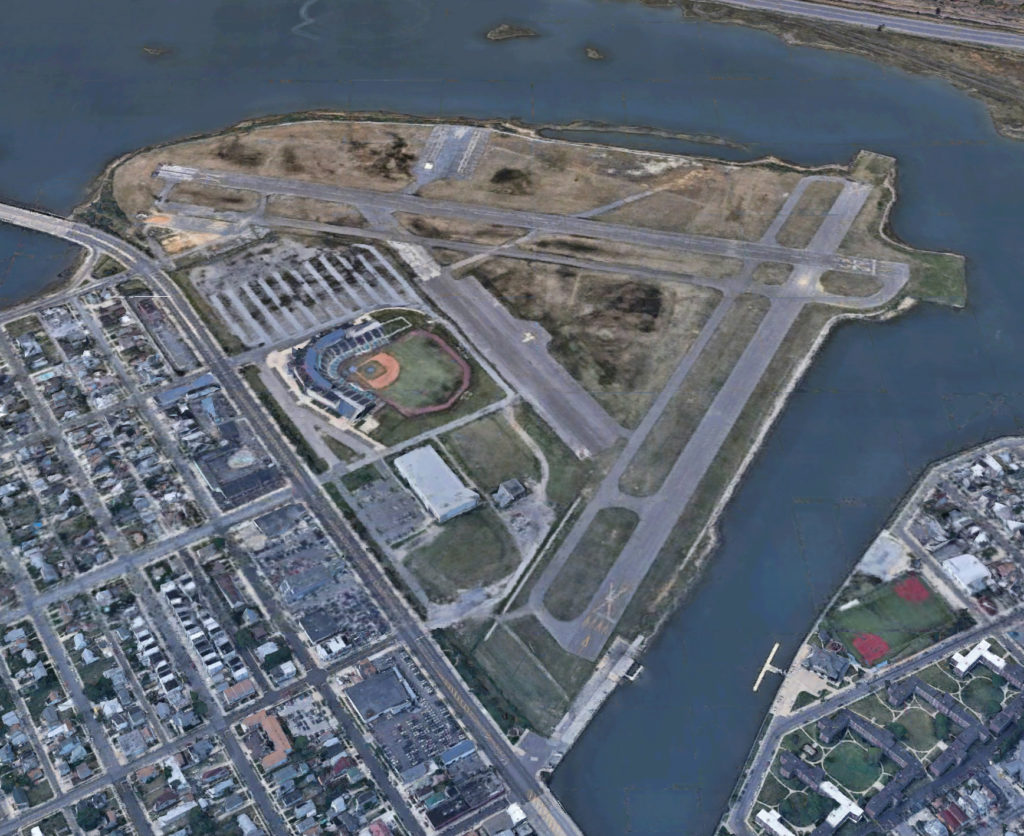 Presently, the massive Bader Field parcel is largely unused and does not contribute much to the surrounding area. The discontinued Atlantic City Surf, a minor league baseball team, have not played at the site in more than a decade. The airport that covers the vast majority of the site has been dormant for an even greater time. The site, unfortunately like others in the city, has simply sat awaiting redevelopment and investment for quite some time, and it is certainly positive to see some action moving forward after many years. 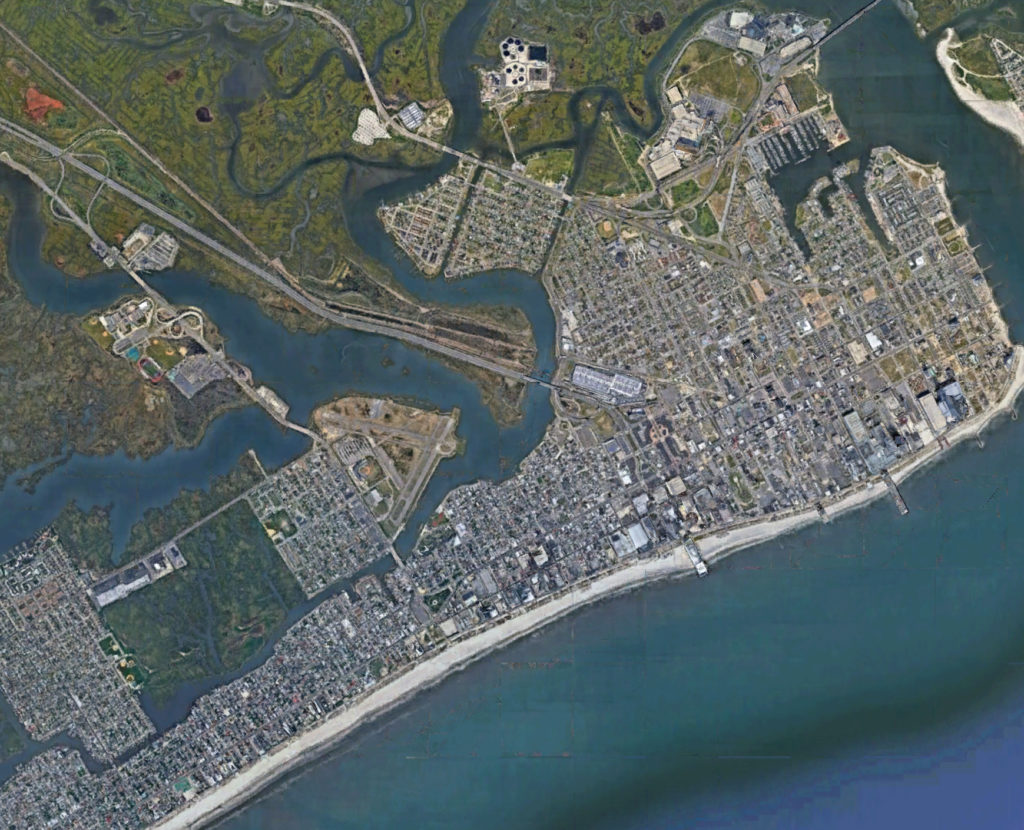 If constructed as plans suggest, CASA MAR has the potential to be one of the most impactful developments in the Philadelphia region. The added 10,000 residential units will be a massive contribution to Atlantic City and will help restore former population numbers. Very few projects across the nation add such a number of units, and it would be incredible to see this quantity delivered in full.

The added retail and green space would likely make the new neighborhood a major destination. The jobs created to support these commercial operations will be a great employment opportunity for the surrounding area, and the concentration of these planned businesses would likely bring an influx of new people and money into the city.

The project takes a form that will need to be embraced by Atlantic City moving forward. For many years the city has largely depended on casinos to support its growth and economy, even despite their struggles. A variety of prominent land parcels in the city are zoned almost exclusively for such use. In order for authentic and increased growth, AC will need to expand its horizon and add to its identity by constructing true mixed-use areas such as this in order to strengthen its existing strongpoints centered around the city’s boardwalk and gambling industries.

The numbers and renderings available for the project are all subject to change moving forward. It is not even a guarantee that the joint venture between Tower Investments and Post Brothers will even be the group to develop the parcel. It is still possible that a separate party will obtain development rights for Bader Field, and that an entirely different project moves forward at this location. This project, however, seems to be a strong candidate and example for what should be built in this location.

YIMBY will continue to monitor future movement made on the project moving forward.