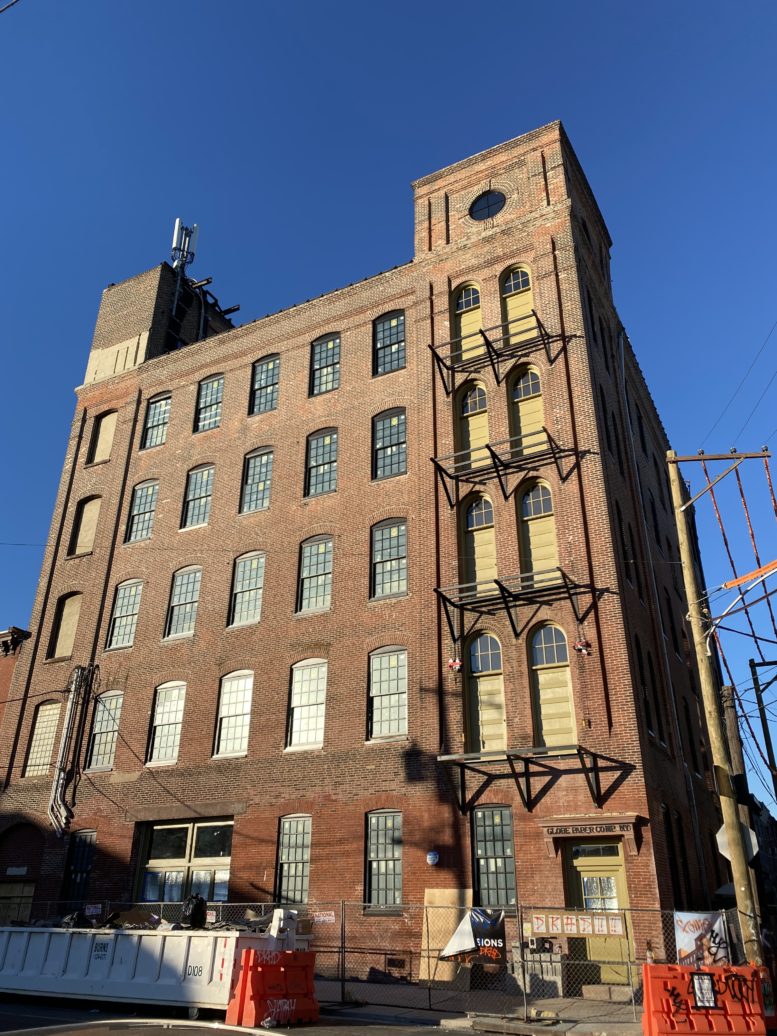 Renovation work is making considerable progress on Paper Factory Lofts at 173 West Berks Street in Norris Square, North Philadelphia. The building rises five stories tall, with certain sections rising to a height of six stories. The industrial building was formerly home a paper manufacturer, thus the project’s name, however this business has moved out of the facility. Now, developer Urban Conversions is renovating the building to hold 30 apartments. Interiors will span 28,000 square feet.

The old building features a very attractive and stately exterior that resembles other industrial buildings in the surrounding area. Brick covers the near entirety of the facade, with ornate detailing and arched windows adding more extravagance. An attractive cornice sits at the top of the building and helps nicely cap the structure.

Work is now well underway on the building, with exterior renovations nearing completion. New windows have been installed throughout the exterior, helping facelift the building’s former tired look and transform it into a fresh-looking reuse. New doors have been installed and painted as well. However, the vast majority of the building’s progress lies within the interior, as the developers navigate the tricky progress of transforming a former industrial building into a modern multi-family structure, a process that takes much more time than installing new windows and doorways. Until work is completed, a chain link fence will encapsulate the building’s footprint and temporarily block off sidewalk traffic.

The new development is a great transformation for the site. Rather than having the historic structure demolished to make way for a new construction building, its preservation is a major benefit for the community, as pedestrian passerbys will be able to enjoy the stately facade for any years to come. Additionally, the newfound density will make a lot of sense at the site, given the presence of the Bears Street El station just a couple of blocks to the east, and the many businesses in the surrounding area.

Recently completed next door at 171 West Berks Street, a former one-story industrial building has bitten the dust in turn for a new mixed-use building, with 28 residential units. This project is basically finished, and apartments are listed for lease. the new density brought with that project is also a coveted addition for the area, and the new commercial space on those ground floor should be good for improving the pedestrian experience on Berks.

Completion is expected in 2022.

Be the first to comment on "Renovation Work Makes Progress On Paper Factory Lofts In Norris Square, North Philadelphia"