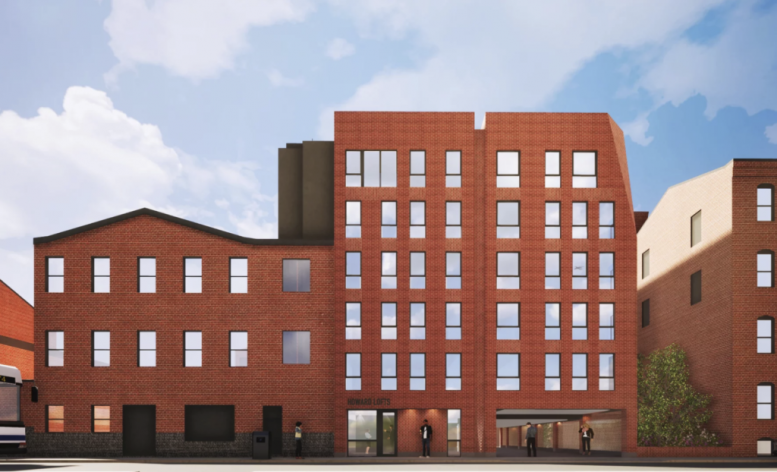 Exterior work is nearing completion at 1805 North Howard Street, a six-story, 45-unit multi-family building under construction in Fishtown, Kensington. Permits list a project area of 36,802 square feet, Bottos Construction Inc. as the contractor, and a construction cost of $8 million. The project sits very close to 1BRKS, a new development that will bring well over 100 residential units and ample commercial space, and is poised to become a local destination.

The building features a modern exterior that will be a great addition to the site. The facade is clad in attractive red brick, rising the full height of the building and matching the industrial surroundings. Most intriguing feature of building’s design is located at the top right corner of the building when viewing the structure from the west, where a triangular, diagonal indentation is be created on the facade, creating a sleek look that helps the building stand out. 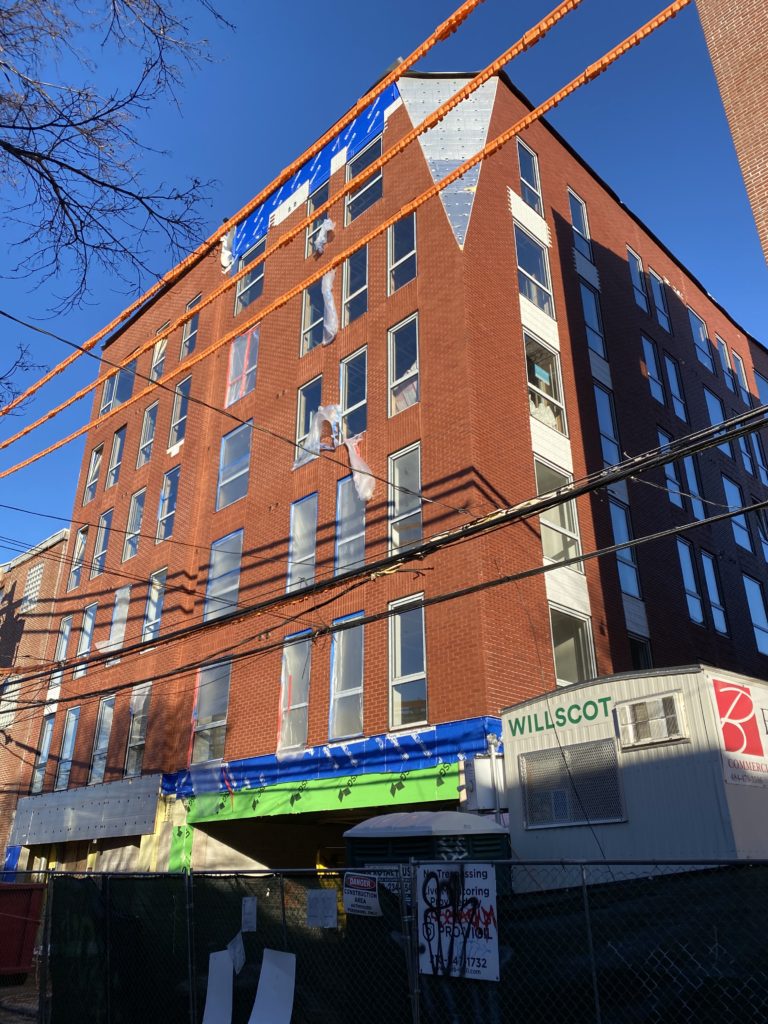 At this point, façade work is almost complete. Brick has now been assembled on most of the surface of structure’s upper five floors. Windows have also been installed, allowing us to get a sense of how the finished structure product will look. It is pleasant to see how well the building is turning out, as it will be a great architectural addition to the block once fully completed. 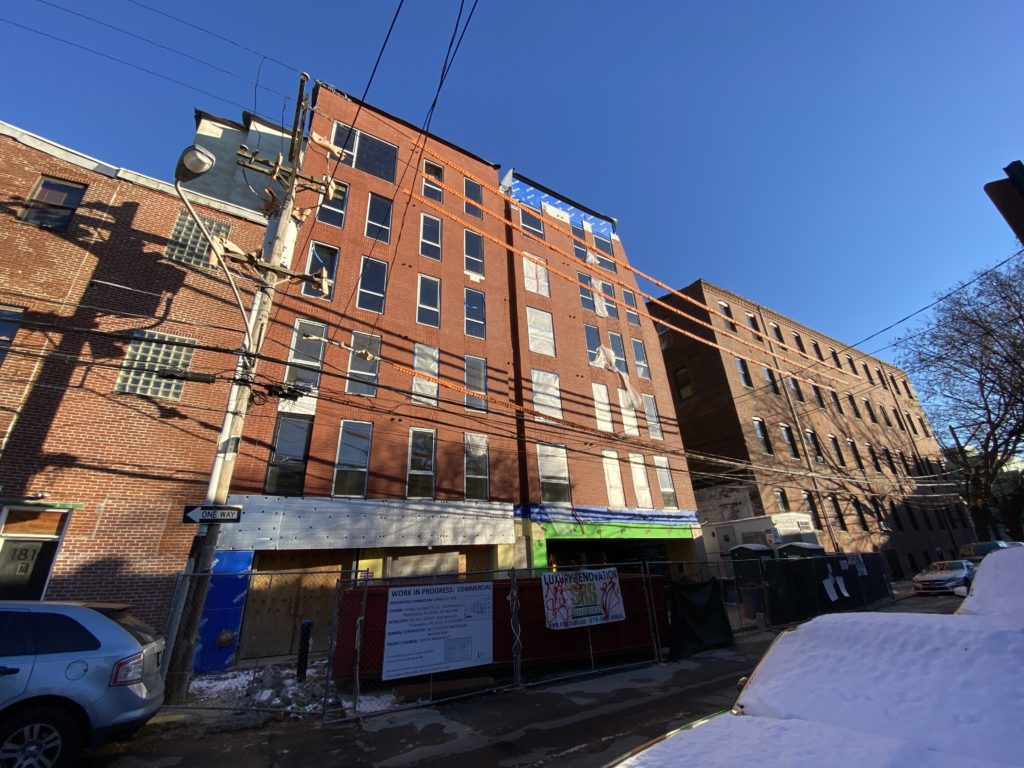 The building has been framed and topped out for quite some time, and YIMBY’s previous site visit showed the beginning of facade work. Presumably, more progress has also been made inside the structure since the last update, with the residential units drawing closer to being ready for lease. Hopefully construction continues at this brisk pace moving forward. 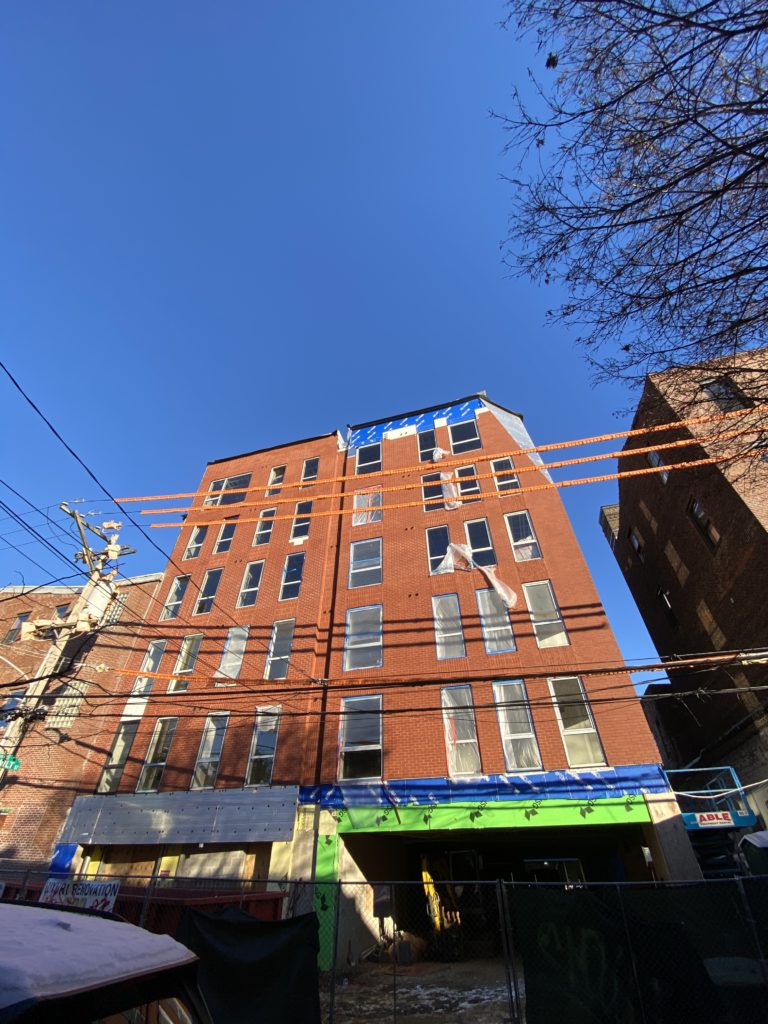 The new building is a great addition to the site, contributing a significant density boost to the area, as well as some height. Formerly, a lower slung two-story industrial building stood at the site, which featured a similar brick facade. Although it seemed like a solid overbuild candidate, that never came to be, but another attractive building has now risen in its place. The added 45 residential units at the site are great, considering the close proximity of the Berks Station on the Market-Frankford Line and the massive quantity of commercial offerings on surrounding blocks. The project will also boost the local housing stock and will hopefully fill up rapidly after construction reaches completion.

Construction work will likely reach a completion sometime later this year if it continues at this pace.