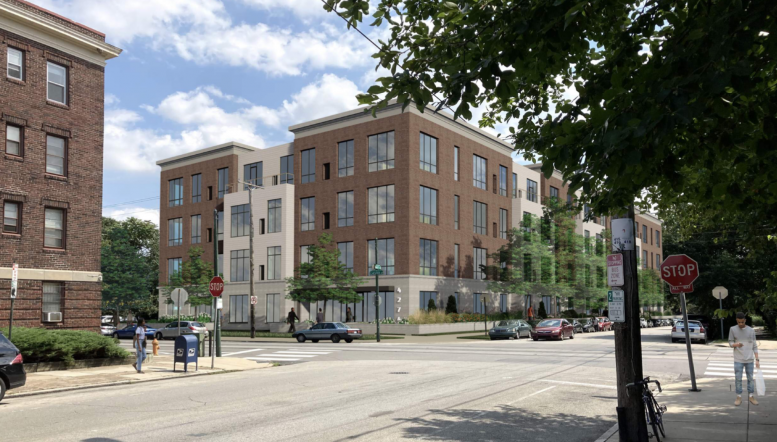 Philly YIMBY’s latest site visit has revealed that construction has not yet begun at a four-story, 76-unit multi-family building at 4701-15 Kingsessing Avenue in Cedar Park (alternately Squirrel Hill), Southwest Philadelphia. Designed by JKRP Architects, the development will span 67,070 square feet and hold 55 parking spaces, two of which will be ADA and van accessible, as well as one designated for car sharing. The project will also include ten bicycle spaces. Permits list Kingsessing Realty LLC as the owner, Equinox Management & Construction LLC as the contractor, and a construction cost of $8.5 million. 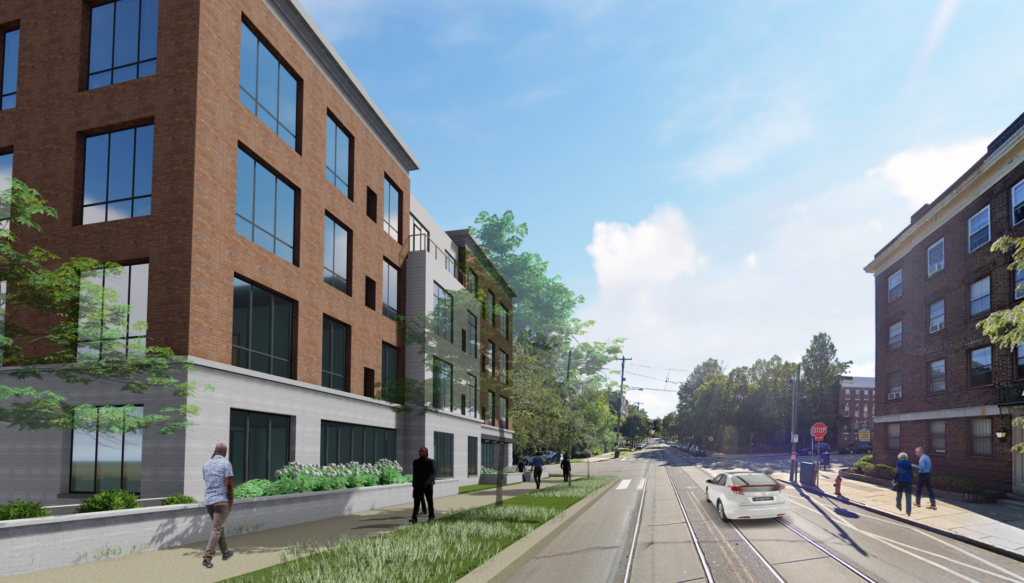 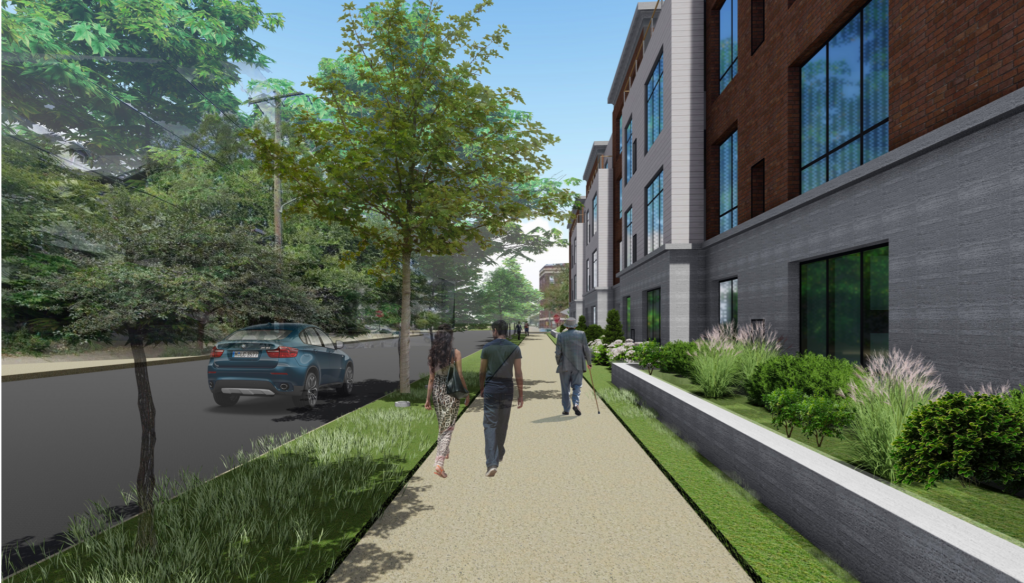 The development will rise on the block between South 47th and South 48th streets. The project will rise from an underutilized property that currently includes a private green space and a parking lot surrounded with a foreboding fence. In its place will rise an appealing structure that will embrace the pedestrian realm in a much more urbane manner and will exhibit traditionally-styled architecture that emulates prewar buildings that predominate throughout the surrounding area. 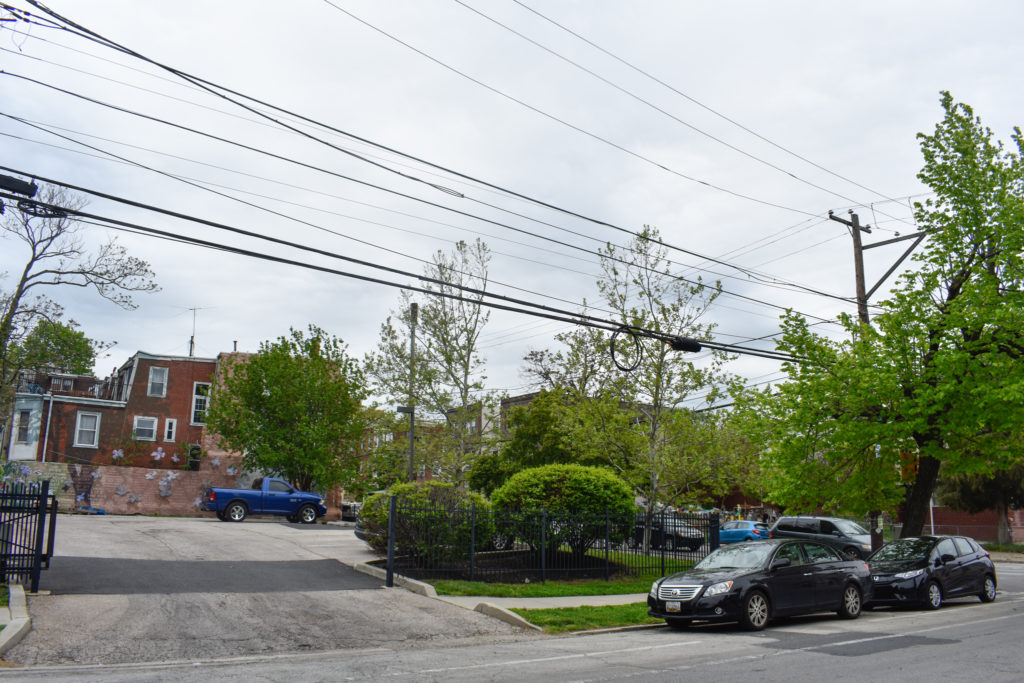 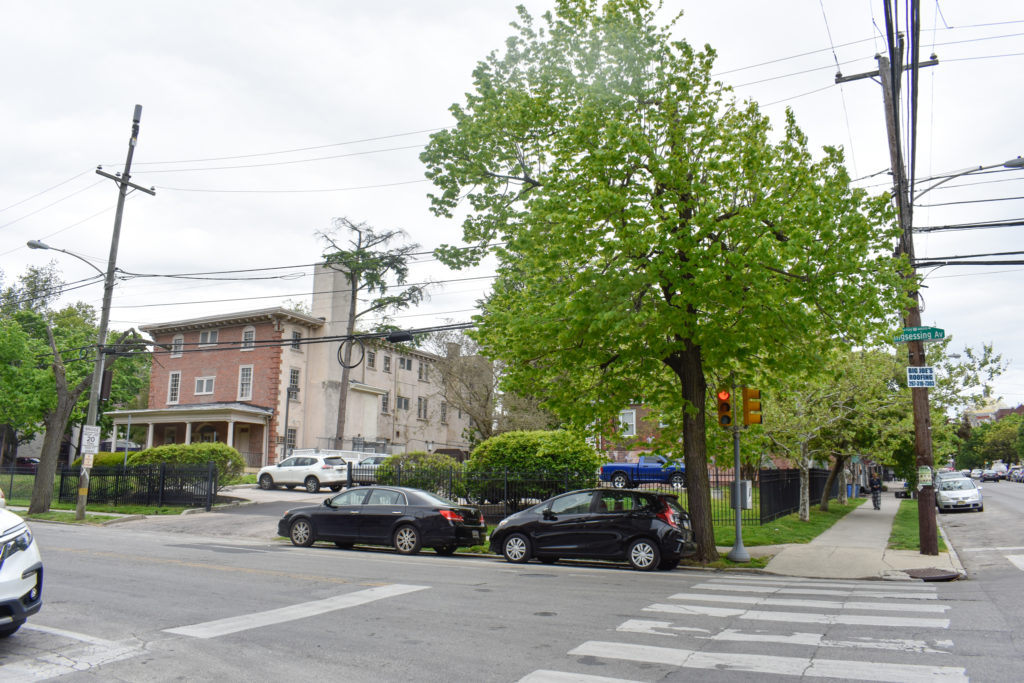 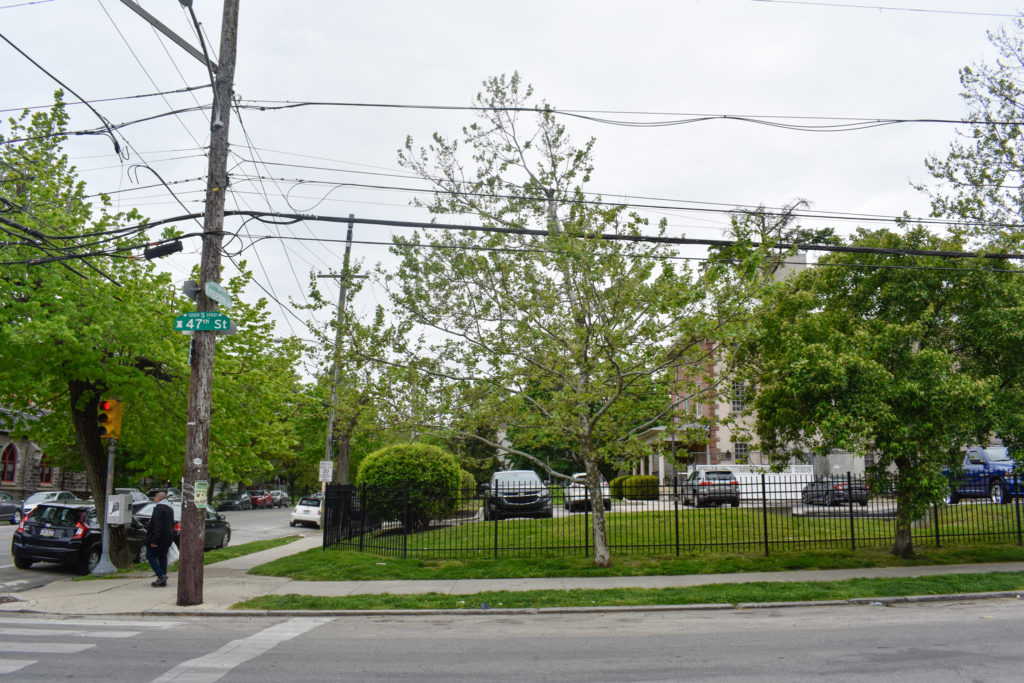 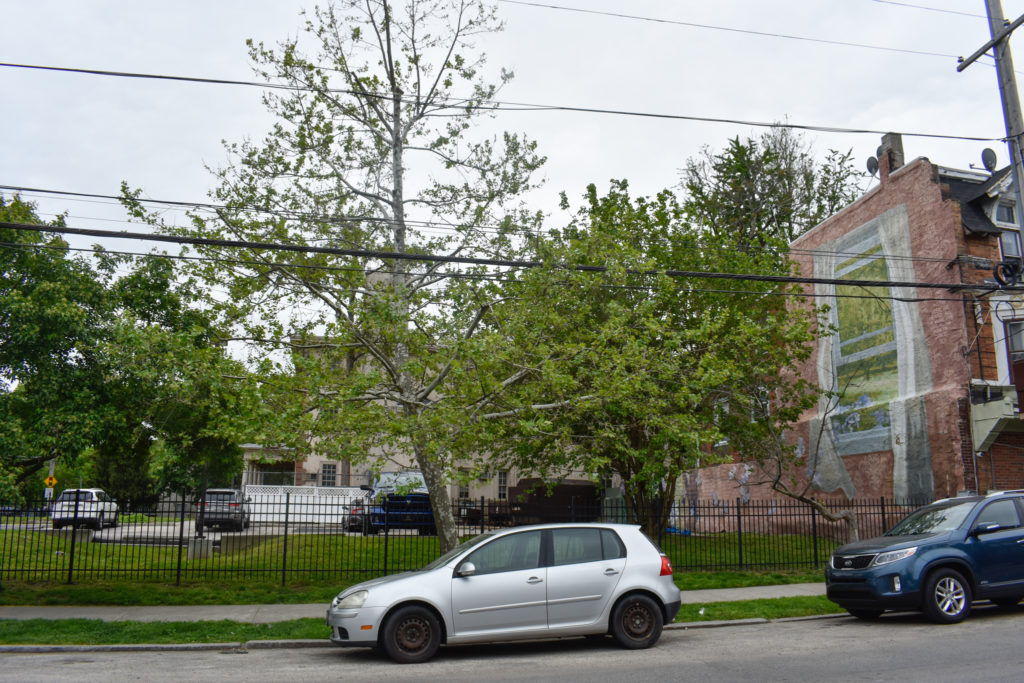 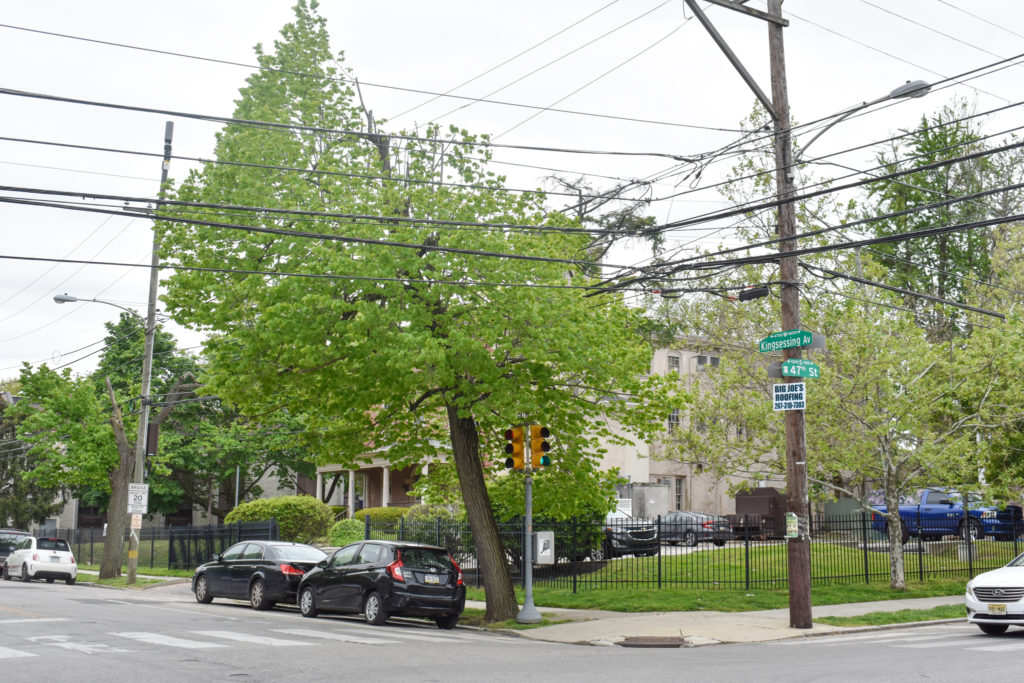 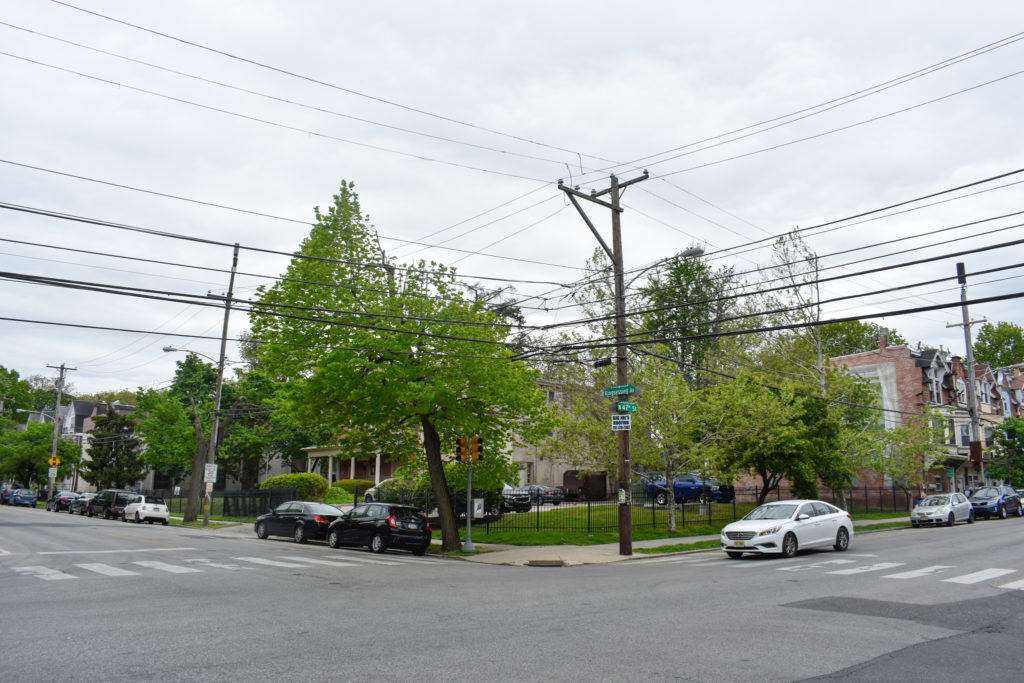 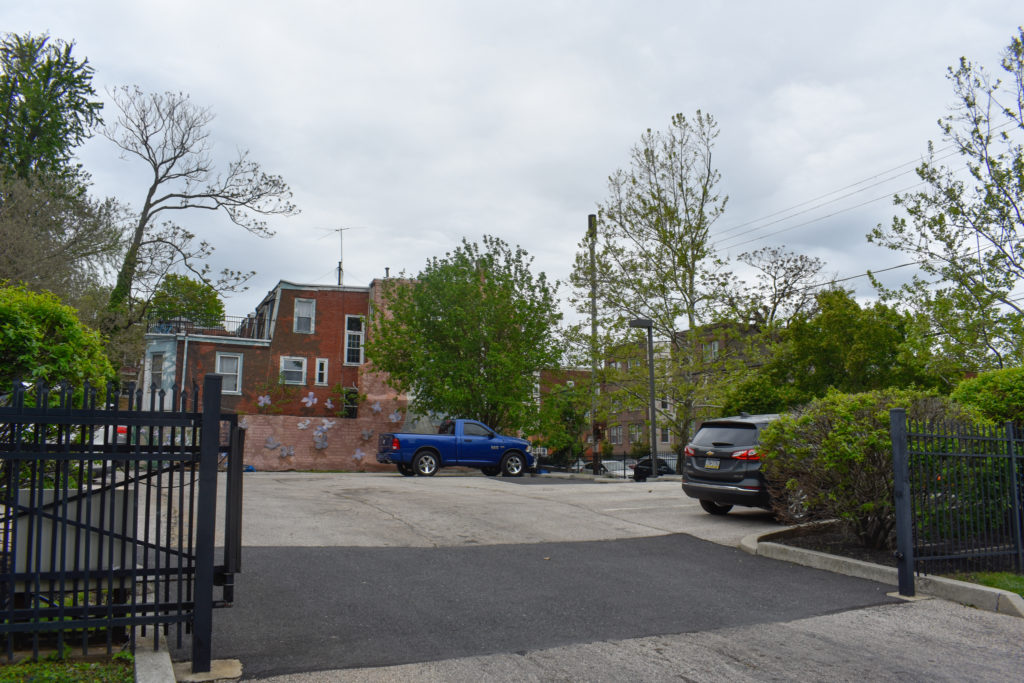 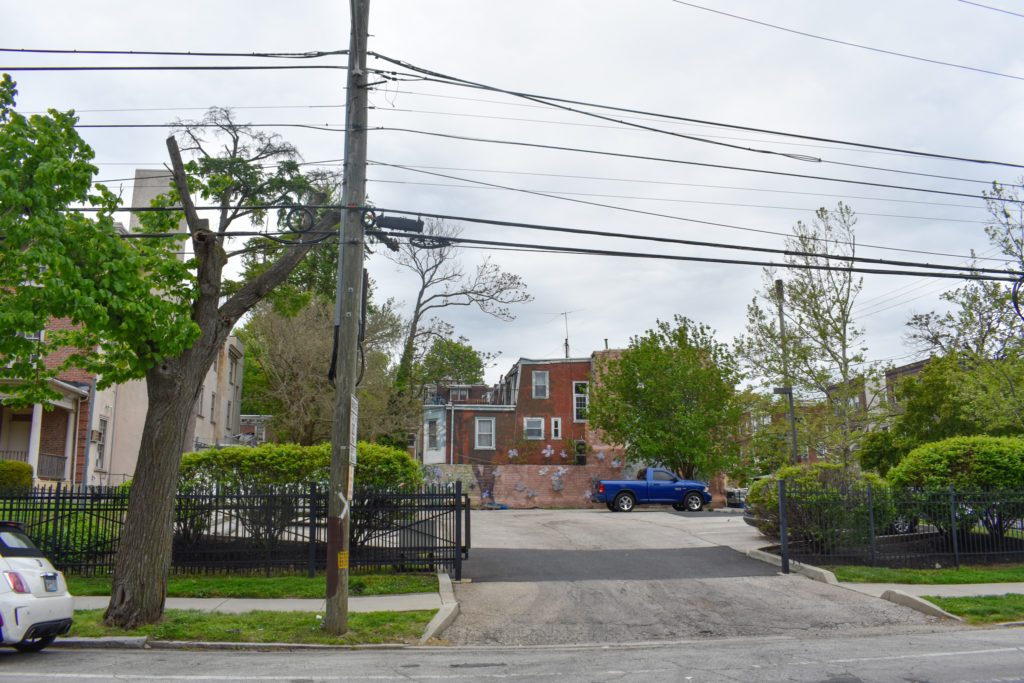 Permits have been issued in December of last year, though, as mentioned above, our recent site visit has shown that construction has not yet begun at the site. We look forward to construction of this development, as do local neighbors, as Cedar Park Neighbors, a local community organization has issued a statement of support for the development. Below is an excerpts from the lengthy statement.

“Cedar Park Neighbors (CPN) is proud to support the development of a new apartment building at the corner of 48th Street and Chester Avenue. This 76 unit apartment building will have 20% of the units (15) set aside as affordable (at 40% of the area median income) for a term of 50 years. The rents at this level would be in the range of $725 for a one‐bedroom apartment, and $870 for a two‐bedroom apartment.”

“CPN is well aware of the need for more affordable housing options in our neighborhood. It’s a complicated issue, and this project has raised a lot of issues and prompted very intense discussions. For CPN, however, the answer here is simpler than it may appear. The current proposal will provide 15 units of affordable housing in a neighborhood that desperately needs it. The other option, a by‐rights development, will provide 0 units. We feel that getting 15 truly affordable units, which will be deed restricted for 50 years, is a worthwhile goal.”

The statement then follows in a question-and-answer that dismantles potential anti-development arguments, as quoted below.

A. That would be nice. Unfortunately, although this site was used as a park for many years, it is not a public park – it is private property that was leased by a neighborhood dog park. The property owner terminated that lease in 2019, and now wishes to develop the site. He may develop this site in accordance with the current zoning, which would result in 14 twin duplexes – semi-detached buildings with 2 units per each side. These buildings would be 38’-0” high, with an additional 3’-6 to 4’-0” parapet wall and 10’-0” high pilot houses to access roof decks. From the ground, each unit could be 41’-6” to 42’-0” high, with projections to 48’-0” high. Each unit is required to have parking, so there would be a 20’-0” wide driveway on each 25’-0” wide lot, to reach garages on the front. Such a development would not need any neighborhood input, nor councilmanic approval. The owner has instead proposed an apartment building, for which he needs several zoning variances – a process in which neighborhood input is required. CPN and a number of near neighbors feel that this is our best, and frankly only, leverage to get a better project on this site – and we have successfully negotiated for 15 of the units to be dedicated as deeply affordable, renting to households with incomes between $26,480 and $37,800. In addition to responding to the neighborhood requests for affordable housing, the developer has made design changes in accordance with additional feedback by reducing the building height to 32’-0” high, with a rear section at 42’-0”; setting the building back from the sidewalk for greenery, and putting the planned green space on the 48th Street side rather than behind the building. The alternative to this building is a site with zero affordable housing, taller buildings, less street parking, and no common green space . With the development pressure in this neighborhood, and city-wide, the idea that this lot will remain vacant is simply wishful thinking.”

“Q. What does “area median income” mean? How does that translate into rents?

A. In the world of low-income housing financing, governments and banks use the area median income as their guideline for defining affordability. The defined area is often large, and unfortunately, for a city like Philadelphia, includes areas with much higher median incomes. The HUD defined AMI for Philadelphia is $94,500 for a family of four. Many city assistance programs base their affordability qualifications on 50% of AMI for a family of four ($47, 250), to be more in keeping with Philadelphia’s real needs. Our negotiations on this project have resulted in the owner committing to rents that are affordable by people earning 40% of the AMI, so this will result in more affordability than is required by many other programs. Rents are then based on what people at a certain percentage of the AMI can afford. In the case of this building, which will have one and two bedroom apartments, we should look at incomes for household sizes of 1-4. At 40% AMI, allowable incomes are as follows:

Rents are then based on spending not more than a set percentage of one’s income on housing –
normally 25% of net income.
https://www.huduser.gov/portal/datasets/il/il2021/2021summary.odn

Councilwoman Gauthier has completed a housing study for her district, including our
neighborhood, which further demonstrates the need for affordable housing – that study can be
found here: https://urbanspatial.github.io/3rdDistrictPlanning/#home”

“Q. Won’t this new building, with its higher rents, force rents up everywhere else in the
neighborhood?

A. Some people feel this could happen, but actual data on that is inconclusive. Market rate rents are just that – based on the local market, on the square footage of a dwelling unit, on the amenities offered in the apartment and in the building, and so on. The idea that rents will be automatically raised because of the presence of a new building is countered by the supply and demand argument -that a shortage of apartments in general drives up area rents, while adding to the supply of apartments eases that strain.”

“Q. Why can’t the entire building be affordable?

A. Most 100% affordable buildings rely on public subsidies – low income housing tax credits, local incentives, etc. In Pennsylvania, the 2021 low-income housing tax credit award for the entire state is projected to be $36,005,594, against requests totaling over $80 million dollars. The initial award for Philadelphia is set at $13.5 million, though that could increase slightly. The 2021 request in Philadelphia is for $22.9 million dollars. Other subsidy programs are similarly overstretched. 100% affordable housing by a private developer in this location is simply not an option; therefore, CPN is working to get as many affordable units as we can.”

“Q. Isn’t this building just contributing to gentrification in the neighborhood?

A. Both yes and no. Cedar Park is a very desirable neighborhood, and as new people come in and rent apartment or buy houses, prices go up. However, CPN feels that the by-rights proposal for this site would be a far greater contributor to unaffordability. There would be no affordability requirement, and the duplex units would be far larger and therefore more expensive than the apartments proposed. So providing even market rate apartments, at rent levels of $1,300-$2,200, with the bonus of 15 affordable units at rents from $725 to $870, is a better hedge against gentrification than duplex apartments or condominiums that would rent/sell for far more. By-right duplexes would also be considered comparable to the existing homes in the area, and would be more likely to increase the taxes on those homes.”

“Q. What about parking?

A. The developer has proposed 58 on-site parking spaces, and 23 spaces shared with the nursing home in order to meet parking requirements, set by the base zoning as one parking space per dwelling unit (76), plus spots for the nursing home (5). (It should be noted that, if the site were already zoned for multi-family use, the parking requirement would be 3 spots for every 10 units). The by-rights zoning for this site also requires one-to-one parking, and allows that parking to be front-loaded – meaning a driveway and garage on the front of every building. And because each building has two units, the driveway and garage must accommodate two cars side-by-side. As the illustration shows, this would eliminate street parking along the east side of 48th Street and the south side of Chester Avenue, so the net gain of parking spaces in a by-rights development is offset by the loss of public street parking.”