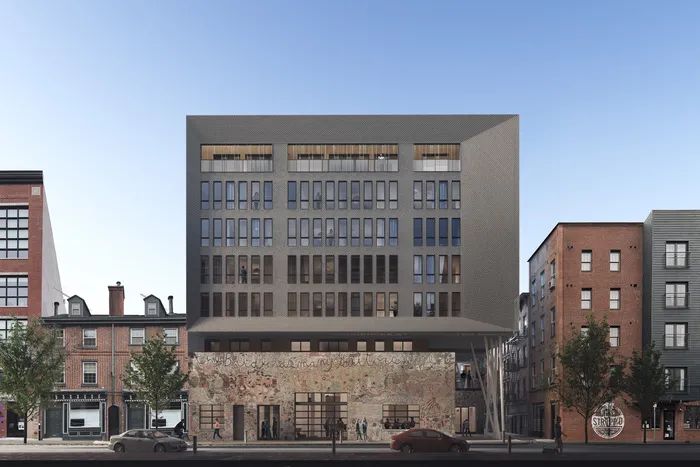 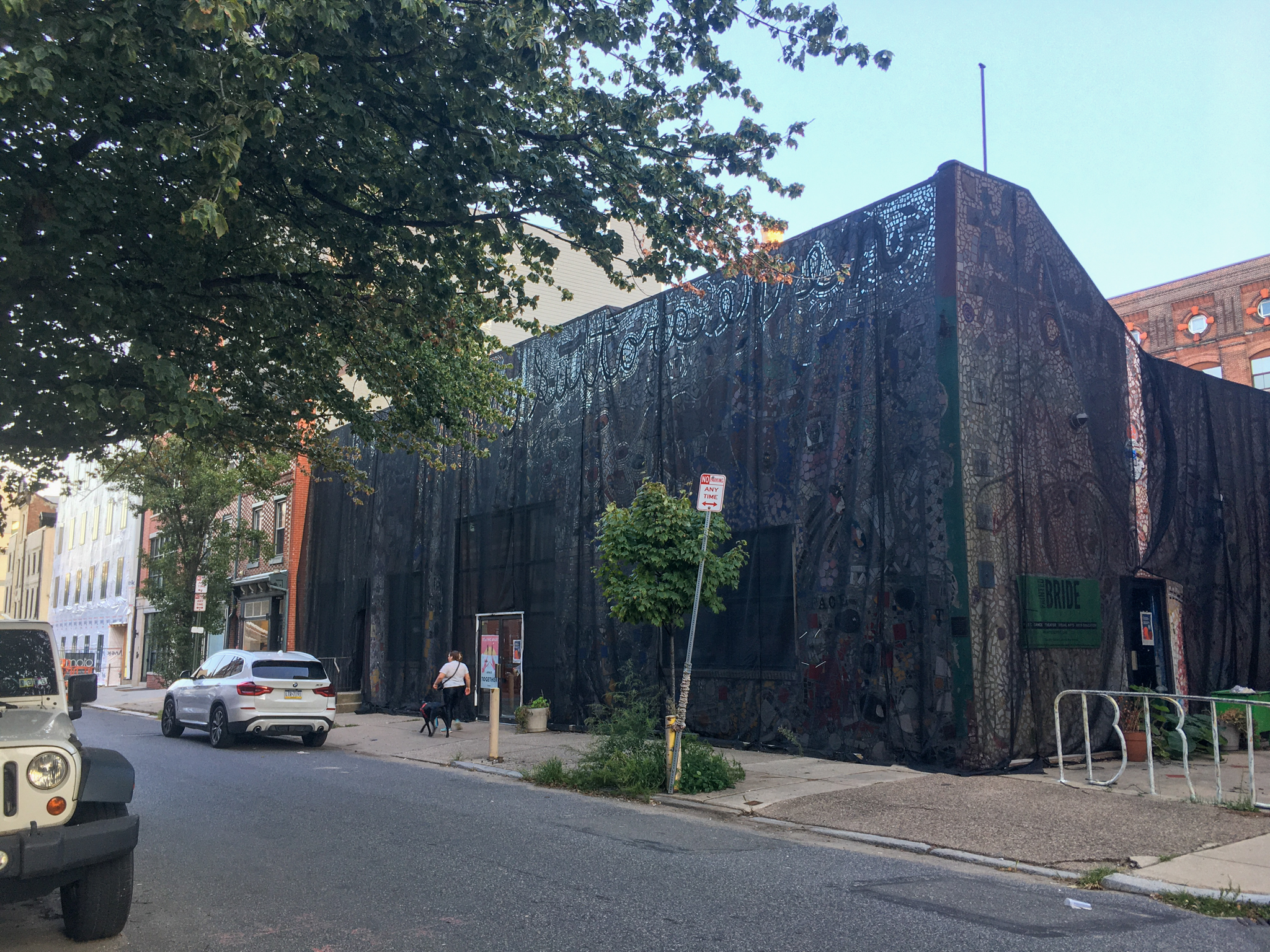 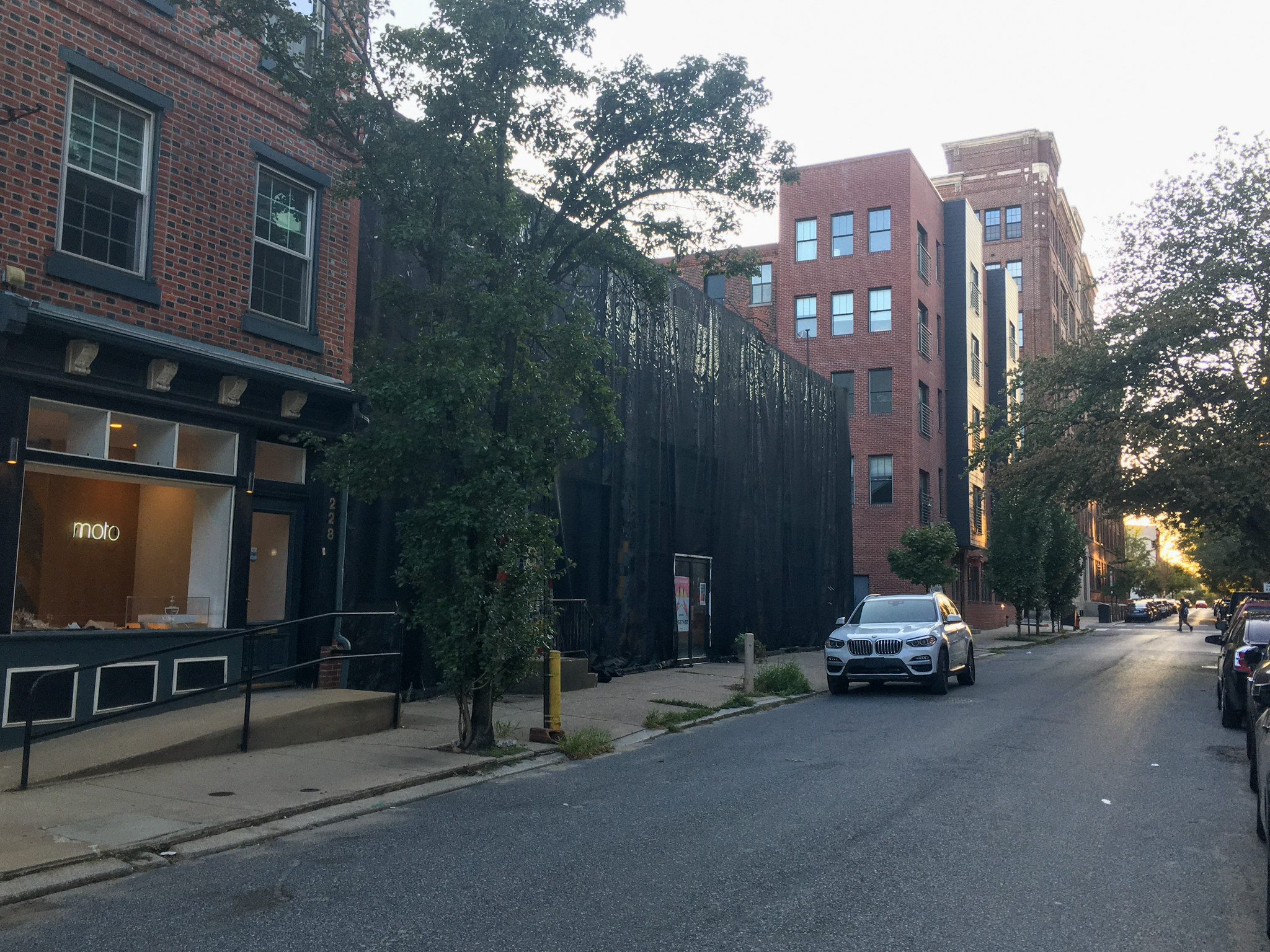 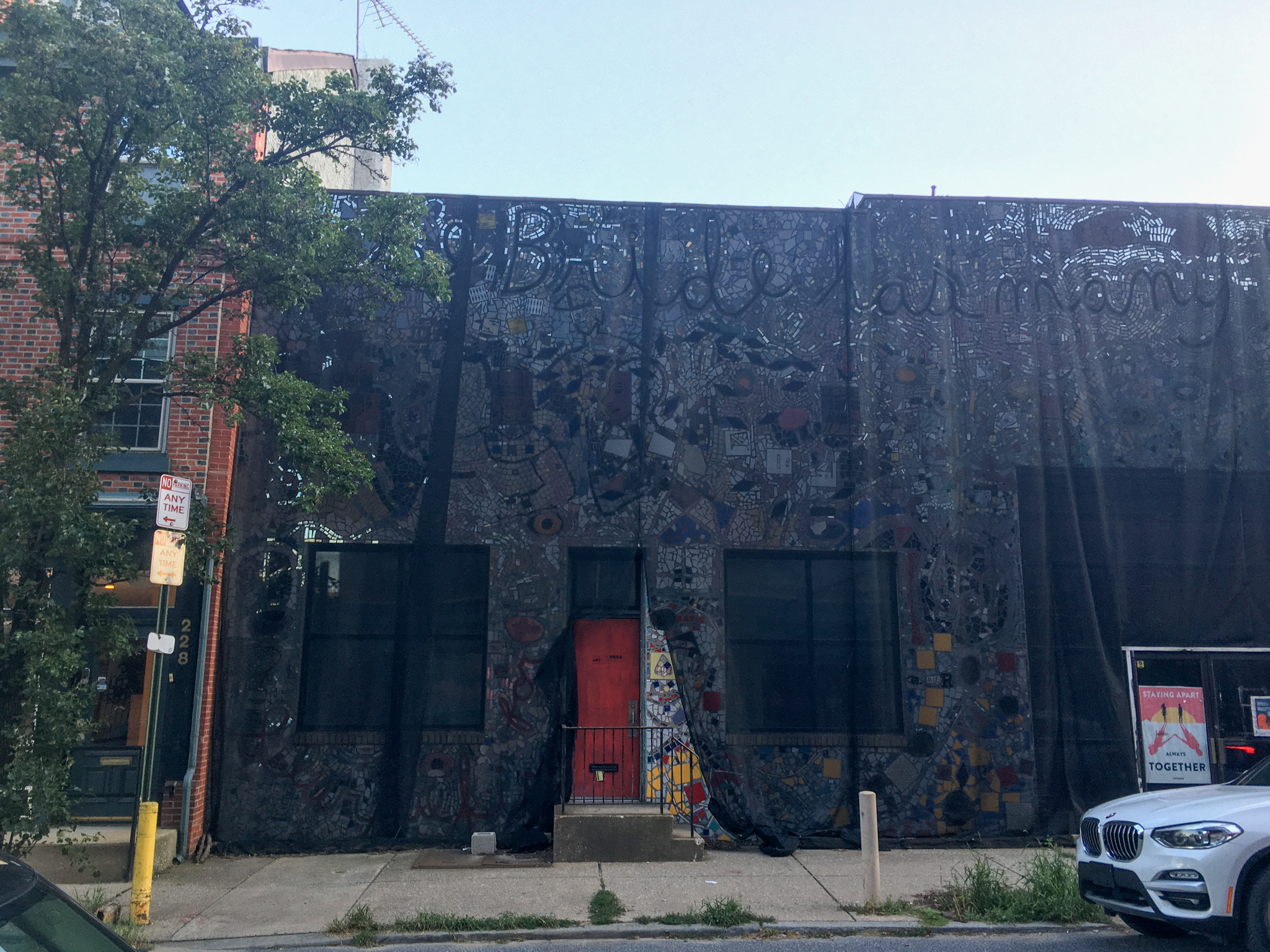 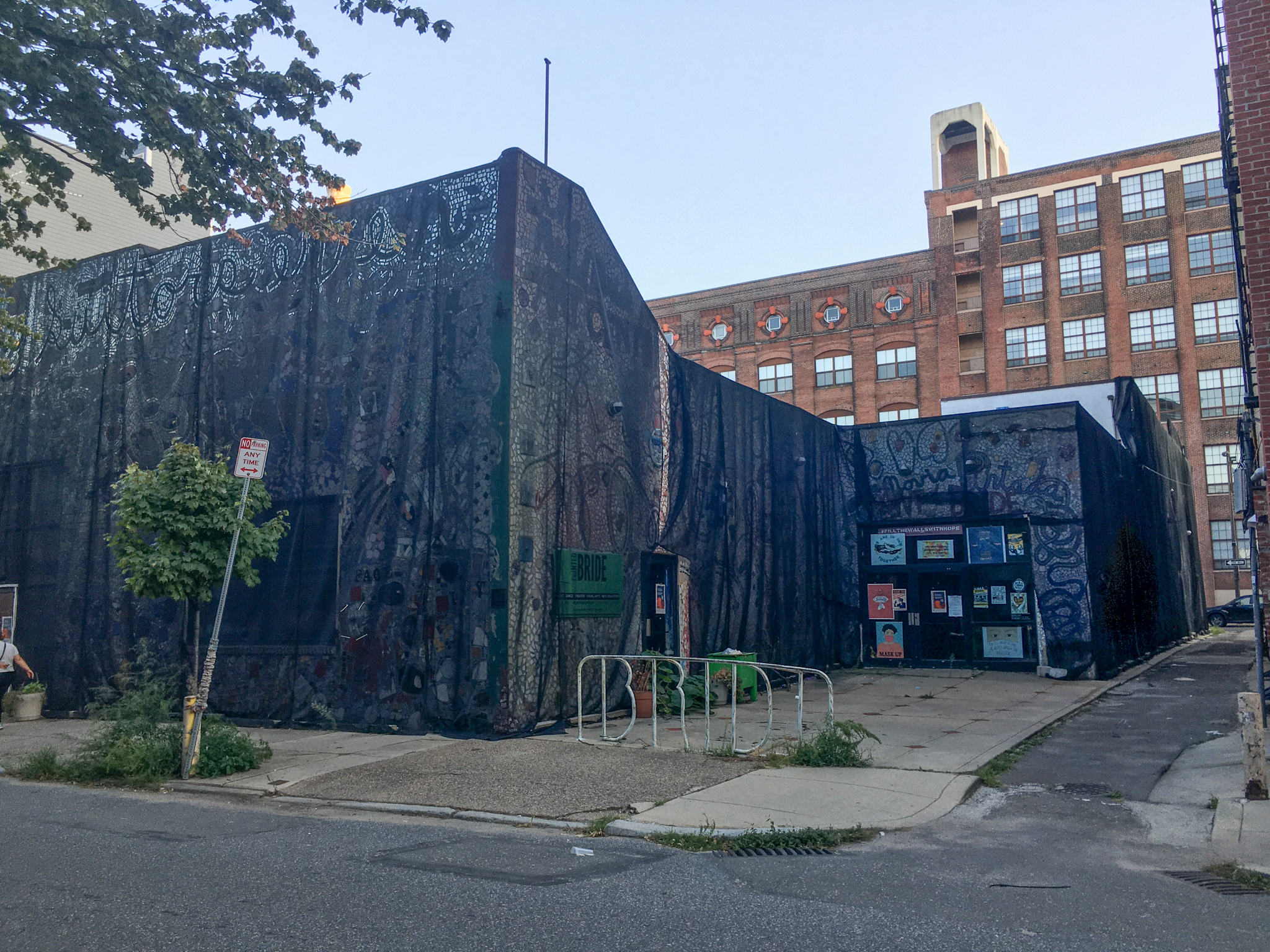 The Painted Bride Art Center is a gallery and performance space that was founded in 1969 and moved to its current Old City location in 1982. The official website describes the organization as one that is “committed to supporting artists, fostering diversity and inclusivity, and providing a safe and welcoming environment for artists, audiences and communities to explore the human experience and examine issues of social justice.”

While the venue has been a staple of the Philadelphia arts scene for over half a century, to the average pedestrian, its facility at 230 Vine Street is most notable for its colorful, playful 7,000-square-foot mosaic created by artist Isaiah Zagar. Zagar, aged 82 at the time of this writing (turning 83 on April 1st), is a Philadelphia-based artist best known for his phantasmagorical mosaics that adorn various sites throughout the city, including Magic Gardens on South Street. 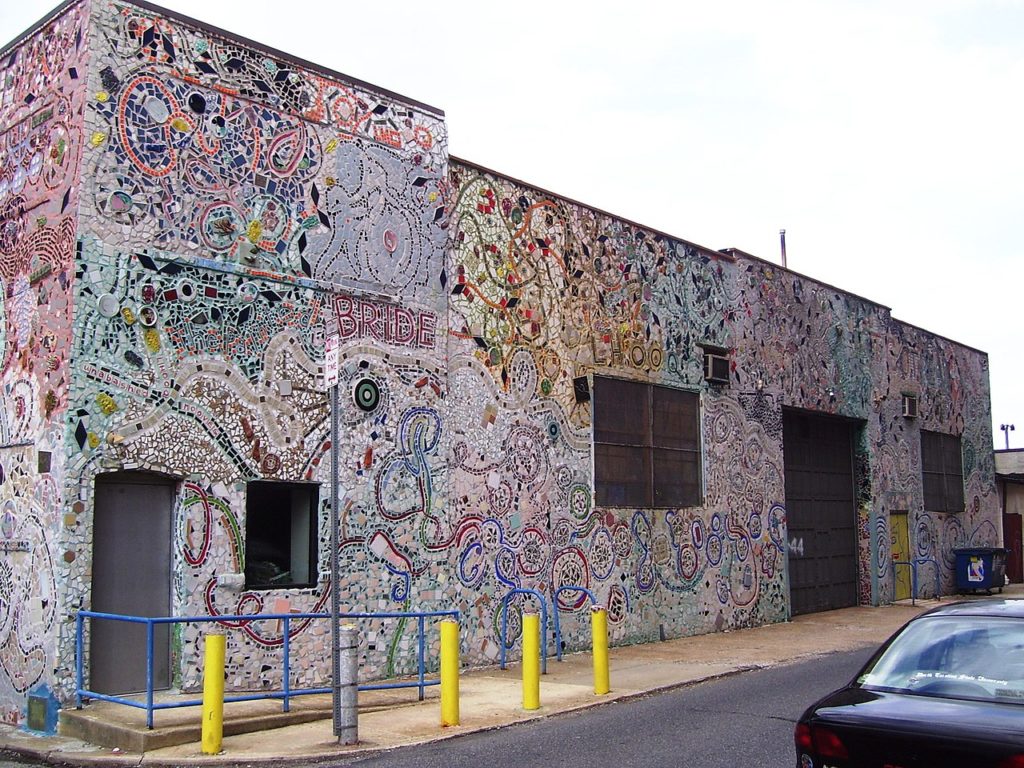 The Isaiah Zagar mosaic at Painted Bride Art Center at 230 Vine Street. Credit: Beyond My Ken via Wikipedia 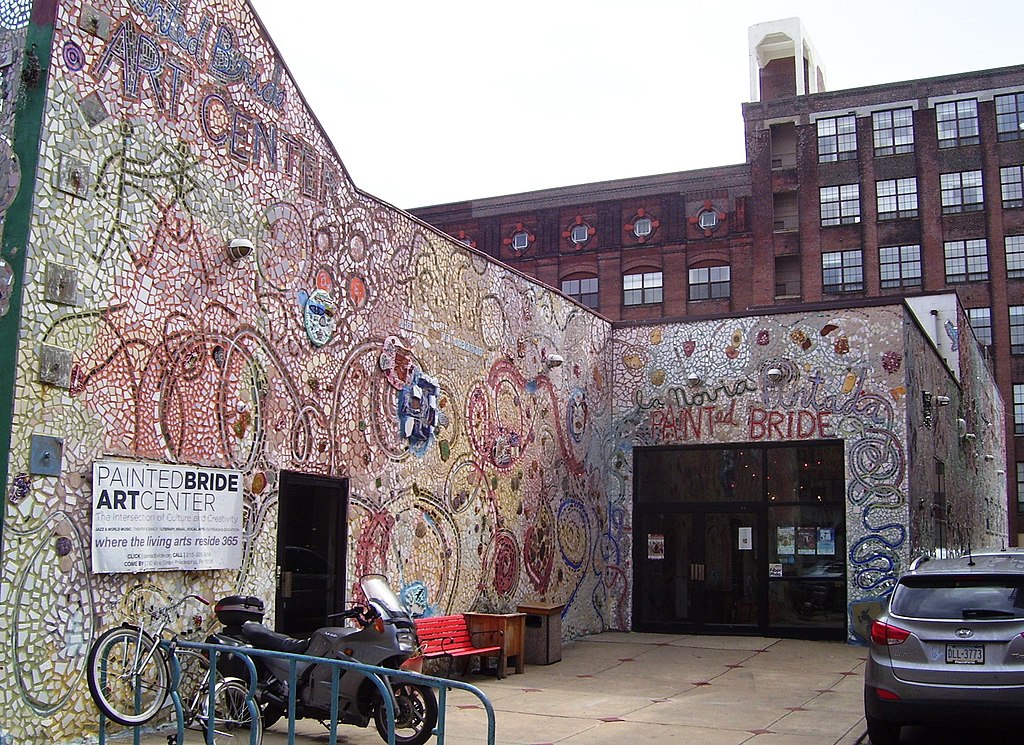 The Isaiah Zagar mosaic at Painted Bride Art Center at 230 Vine Street. Credit: Beyond My Ken via Wikipedia

In 2017, the building and its mosaic came under threat of destruction when the heads of the Art Center announced their intent to sell the building. The building itself would be demolished and replaced with a five-story, 16-unit condominium project that was planned to rise 65 feet tall, span 54,000 square feet, and include 16 parking spaces and a roof deck. According to the Center’s representatives, the sale would be used to fund the venue’s affiliated artists and art programs. At the time, executive director Laurel Raczka shared the following as part of a statement:

“We are imagining a future that gives us the financial and creative capacity to continue our important work. We will do this by selling our primary asset – our building at 230 Vine Street – in order to secure a flexible source of capital for investment. With the proceeds of the building sale, we will ensure that the Bride can fulfill its central mission – supporting artists.”

The proposal came under fire from numerous directions, including preservationists, neighbors, and art aficionados. While YIMBY is typically wary of development obstructionism, especially when non-historic buildings are involved (in 2018, the Historical Commission voted against granting a historic designation to the building at 230 Vine Street). However, in this case we could see the merit in opposing the development, especially when an obvious, and oft-advocated by Philly YIMBY, solution has been there all along: preserve the existing building’s exterior and build the new development above.

Fortunately, this is precisely the course of development the project team settled for. After discussions with preservation proponents, architect and developer Shimi Zakin of Atrium Design Group released a plan that incorporates the existing building and its mosaic as the base for a 64-unit apartment building.

Leaving the street-facing mosaic intact, the proposal would renovate the interior portion of a building and raise its total height to seven stories and 85 feet, 20 feet above the district’s existing zoning limit. Preserving the integrity of the original facade, the vertical extension is articulated as an independent object, where a rectangular mass is “suspended” via a discreet reveal above the original roof line and perches on angled columns at the corner. 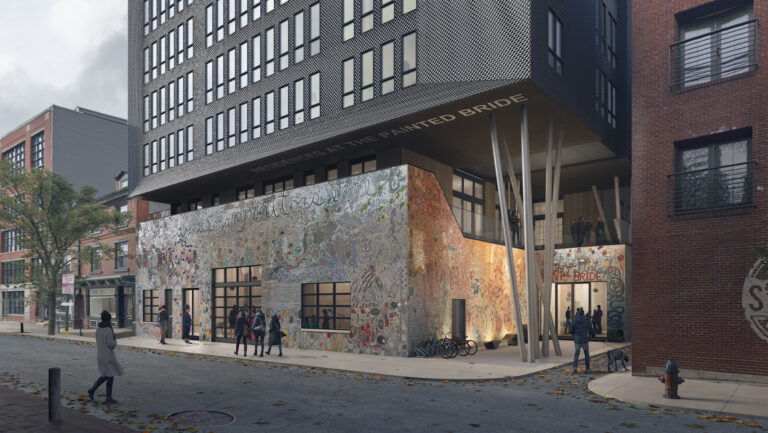 Further strengthening the addition’s sculptural appearance is a chamfered street-facing facade, where a regular grid of narrow windows, with a loggia at the pinnacle, is set within a picture frame-like surround. Although the vertical addition appears solid from the street, its interior would feature a courtyard that would allow for slim, light-filled floor plates while offering an elevated green space for the residents. 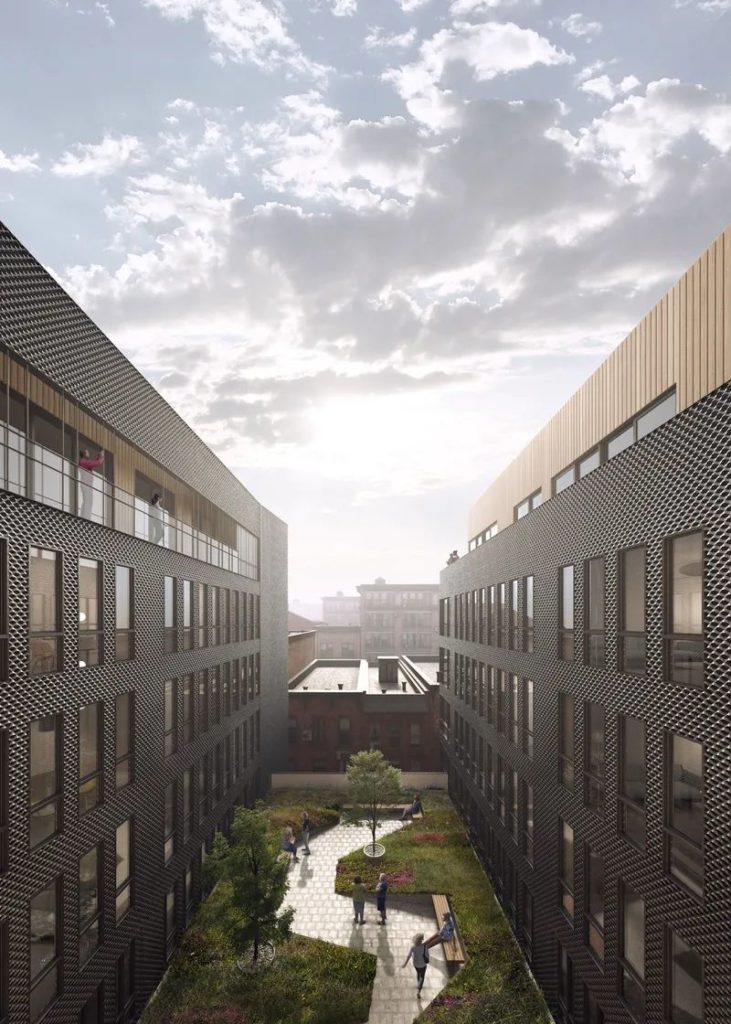 According to an Inquirer report from late 2021, the resolution generated a good deal of mirth both from the project backers and the artist himself. The report quotes Zakin calling the project “an amazing collaboration between art and architecture, art and development” and expressed delight that “the city is seeing eye to eye with us on this great design.” Reportedly, Zagar, the artist, was “screaming with happiness” about initially hearing the news and said that “now we need to work.” Emily Smith, executive director of the nonprofit arts group Philadelphia’s Magic Gardens, is quoted saying that the proposal “makes so much sense” and “feels like such a relief.”

All of these positive benefits would be feasible only with zoning variances that would allow the structure to extend above the current height limit. However, certain local groups have already launched a not-in-my-back-yard campaign and call for a reversion to a low-rise, lower-density townhouse plan.

Namely, opposition lawyers allegedly argue that “alternative, shorter designs could also preserve the mosaic, such as townhouses behind a freestanding mural.” However, they fail to address how a townhouse enclave could possibly be laid out upon a tight site hemmed in by largely solid wall on three sides.

The existing building, which rises around 20 feet high, is ideally suited to be re-purposed as a base for a mid-rise development, where it can hold commercial space, a tall-ceiled lobby and amenities, or service functions. Apartments would rise above, unimpeded by the existing wall.

By contrast, townhouses are, by definition, a low-rise typology that must have windows on the lower floors. However, placing townhouses at the site would either require grafting them into the near-windowless existing wall, possibly cutting apertures into the endangered mosaic, or placing them behind the wall altogether, which would preserve the artistic artifact but block the lion’s share of sunlight and views for the houses’ crucially important two lower floors.

In other words, unless we are missing some absolutely ingenious and possibly physics-defying solution, the combination of townhouses and mosaic preservation simply does not work in any realistic way. Stating otherwise, especially without offering any specifics on the suggested design approach, shows either a fundamental lack of understanding of basic design principles, or wishful thinking that it will all work out somehow if they insist on it strongly enough.

While we sympathize with the original push to preserve the existing exterior, at this point, any opposition to the project would be pure obstructionism, where marginal (arguably negligible) benefit to the neighborhood’s built fabric would be eked out at the expense of funds for the Arts Center, housing supply, distinctive architecture, and possibly even the mosaic itself, which once again may face the wrecking ball if a shorter vertical extension would be deemed infeasible.

A zoning permit has been issued for the development in August of last year, though our most recent site visit revealed no progress at the site as of yet. However, we look forward to further development at this project that exemplifies what could be achieved through careful design that incorporates the positive aspects of an existing structure with new construction.