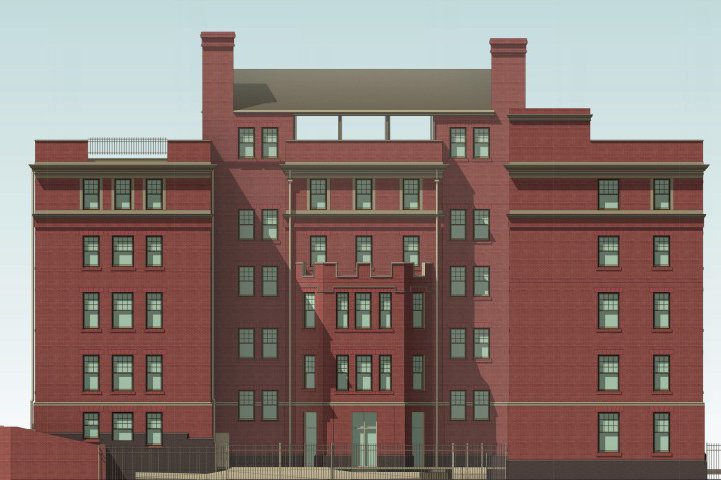 Recently Philadelphia YIMBY visited the site of a new 56-unit Project HOME assisted residential facility under renovation at 115 East Huntingdon Street at the Temple University Campus Episcopal Campus in West Kensington. The development is part of Temple University Hospital’s ongoing effort to create over 1,000 affordable supported-living residences for persons that have experienced homelessness, mental illnesses, substance abuse, and other issues. The project team consists of Cecil Baker + Partners Architects as the designer, Temple University Hospital’s Project HOME as the owner/developer, and T. N. Ward Company as the contractor. Construction costs are specified at $14.9 million. In the previous article we focused on the project’s social mission and its financial backers, which include musician Jon Bon Jovi. Today we look at the architectural and technical aspects of the massive, five-story renovation project.

A recent site visit by Philadelphia YIMBY has revealed that renovation work is underway at 115 East Huntingdon Street in West Kensington, where a five-story prewar building is being converted into a 56-unit mixed-use development, which is part of Project HOME, a nonprofit organization that provides housing and support services to socially vulnerable populations. Located on the Episcopal Campus of the Temple University Hospital, the development will offer two elevators, full sprinkling, and support staff. Permits list a project team of Cecil Baker + Partners Architects as the designer, the hospital’s Project HOME as the owner/developer, and T. N. Ward Company as the contractor. Construction costs are specified at $14.9 million.

Permits have been issued for a 54-unit multi-family development at 115 East Huntingdon Street in West Kensington. The development will consist of a complete renovation of an existing five-story prewar structure. The 46,811-square-foot project will cost an estimated $14.9 million to build.