The iconic Philadelphia skyline has dramatically expanded since the completion of One Liberty Place in 1987. Philly YIMBY presents exclusive massing renderings of the 1987 skyline, reflecting the beginning of a period that saw rapid development in Center City.

At the time, cladding work was nearing completion at One Liberty Place, the tallest skyscraper on the massing model, and lighting has been turned on. Designed by Murphy/Jahn and developed by Rouse and Associates, the tower is the centerpiece of a development that would eventually include a hotel, a mall, and second skyscraper. The building broke through the long-held 548-foot height limit set by the “Gentlemen’s Agreement” that prevented buildings from rising above City Hall, and many local figures opposed the tower’s construction.

The second tallest skyscraper at the time was the 565-foot-tall One Commerce Square, located four blocks to the west of One Liberty Place. The 41-story tower had topped out by the time One Liberty was still ascending into the skyline, and opened on October 23, 1987. Designed by I.M. Pei Architects and developed by Maguire Thomas Partners, the high-rise is a part of a twin tower complex, where the second tower was put on hold until 1990 when Conrail signed to lease space in the skyscraper.

The rest of the towers stand below City Hall’s pinnacle, topped by a 37-foot-tall statue of William Penn, the founder of the Commonwealth of Pennsylvania. From 1985 to 1990, scaffolding covered the top of the structure, as a a renovation replaced rotting wood with new steel, reinforcing the historic structure. Some of the most notable skyscrapers to stand below the height of City Hall are the 500-foot-tall 1818 Market Street, the 491-foot-tall PSFS Building (794 feet to the top of the antenna), the 491-foot One Meridian Plaza (demolished by the end of 1999), the 482-foot-tall Philadelphia National Bank Building (aka One South Broad Street), and the 384-foot-tall PECO Building at 2301 Market Street. 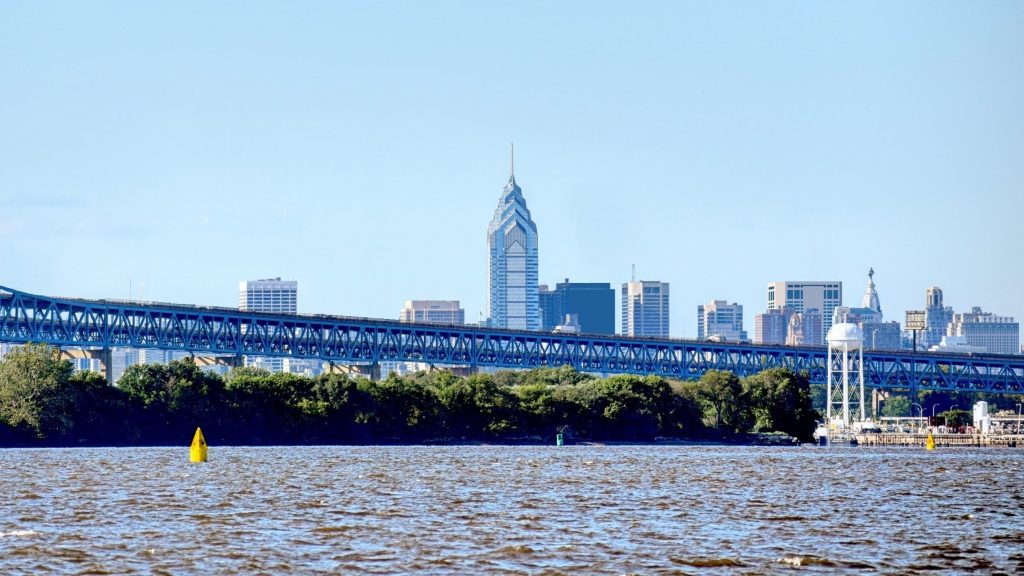 The Philadelphia skyline as it would have been seen from New Jersey in 1987. Photo and edit by Thomas Koloski