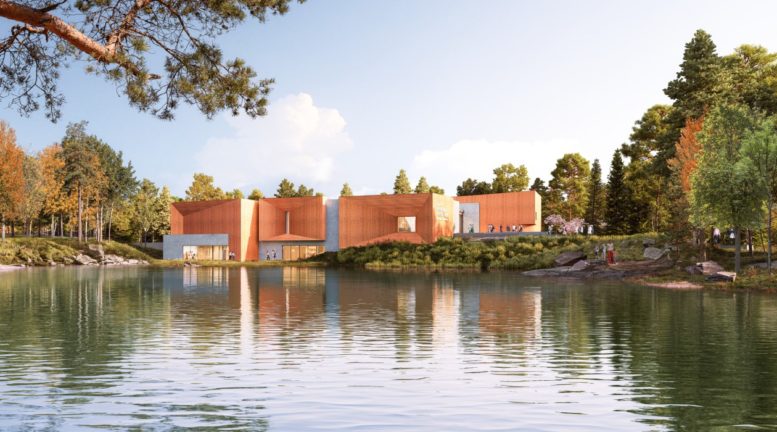 One of the most exciting new developments in the greater Philadelphia metropolitan area is currently underway not in the city itself, but rather in an exurban part of Mantua Township, New Jersey, 14 miles to the south of Center City Philadelphia. Designed by Ennead Architects, with KSS Architects as the architect of record and Gallagher & Associates behind exhibit design, Rowan University’s Jean & Ric Edelman Fossil Park and Museum rises from a scenic bluff overlooking a former marl quarry, which holds 66-million-year-old fossils dating to the age of dinosaurs. The $73 million visitor center, avant-garde in design yet naturalistic in material palette and setting, will offer 44,000 square feet of interactive exhibits, presentation space, socializing areas, and more. 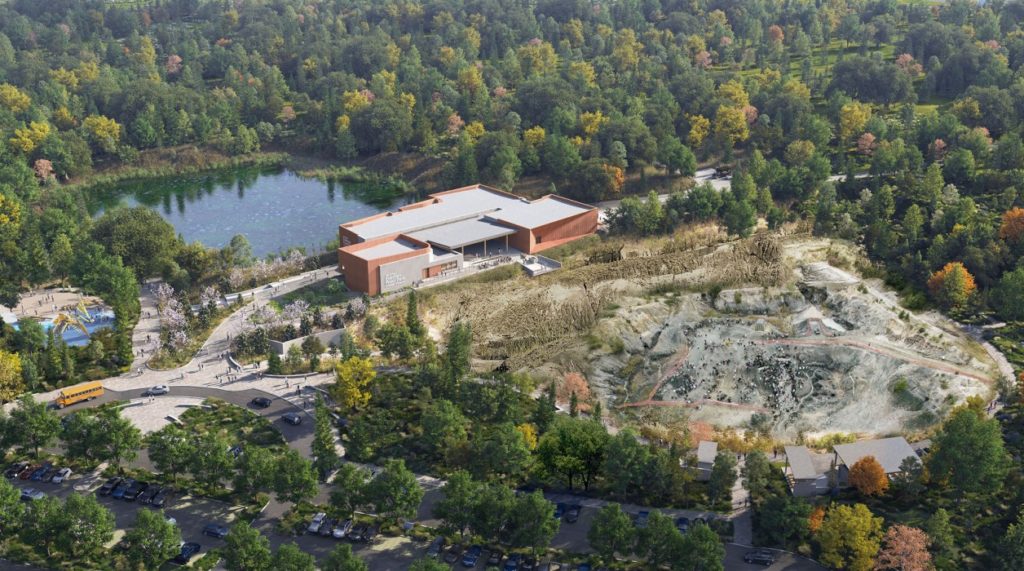 The fossils at the site, described as one of “global importance” by Dr. Kenneth Lacovara, founding dean of Rowan’s School of Earth & Environment and director of the Jean & Ric Edelman Fossil Park, date to the Cretaceous Period. The era is notable for the fifth global mass extinction, when three-quarters of all species, and virtually all the dinosaurs (except for the few such as ancestors of modern birds), went extinct, and the evolutionary path pivoted toward its millions-year-long “modern era.”

The former quarry preserves ample evidence of both marine and terrestrial life that once inhabited the greater Philly area in this mind-boggingly ancient period. The quarry, part of a 65-acre property, remains an active archaeological site, and its cornucopia of fossils is plentiful enough to offer hands-on experience even to casual visitors, children and adults alike. 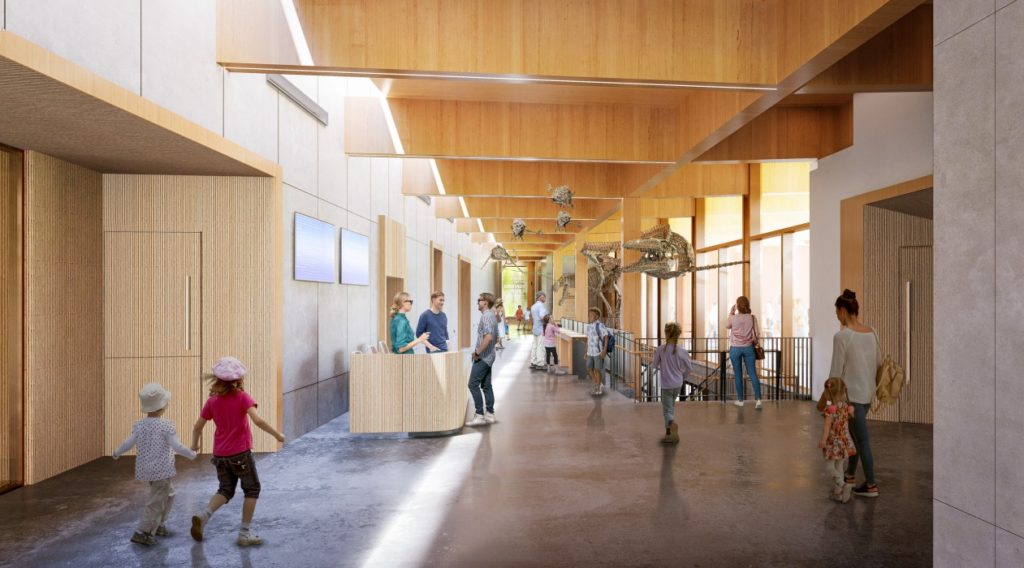 As par for the course for any archaeological site, a healthy dose of imagination is required to bring to life the blueprint that excavated remains offer for a prior era; the museum at Edelman Fossil Park will offer inspiration in spades. According to Rowan University, the facility will boast “immersive exhibits galleries, full-scale reconstructions of extinct creatures, hands-on learning experiences, live animal attractions, virtual reality, connections to the natural world, and gathering spaces to build community around the themes of exploration, discovery, and responsible stewardship of our planet.”

The site itself, nestled in a wooded area between the quarry and a lake, invites a flight of imagination. Evidently, the architects made full use of the context to craft an engaging building. The museum is articulated as a series of interlocking rectangular shapes composed of timber and concrete, tactile materials that evoke the wood and stone of the surrounding landscape.

Facing the lake will be a series of chamfered rectangular volumes with apertures of varying sizes, as playful and organic as any natural formation that may be found on the lake shore. Similar elements are also present on the quarry-facing side, though here the emphasis is made on public engagement and recognition via prominent signage, as well as via an inviting, open terrace.

Furthermore, the museum must be noted for its exceptional array of environmentally-friendly features. The facility will feature geothermal heating and cooling, as well as a solar panel array. The museum will rank as the largest public net-zero building in the state, while the grounds will restore local natural habitats.

As children, many of us went through moments of intense, formative inspiration when we delved into the delightful worlds of nature, archaeology, dinosaurs, architecture, or any combination thereof. The Jean & Ric Edelman Fossil Park and Museum promises to offer these exhilarating experiences to adults and the growing generation alike, within a 20-minute drive from the Ben Franklin Bridge.