Renovation work at the Terrace on 18th Street at 1776 Benjamin Franklin Parkway in Logan Square, Center City, is nearing completion, as the retail space in the eastern portion of the building looks nearly finished. Designed by Oskar Stonorov of Korman Co., the original structure was built in 1963 as an apartment building known as The Plaza. The tower, which stands 267 feet and 27 stories tall, was converted into the Embassy Suites by Hilton Philadelphia Center City in the 1980s. The structure has been under the ownership of Pearl Properties since last year.

In the previous update on the conversion, key details of work were being finished as the final stone cladding for the podium was being installed. The cladding was also visible at the second floor of the three-story podium, as the top floor had primer on the structure for the future installation of the stone cladding. One of the banners was coming off of the building, which at the time we thought was in preparation for the opening.

In a recent visit to the building, YIMBY observed that the banner has been hung back at the building’s west side. The signage for The Terrace On 18th Street has been installed onto the building two stories above the podium on the east and west sides, where above the logo will light up green at night. Cladding at the podium appears to be nearing completion, with the new stone covering the north and east side of the podium. Along with the stone, glass has been installed along the Parkway for the future space that will house Victory Brewing Company and Federal Donuts. 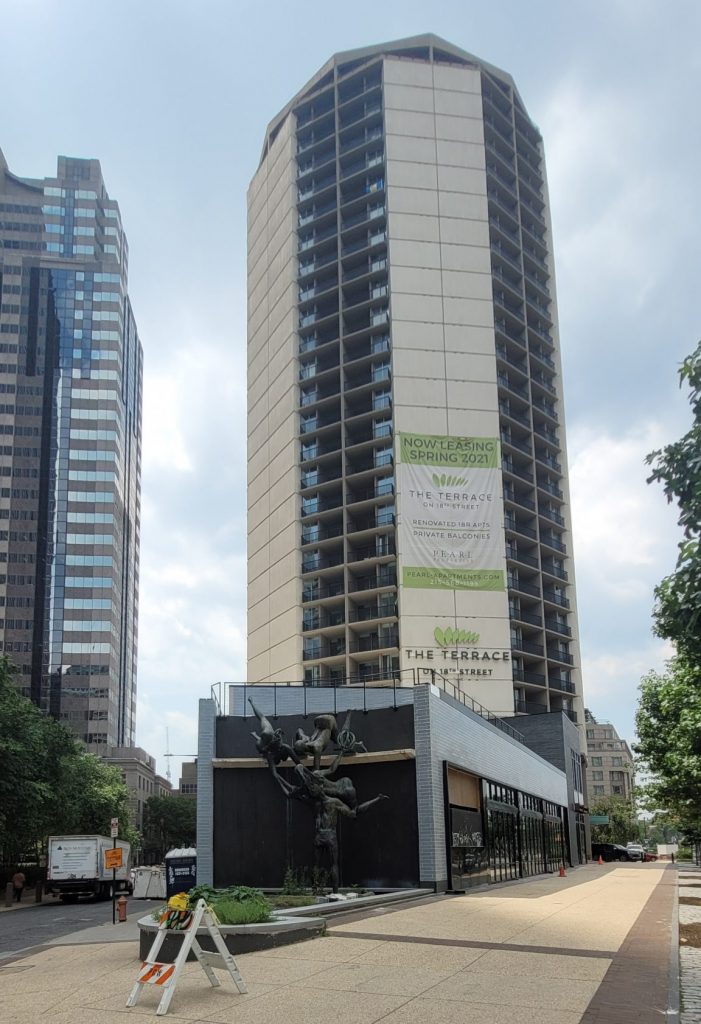 The residential portion of the building opened in June, while the retail space will open in late summer or fall.