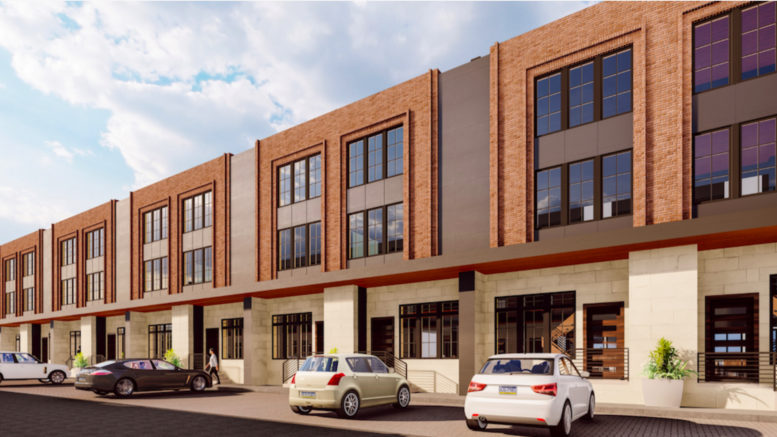 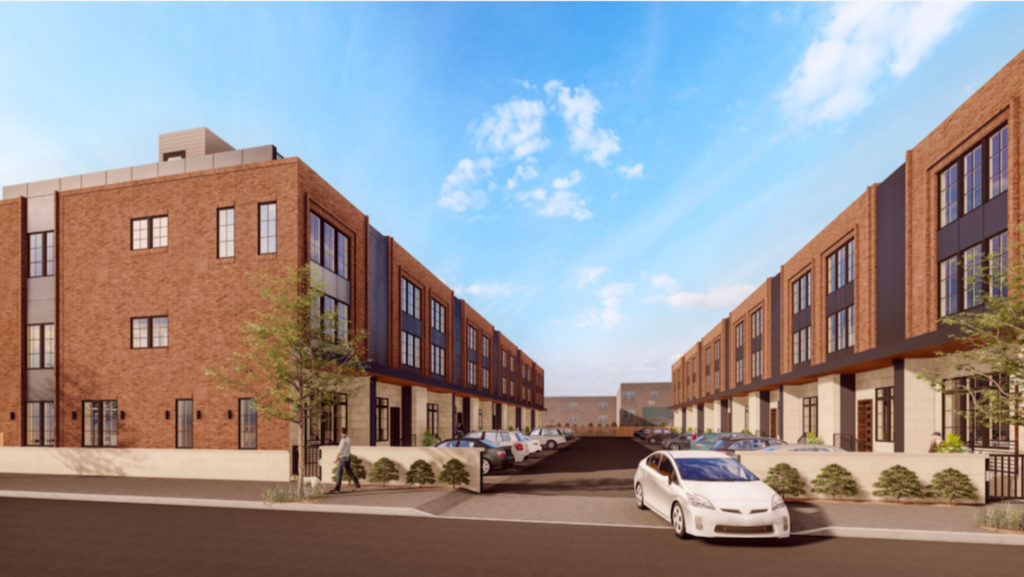 The new homes will feature modern exteriors while also taking cues of the neighborhood’s industrial heritage, which is a trademark of the area’s past. Most notable is the usage of brick, which will form a rectangular frame around windows on the upper two floors. Here, small brick abutments can be observed, in rows and columns, adding detail and components to an otherwise level street wall. Between these metal frames, rows of three adjacent industrial-styled windows will be installed, separated by dark gray cladding between floors which nicely complements the neighboring brickwork. Each home will see the inclusion of these windows on the upper floors. This same gray cladding will also be used between every other home to help create a more defined separation between each individual residence. 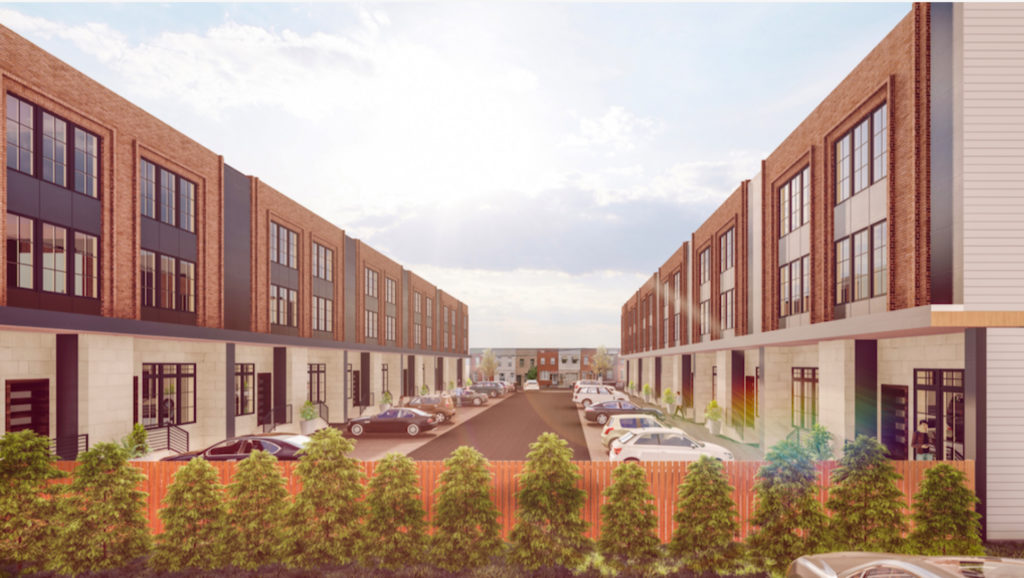 At the ground floor, the designers opted for a more traditional approach to creating a welcoming entryway with the use of tan stone. Although used in a modern way, this inclusion provides a stately element to the home designs. Dark wooden doorways will provide ingress to the homes, while more industrial styled windows will grant access for natural light to reach ground floor interiors.

Unfortunately, despite this effort to create a strong street presence, the new homes will not necessarily be fronting a typical street by South Philadelphia standards. Developers opted for the more modern inclusion of a drive aisle which successfully cuts the development in half, and it will be lined by perpendicular surface parking spaces. Given the density of the surrounding neighborhood and value of land, this is a somewhat questionable usage of key property space, but will likely be an important feature for the sale of the homes. 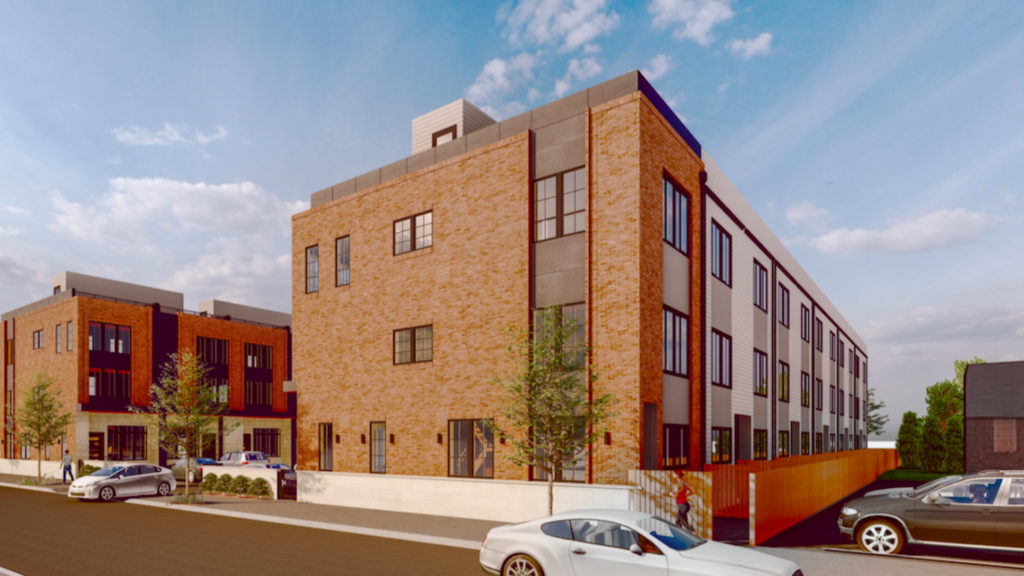 However, we praise the use of brick on all three stories on the western facade of the rows. While other developments throughout the city are often quick to abandon the brickwork on side walls due to the elevated construction costs, at 2616 South 18th Street designers held firm and included these materials throughout the project which allows the development to offer a much smoother transition into the surrounding neighborhood. Street trees will also be included in this location which will add to what is arguably the best neighborhood tree canopy in South Philly. 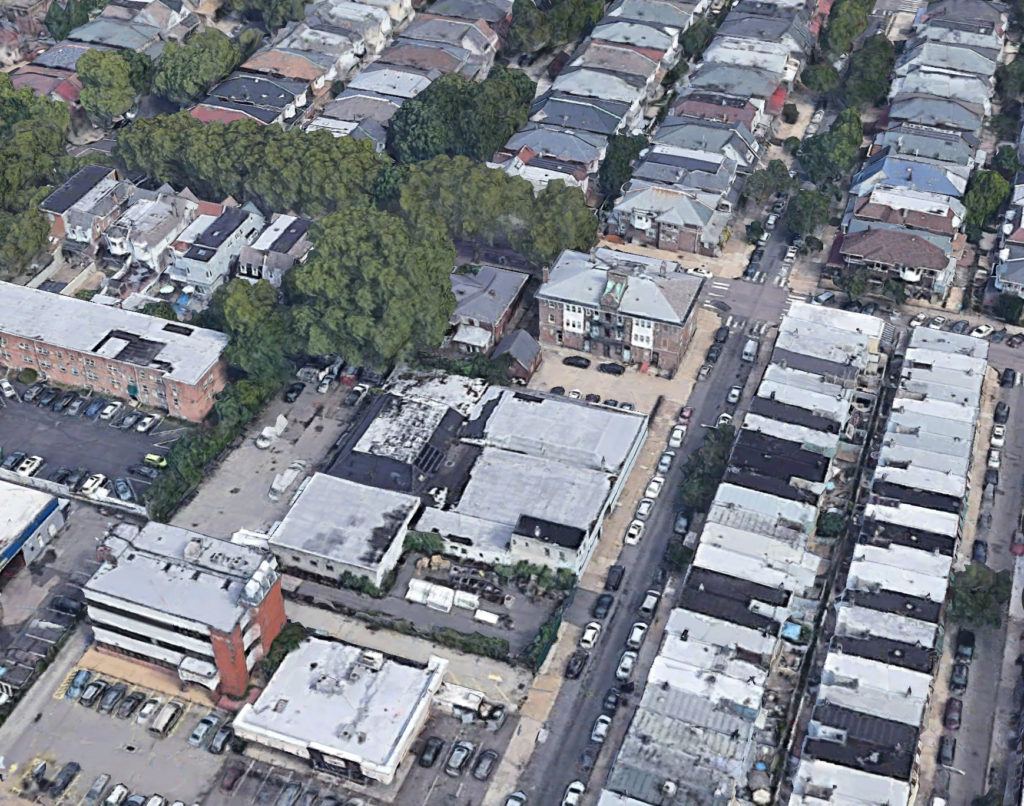 Former conditions on the site were much different than what is planned for the future. The property was once home to a low-slung, one-story structure which was a warehouse for a full-scale plumbing, heating and HVAC supply company. The structure’s bland stucco exterior did not really benefit the surrounding area, although it was somewhat unnoticed as it was tucked away on a quiet block. The building’s large footprint and land parcel made the site a prime candidate for development, and so it is relatively unsurprising to see a proposal moving forward here. 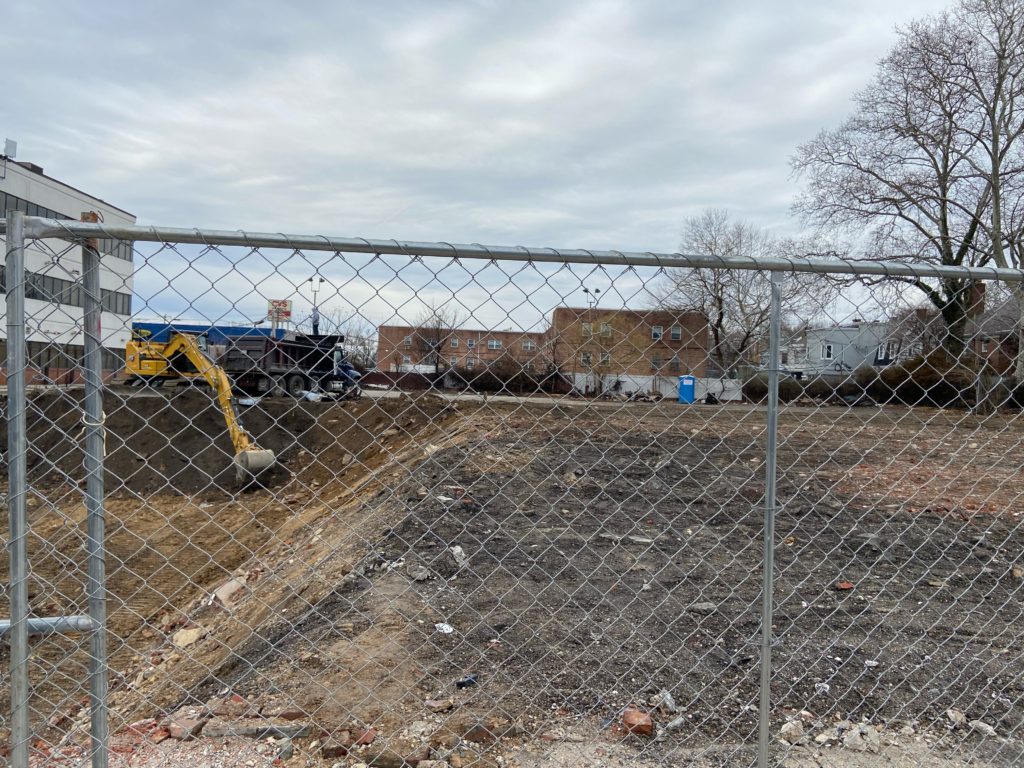 Presently, initial strides are being taken to get the development off the ground. The former establishment has been demolished, with a temporary chain-link now barricading the development area. 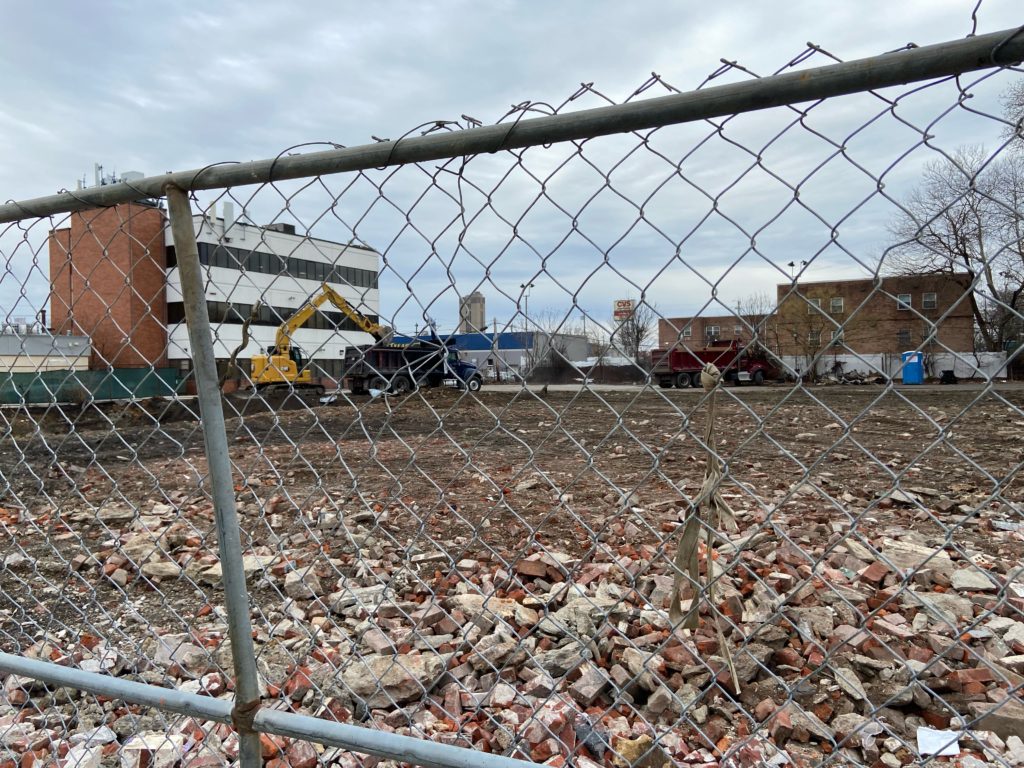 Furthermore, excavation work may now be moving forward as a digger is on site at the location of the southern row of homes and there is already a noticeable indentation on the ground. This is a great sign for the project moving forward, and with work already moving at this accelerated pace, framework could be observed on site by Summertime. 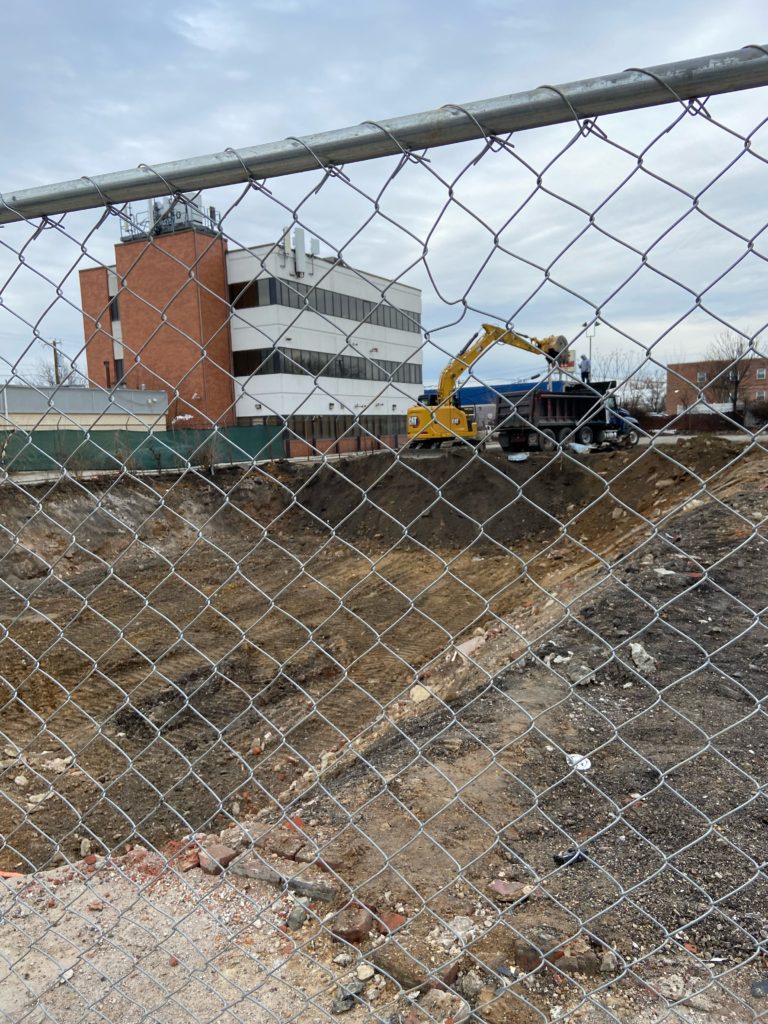 The new development will be a nice change of use for the land, swapping out a mildly blighted industrial structure for 22 new homes. Girard Estates typically does not see much development activity as the vast majority of developable parcels are already occupied, but it is a highly desirable area. This condition has probably impacted the affordability of the area as there are few available homes for potential buyers. These new homes will provide some relief to the sought-after housing supply. 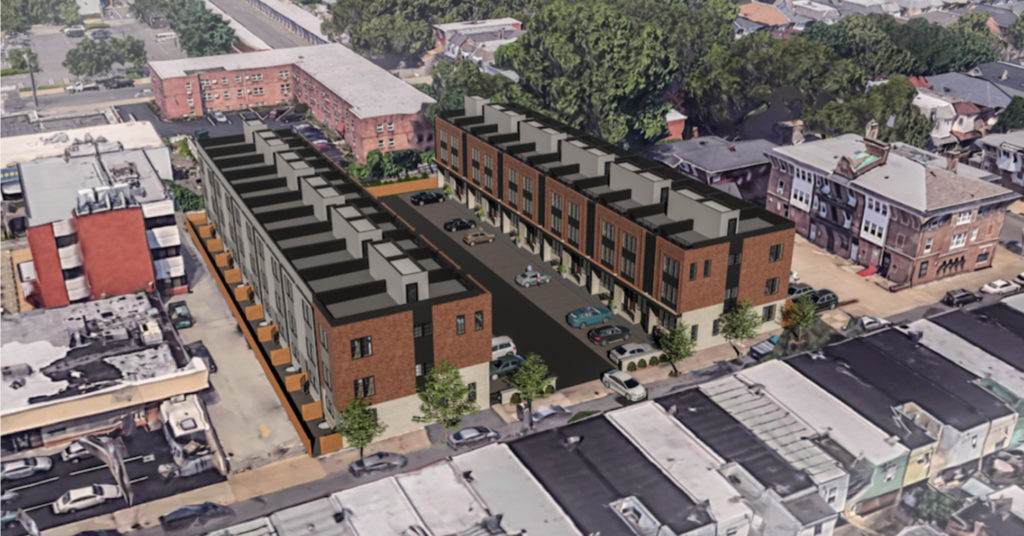 While something could certainly be said about the land use of the new project with its high parking space to unit ratio, the project resembles something that could potentially become more frequent in the neighborhood. Oregon Avenue, situated just to the south, sees a wide variety of poor land use. Given its proximity to the Broad Street Line to the east, the opportunity is ripe for new mixed-use development to sprout along the corridor.

No official completion date is known for the project at this time.

Be the first to comment on "Site Cleared At 2616 South 18th Street In Girard Estates, South Philadelphia"