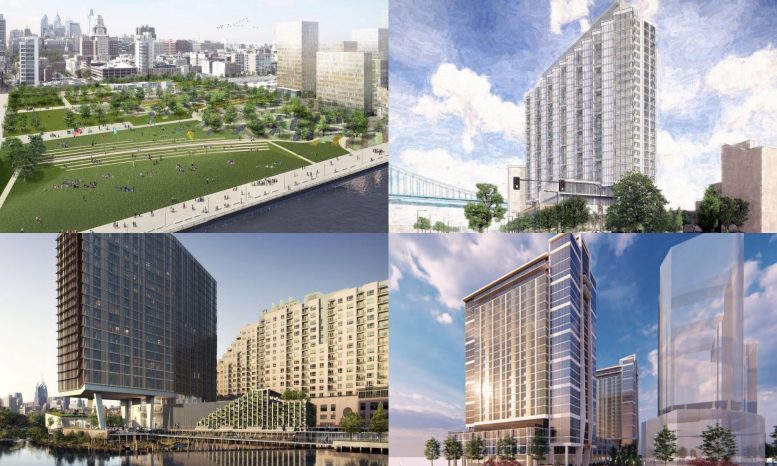 Development at Delawware Avenue. Credits listed in the article

Delaware Avenue is a major thoroughfare running along the eponymous Delaware River (though certain sections feature different names). Large stretches of the street are either industrial, either presently or formerly, or largely suburban, with massive shopping centers and parking lots, though the city has long planned to transform it into a dense urban corridor. Now, these dreams appear on the verge of becoming a reality, with a large number of proposals planned for the avenue. Some could be very far out, though others may see a shovel in the ground before the leaves turn. YIMBY takes you on a tour of all of the biggest proposed developments.

1402 South Columbus Boulevard will be a major development with a mid-rise apartment building and 92 townhomes. The proposal will replace a swath of grassy vacant land. The design features a façade with alternating gray and white coloring. Though no official number of units has been confirmed, the 586 proposed parking spaces suggests that the number will be in the hundreds. 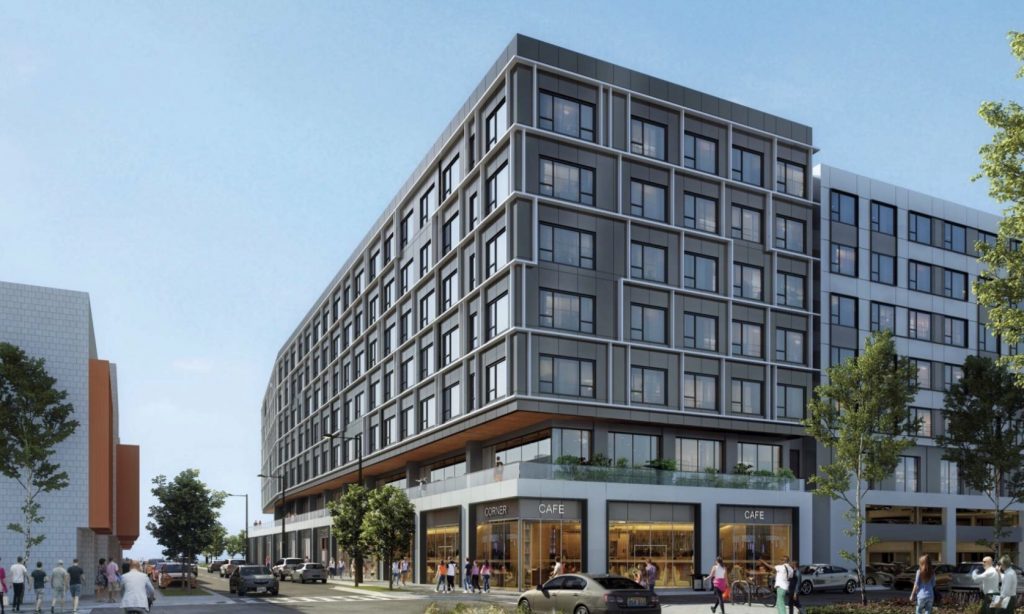 Just north of that site, plans have been made for Liberty On The River, a massive mixed-use development with six buildings and 2,002 residential units. A 283-room hotel is also in the works at the site, which is currently also a grassy lot with some trees. The project would also have 1,378 parking spaces for its residents. 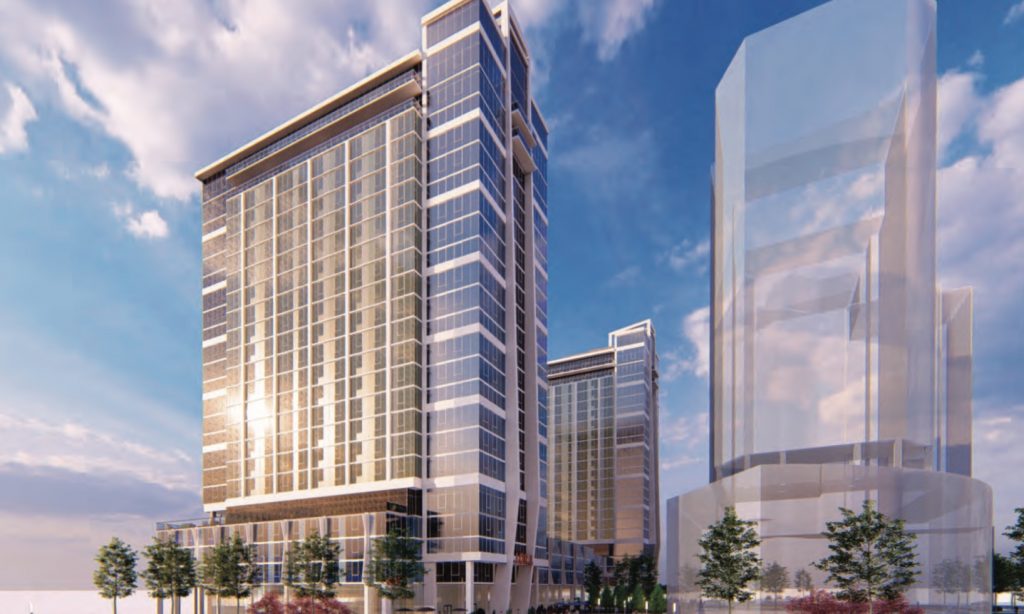 Liberty On The River Rendering. Rendering by Barton Partners

Just southwest of Liberty On The River, plans have been made for The Revelry, a renovation of the existing Riverview Plaza shopping center. The developer, Cedar Realty Trust, plans on adding 326 residential units to the property. The development would consist of two new mixed-use buildings with retail space on the ground floor. A new pedestrian promenade is included in the plans that will certainly help make the neighborhood more walkable. 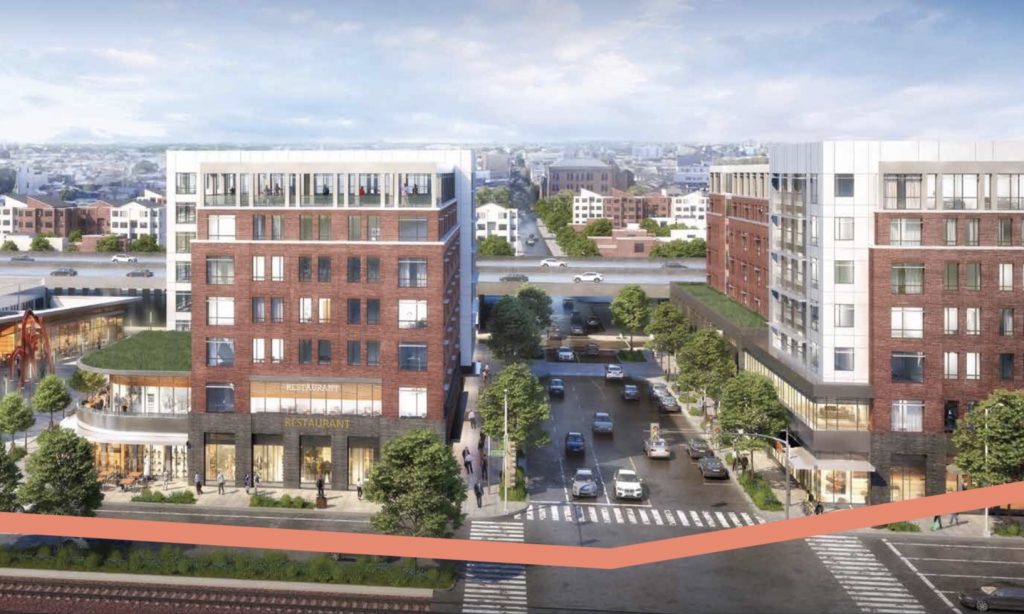 Rendering of the Revelry courtesy of Cedar Realty Trust.

Further north, plans are on the drawing board for 735 Columbus Boulevard, a 22-story tower with 308 apartments. The developer of the project is Ensemble Investments. The project will bring many new amenities to the neighborhood, including a new waterfront park, a market-restaurant, a beer garden, and a river deck. The project would completely renovate Pier 35 and give a considerable boost to the Penn’s Landing skyline. 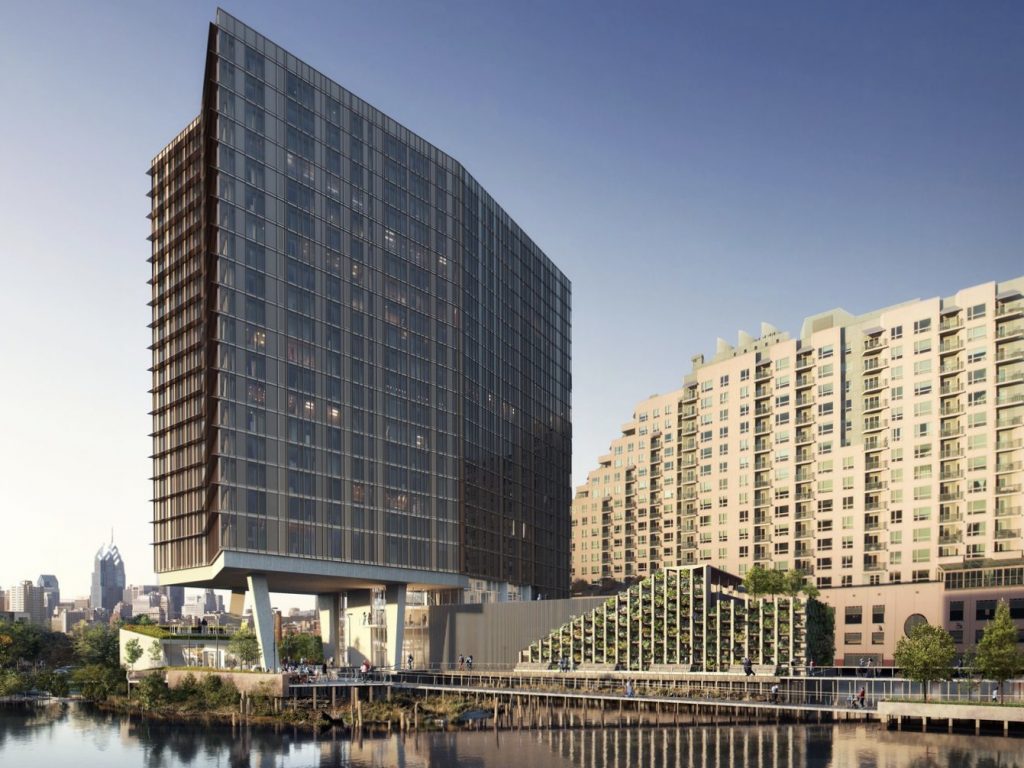 Rendering of the new tower designed by Digsau.

Further north is perhaps the most ambitious project proposed on the Delaware Avenue corridor. A $225 million Penn’s Landing renovation will bring 11 acres of green space and will cap I-95 from Chestnut Street to Walnut Street. It will also add 1,500 residential units and 500 hotel rooms. The project will add 100,000 square feet of retail, restaurants, and entertainment space. Construction is slated to start in 2021 with an expected delivery date of 2024. The plans could change in the near future, though, as four separate developers are competing for the rights to build the project, each with a separate design. Among those developers attempting this are the 76ers NBA franchise looking to build a new arena, Hoffman and Associates of DC, as well as Durst from New York. 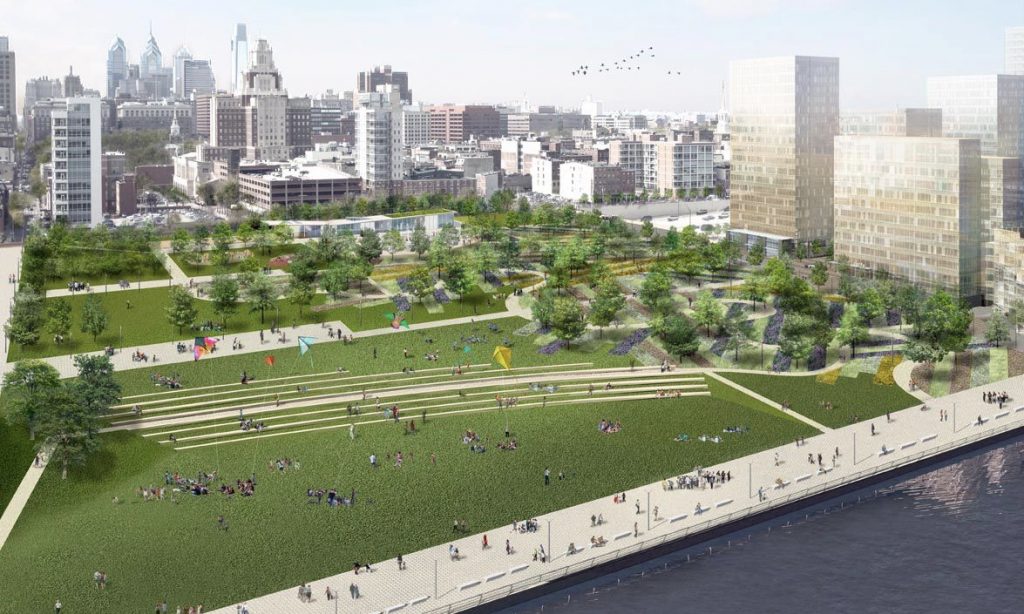 Rendering of the future of Penn’s Landing. Rendering by Hargreaves Associates.

Above the Benjamin Franklin Bridge, a 24-floor, 290-foot-tall residential tower is proposed at 300 North Christopher Columbus Boulevard. The project will feature 10,000 square feet of retail space on the ground floor. The developer, The Durst Organization, plans on breaking ground in the first three months of 2021. 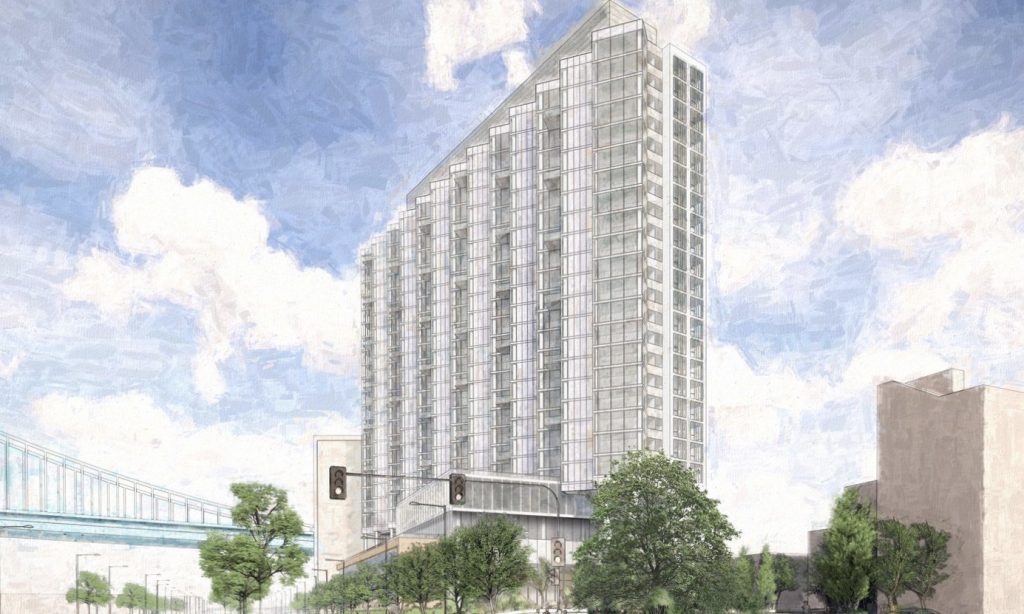 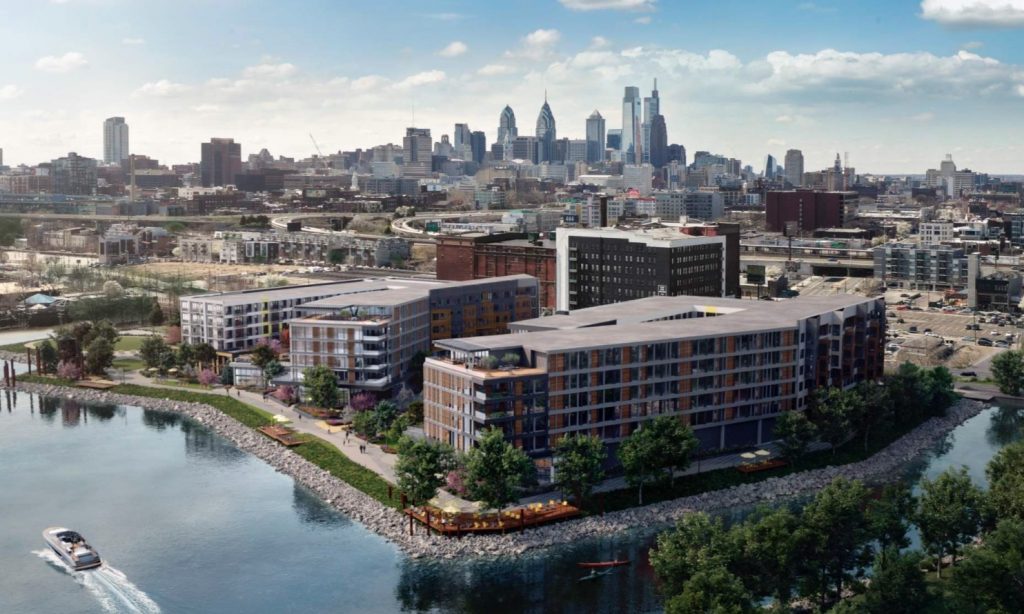 Rendering of the Festival Pier project. Rendering by Bernardon.

At 626 North Delaware Avenue, plans have been made for the construction of a 16-story, 198-foot-tall tower. The project, designed by Coscia Moos Architects, features a sleek and modern gray façade. The tower would replace a current vacant lot on a block where the only other building is a gas station. 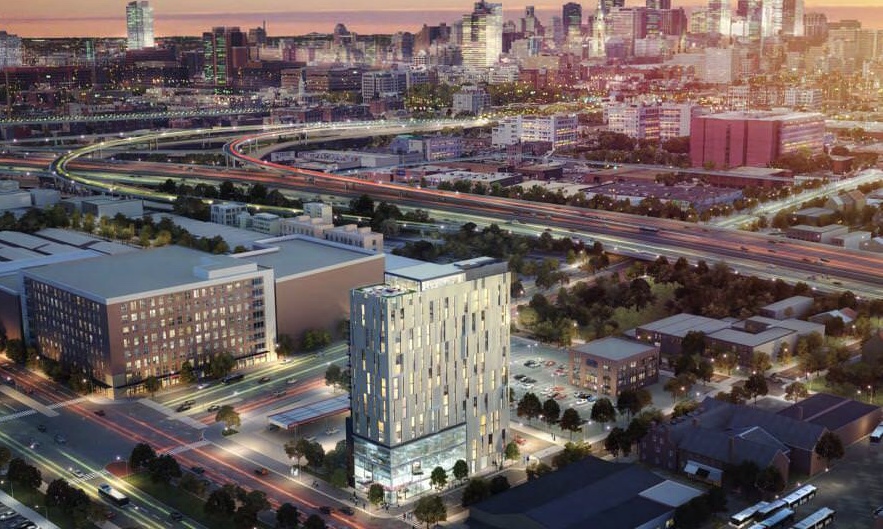 Just across Fairmount Avenue, at 700 North Delaware Avenue, two seven-story mixed-use structures are currently in planning. A total of 488 residential units are slated to rise in the two buildings, with 192 units planned for the east building and 296 units planned in the west building. The eastern building will also have 54 parking spaces and 95 bicycle spaces, while the western building will have 89 parking spaces and 95 bicycle spaces, for a grand total of 143 parking spots and 190 bike slots. The development would replace a bus parking lot. A row of historic townhomes on the block will be preserved. 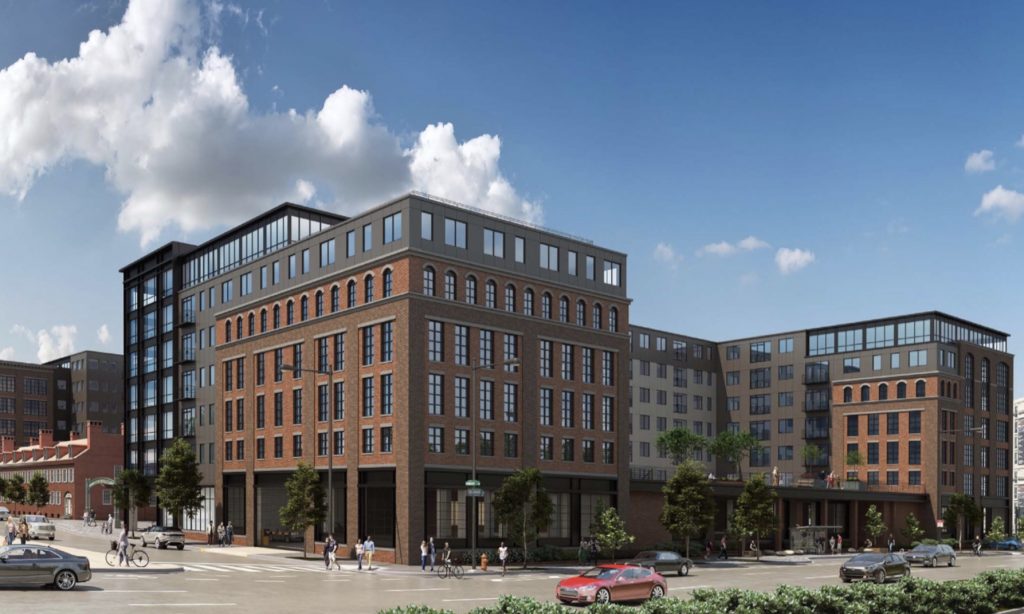 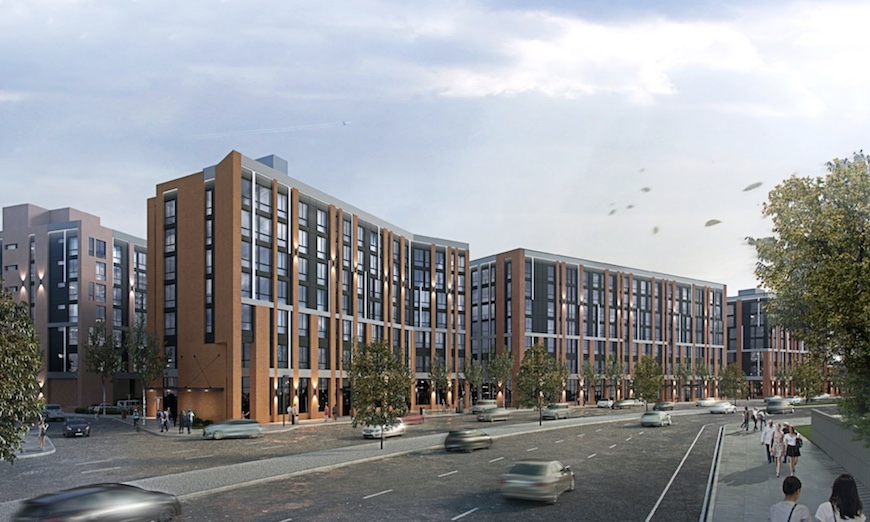 At 1130 North Delaware Avenue, plans have been made for a ten-story structure with 244 residential units. The building will also include 50 parking spaces. The modular construction project will contain 405 modules. The $55 million project will also include a roof deck with sweeping views of the Delaware River and Philadelphia skyline as well as a landscaped public open space. Every unit will have 9-foot-tall floor-to-ceiling windows. Streamline is the developer. In August, the lot received a zoning permit, so it is possible that the project could move forward soon. 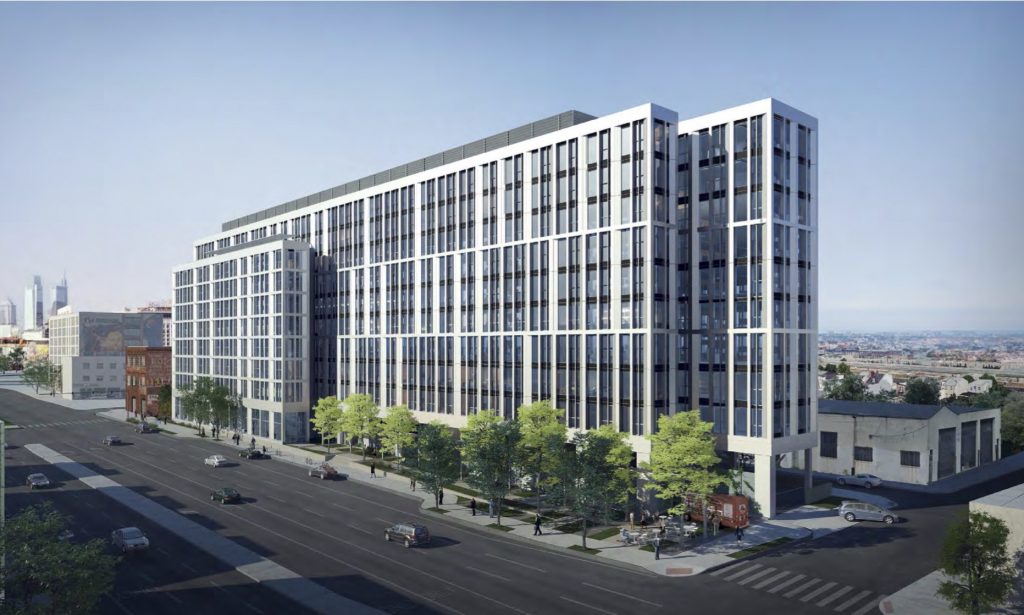 At 1121 North Delaware Avenue, 116 units are set to rise on the lot that is currently home to a single-story warehouse. The project, named Pier Village, will feature 116 units. There will 28 townhomes, each four stories tall, as well as one mixed-use building with 35 units and another with 53 units. The project will include ground-floor commercial space and a pedestrian pathway directly to the river. 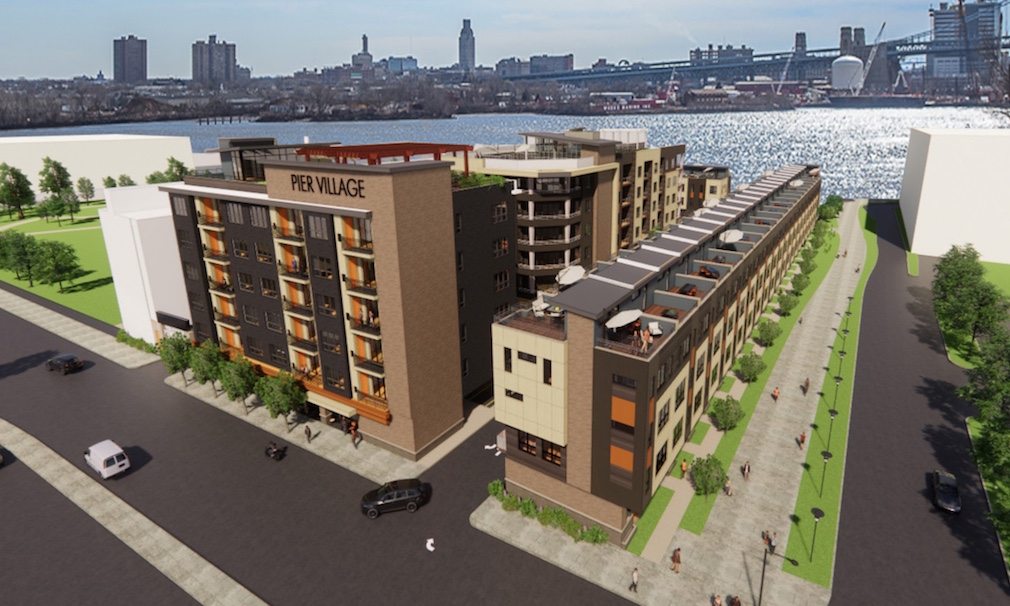 Over 5,500 units are planned for construction on Delaware Avenue, and that number does not include the projects with an uncomfirmed number of residential units. There are also 783 hotel rooms proposed along the corridor. The staggering amount of proposed developments represents decades-long neglect in the corridor, so it is positive to see proposals finally filing in. With the addition of a large amount of ground-floor commercial space and many pedestrian concourses, the Delaware Avenue corridor is on its way to becoming a dense, walkable urban corridor.

1 Comment on "Looking at Planned Waterfront Development Along Delaware Avenue"