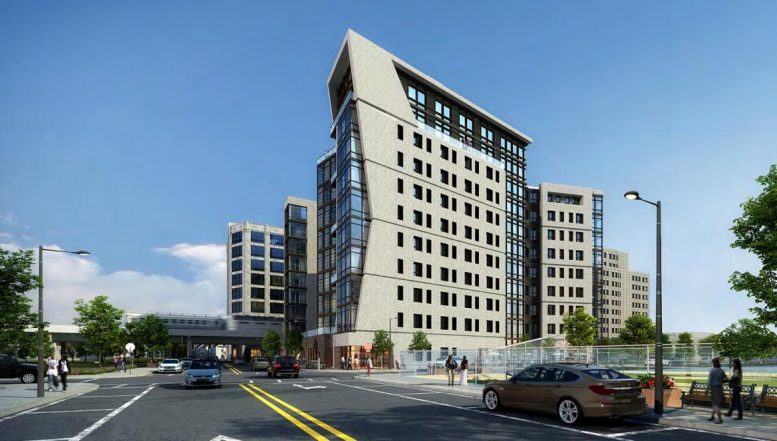 The Poplar neighborhood in North Philadelphia is not known for its skyline, yet two buildings proposed at 900 North 8th Street will elevate its profile. Designed by Coscia Moos Architecture and developed by APOM Holdings, the two-tower development will rise at the corner of North 8th Street and Poplar Street and yield a total of 338 residential units. The east building will stand 154 feet and 12 stories tall wile the west tower will rise 134 feet and 11 floors.

The buildings will stand out thanks to their prominence over the low-rise neighborhood and with their striking design. The structure at the street corner is composed as a glass curtain wall with dark mullions, wrapped in a solid beige exterior with dramatic angled cuts and punched windows. A triangular cut faces Poplar Street, with a symmetrical cut on the opposite side.

The second structure is fashioned as two separate structures connected by a series of sky bridges. The structure’s façade features a combination of glass and solid surfaces similar to its counterpart at the corner.

The development will add density and pedestrian activity to a part of the city that still featues many vacant lots. The property sits within the general area of Temple University and the eponymous SEPTA rail station at the Fox Chase Rail Line.

The proposal was revealed over a year ago, though there have been no signs of construction so far. No anticipated completion date has yet been announced.

Be the first to comment on "Two High-Rise Residential Buildings Proposed for 900 North 8th Street in Poplar, North Philadelphia"