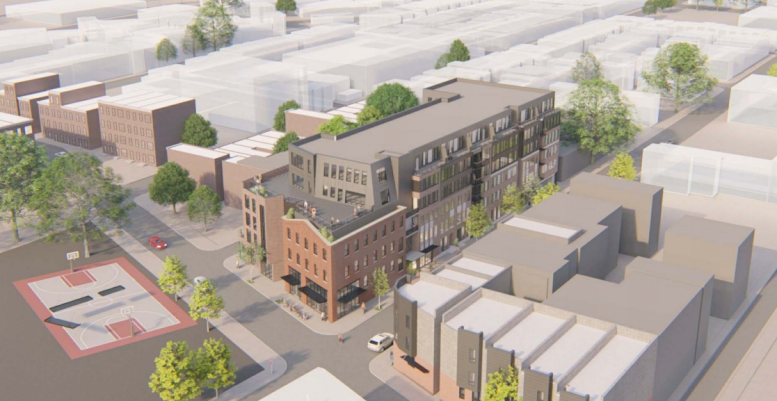 The neighborhood of Norris Square in North Philadelphia is seeing a rise in proposed development of late, including at 1700-30 North Howard Street, where a 91,230-square-foot structure is planned. Located at the corner of Cecil B. Moore Avenue and North Howard Street near Fishtown, the building will incorporate an industrial prewar façade and a new six-story addition, with a total of 3,850 square feet of commercial space and 87,650 square feet of residential space including amenities. The property will include 110 residential units and 35 parking spaces. The development will be a substantial addition to the generally low- and mid-rise neighborhood.

The new addition will replace several industrial structures, though none as distinguished as the portion that will be preserved. The new structure’s exterior will sport modular bricks with corrugated zinc and aluminum cladding. The new addition will rise behind the preserved portion at the corner Cecil B. Moore Avenue and North Howard Street. The Waterloo Street elevation will feature outdoor parking.

Directly across the street from the property is the Moffet School located at 127 West Oxford Street with a a big lot that includes a playground. Two blocks to the east is the Palmer Doggie Depot, a dog park that is also connected to the Fishtown Athletic Center and the Shissler Recreation Center, which includes a baseball field that incorporates a soccer field.

Be the first to comment on "Residential Building Planned for 1700-30 North Howard Street in Norris Square, North Philadelphia"