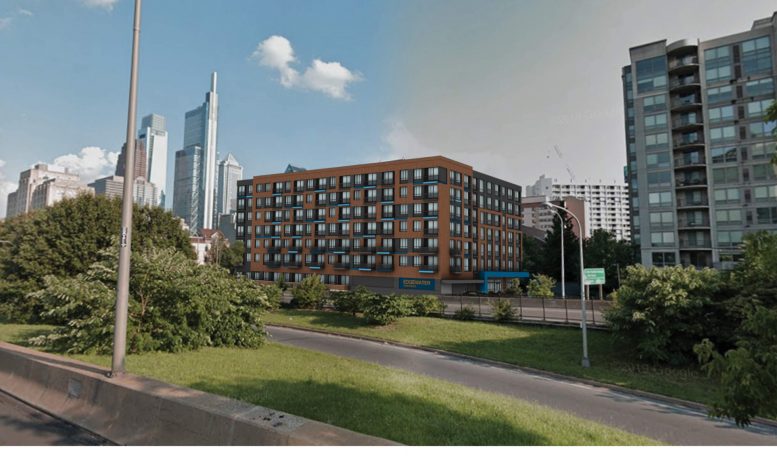 Rendering of The Edgewater. Rendering created by JKRP Architects.

Center City West and western Logan Square have seen a flurry of recent development, transforming the area into a bustling, dense neighborhood. Another forthcoming addition is the Edgewater Apartments at 230 North 23rd Street, a 180-unit project located a block away from the Schuylkill River. Designed by JKRP Architects, the 145,473-square-foot complex will rise 83 feet and seven stories with homes ranging from studios to two bedrooms.

Edgewater Apartments is the second phase of the Edgewater complex, located across North Bonsall Street at 2323 Race Street in the extreme northwest corner of Center City. The original structure rises 12 stories and was built in 2006. The planned encore will sit at the northern end of a block bound by North 23rd, Race and North Bonsall Streets, and the off-ramps of the I-676 Vine Street Expressway to the north. The new building will sit north of the Edgewater Garage, a multi-story parking structure discreetly concealed behind traditionally-styled townhouses on North 23rd and North Bonsall streets. 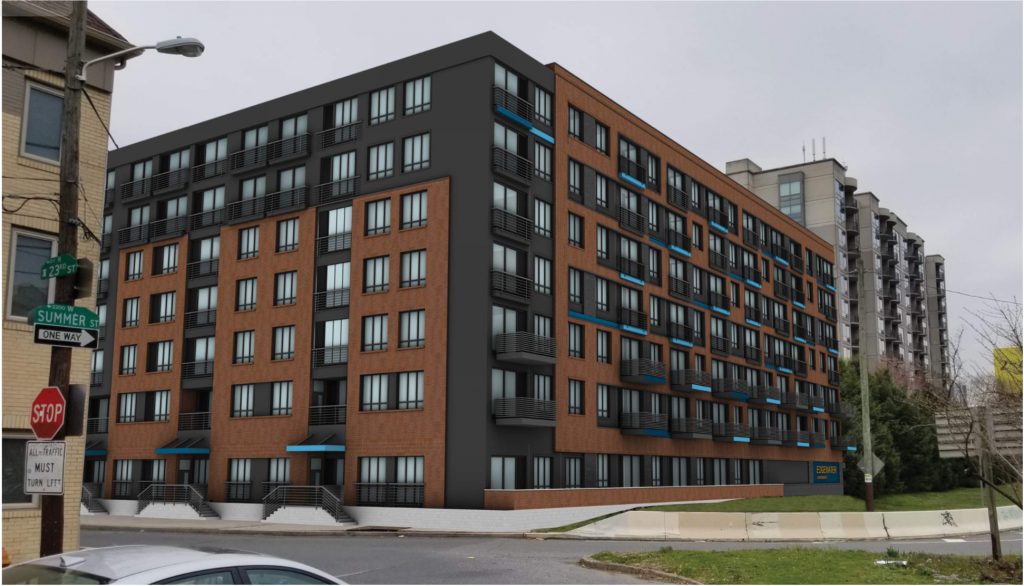 Rendering of The Edgewater, created by JKRP Architects.

The new building’s exterior will harmonize with the townhouses, which emulate the city’s historic architecture. The street-facing façade will mix red and black brick, with cast stone at the base and composite metal panels at the top. Blue metal panels will accent the entrance canopy and balconies. The courtyard-facing exterior will consist of dark red and light gray corrugated metal panels, matching the overall palette. 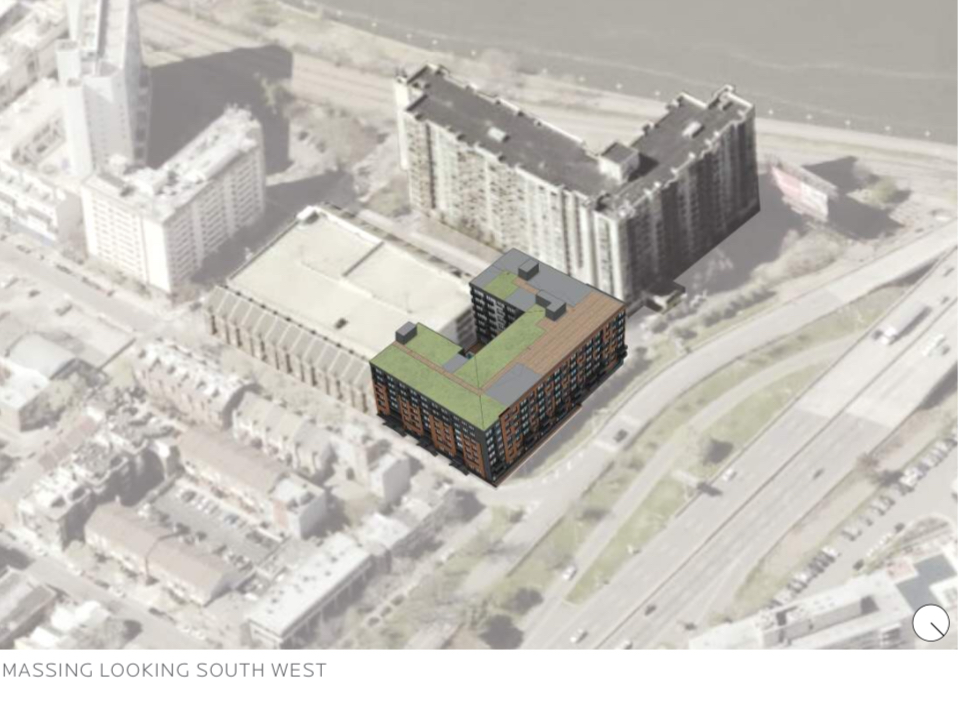 Aerial rendering of The Edgewater, created by JKRP Architects. 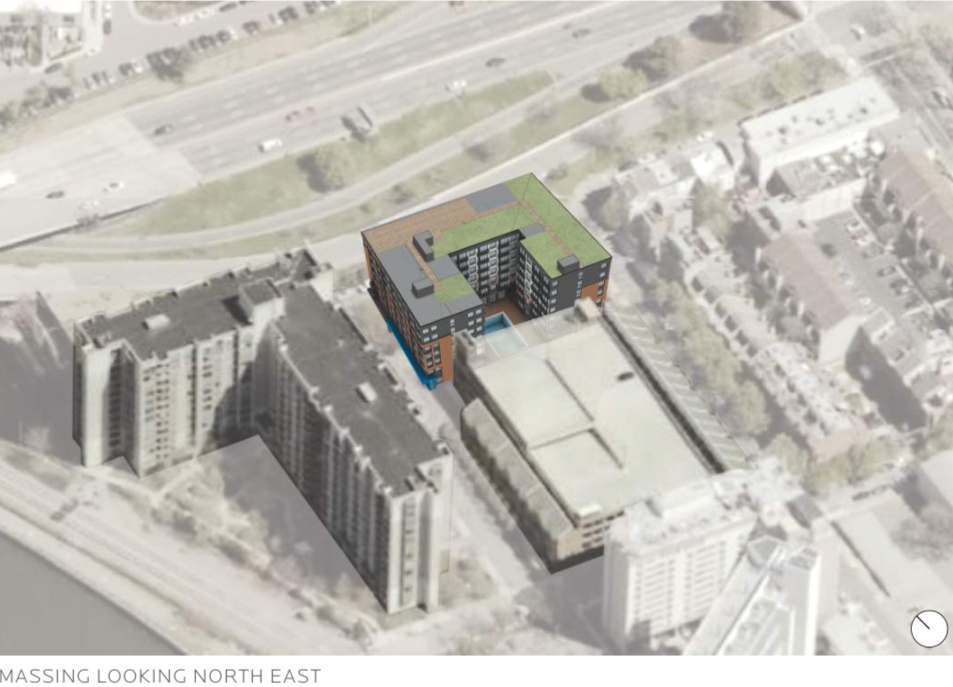 Aerial Rendering of The Edgewater, created by JKRP Architects.

The courtyard wraps around an outdoor pool that sits at the ground level. Other ground-level amenities include a lobby that opens onto North Bonsall Street, a co-working office, a fitness center, and a bike storage room. The ground floor will also include 12 residences, six of which will be maisonette apartments with private entrances from North 23rd Street and five will feature terraces opening onto a planted berm by the off-ramp.

The upper floors will feature generally standard layouts, with two two-bedroom units at the corners and one facing the rear yard, and studios and one-bedroom apartments spanning the space between. Three elevators will service the structure. Roughly three-quarters of the roof will be accessible, with a roof deck, green roof, and a dog park. 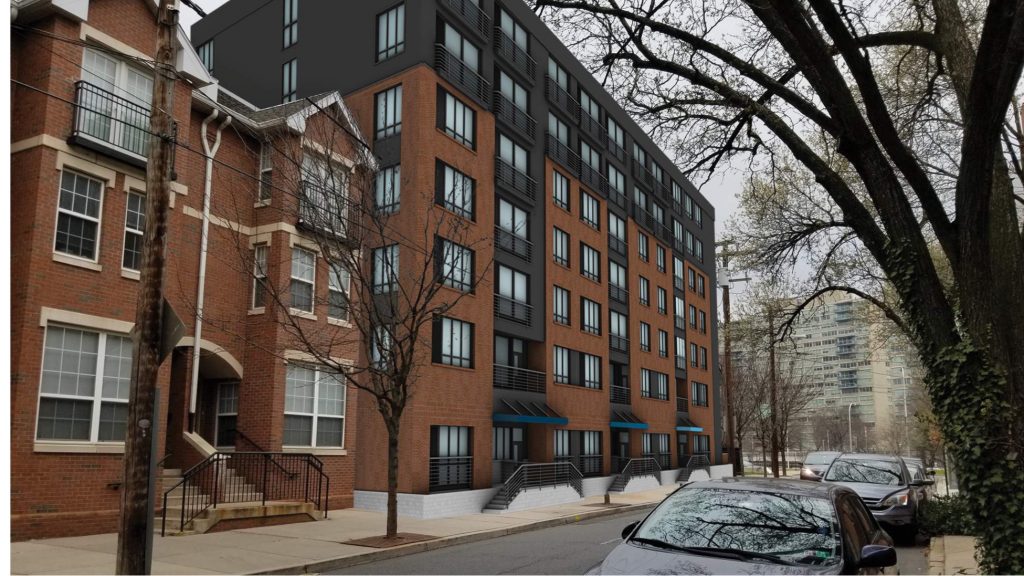 From an urban planning perspective, Edgewater Apartments will act as a transitional element between the predominantly low-rise blocks to the east and the taller buildings to the west and north. The project will add density to a remote corner of Center City by replacing a sizeable parking lot, an amenity that makes for poor use of land in the central part of one of the largest cities in the nation. 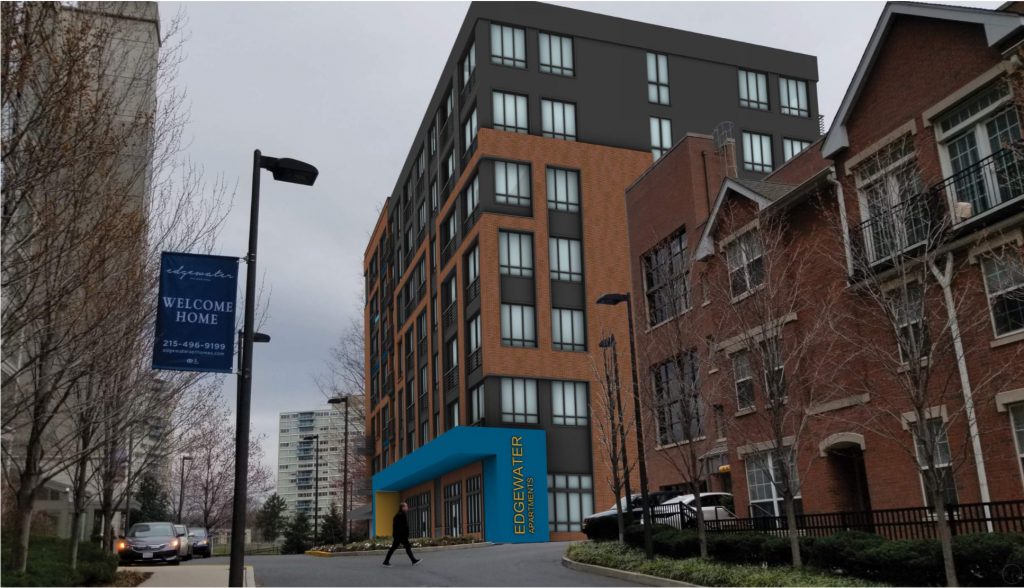 Rendering of The Edgewater, created by JKRP Architects.

Be the first to comment on "180-Unit Edgewater Apartments Proposed for 230 North 23rd Street in Logan Square, Center City"