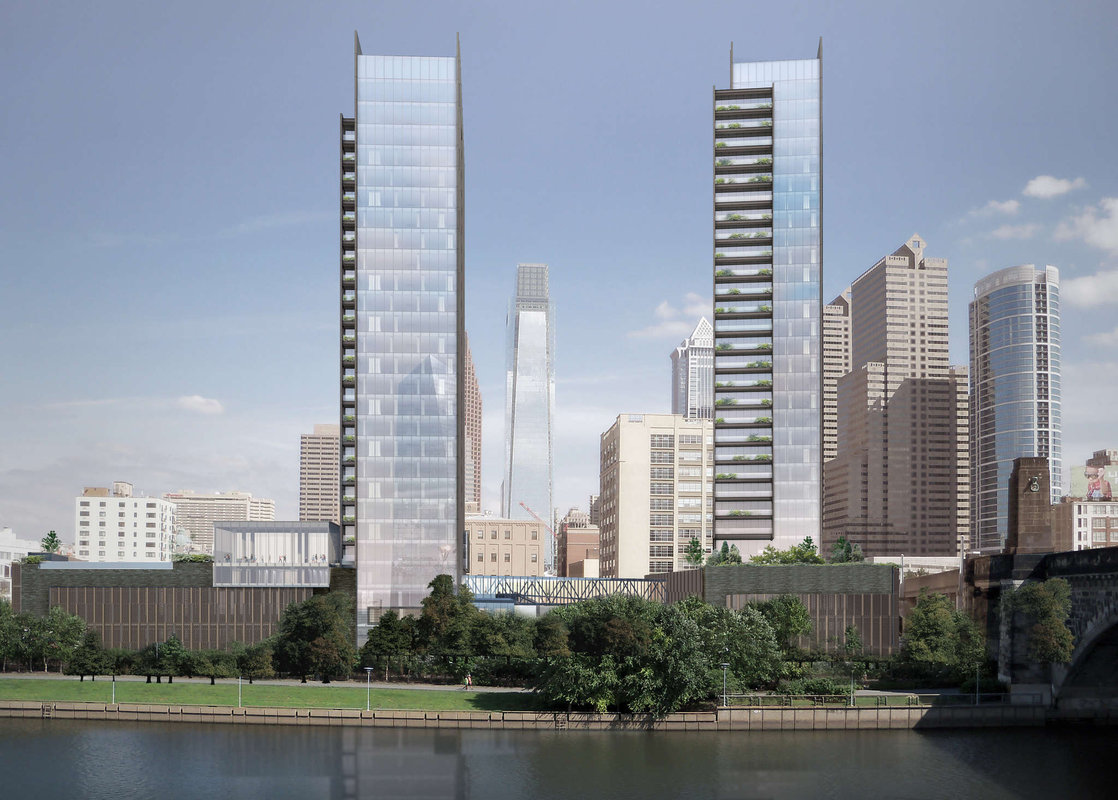 The Center City West neighborhood has taken on a new look over the past few years, as the first of the newest crop of developments are in the final stages of construction. A pair of towers dubbed Riverwalk stands at 60 North 23rd Street, near the Schuylkill River. Designed by Gensler and developed by PMC Property Group, the angled south tower rises 363 feet and 32 stories, and the north tower rises 315 feet and 28 stories. In total, the slab-like towers will soon boast 711 total units. 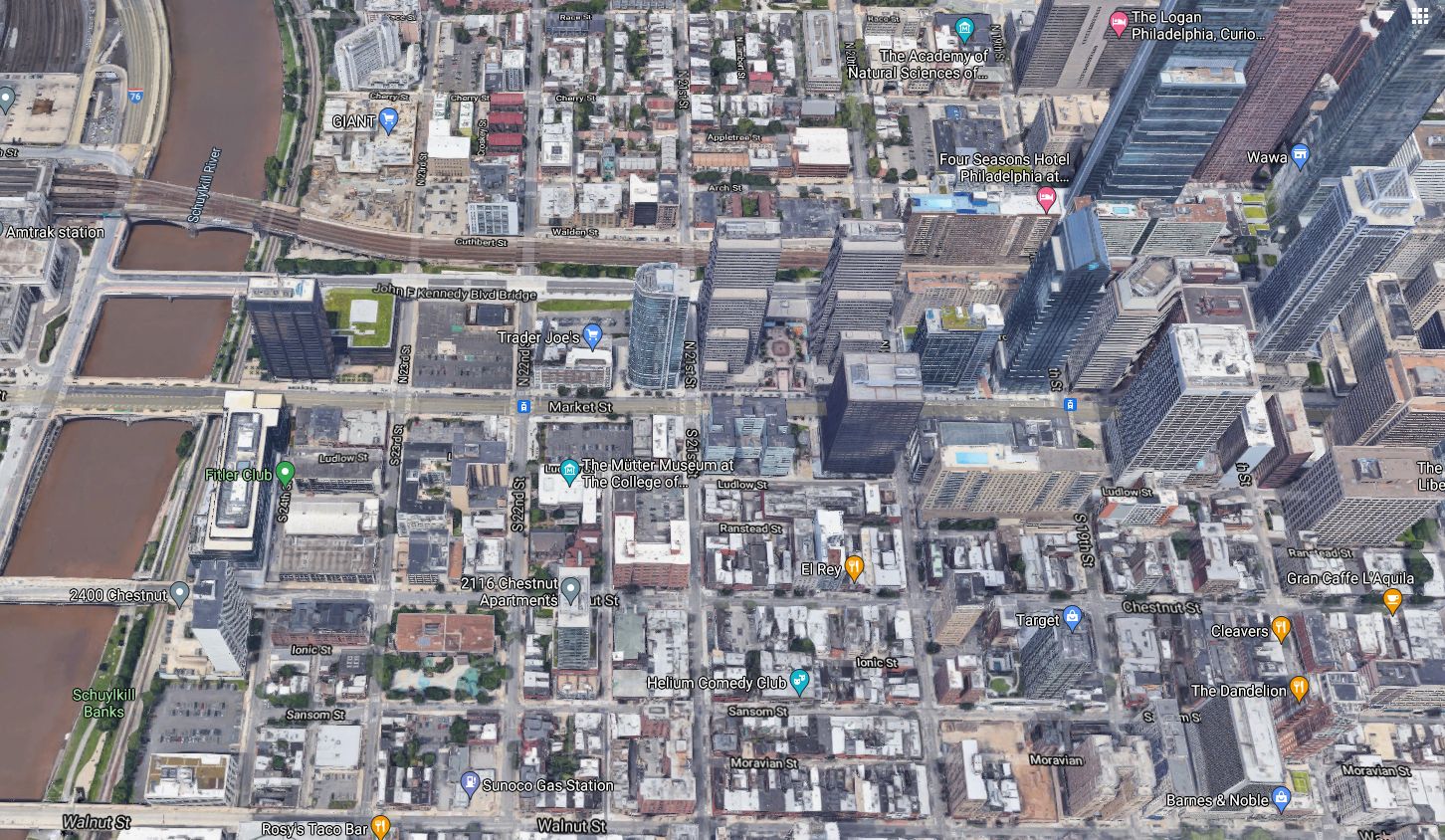 Center City West is a section of Center City located roughly between 21st, Chestnut, and Arch streets and the Schuylkill River. For decades, the neighborhood was comprised primarily of parking lots, yet in recent years the area has been on the rise with a large number of projects that have recently been completed, underway, and proposed. The largest developments that have originally been completed in the neighborhood are the PECO Building, completed in 1970, and the Aramark Headquarters which renovated the structure of an existing building at 2400 Market Street in 2019. With Aramark relocating its headquarters to the neighborhood, the company saw the potential of the area’s growth. 2222 Market Street, the first development of the new construction wave was revealed in 2019, and is currently underway. 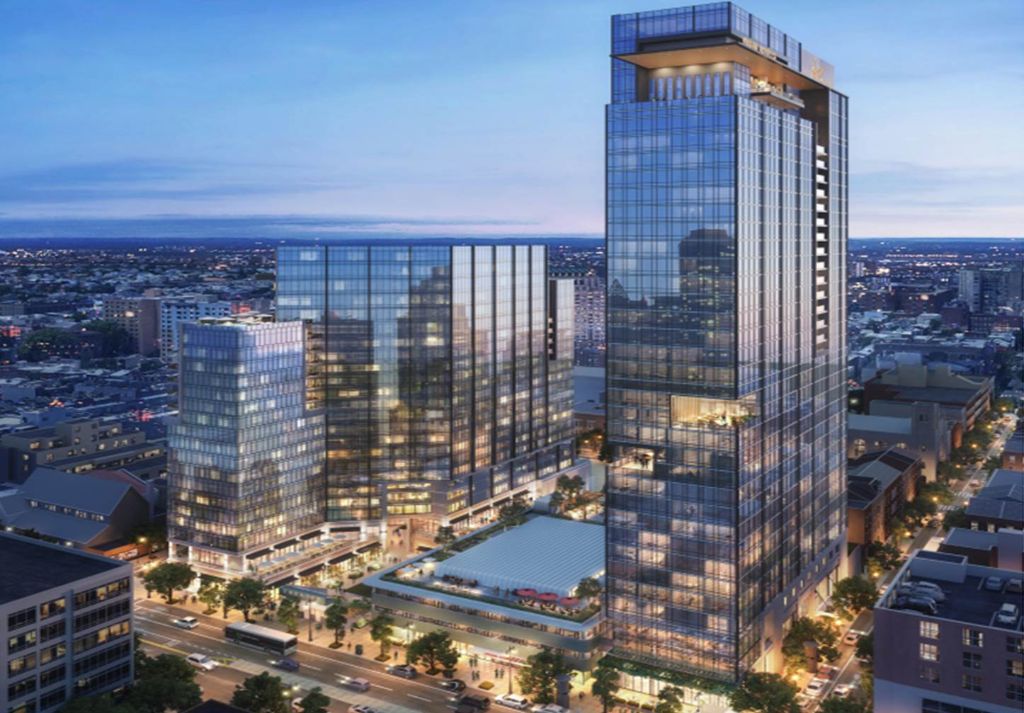 For years, Philadelphia YIMBY has published in-house-made skyline massings, of old developments and new proposals alike, and today we bring another project to our readers. Recently, images of a new Virgin Hotels development proposal have surfaced, showing two new buildings at 500 South Broad Street in Rittenhouse SquareCenter City. Shown in renderings are a taller tower standing 36 floors and a shorter tower rising 23 stories. The project is being designed by Skidmore Owings and Merrill and developed by The Badger Group, Dranoff Properties, The Goldenberg Group LLC, and Virgin Hotels, which will have their logo displayed on the north tower. In this feature, Philadelphia YIMBY presents our skyline massings of the Virgin Hotel towers.

A surge of development in Center City West is poised to change the neighborhood in the near future. One of these additions is the recently redesigned proposal at 2300-24 Market Street. The original plan was more massive and held residential space, and would have risen 202 feet and 14 stories high. The original iteration was designed by Tantillo Architecture and developed by Lubert-Alder, but now KieranTimberlake and Breakthrough Properties have collaborated to bring the new iteration. The building will now stand at a noticeably shorter height, with a confirmed floor count of nine floors, along with the buildings purpose shifting to office and lab space. Today we share YIMBY’s own skyline massings of the development.

Center City West is seeing a surge in construction, where one of the more notable developments is an overbuild proposed at 2300-24 Market Street. The original iteration was designed by Tantillo Architecture, with Lubert-Adler as the developer. The architect behind the latest design is KieranTimberlake, and Breakthrough Properties is the developer. The building was originally planned at 202 feet and 14 stories tall, but now the plans show a slightly shorter, nine-story structure. In a city meeting, four slides were presented showcasing diagrams and three new renderings of the new, distinctive design.