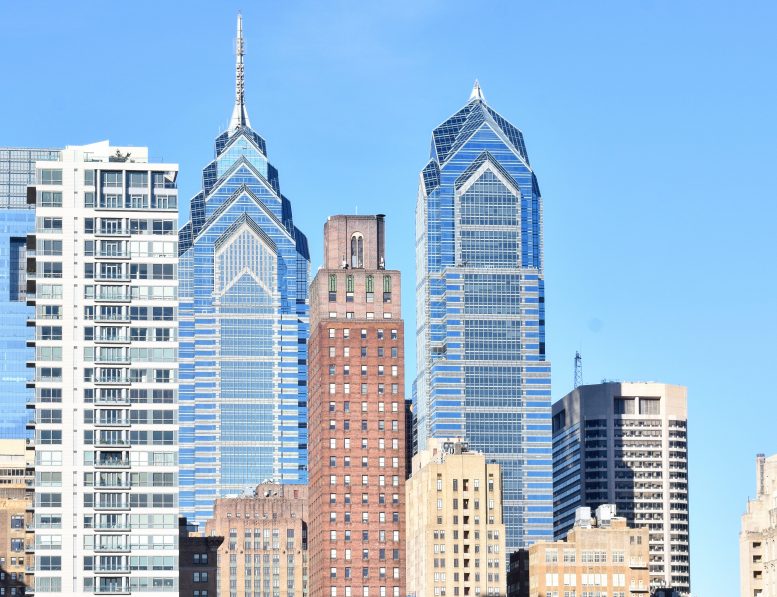 One and Two Liberty Place. Photo By Thomas Koloski

Two Liberty Place at 50 South 16th Street in Center City is a 848-foot-tall skyscraper similar in style to the complex’s anchor tower One Liberty Place at 1650 Market Street, with its floor boosted by an extension on the north side of the structure.  Designed by Murphy/Jahn and developed by Willard G. Rouse III of Rouse and Associates, the tower started its erection in 1988 and stands 58 stories tall. Philly YIMBY looks at the design process through drawings by Helmut Jahn that date to 1986. 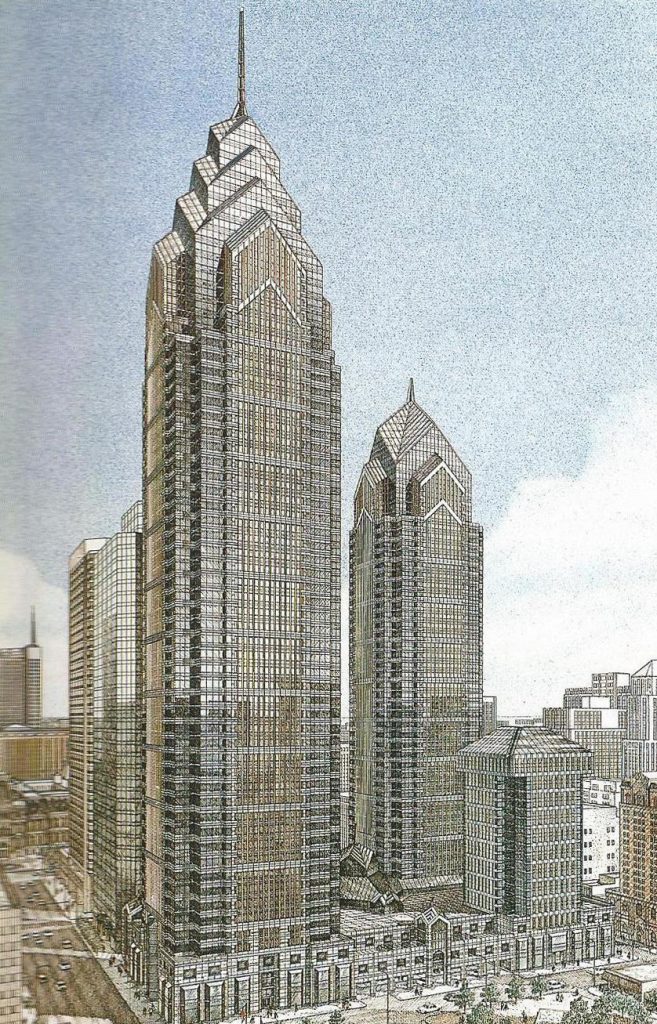 The original design for Liberty Place showed two symmetrical towers placed diagonally from each other, with a 60-story tower to the northwest and a 50-story one to the southeast. Two Liberty Place originally had floor plates that were very similar to those of One Liberty Place, along with a square core. The original roof height of the tower rose 675 feet high, with a squat spire bringing the structure to 708 feet. 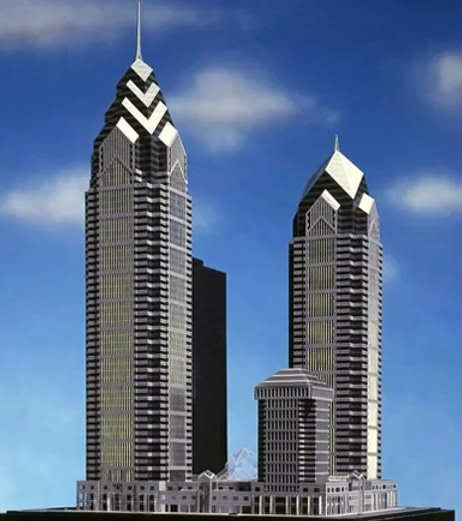 While One Liberty Place was under construction, developers rushed to find an anchor tenant for Two Liberty Place, which was part of the second phase that also included the Shops at Liberty Place and the hotel. After a long search, Cigna appeared interested in acting as the anchor tenant, but they were displeased with the size of the floor plates and requested the architect to increase the amount of available floor space. 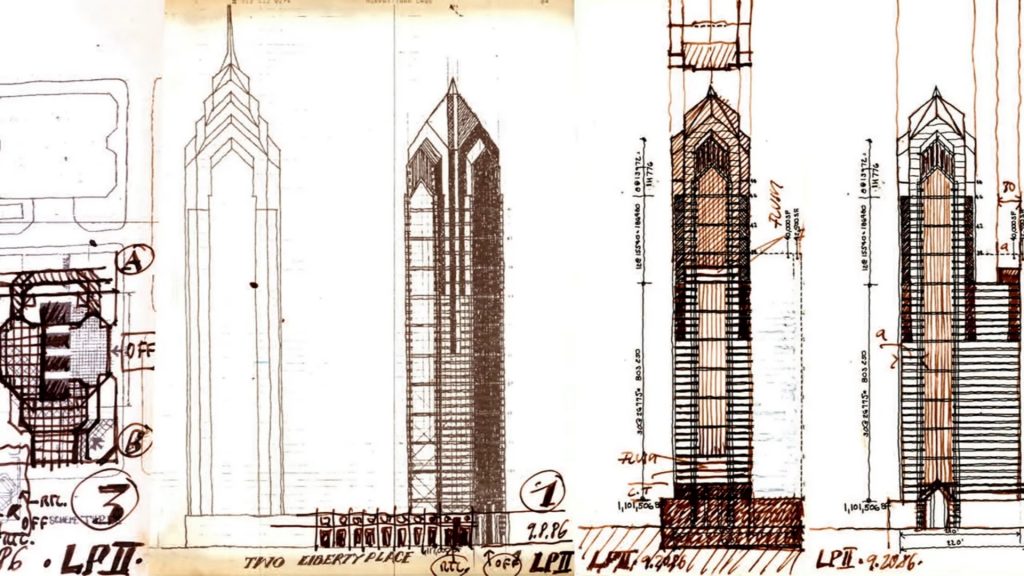 The redesign process appears to have lasted from September 1986 to August 1987, between the time when One Liberty Place passed the William Penn Statue to when its first tenants began moving in. The first drawing showed a symmetrical tower that was first shown, with extra space added to the corners via terraces and angled faces. The first September 20th drawings show early sketches of the north extension, illustrated from a somewhat confusing perspective. The drawing also shows that the tower’s height has been extended to 848 feet as we see it today, though there were still major differences in the design. 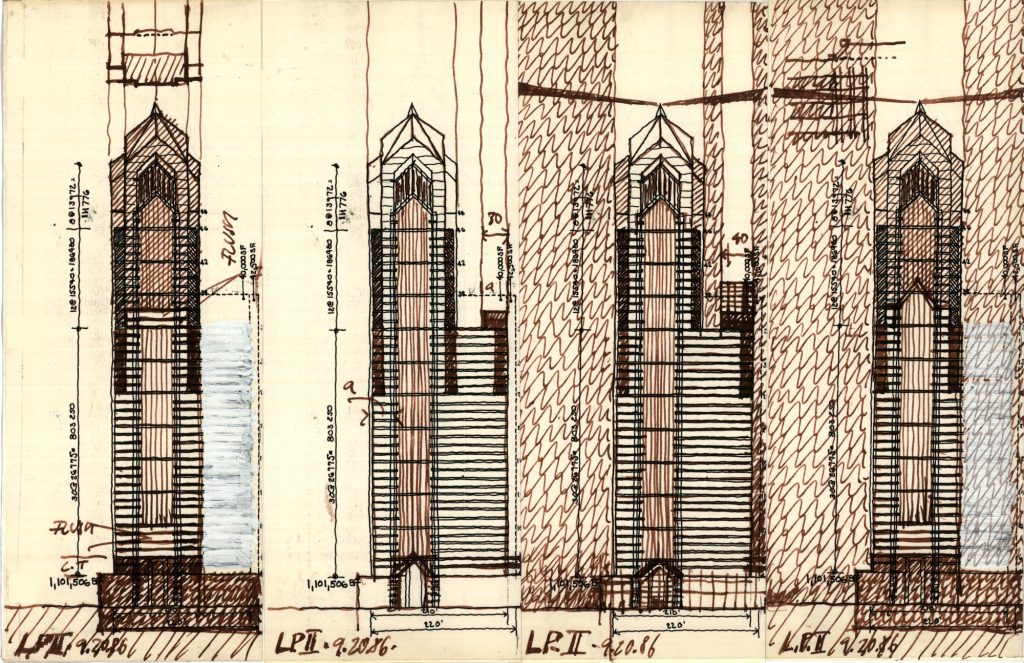 The next set of drawings both date to September 20, 1986. The two sketches on the right show extra floor space added to the building when compared to the previous drawings. The sketches show a structure that would rise above the flat roof of the extension, potentially having a triangular top similar to the four sides of the two skyscrapers. 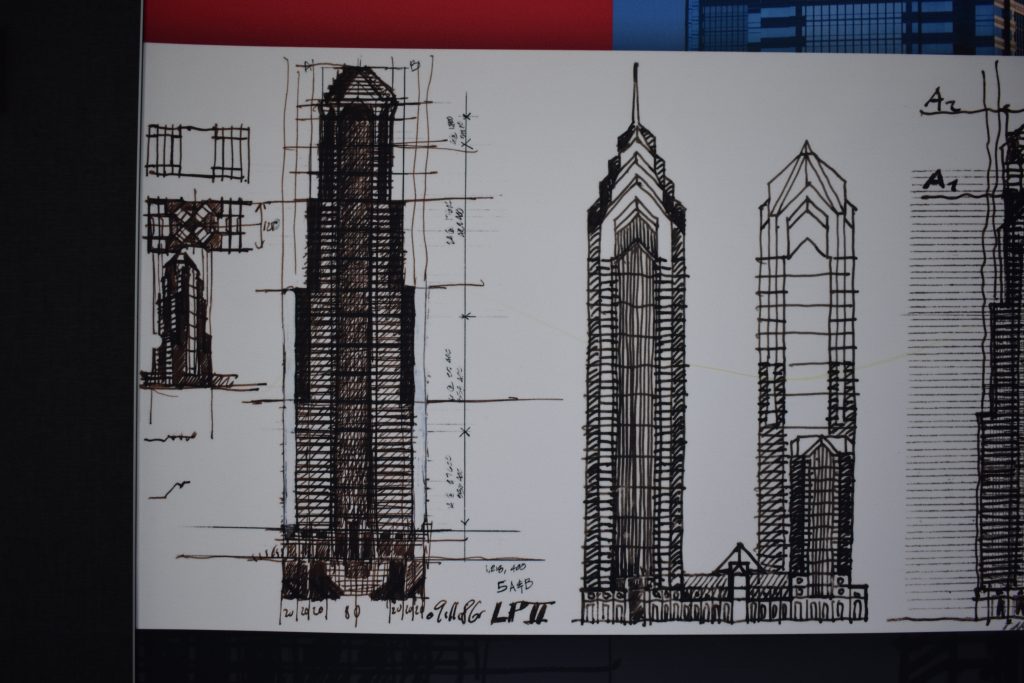 A set of drawings located at the One Liberty Observation Deck, with one dated on September 11, 1986, show a design where the north and south sides step up to the top of the crown, where the corners pop out to add floor space in the crown with a flat top. The drawing next to the first sketch is reminiscent to the first drawing with the added floor space on the corners, still standing 700 feet tall. The following drawing also shows the north and south face stepping up to the crown, which appears as it does today, though the tower’s façade appears mostly flat. 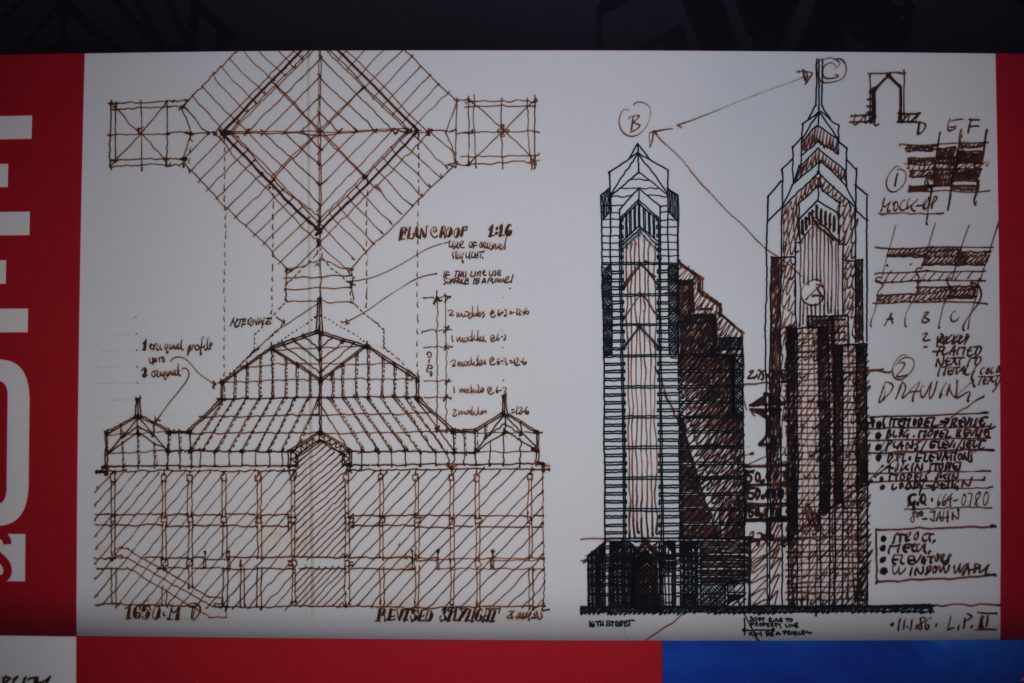 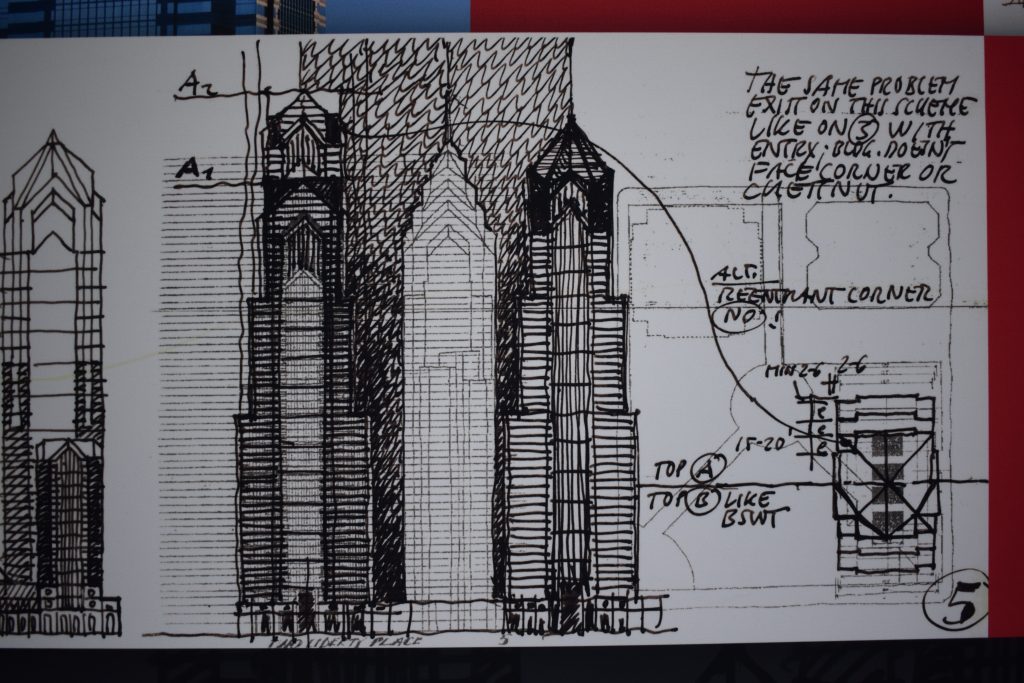 One of the last drawings at the observation deck also shows the same structure stepping up to the crown, but the angled edges are modified to give the tower its own unique look to the top. The very last drawing, dated November 1986, shows the tower with an oddly shaped northern extension, which steps up on three sections of the tower’s stone pattern as they are also topped with angled edges and faces. The very last sketch is from August 1987, showing the tower with the final form we see today, aside from the lower portion, which shows more floor space than exists today. 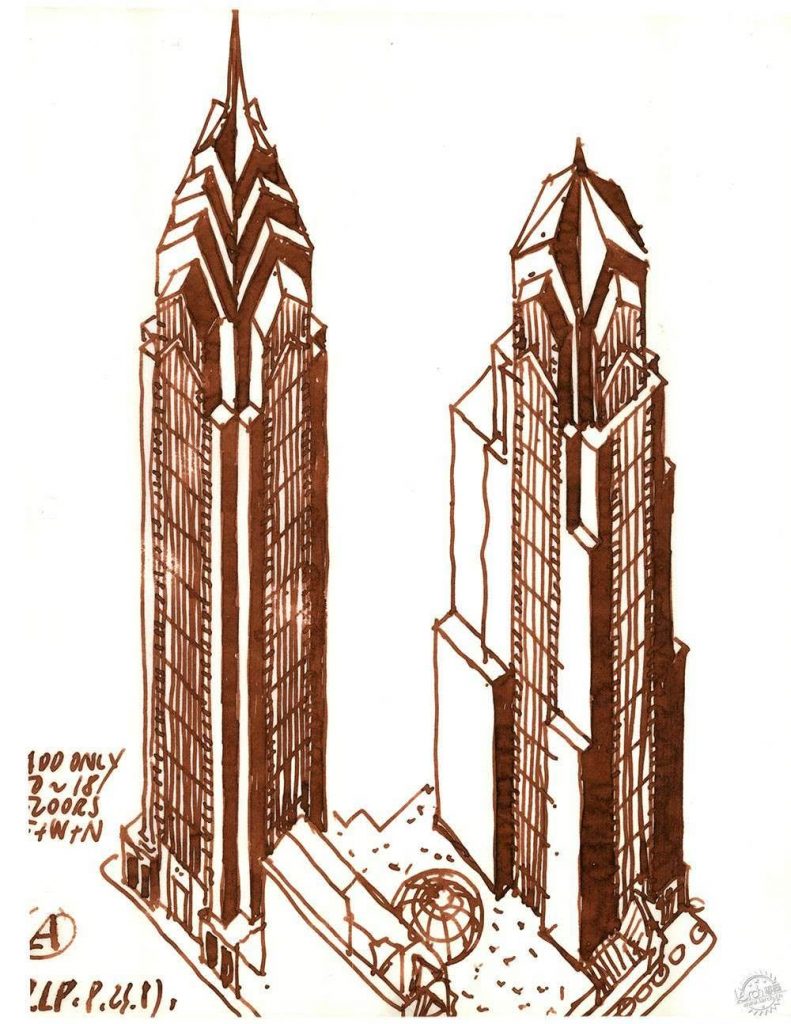 At the groundbreaking ceremony, an updated model of the complex was presented, with the mall and Shops at Liberty Place finalized. The model also reveals the final form of Two Liberty Place, though more stone cladding was planned to be integrated at the top. 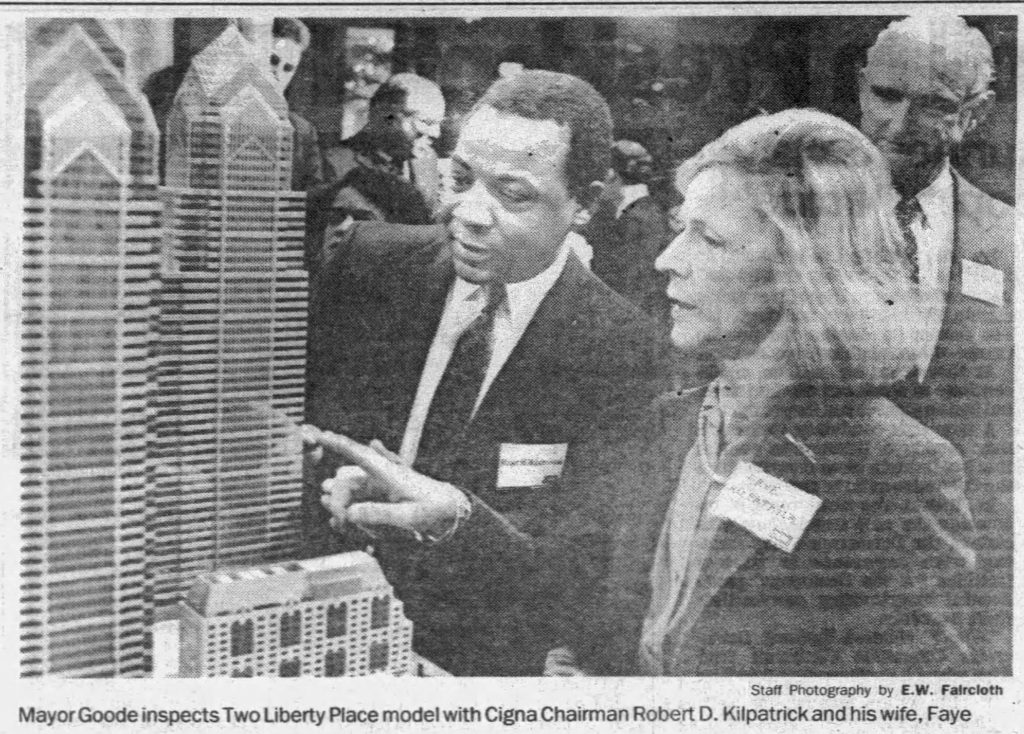 Mayor Wilson Goode with a model of Two Liberty Place in its final shape. Photo via Philadelphia Daily News 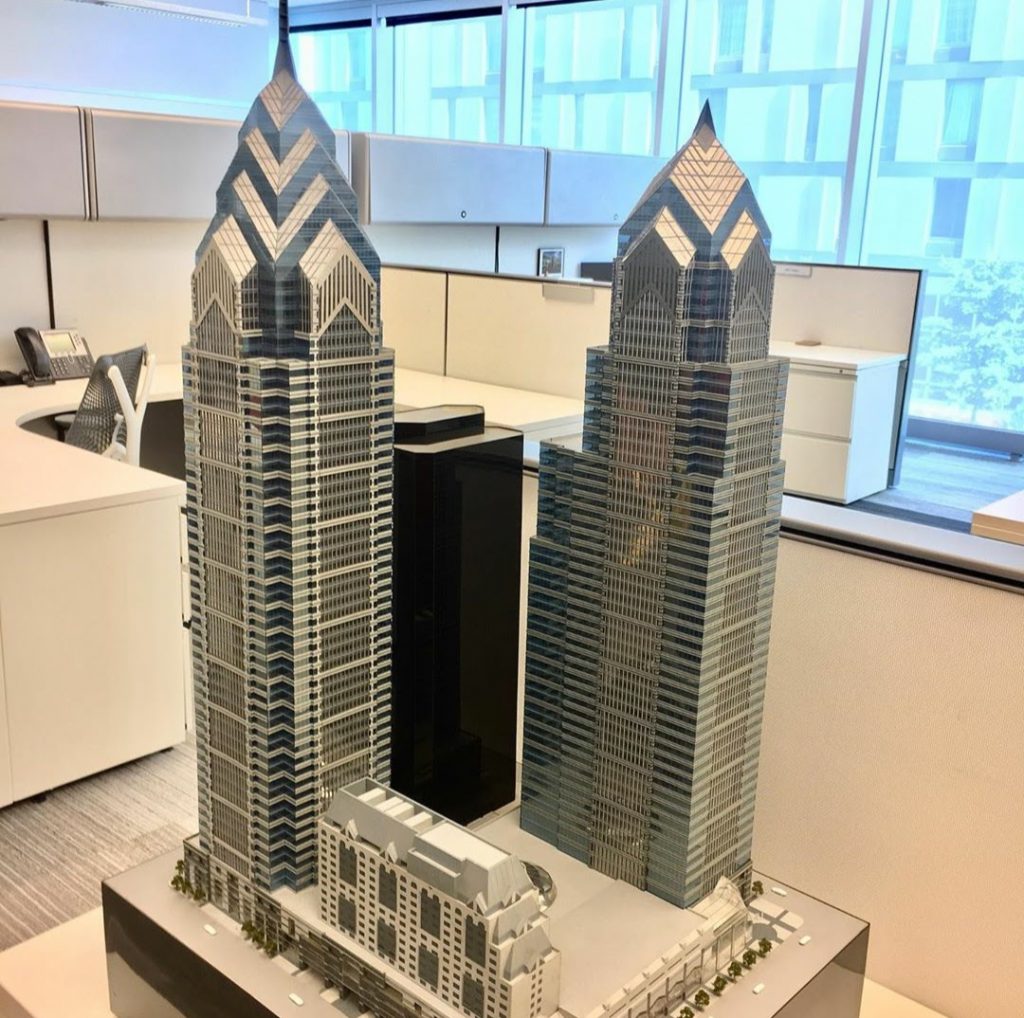 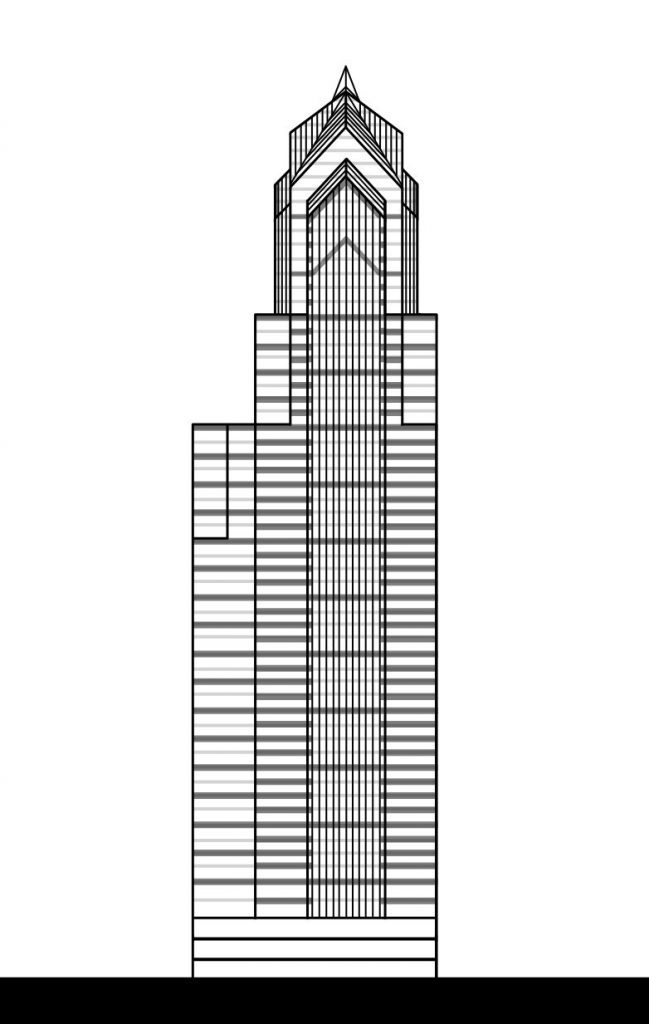 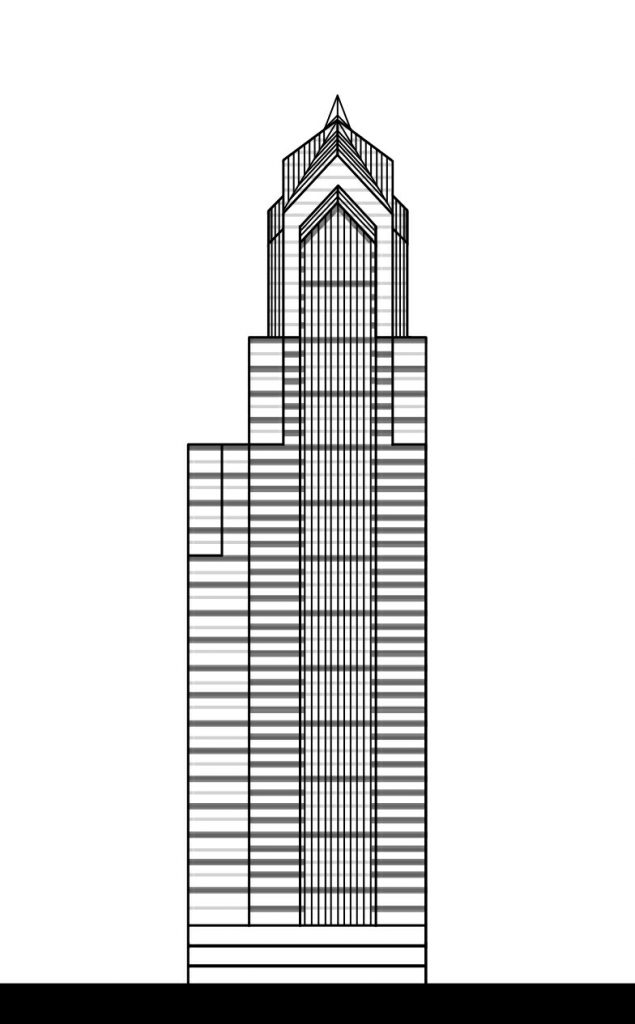 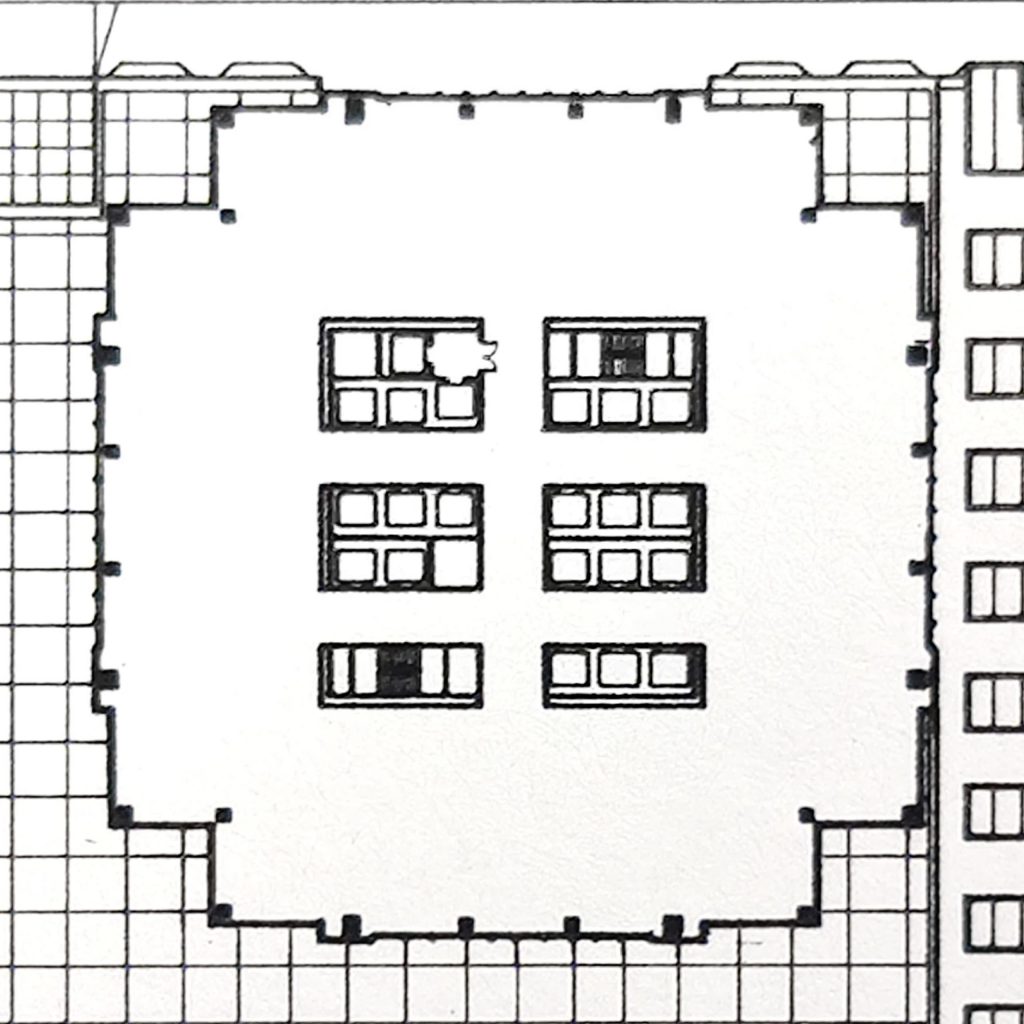 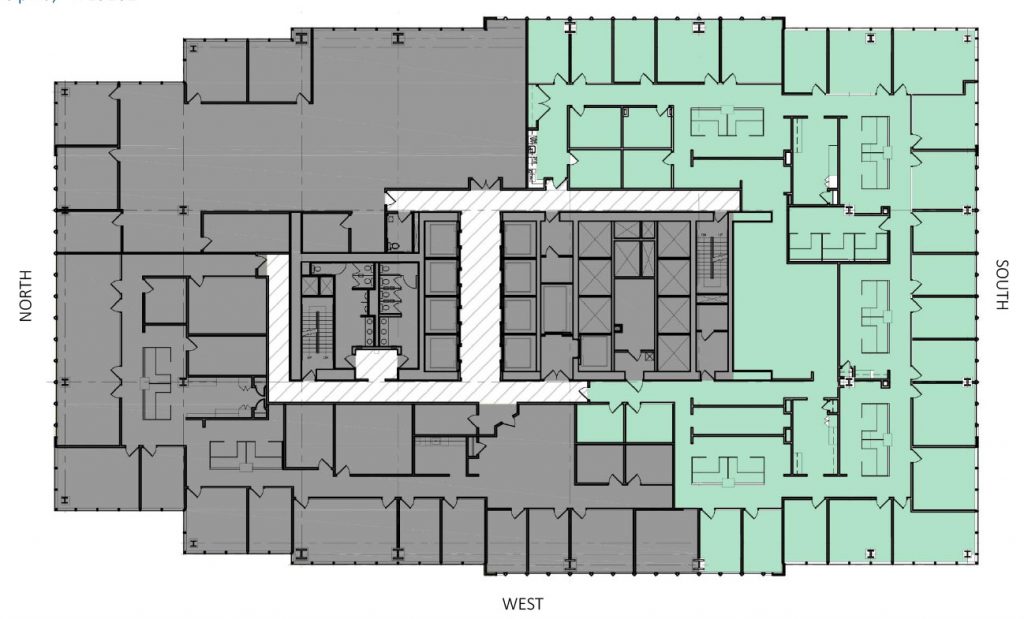 While the tale of One Liberty Place is relatively well-known, the story of Two Liberty Place and its irregular shape is less familiar to many, though it’s still a notable narrative as, to this day, the tower still dominates the skyline with its impressive height and floor space.

3 Comments on "Designing the Tower at Two Liberty Place"