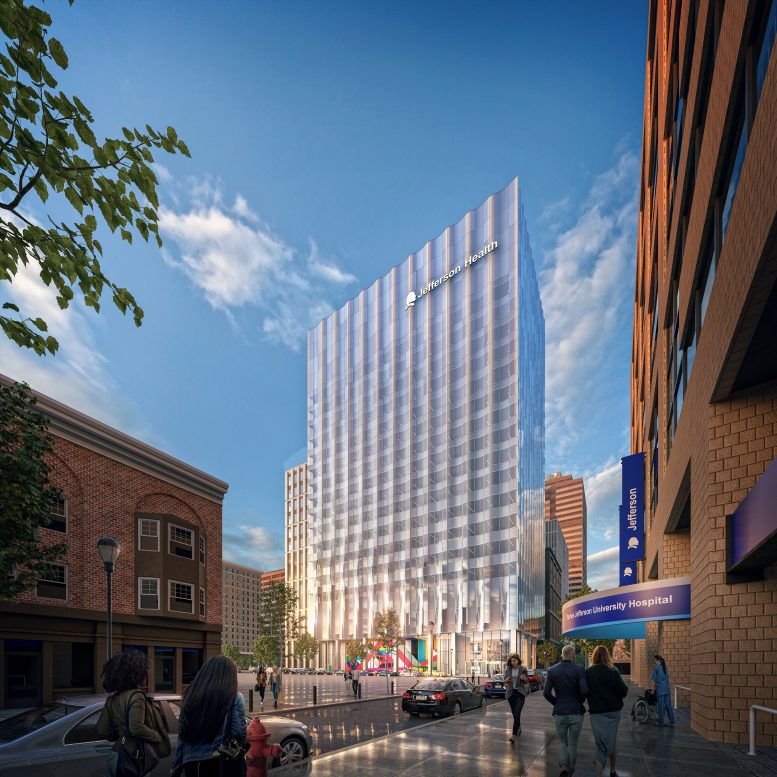 Over the course of the past year, Philadelphia YIMBY has provided continuous updates on East Market Phase 3 at 1101-53 Chestnut Street, the latest addition to the East Market development that has transformed the Market East neighborhood in Center City over the past few years. But even as construction work kicked into high gear, plans for the development continued to evolve. Earlier this year, we published an extensive review of the development’s original iteration. Developed by National Real Estate Development, it consisted of the 364-foot-tall Jefferson Health Specialty Care Pavilion at 1101 Chestnut Street, and a smaller, 288-foot-tall residential tower planned to the west. Today we look at the plan’s latest version, which updates the design for the medical tower and puts the residential component on hold, replacing it with a public plaza for the time being.

The design update, officially unveiled on September 14, 2020, presents a sleek update for the medical tower, known as Chestnut East in Civic Design Review submissions, and offers detailed information regarding the building. The structure appears to maintain its previous massing and height of 364 feet and 23 stories (19 main floors and four mechanical levels).

The floor area will span around 462,000 square feet. The building will feature over 300 examination rooms, as well as 58 infusion chairs, ten operating rooms, six endoscopy rooms, and imaging and lab services. A pharmacy will be included within the project.

The most noticeable change is the exterior design. The latest iteration shelves the prior arrangement of two-story-tall, staggered panels of alternating etched and fritted glass, angled in a gentle sawtooth pattern. In its place, the design introduces a curtain wall of undulating glass. The shorter western section appears largely similar to the previous variant. 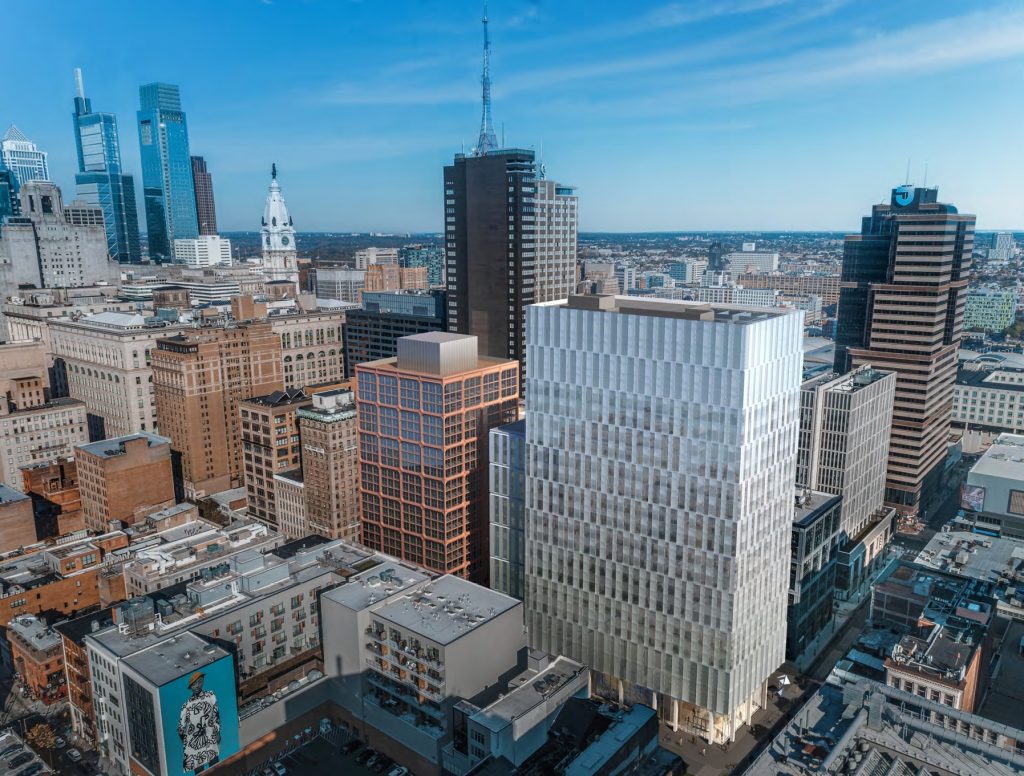 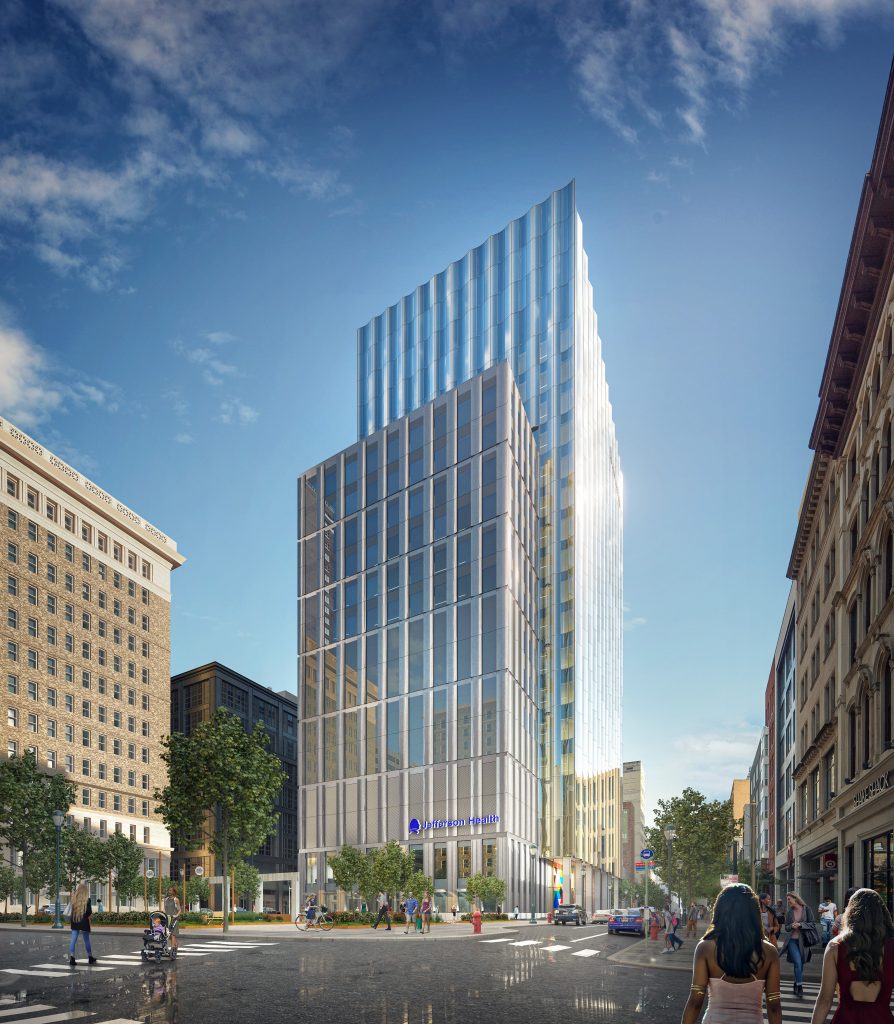 The building’s latest iteration, designed by Ennead Architects, maintains the earlier design approach that combines a conservative, institutional look with a soft, light-colored, airy appearance. The new version offers a more streamlined and structurally honest expression through unbroken vertical piers and clearly delineated floor plates. The undulating glass also offers a more sophisticated look, as it comes off as both more production-challenging and aesthetically pleasing than the prior staggered sawtooth pattern.

In the meantime, the site of the western tower, known as Chestnut West in Civic Design Review documents, has been transferred into direct ownership of Jefferson Health. As such, the medical services provider, rather than National Real Estate Development, is now in charge of decisions related to the site in the future.

As of now, foundations for the future high-rise, which are part of the three-level underground garage spanning both towers, are still being constructed. However, the red terra cotta-clad, square-themed residential tower designed by Morris Adjmi Architects is now on hold, and it is uncertain whether the design will be retained for any future development.

In its place, Jefferson Health will introduce a roughly 15,000-square-foot public plaza, which will feature plantings and outdoor furniture. Jefferson Health intends to activate the space with events. 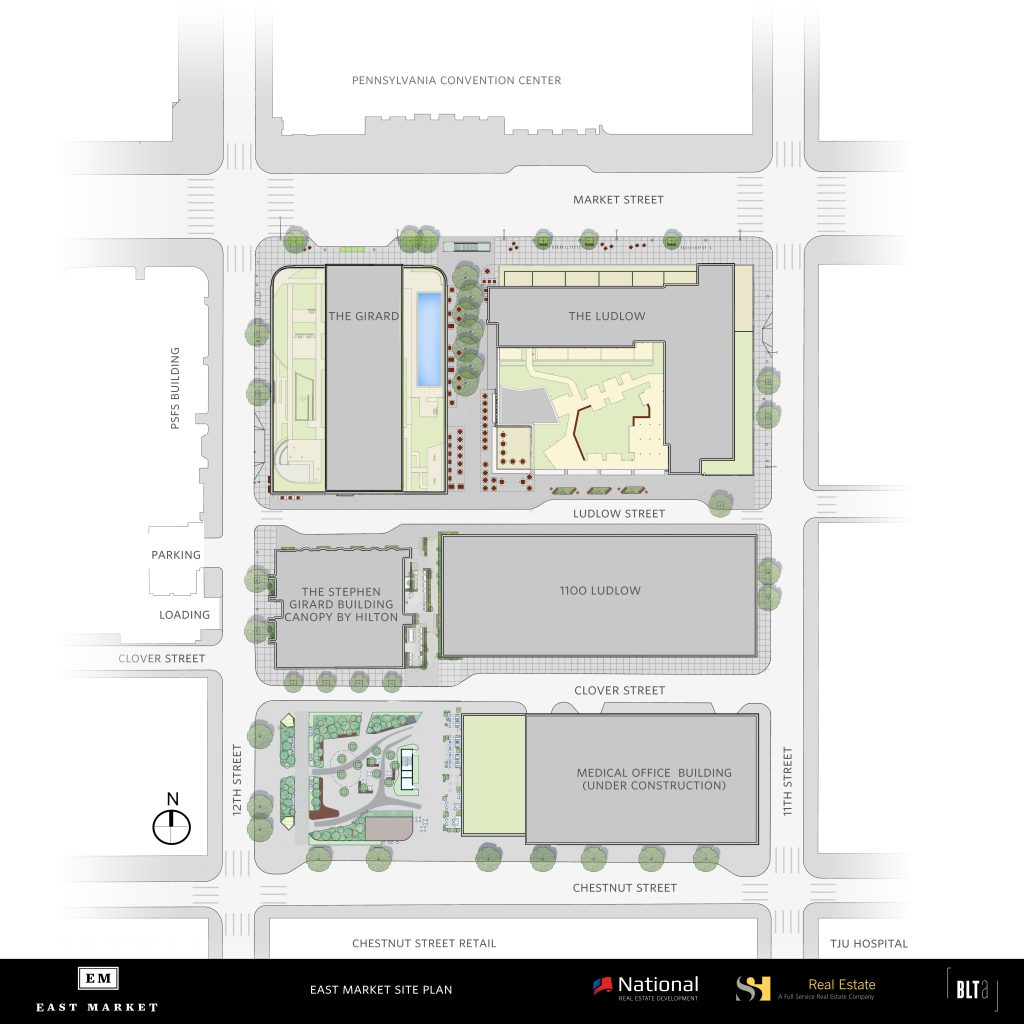 In our opinion, the news is the type of conflicting update where we want to “have our cake and eat it, too,” as both plaza and tower options will positively benefit the neighborhood. On one hand, the plaza will create much-needed open space on congested Chestnut Street, and will effectively anchor Chestnut Walk, a mid-block public promenade that runs from Market Street to Clover Street through East Market, and has already proven to be a popular public space in its few years of existence.

On the other hand, the site is perfectly situated for a residential high-rise, especially of one of the rare design caliber as the one that was proposed by Morris Adjmi. As a perfect outcome, we would like to see a tower at least twice as tall and half as wide, ideally one that maintains the original design aesthetic. The slimmer building would offer added light and air to the residences, while its loftier height would offer panoramic views for the residents while increasing the value for developers. Moreover, the layout would allow for the preservation of a large portion of the temporary plaza.

Of course, any future development at the western site is subject to both existing foundation layout and to zoning regulations, constricting the possibilities of what may be built at the location. At the moment, foundation work is progressing at the site. Regardless of the outcome, East Market Phase 3 is a welcome addition to Market East, and we look forward to seeing further development on the project.

1 Comment on "An Overview of the Latest Plan for East Market Phase 3 in Market East, Center City"