In the late 1800s, the city of Philadelphia made a bold move that greatly transformed and influenced both mass transit and the cityscape when they allowed Pennsylvania Railroad to construct a massive rail viaduct in Center City. One of the largest transportation projects in the city, dubbed to citizens as the “Chinese Wall” due to its appearance and presence, had a dramatic effect on the city’s planning for years to come. Designed by the Wilson Brothers, the rail line stood next to Broad Street Station, which sat on the current site of Dilworth Park, and stretched out all the way to West Philadelphia. The structure saw busy rail service for decades, yet it ultimately met its fate in 1953 after it was demolished to make way for future development. Today YIMBY presents an exclusive massing mock-up of how the structure appeared on the cityscape in 1945.

The project did not have an impact on the city skyline-wise, but it nevertheless held a significant presence. The viaduct originally included a huge shed just to the west of Broad Street Station, which caught on fire in 1923 and was replaced with smaller sheds. The station had closed down on April 27, 1952, and demolition began in 1953. The elevated railroad and station were completely demolished by 1955, and nine city blocks were left open and ready for development. 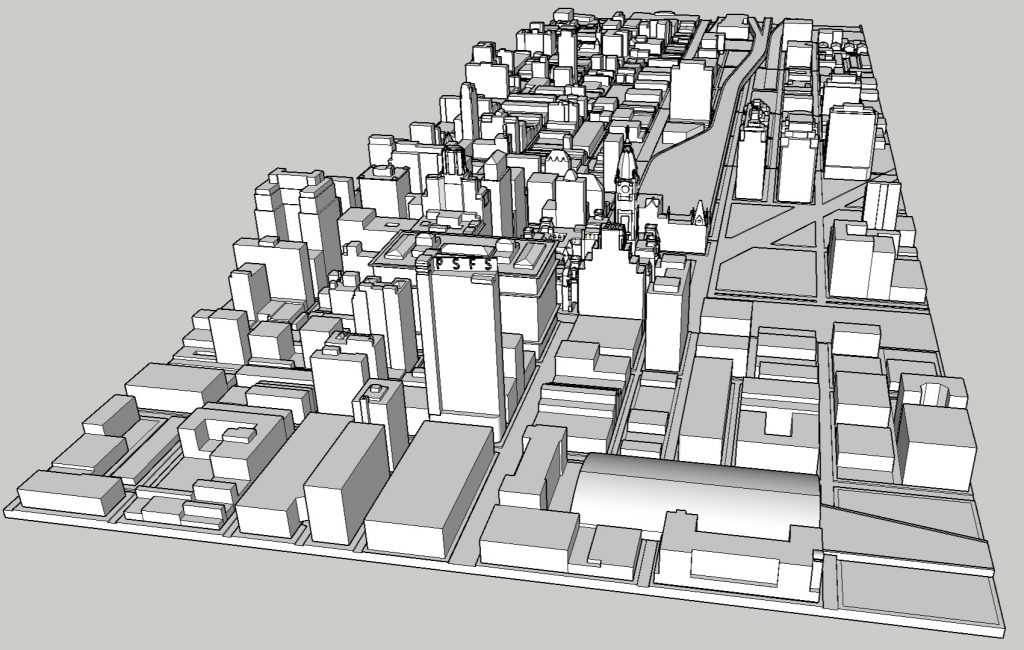 In the massing, one can clearly see the railroad that splits the city. The viaduct was elevated high above the streets and the structure thinned as it reached farther to the west. Looking east, the sky dramatically opened to show a lovely view of City Hall presenting itself to riders coming into the city. The southwest corner of the shed sat across the street from the current site of One Liberty Place. Eventually, buildings such as 1601 Market Street, Mellon Bank Center,, 1800 John F. Kennedy Boulevard, and more rose on the past site of the Chinese Wall.