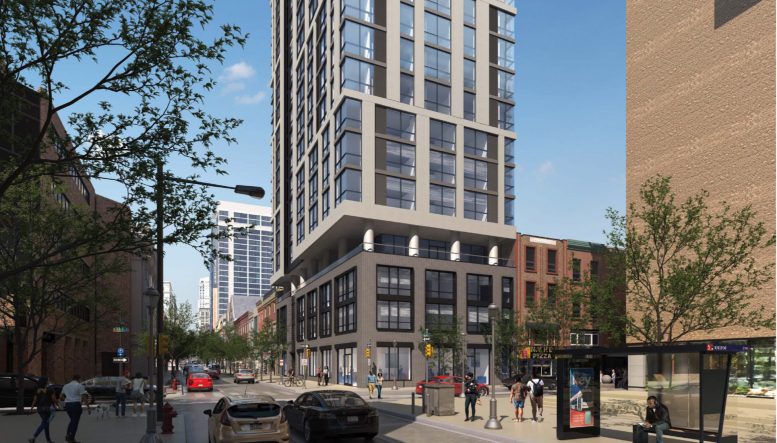 A revised design has been revealed for a high-rise tower planned at 1101 Walnut Street in Washington Square West, Center City. Designed by JKRP Architects, the revised plan will rise 18 stories and include 198 residential units, with a total of 138,150 square feet of space, located on the second, third, and fifth through eighteenth floors. The ground floor will hold 4,420 square feet of retail space and the fourth floor will offer 6,281 square feet of office and amenity space. The project will also include 34 off-site parking spaces, as well as 68 bicycle spaces. 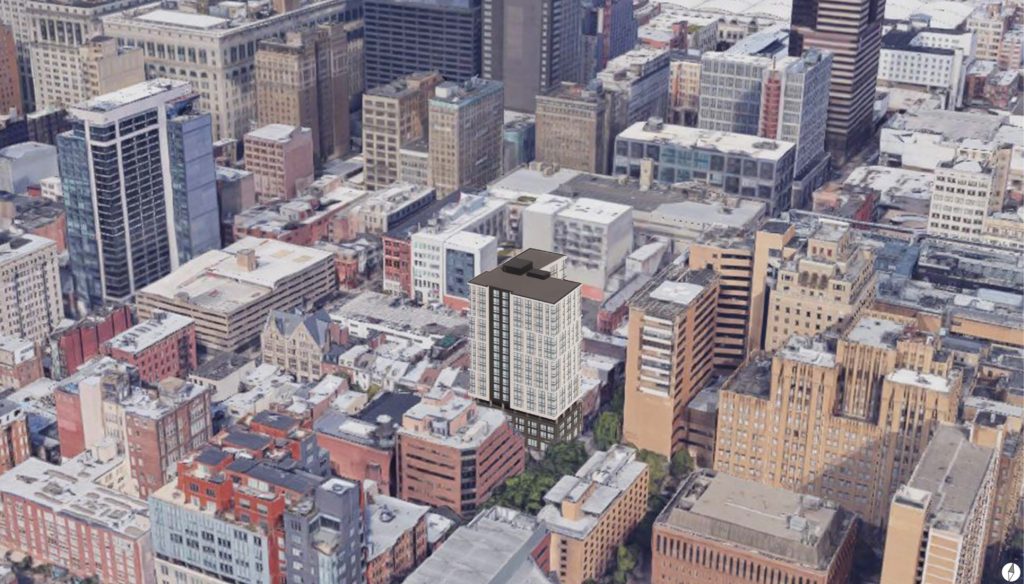 The tower will feature a modern exterior with materials similar to those of the prior design. The ground through the third floors will offer a solid design easily noticeable from the street, with gray brick paired with large windows and black trim. Above, light gray cladding will be used as the primary material, with intermittent sections of black cladding adding texture. Large windows will ensure that ample natural light will reach the interiors. 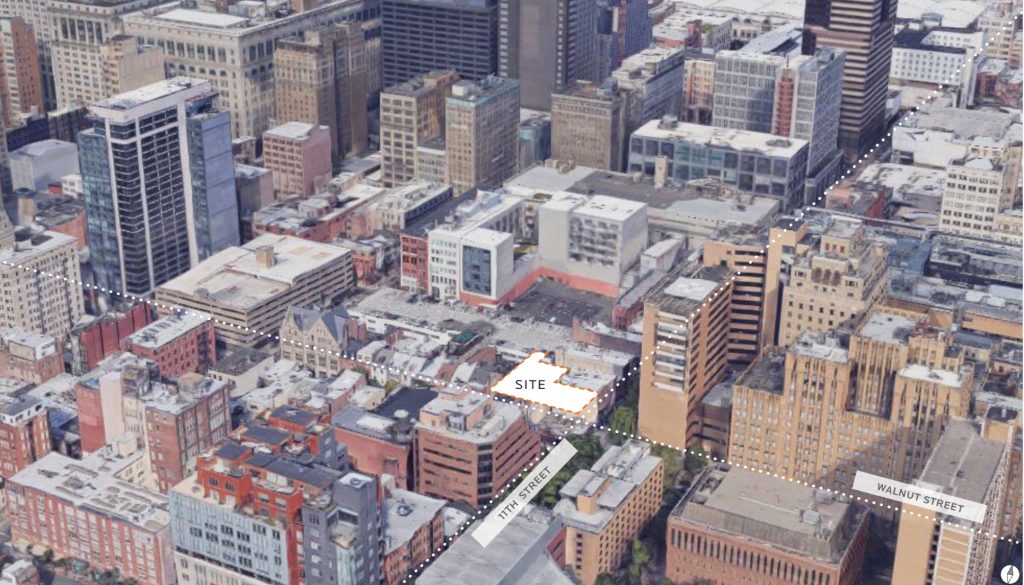 The high-rise will replace a somewhat underwhelming set of buildings, which include a single-story fast food restaurant on the corner and an attractive rowhouse to the west. Unfortunately, buildings up to 1107 Walnut Street will also be razed to make way for the tower. However, many of these buildings have already been demolished for some time, with the site now largely clear and sitting dormant, waiting for the updated plans to move forward.

Former plans called for a tower rising 259 feet and 23 stories tall. The five-story drop is somewhat disappointing, although the project did pick up more density, with 198 units currently projected to be within the structure, while former called for 111. 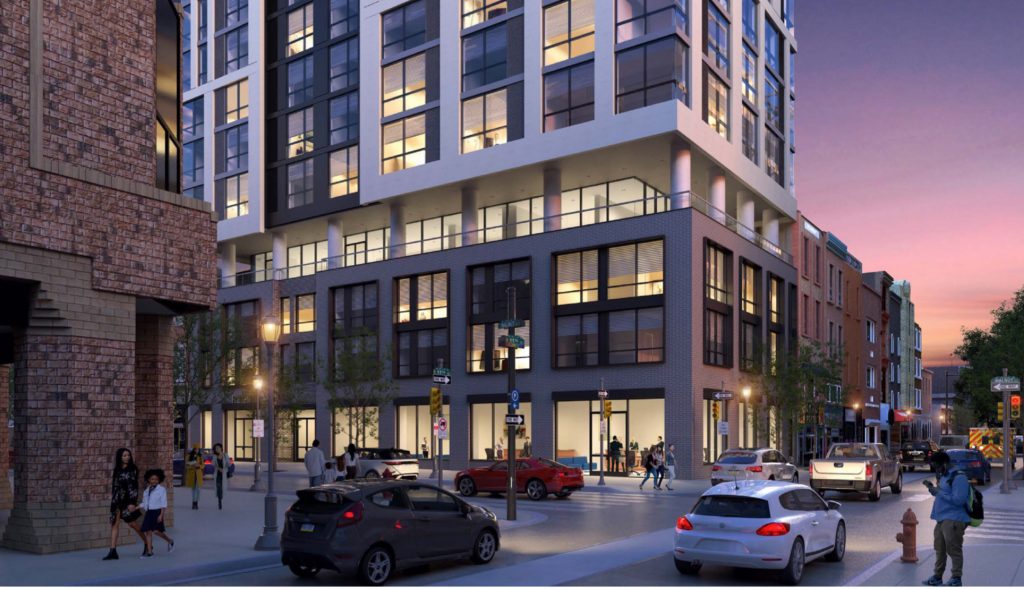 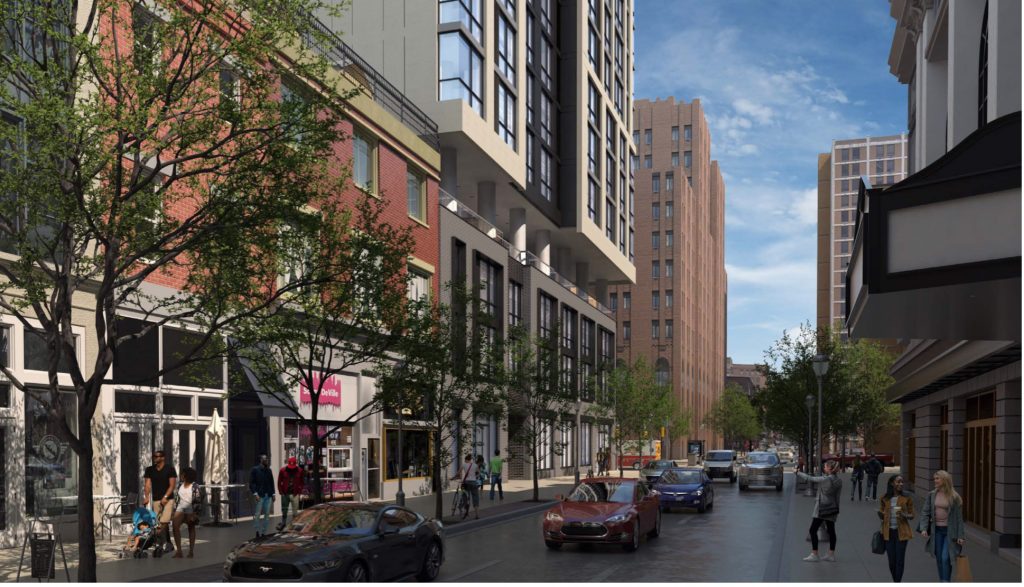 Despite the height decrease, the tower will still be a major improvement for the site, adding numerous residential units on a lot that has never held anywhere close to such a number of residences. And despite its shorter planned height, the 18-story structure will still be a major increase over the former occupants of the site and will better utilize the prominent location.

The building will stand in an area that is packed with new high-rise development. Just to the north, demolition work is well underway to clear the site for 12 + Sansom, a tower that will rise more than 200 feet and contain over 400 residential units. Just to the north, construction work is underway for East Market Phase 3, where the The Thomas Jefferson Specialty Care Pavilion is making rapid progress, with another residential unit totaling over 300 units potentially planned to rise next door.

Philly YIMBY will continue to track progress made on the development.