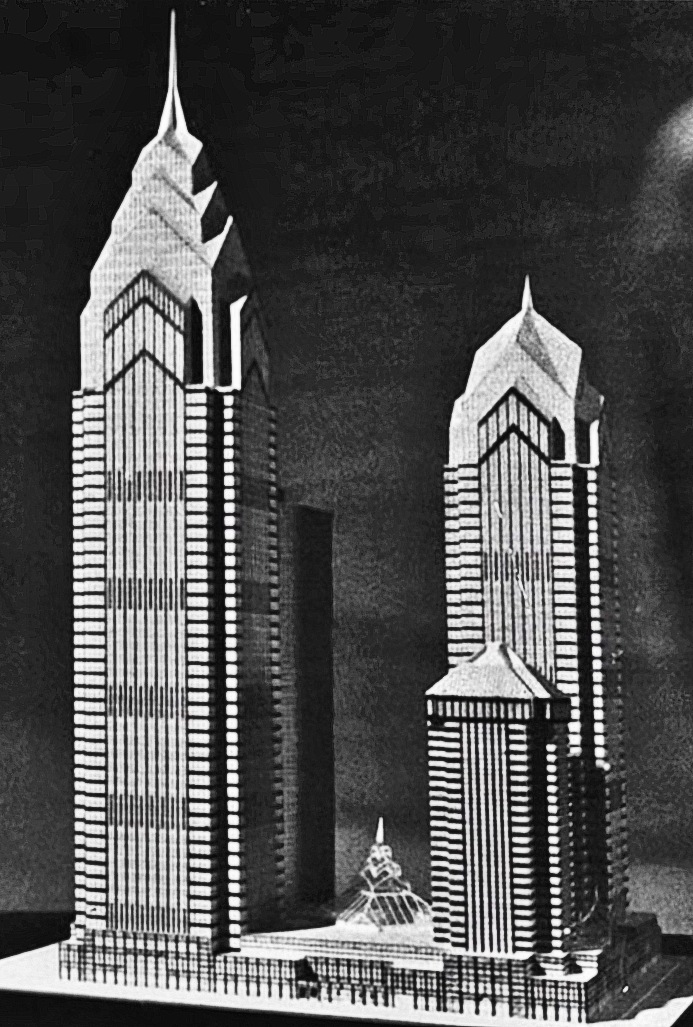 The Liberty Place complex is emblematic of the Philadelphia skyline as they played a key role in Center City‘s skyscraper growth. The towers currently stand 61 and 58 stories tall, with angled sharp crowns pointing toward to the sky, one tower capped with a tall and another with a short spire. The project was commissioned by Willard G. Rouse III of Rouse and Associates, who had originally pictured a $150 million 38-story tower rising to a height that measured somewhere under 500 feet. Just days after New Year’s Day in 1984, the building was first discussed in a publication about how Rouse won the bid for the site how it may become the city’s premier office tower. The architect, Helmut Jahn, was selected in March, and had produced a rapid succession of concepts under 500 feet, which eventually evolving well above that height. Today we share exclusive massing concepts of how the skyline would have looked if the towers were built to their originally planned height.

The first design rises to the top in steps with the corners cut and the faces slightly slanted inward, with an angled top capped with a short spire. The unique building would dramatically stand out if built, clad in glass with stone at the corners, reflecting the sky with its bright materials.

The second design featured rounded corners clad in dark glass, with boxy sides parallel with the streets that were to feature a stone pattern that were set back near the top. The corners would come together above the steps to form circular floor plates, in a theme that would harmonize with 1600 Market Street. The building then shrinks a few stories above and is topped with a small spire.

The last design doesn’t seem so out-of-this-world compared to the other iterations, and looks slightly brutalist. The structure would be quite blocky with slightly cut corners, clad mostly in stone with a blocky, stepped crown that appeared to be clad with glass. The first terraces would have stone-clad extensions next to the cut corners. The building was topped with a very short spire with a sphere at the top.

One Liberty Place in the skyline. Image and models by Thomas Koloski

As we know today, the final version that was built appears quite different from these early iterations.