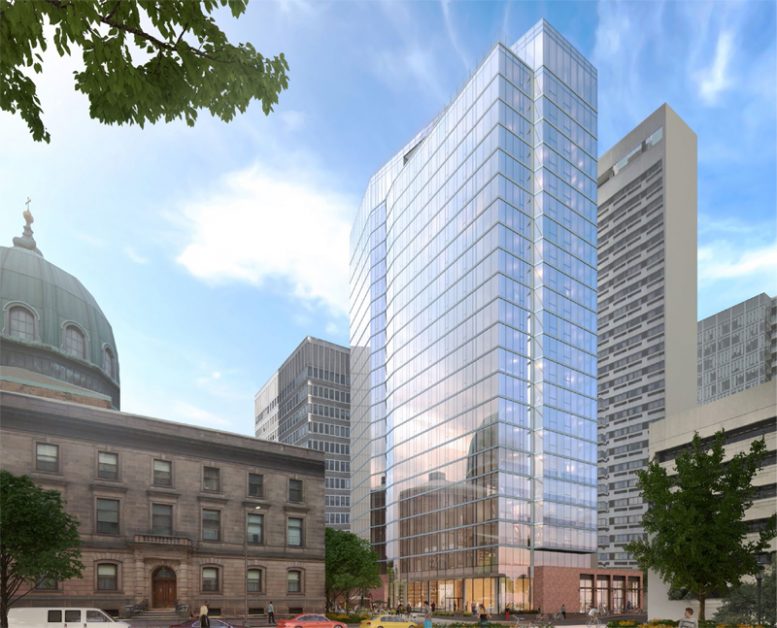 The first phase of the Cathedral Square development is underway and rising at 222 North 17th Street in Logan Square, Center City. The building, at this time known as Cathedral Square Phase 1, will rise 245 feet and 23 stories tall. The tower is designed by Solomon Cornwell Buenz, which had also designed the Murano condominium and The Laurel Rittenhouse, which is currently under construction. The two-tower complex is being developed by the Archdiocese of Philadelphia and Exeter Property Group, which will span much of the city block that is situated three blocks to the north of the Comcast Center.

In the previous update on the project, the building had reached a milestone as it was just beginning to rise above ground, after the completion of its single basement level. The first poured concrete floor has been constructed, with the ground floor slab topping the foundation. The beams for the first floor above ground were poured and the concrete forms were starting to rise on the south side of the site. The tower’s construction was in full swing now that the crane was in place.

The structure has grown more since the last update, as the building now stands three stories above ground. Workers are now seen all around the site. During YIMBY’s site visit, several concrete trucks were lined up on the south side of the site as concrete pours were inn progress. The tower crane can be seen from many blocks away, including from Arch Street just to the west of the Benjamin Franklin Parkway. With the pace of the construction, it appears that the tower may be topped out by the end of the year.

Completion of the structure is anticipated by 2024.