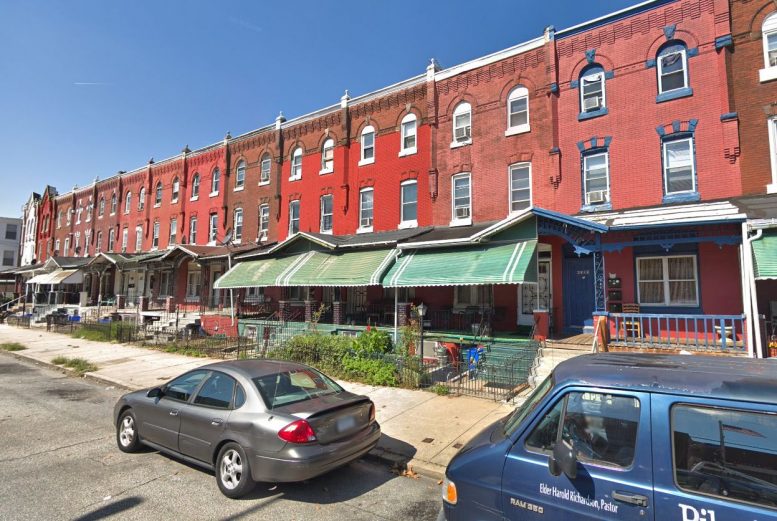 Permits have been issued for the renovation and a single-story vertical extension for a three-story rowhouse at 4309 Westminster Avenue in Belmont, West Philadelphia. The building, situated on the north side of the block between North 43rd Street and Belmont Avenue, is part of a block-long ensemble of prewar rowhouses. The project will cover 3,080 square feet of existing interior space and add 767 square feet of new construction, and will feature three residential units as well as an accessible green roof. Permits list Horace Andrews as the owner, Christopher Menna as the design professional, and Terox Electric & Construction Corp. as the contractor. Construction costs are listed at $50,000.

In recent months, YIMBY, as well as other local news outlets, have voiced concerns regarding the city’s current development climate that effectively encourages demolition of existing prewar buildings in order to replace them with only marginally larger structures. In contrast, the development planned at 4309 Westminster Avenue is shaping up to be a prime example of how to conduct such small, incremental development the right way.

The renovation will preserve and rehabilitate a stately rowhouse that is an integral part of the street ensemble. Replacing it with an entirely new structure, no matter how well-designed, would have ruined the composition’s integrity. Instead, unless there is some unnecessary plan to strip and replace the existing facade, the plan will upgrade the aged property, likely remove some of the garish additions such a metal canopy at the front, and preserve the building’s notable features, such as the deep covered porch, arched windows with voussoir stones, a corbeled brick cornice, and cantilevered, angled piers at the corners.

Numbers listed in the permit indicate that each existing floor averages slightly over 1,000 square feet in area. By contrast, the additional space spans only three-quarters of the area, indicating that the added fourth floor will be more compact than the rest and may be set back from the street, which would preserve the established cornice line on the block.

Permits also call for 11 bicycle parking spaces, which is odd as the building will house only three apartments. Not that we’re complaining about extra bicycle accomodations.

This type of development is laudable as it preserves a prewar structure, upgrades it to the latest standards, responds to the neighborhood’s growing housing demand, and ostensibly saves the builder from the superfluous expense of a complete demolition and subsequent ground-up construction, as indicated by the comparatively low construction cost listed in the permits.

3 Comments on "Permits Issued for Renovation and Vertical Extension at 4309 Westminster Avenue in Belmont, West Philadelphia"