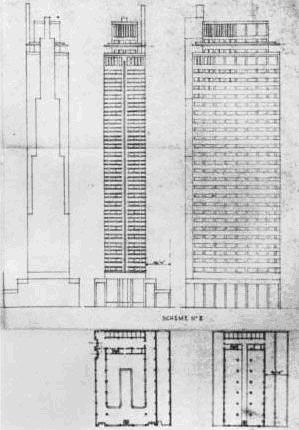 In recent weeks, Philadelphia YIMBY has shared a series of publications on the historic PSFS Building at 1200 Market Street in Market East, Center City. Yesterday we looked in detail at the first iteration of the building designed by architects George Howe, but eventually William Lescaze partnered with him in 1929 to create more schemes. In this feature, we present massing renderings of the second design. The roof height of the current building stands 491 feet above the ground, which is likely as high as the iterations analyzed here would have also risen.

The tower slightly resembles the current structure that stands at the site, since the early design also features a wide profile stretching north-south. The bottom floor plates above the base form a rectangle, but the south side steps up near the top to form slightly smaller floors. The structure on the south side rises above the roof and is pulled in to the north, forming an extension that resembles the lantern atop the Comcast Technology Center, with a chimney-like protrusion on the southwest corner of the roof.