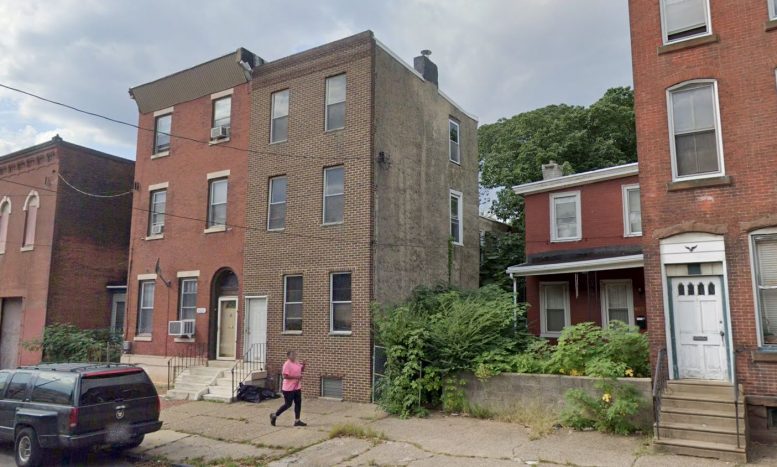 Permits have been issued for the construction of a four-story, seven-unit multi-family building at 4021 Haverford Avenue in Haverford North, West Philadelphia. The development will replace a three-story rowhouse located on the north side of the block between North 40th Street and North Preston Street. The new building will span a ground footprint of 2,413 square feet and will offer 10,134 square feet of interior space, which translates into generously-sized apartments measuring well over 1,000 square feet each. The structure will also feature a basement and full sprinkling. Permits list Mustafa Sencan as the owner and American Reliable Tasks Contracting as the contractor. Construction costs are specified at $1,257,000.

While a number of new developments have risen in the immediate area in recent years, the building will be the first postwar addition to a block consisting of prewar buildings on either side. Of these, most are rowhouses, though there are exceptions such as a stately yet shuttered, tall-ceiled, two-story warehouse at the western end of the block at 4027-29 Haverford Avenue (developers take note: the property appears ideal for a loft conversion). 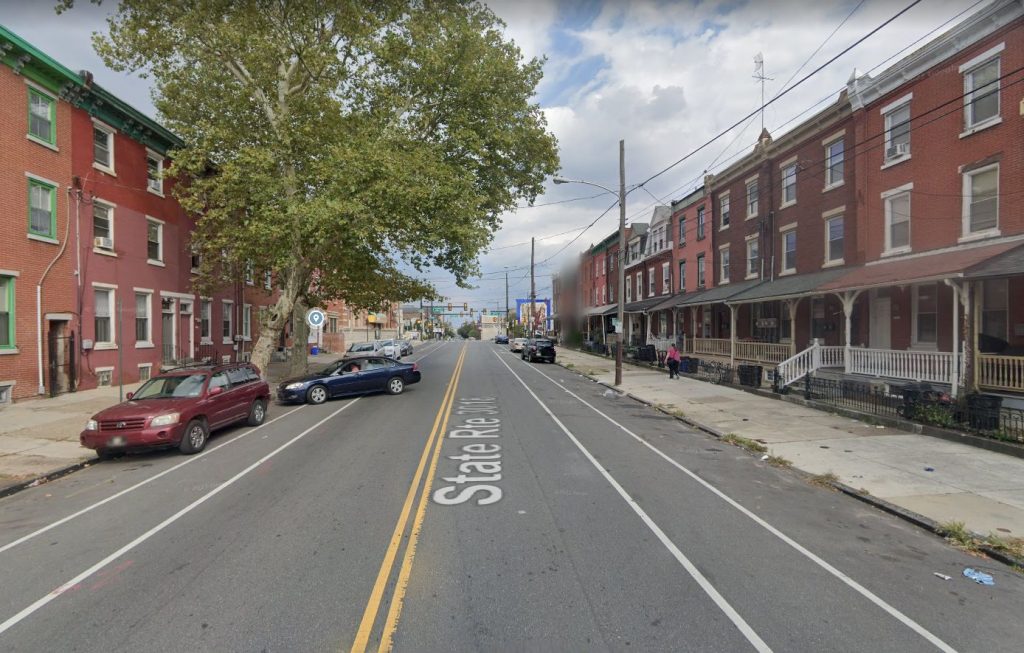 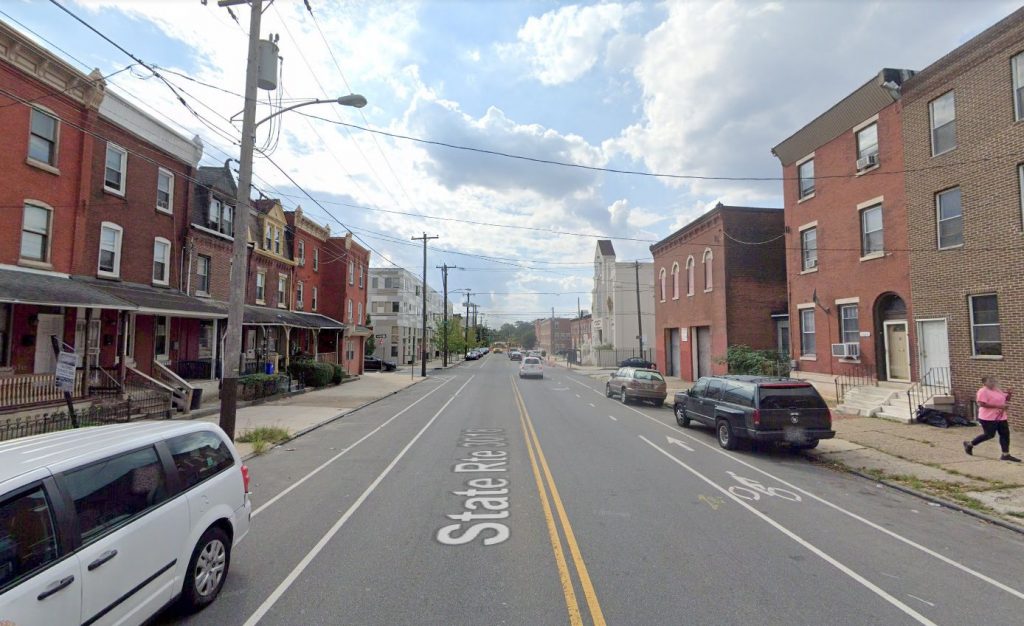 Across the street to the west stands the United House of Prayer for All People, a white-painted house of worship that combines a traditional massing with Art Deco and Midcentury Modern elements that include statuary, geometric ornament, and a radiant, multi-colored panel as the centerpiece of the facade. 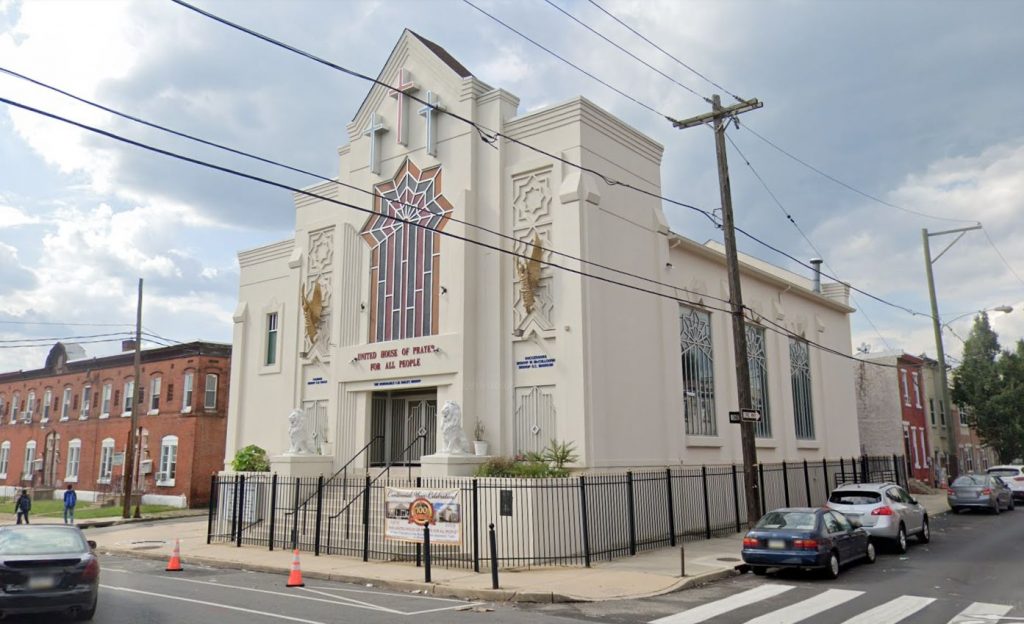 The United House of Prayer for All People. Credit: Google Maps

Also impressive is the edifice situated at the other end of the block at 600 North 40th Street (alternately 4000 Lancaster Avenue). Designed by architect Walter Smedley (founder of the T-Square Club, which became a notable institution among American architects) and built around 1897, the three-story structure, formerly known as the West Philadelphia Title and Trust, is an exercise in grand civic design.

The eclectic Renaissance structure boasts a rusticated stone base, a red-brick facade with white stone detailing, and large arched windows with floral metal grates and stone trim. Blind oeil-de-boeuf windows sit between the arches. The cornice is adorned with strips of floral patterns, dentil and egg-and-dart courses, and ornate brackets. 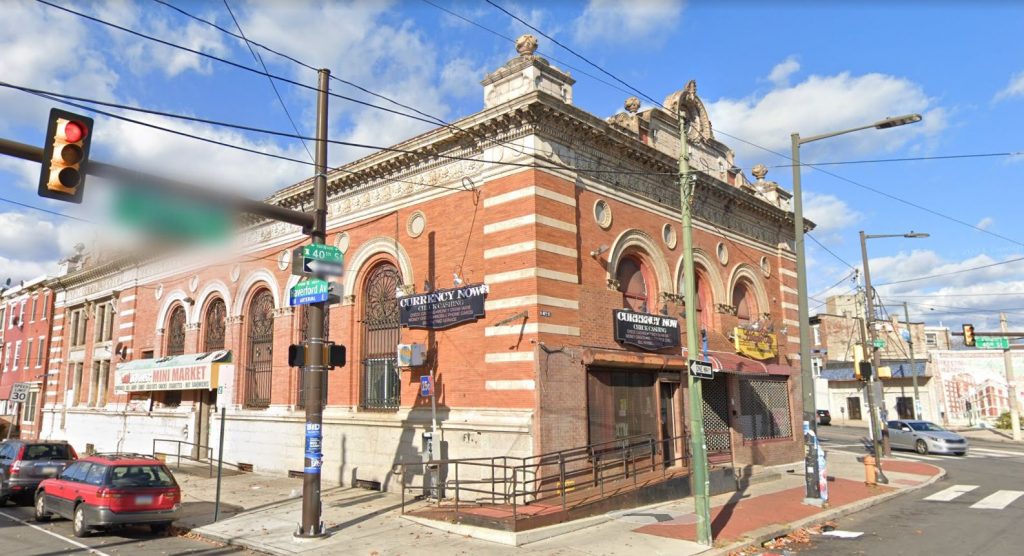 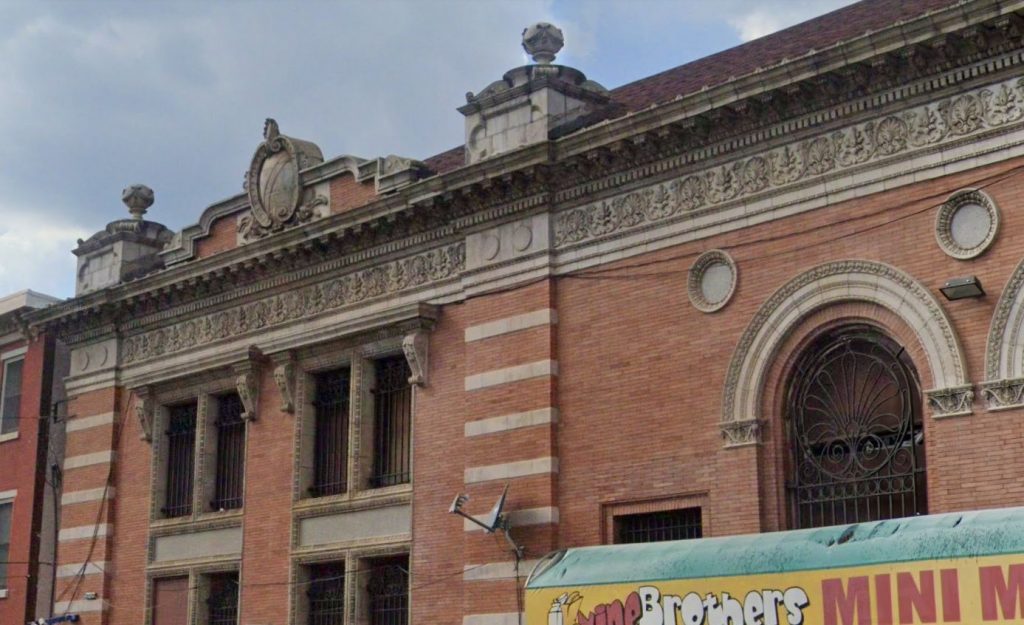 At the moment, budget retailers occupy the building, but thankfully its ornate facade remains largely intact. Around 2009, a large billboard at the front facade was removed, revealing a triumphant tableau bearing the structure’s original name, as well as stone orbs, scrolls, and a circular aperture at the center. 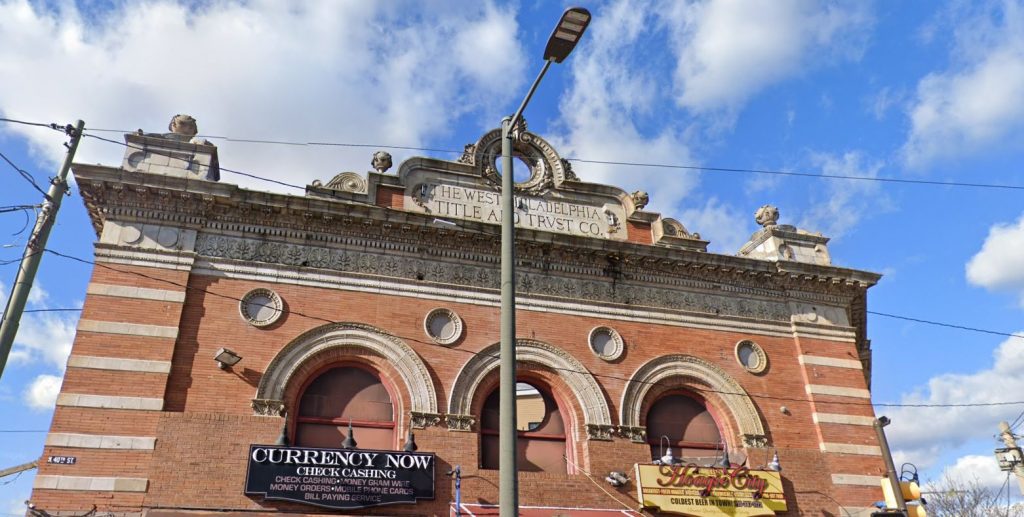 The building has a jubilant presence on the streetscape and adds charm to the triangular square formed by the intersection of Lancaster Avenue, Haverford Avenue, and North 40th Street. The intersection is approximately the confluence point of four neighborhoods: Haverford North to the west, West Powelton to the south, Mantua to the east, and Belmont to the north.

Since around 2010, a bust of Rev. Martin Luther King, Jr. stands in the center of the square, alongside a historic marker marking the Freedom Now rally, which the Reverend held at the intersection on August 3, 1965, in front of a crowd of 10,000. A mural on the south side of the intersection illustrates the rally’s energetic spirit. 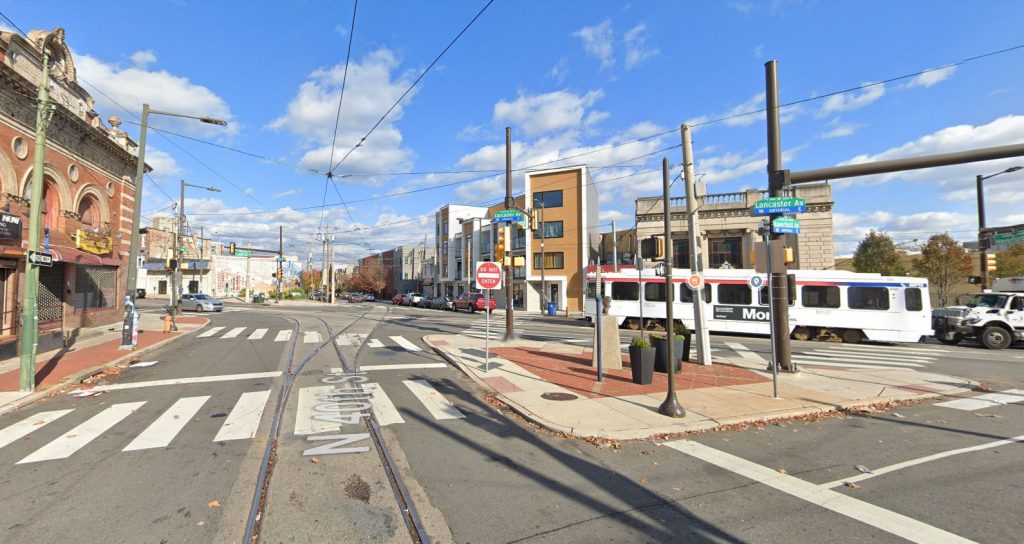 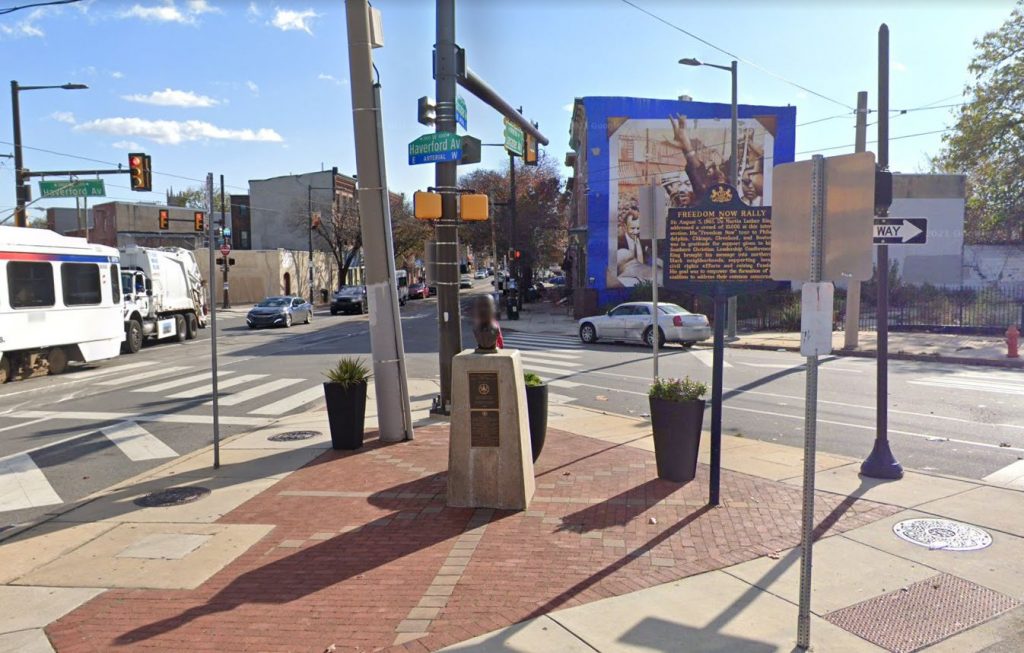 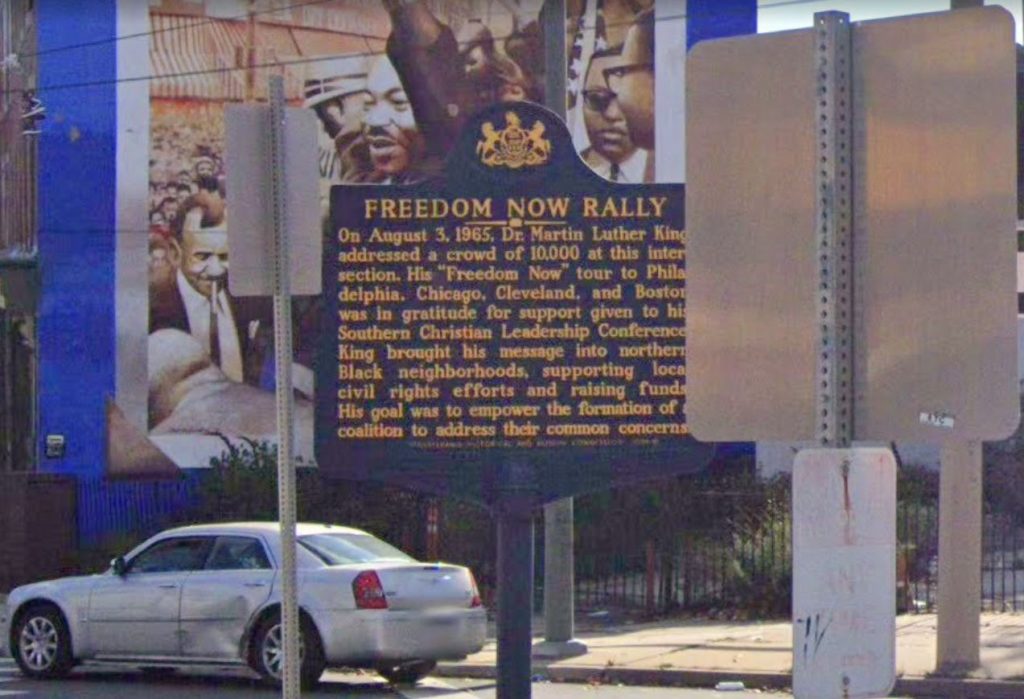 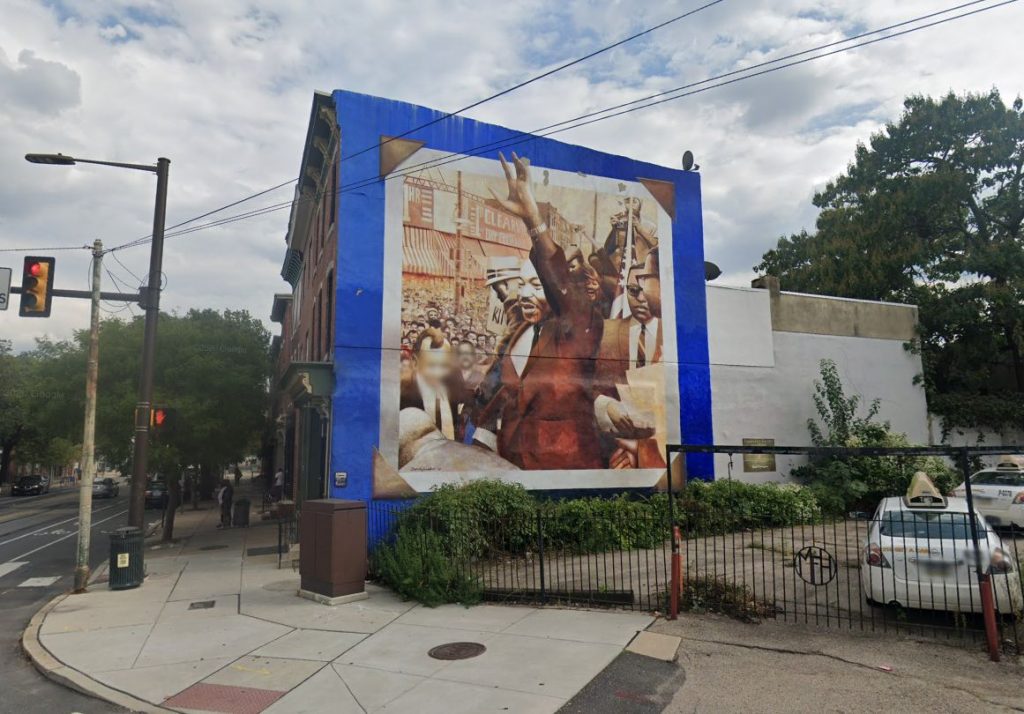 Another mural on the north side of the square, situated at a small landscaped plaza, welcomes visitors to Belmont and commemorates Lincoln Highway, the nation’s first transcontinental automobile route which ran from New York City to San Francisco and traversed a part of Lancaster Avenue. 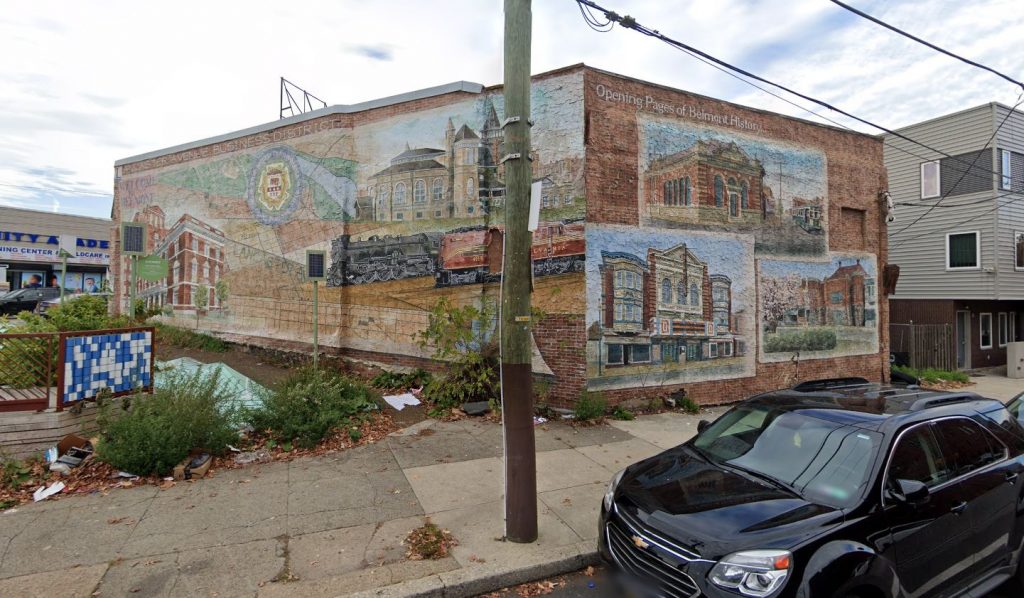 In contrast to these local landmarks, the building at 4021 Haverford Avenue, which is to be demolished, is entirely unremarkable. Although it appears to be a prewar structure, its front facade seems to have been stripped years ago and replaced with a bland, featureless brick exterior. Unless the replacement is a complete eyesore, pretty much any design that will be built here will be an improvement.

Also of note is the neighboring structure to the east, where a semi-detached two-story rowhouse set within an overgrown garden at 4019 Haverford Avenue is set for demolition, as we reported in September of last year. The property is somewhat reminiscent, albeit arguably less intriguing, than a similar semi-detached structure located nearby at 890-92 North 42nd Street, which is also about to be demolished. We covered the development yesterday.

The neighborhood is already densely built and thriving, and with the ongoing construction surge in West Philadelphia and the area’s proximate location and convenient transit access to booming University City, we expect to see continued growth in the area. We welcome new proposals that will certainly arrive on the surrounding blocks in the near future, though we also hope that the city strengthens preservation regulations for the neighborhood’s notable buildings.