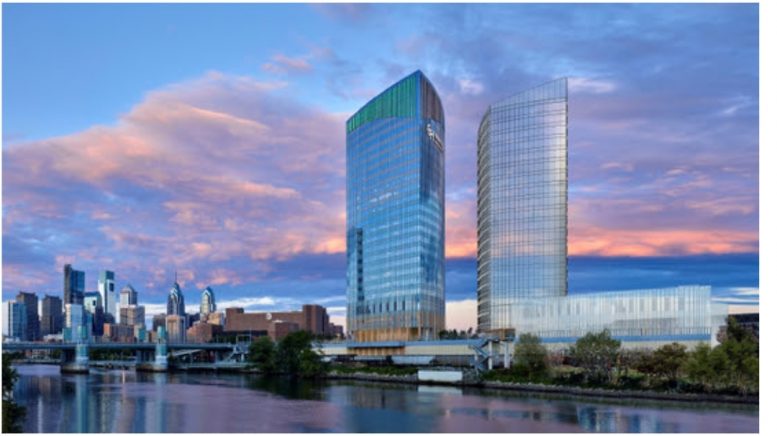 The Children’s Hospital of Philadelphia is in the process of a $3.4 billion expansion in West and South Philadelphia. The latest proposed structure is the Roberts Center for Pediatric Research Phase 3, a 350-foot-tall tower planned at 730 Schuylkill Avenue in the western section of South Philadelphia’s Graduate Hospital neighborhood, which is also known as Schuylkill Grays Ferry and Devil’s Pocket. The new structure will stand as a fraternal twin to the first phase of Roberts Center, a 375-foot-tall building completed in 2017. Project information remains sparse, but the design will likely be led by the office of Pelli Clarke Pelli, which designed the first phase.

The design reveal for Roberts Center shows two additional building structures to the southwest, faded in suggestion of a future phase. As stated above, the design for Phase 2 is very similar to that of the original tower, with curved walls, sharp corners, and angled rooflines, yet subtle differences are noticeable. The new building will feature a long, four-story podium that extends about 250 feet to the south. Notably, this plan conflicts with the future towers hinted at in the conceptual images, since the podium would presumably take their space.

The curvy south façade of the existing tower connects to a slanted podium topped by a landscaped plaza. The southern wall of the podium is curved in a shape that mirrors that of the original building, which hints at the future massing and location of the new building.

Given the complete lack of tall buildings in the adjacent area, the high-rise pair will feature prominently from many viewpoints, most notably when driving on the Schuylkill Expressway.

Be the first to comment on "CHOP’s Roberts Center for Pediatric Research Phase 3 to Rise 350 Feet in Graduate Hospital, South Philadelphia"