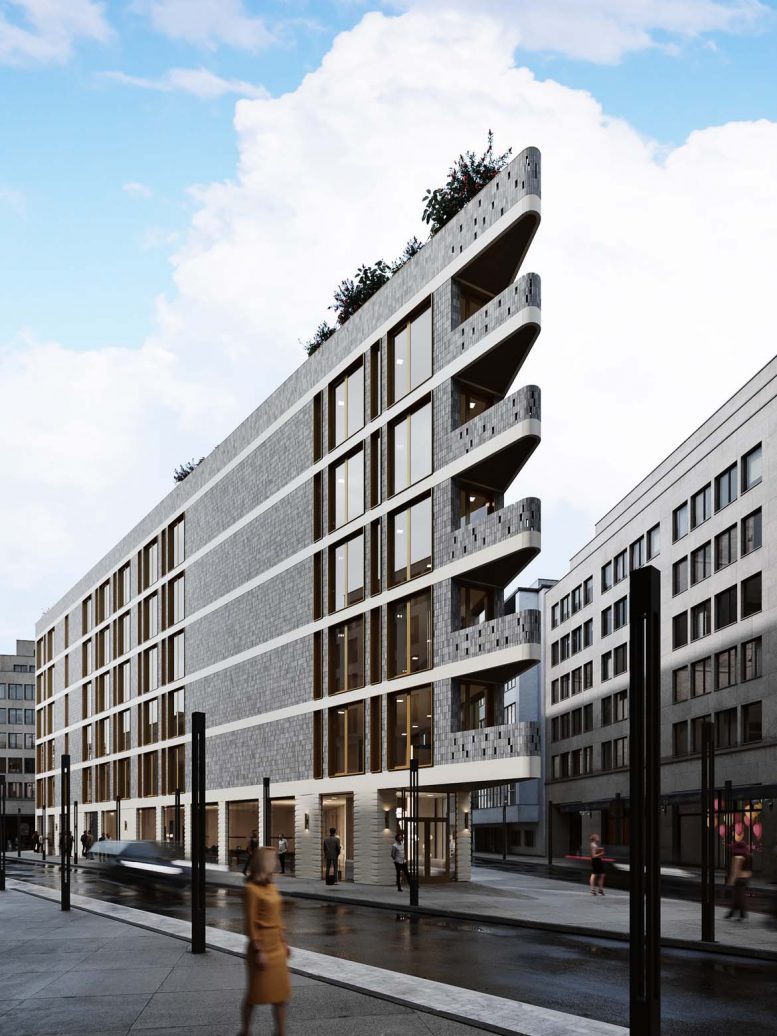 A rendering has been released for a six-story, 50-unit residential building at 1102 Germantown Avenue in booming Northern Liberties section of North Philadelphia. From Stamm Development Group, the wedge-shaped building will feature amenities such as a fitness center, nine parking spaces, and a green roof, which combined with mixed-income bonuses, has allowed the developer to boost the proposal’s height and square footage.

The structure features one of the most eye-catching designs of any project currently on the city’s drawing boards. The proposal spans a near-triangular plot with a sharp corner at the intersection of Germantown Avenue and North American Street. The site also features minor frontage along North 2nd Street in its eastern corner.

The concept is a contemporary take on New York’s Flatiron Building, with a sharp prow resembling that of an ocean liner. Daniel Burnham’s masterpiece made use of Neoclassical architectural detailing. In contrast, 1102 Germantown Avenue appears at once avant-garde and retro.

Wide bands along the floorplates provide a bold contrast to walls of soldier-course gray brick and bronze-framed windows and lend the building a sense of dynamic horizontal energy in the tradition of Streamline Moderne, a style of Art Deco heavily influenced by naval aesthetics.

In turn, the rectilinear yet asymmetric dimensions of floor-to-ceiling windows are distinctly contemporary, as are the punched perforations in the brick balusters at the balconies, which span the wedge tips at the narrow end and are stacked in a glass-railed array at a building rear. 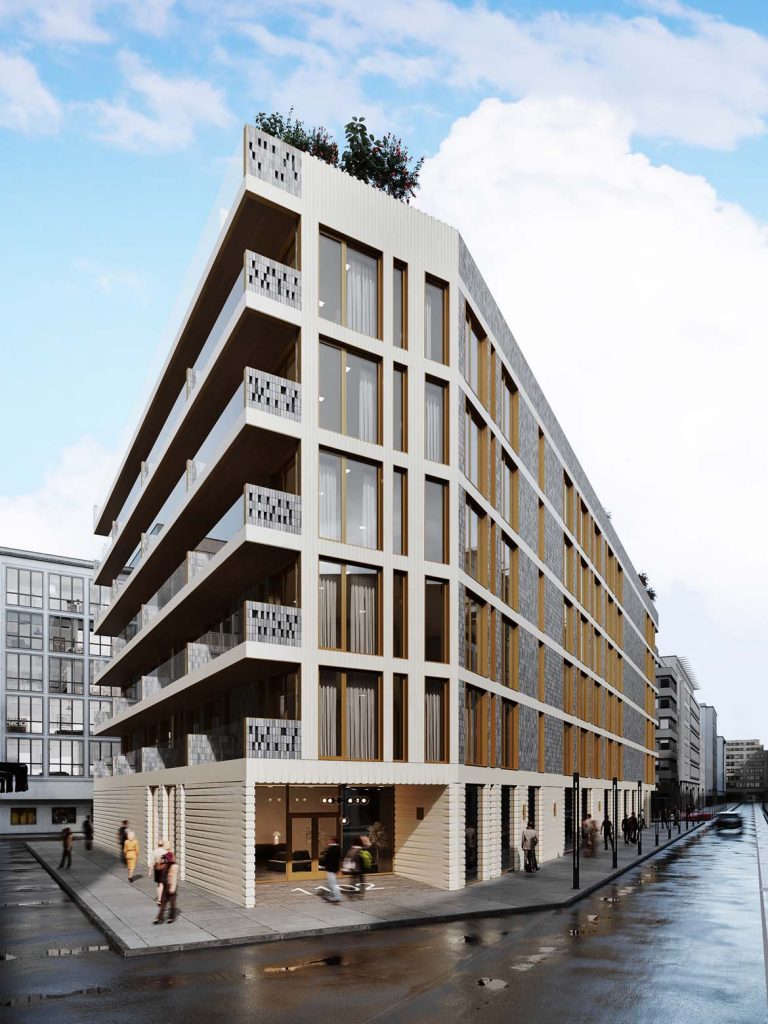 The proposal is the latest step in a long-term redevelopment wave that is sweeping the northern section of Northern Liberties, located around the bowtie-shaped intersection of North 2nd Street and Germantown Avenue. In the first half of the 20th century, the area was a hotbed of industry, yet by the turn of the millennium, most manufacturers had left and many of the surrounding blocks sat vacant, with acres of industrial properties razed to the ground.

Around 2009, The Piazza rose at 1101 North Second Street, across the street from where 1102 Germantown Avenue is now proposed. The complex features several mid-rise buildings, a public courtyard, a number of restaurants, and hundreds of apartments. The Piazza occupies the site of Schmidt’s Brewery, which operated from 1860 until 1987 and still ranks as the largest brewery in the city’s history. A multi-story shopping center followed soon after at 180 West Girard Avenue, anchored by the ACME Markets grocery store.

Over the next decade, residential development continued to transform the area, both in the form of prewar conversions and ground-up townhouse construction, yet even greater changes are still on the drawing boards for the near future. One such transformative project is North Liberty Triangle, a mid-rise, mixed-use complex with retail and 84 units in progress at 1102-42 North 2nd Street across the street from 1102 Germantown Avenue.

A block east of 1102 Germantown Avenue, Post Brothers is currently building Piazza Terminal, a multi-building complex that will include retail and 1,144 residential units and will extend Liberties Walk a block to the east. A block to the south, the same developer has recently proposed a 14-story, 280-unit high-rise at 1021 North Hancock Street.

The emerging district will become the social and retail anchor for the nascent high-density neighborhood, where many large apartment developments are planned along North American Street to the north and Delaware Avenue to the east.

No completion date has yet been announced for 1102 Germantown Avenue, though sometime in 2022 or 2023 is plausible.

Be the first to comment on "50-Unit Residential Building Proposed for 1102 Germantown Avenue in Northern Liberties, North Philadelphia"