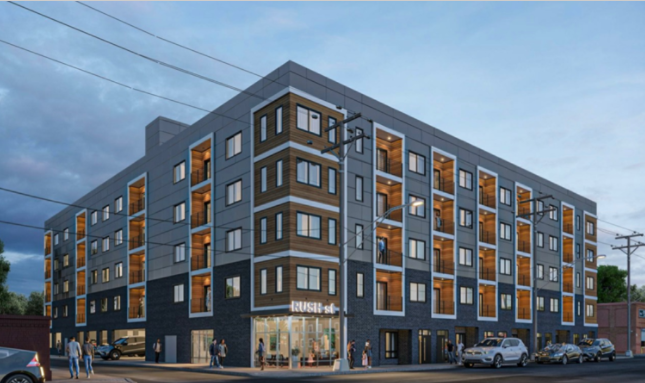 Permits have been issued for the construction of a five-story building at 2149-73 East Rush Street in Port Richmond, Kensington. Designed by Designblendz (with the firm’s Scott Woodruff listed as the architect), the building will feature 72 residential units as well as artist studios (likely ten in total, given that the building’s total “unit count” is listed at 82) and parking. The structure, also known under the shortened address of 2149 East Rush Street, will span a 19,878-square-foot footprint and offer 81,317 square feet of fully-sprinkled interior space. Permits list PBSDS Holdings LLC as the owner and Liberty Star Management Inc. as the contractor. Construction costs are specified at $10 million.

The surrounding neighborhood saw minimal development during the postwar period, although there has been an upswing of new projects, predominantly residential, in recent years. Part of the reason for this long-running lack of development is the neighborhood’s relative remoteness from the center of the city. Playing a role is also the comparative lack of large, development-ready properties, as the predominantly rowhouse neighborhood had fared rather well during the city’s postwar period of depopulation and has maintained most of its original prewar housing stock.

However, as development surges across the city, new projects are being completed and announced across Port Richmond. A key feature that allows for a significant increase in density is the Market-Frankford SEPTA line, which runs through the neighborhood (the Somerset Station sits within a ten-minute walk to the northwest from the proposal at 2149-73 East Rush Street).

A major complex consisting of densely-packed, three- and four-story townhouses was recently completed at the 2100 block of East Lehigh Avenue a few blocks to the southwest, on the opposite side of the rail tracks. Another development, consisting of four apartment buildings rising up to seven stories, is currently proposed at 2147 East Lehigh Avenue, next door to the townhouse complex.

Be the first to comment on "Permits Issued for 72-Unit Building at 2149-73 East Rush Street in Port Richmond, Kensington"