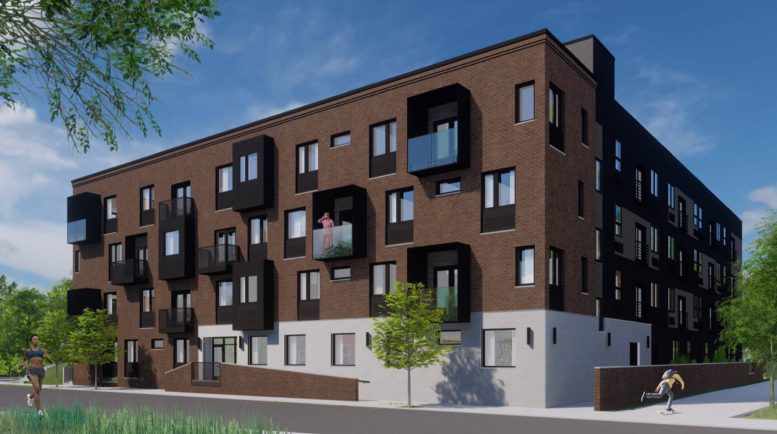 A zoning permit has been issued for the construction of a four-story, 67-unit residential building at 6327 Musgrave Street in Germantown, Northwest Philadelphia. The property is situated on the northeast side of the block between East Washington Lane and East Duval Street. Designed by KJO Architecture, the building will span 56,140 square feet and will feature elevator service, a partial basement, a courtyard, balconies, parking for 24 bicycles, and a green roof. 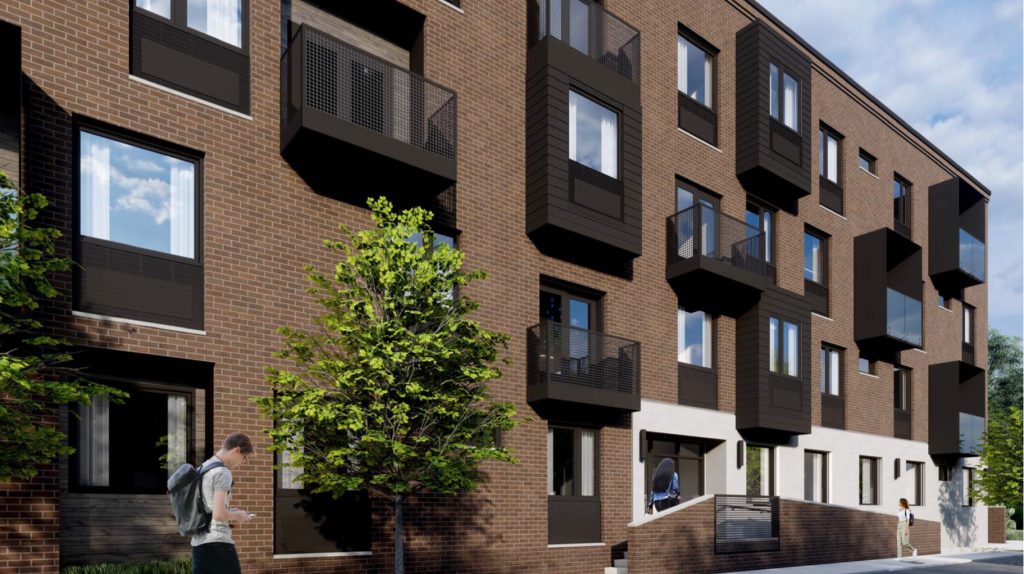 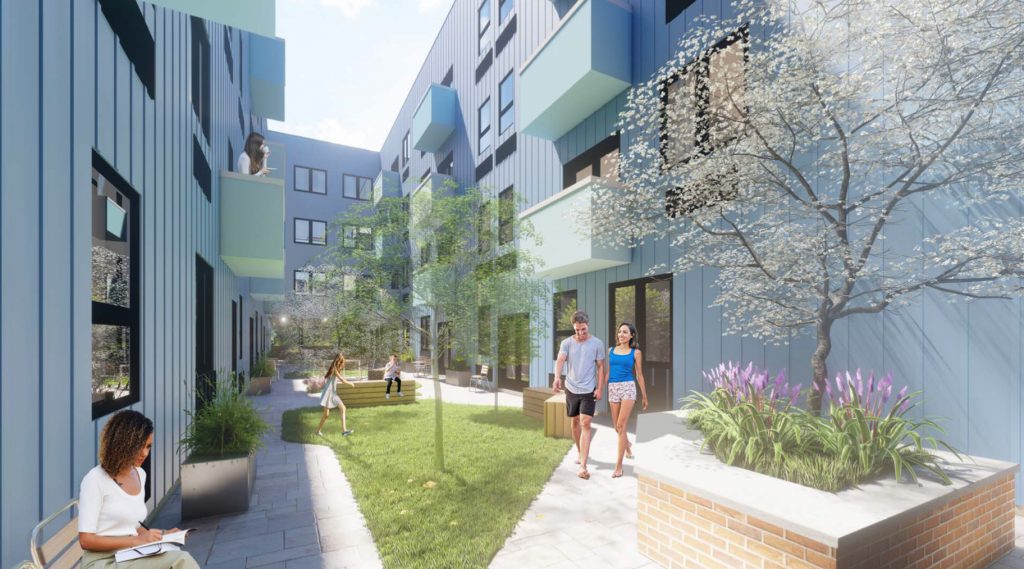 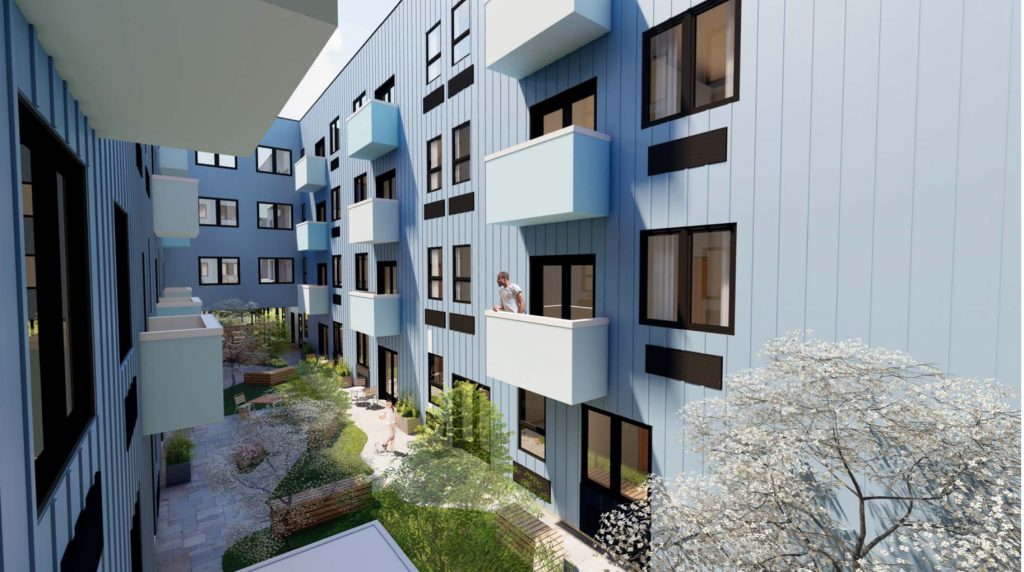 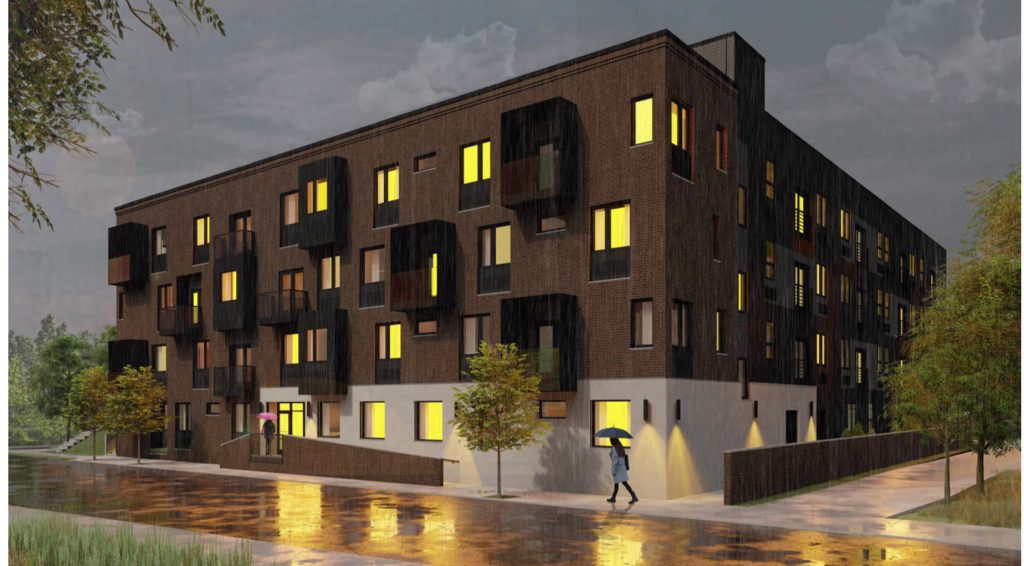 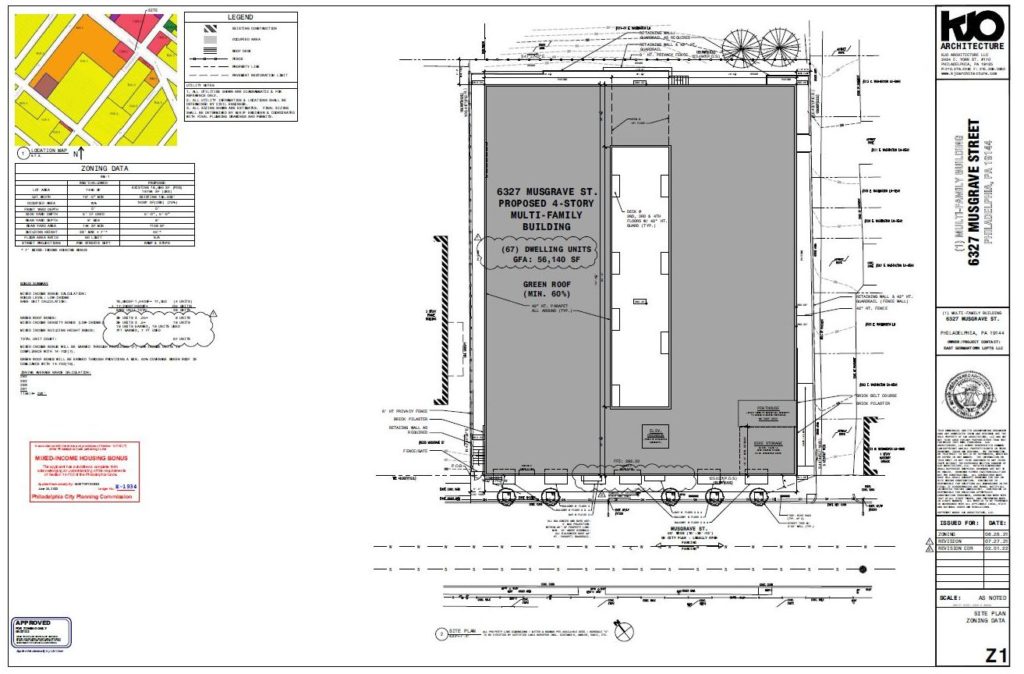 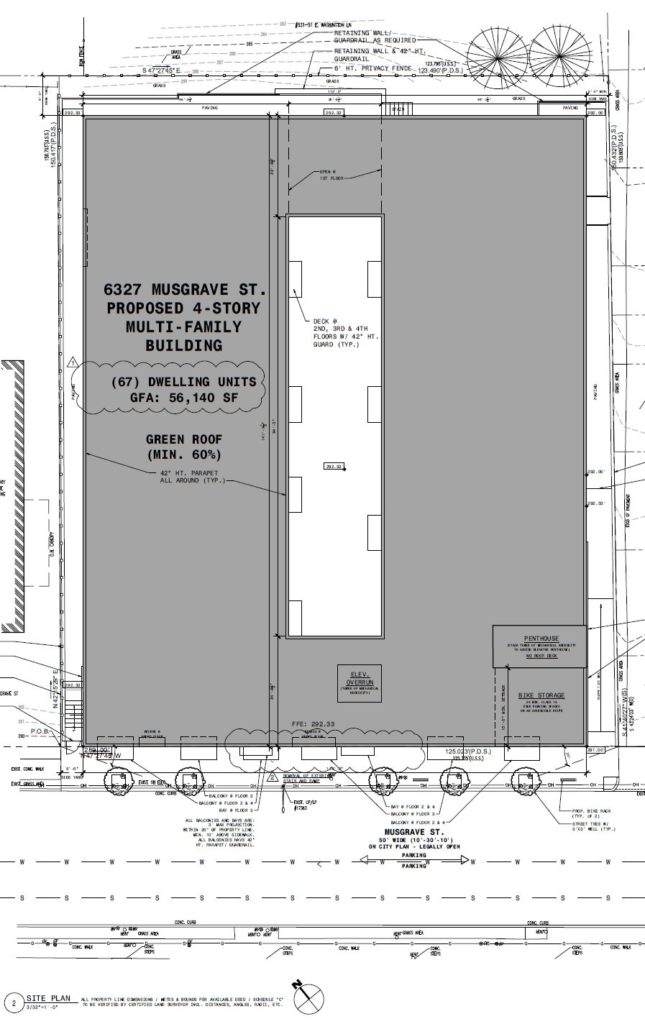 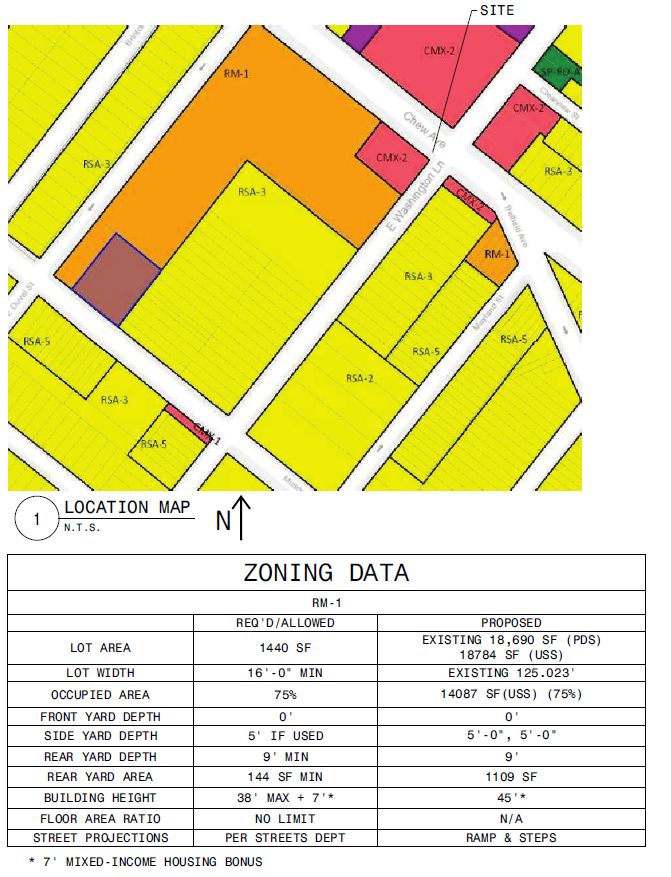 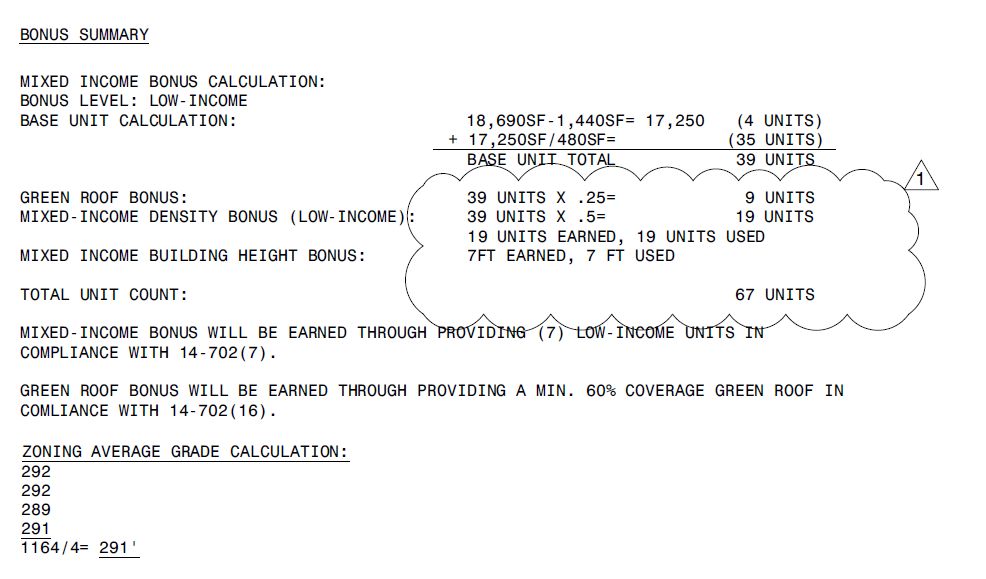 YIMBY last reported on the development in November 2021, when we shared project renderings that depicted a contemporary structure with staggered windows and dark gray cantilevers set onto a brown exterior. Diagrams that were published with the latest permit confirmed that the design appears to have remained essentially as previously seen, and revealed that the building will rise 45 feet to the main roof (and around 55 feet to the top of the bulkhead), which was reached by utilizing a seven-foot mixed-income height bonus. The green roof and inclusion of mixed-income have allowed the development team to increase apartment count by 19 from the original base count of 39.

The site was previously home to D Vaughns Auto Care, a car repair shop housed in a single-story masonry-clad facility adjacent to a sizable parking lot. The new development will be a much better fit for the large site, which is located in a predominantly residential neighborhood; however, the unusual garage is a rather interesting structure, so we dispatched our staff photographer to document it before its impending demise. As expected, we did not see any signs of demolition or construction (although the auto facility has already been shuttered), given how fresh the permits are. 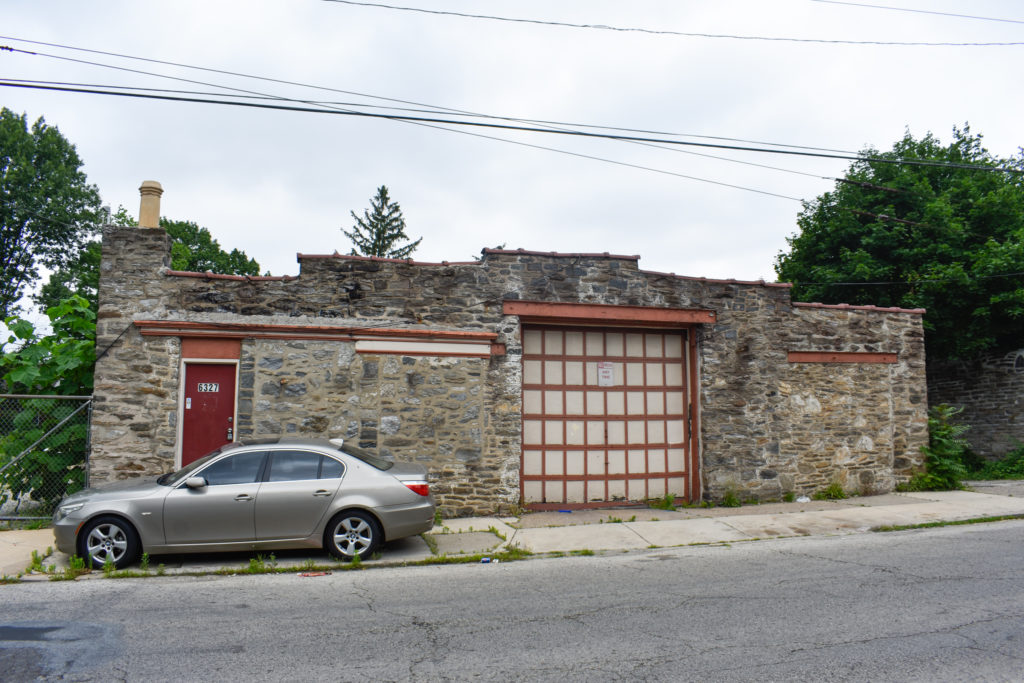 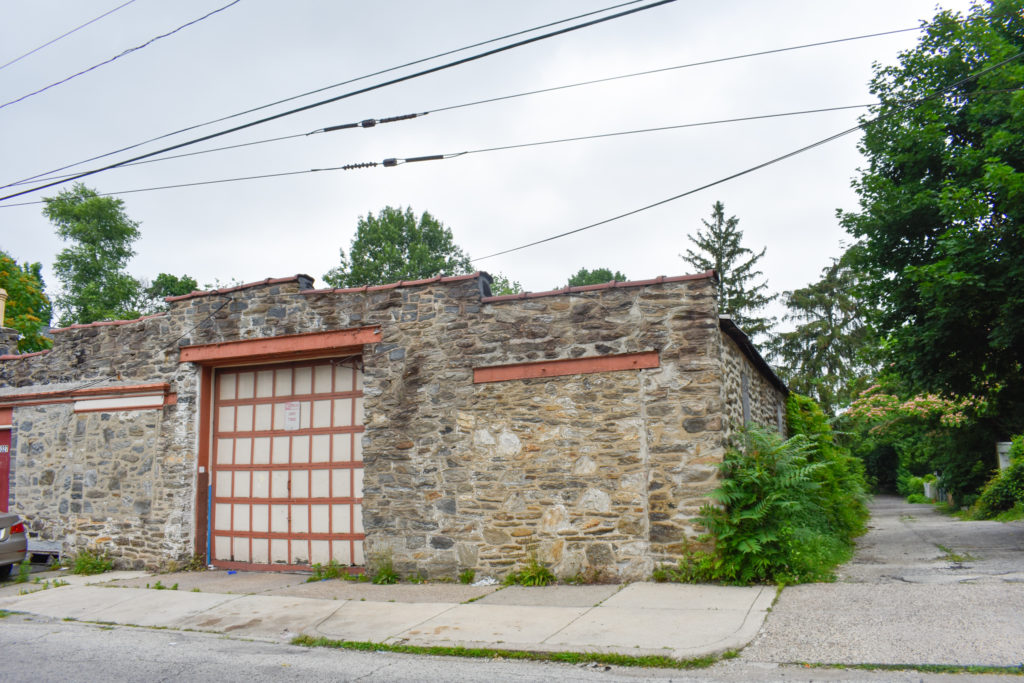 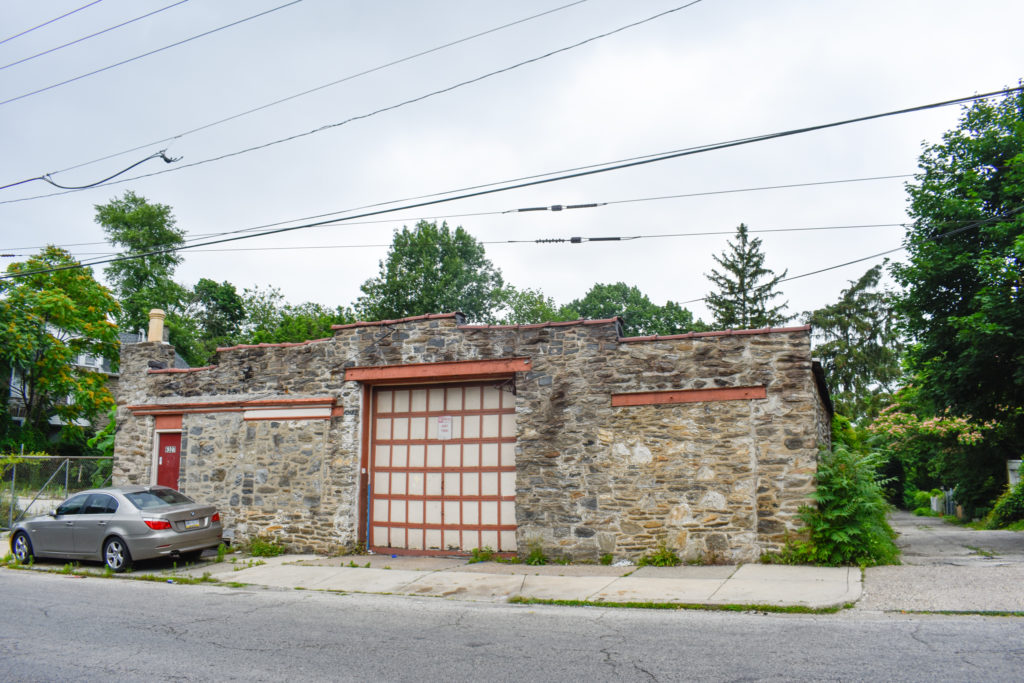 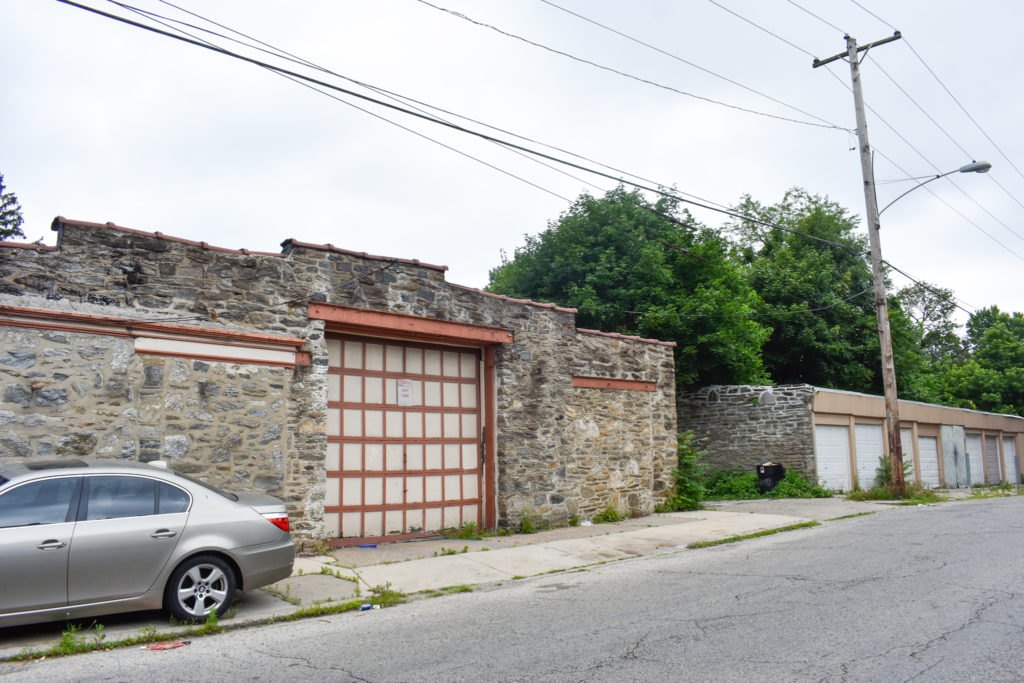 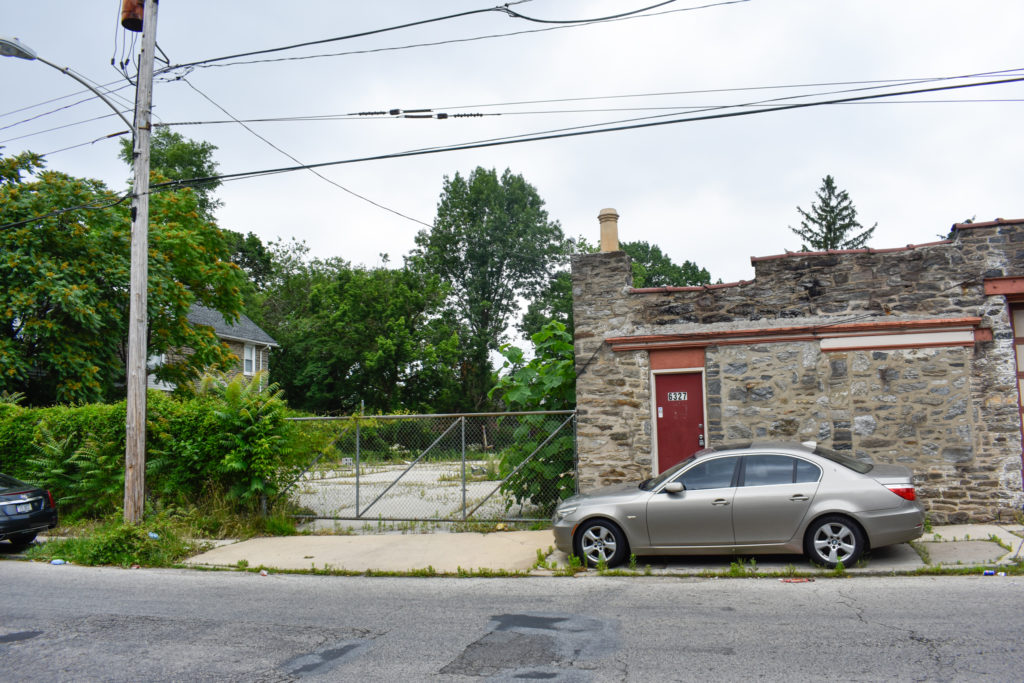 The property appears to have a rather interesting history. In a comment on our publication from last November, a YIMBY reader calling themselves “RC” shared the following about the location:

There is extensive photo documentation on the Library of Congress’ website of the interior of this building when it was debuting as Rowell’s in 1950 and it was a truly beautiful store. Rowell’s took over the lower floors of the taller portion of the building on the Chelten Avenue side, which existed previously as a bank which formerly had occupied it. Then, Rowell’s constructed the main retail section extending form that office tower out to Germantown Avenue. In so doing they did a fine job of integrating both deco/moderne and Colonial revival traits, linking stylistic touches of architecture of the time and the earlier character of Germantown, itself.

The upper floors that have the stone veneer did not before perhaps 15 years ago have any windows; rather, the stone facade was free of windows. There were also once aluminum script signs of the C.A. Rowell logo in cursive script, on the stone sections of the facade near the Germantown and Chelten corner of the building, which were illuminated from behind to cast a glow on the stone by night.

There is very little documentation out there about the history of Rowell’s itself; it had only one branch store, in the Moorestown Mall in New Jersey, and that closed, I believe, earlier than the Germantown flagship, which as noted in another comment, from 1974 to 1976 was run by a respected investor with a background in law enforcement and men’s haberdashery who did his best to keep the store viable before it was closed. After its use as Rowell’s the building a cut up into a “mini mall” with leasable spaces for small businesses, with a larger furniture store called Stern’s (not the old chain from the NY area) on the ground floor, and that lasted for a handful of years.

Although the feel of the quaint streetscape of Germantown borders on suburban at times, the relatively density of the multi-family building proposed at 6327 Musgrave Street is justified by its proximity to various urban amenities, namely transit, green space, and shopping. A grocery store sits on the opposite site of the block; furthermore, three parks (the Awbury Arboretum, Cliveden Park, and Mallery Playground) and two schools (the Roosevelt Elementary School and the Wissahickon Charter School, Awbury Campus) are located within a three-block radius, as is the Washington Lane regional rail station.