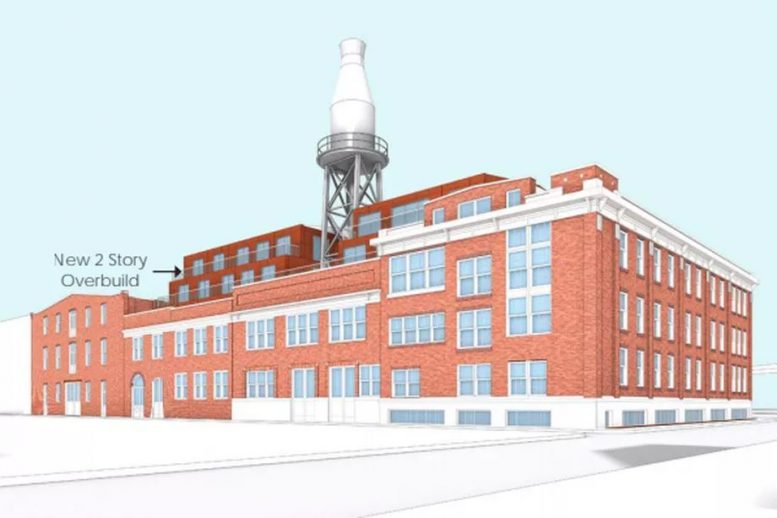 In recent years, Fishtown and greater Kensington have seen an increase in real estate development, which has continued in recent months with a string of permit filings, as tracked by Philly YIMBY. While the majority of the projects are ground-up construction, One of the neighborhood’s largest ongoing developments involves the renovation and repurposing of the Harbisons Dairy, a local landmark located at 2041-2055 Coral Street. SgRA Architects are in charge of the design for the conversion of the historically protected building into a residential complex with 55 apartments, including extending the structure by two stories and preserving and repainting the Harbisons Dairy milk bottle, a water tower that doubles as a local skyline icon.

The Harbisons Dairy Plant, which opened in 1895, consists of four attached structures, ranging from two to four stories in height. The facility was a point of pride for the Harbison family, completed 30 years after Robert Harbison, an Irish immigrant, moved with his family from Gwynedd, Pennsylvania to Kensington, where he served milk to local households. By the 1940s, the business was selling its wares to ice cream manufacturers that included Baskin-Robbins.

In 1968, the Harbisons sold the facility to Southland Dairy. By the turn of the millennium, the massive structure sat shuttered, with only the water tower, shaped as a milk bottle, reminding of the dairy’s former glory.

One of the four structures was converted into loft space a few years ago. The remaining three buildings will be home to a residential complex with amenities such as a dog park and grooming station, bike storage, fitness center, coffee shop, roof deck, local art, and period-inspired common areas. Earlier this summer, the dilapidated water tower was repainted in its original white color with red lettering, restoring the Kensington skyline icon.

The redevelopment is part of an ongoing revival of northern Fishtown. Over the past ten years, extensive development thoroughly transformed the block to the east, where nine buildings recently announced at 2001-2013 Abigail Street will complete the block’s transition from mostly vacant to almost entirely built out.

3 Comments on "Conversion in Progress at the Harbisons Dairy at 2041-2055 Coral Street in Fishtown, Kensington"