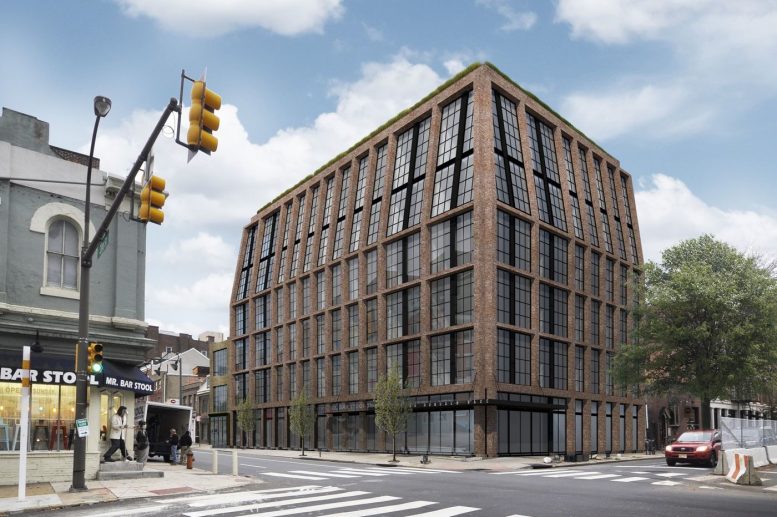 No progress has been made yet at 200 Race Street in the Old City section of Center City, where a six-story, 49-unit mixed-use building was proposed some time ago. YIMBY last reported on the development September 2020. Although we were excited by the attractive, high-density development designed by Ambit Architecture, in the year-plus span that has passed since, no permits have been filed for neither demolition nor new construction. As expected, our recent site visit also revealed no activity at the site, with the two single-story retail structures still standing, although both appear to be shuttered and vacant. 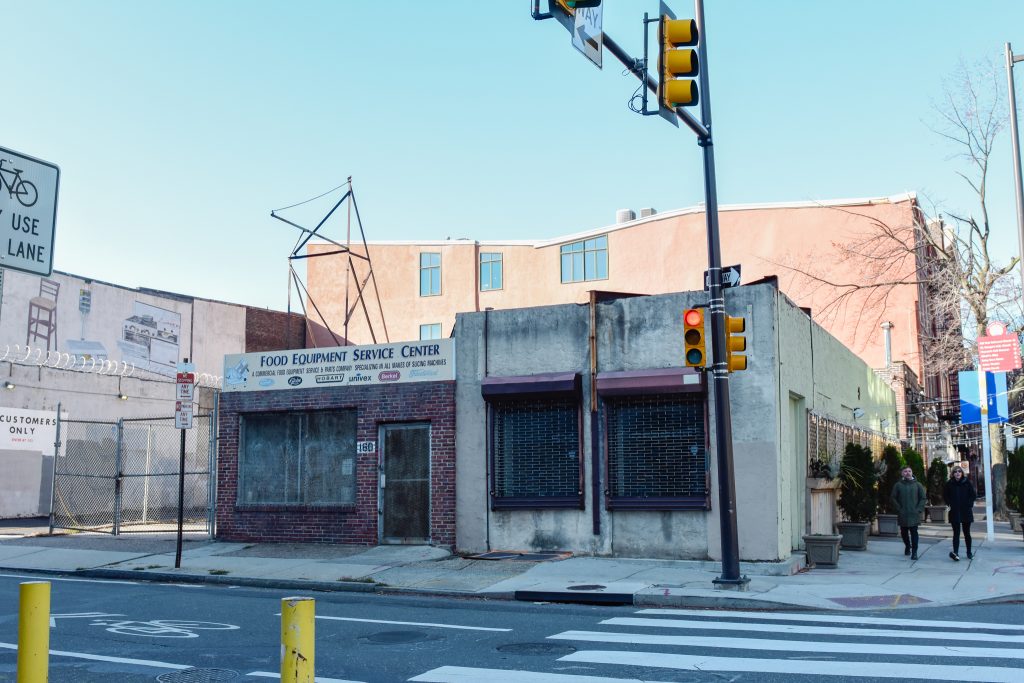 The proposal is slated for the southwest corner of Race and North 2nd streets, situated a short block to the south of the turquoise trestle of the Benjamin Franklin Bridge and a long block to the southwest of the bridge’s massive, stone-clad anchorage. The site is currently home to a pair of undistinguished, single-story retail structures with a parking lot at the side and the rear. The two formerly housed American Kitchen Machines in the corner building and the Food Equipment Service Center in the structure to the south. A similar structure formerly occupied by Swift Food Equipment stands near the southern end of the lot.

The featureless, water-stained buildings has a rather shabby appearance and does not contribute much, if anything, to Old City’s rarefied appeal. Their only redeeming feature being the rather attractive, if minimal, outdoor dining area recently added along Race Street for apparent use by the cafe situated in the adjacent building to the west, which is not part of the development. 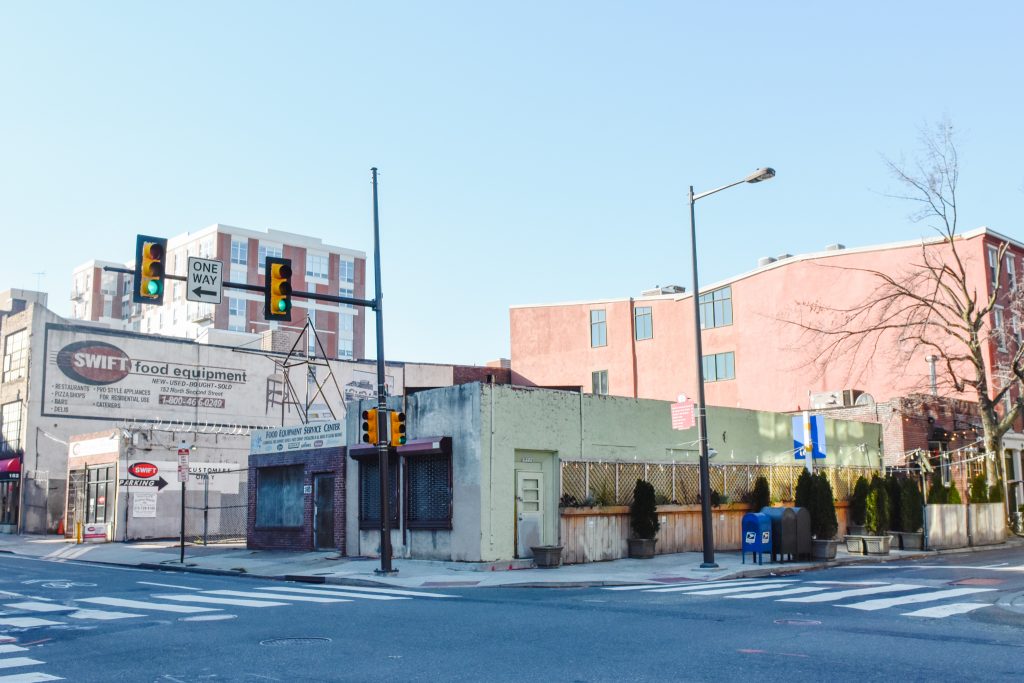 By contrast, Ambit’s proposal strikes a presence that is at once eye-catching and modern yet deferential to its historic context. The deep-set, brick-clad grid of floor-to-ceiling, loft-style windows resembles contemporary architecture as much as it does prewar factory lofts of the type that once dominated the part of the city to the north. Similarly, the steep slant at the top two stories is as much a Modernist gesture as a homage to the city’s angled mansard roofs, whether of the Colonial, Federal, or Second Empire (e.g. City Hall) variety. A trim of verdure along the parapet suggests a spacious green roof that would offer dramatic views of the skyline and the bridge.

Just as importantly, if not more so, the 6,000 square feet of retail proposed at the ground level would be a much finer fit for the dense, pedestrian-friendly neighborhood than the former equipment service providers and parking lots that currently span the lot. 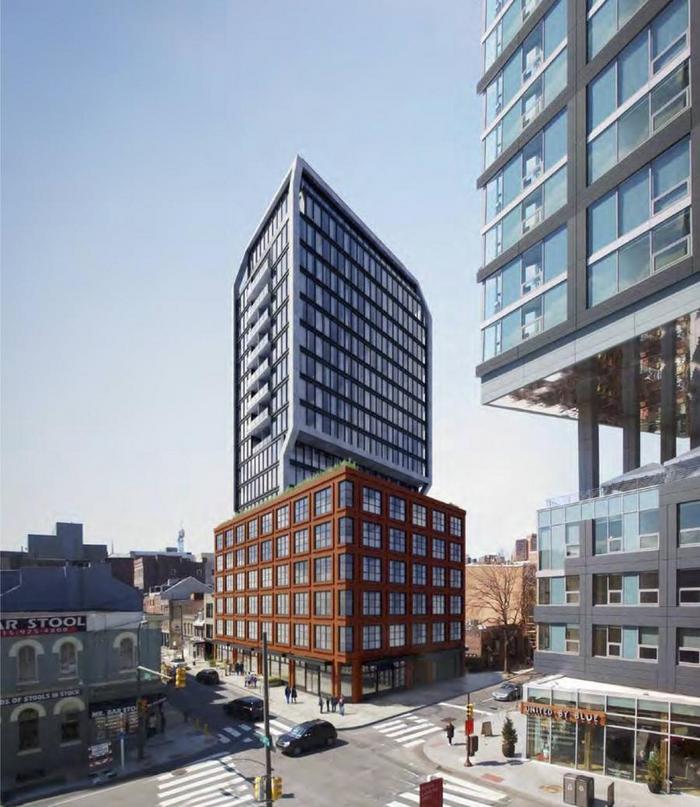 The original proposal for the site was even more ambitious. Instead of rising 65 feet, the current proposal’s height, the site was slated for a 230-foot-tall, 19-story tower that would have held 117 hotel rooms and 24 residential units. The lower section was crafted as a six-story loft-style building, not too dissimilar to the current proposal, topped with a slender glass-and-metal-clad tower that rose from the southern portion of the site.

The high-rise proposal was ostensibly shot down by the Philadelphia Historic Commission. While we can see the reasoning for the Commission’s opinion regarding this tall, modern-styled proposal, both height and the design were actually surprisingly contextual for the site, given that it sits across the street from Bridge on Race, a roughly 200-foot-tall, 19-story rental apartment building completed in 2017. The structure is notable for its all-glass exterior and dramatic notch at the midsection, where a large outdoor deck that is made apparent to pedestrians on the street via a unique mirrored ceiling. 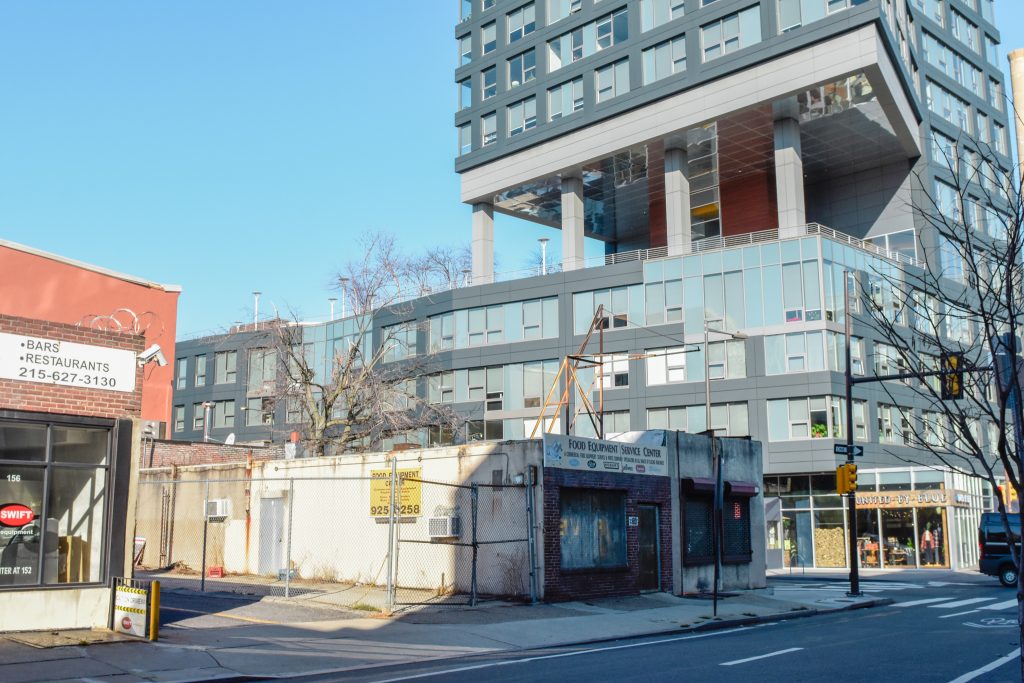 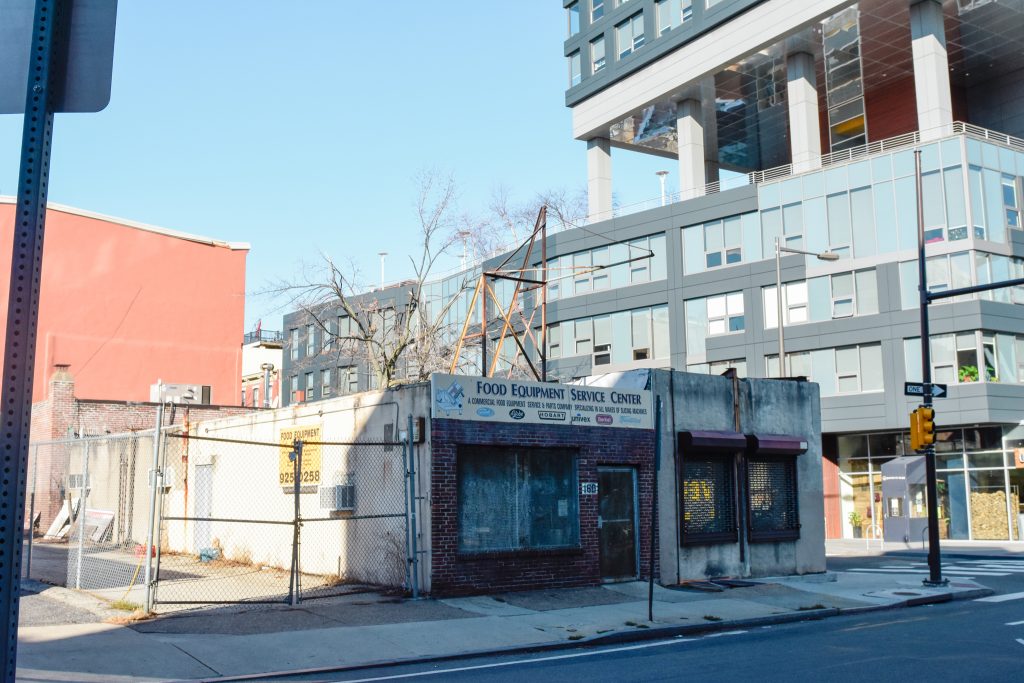 As such, we feel that the height and bulk of the previous proposal was indeed contextual for the site (although we also understand the counter-argument, as well, given its historic setting). However, perhaps the upper portion was rather too avant-garde for the location. We would not mind seeing another design iteration that reintroduces the formerly planned height and massing to the site, although redesigned with a more historic style and materials.