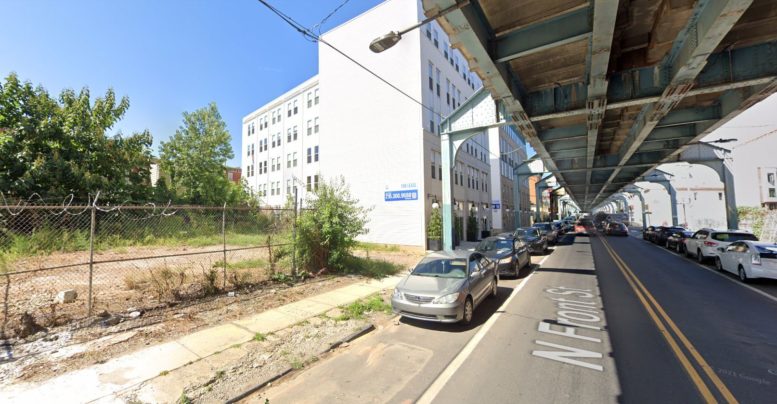 Permits have been issued for the construction of a four-story, eight-unit mixed-use building at 2034 North Front Street in Kensington. The structure will replace a vacant lot on the west side of the block between West Norris Street and Diamond Street, next to the Market-Frankford Line el. The building will rise from a 1,700-square-foot footprint and will span 8,086 square feet of interior space, which translates to an average of around 1,000 square feet per apartment. The development will feature 540 square feet of ground-level retail and a cellar. The roof deck promises to offer views of the skyline. Permits list the Estate of Anna Reinman as the owner, Christopher Carickhoff as the design professional, and V2 Properties Construction Management LLC as the contractor. Construction costs are listed at $1.38 million.

The site sits within close reach of both mass transit and green space. The route 3 bus runs along Front Street, and the Berks Street Station on the Market-Frankford Line is situated a block and a half to the south. The formal, leafy Norris Square Park sits two short blocks to the northwest.

The proposal is the latest addition to a rapidly developing section of the city. What was a stretch of vacant parcels, parking lots, and dilapidated has since become an urbane, retail-lined corridor. Two five-story mixed-use buildings were recently completed just to the north of the proposal site, at 2038 North Front Street and 2046 North Front Street. A short block to the north, the Harbisons Dairy facility, capped with its iconic “milk bottle” water tower, was recently renovated into a large residential development. Many more projects have been recently completed and are underway in the Kensington core to the east as well as in Norris Square to the west.