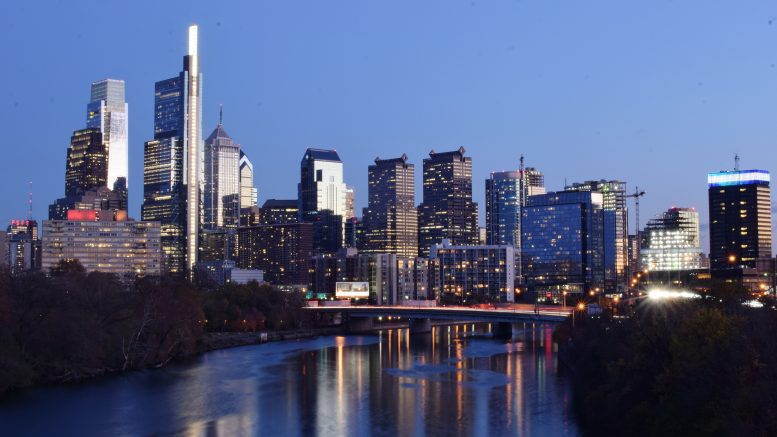 This year, Philadelphia is about to say “Yes In My Back Yard” to new development on an unprecedented scale. Over the course of last year, the Department of Licenses and Inspections issued a slew of permit approvals that may result in the construction of approximately 10,000 new rental units, roughly triple the number of the average total per typical year. Moreover, during the same period, a total of 90 proposed developments went before the Civic Design Review (CDR) board, which makes non-binding suggestions for projects that meet certain criteria depending on size and location. The number roughly doubles the average yearly volume and has set a record for CDR submission history. 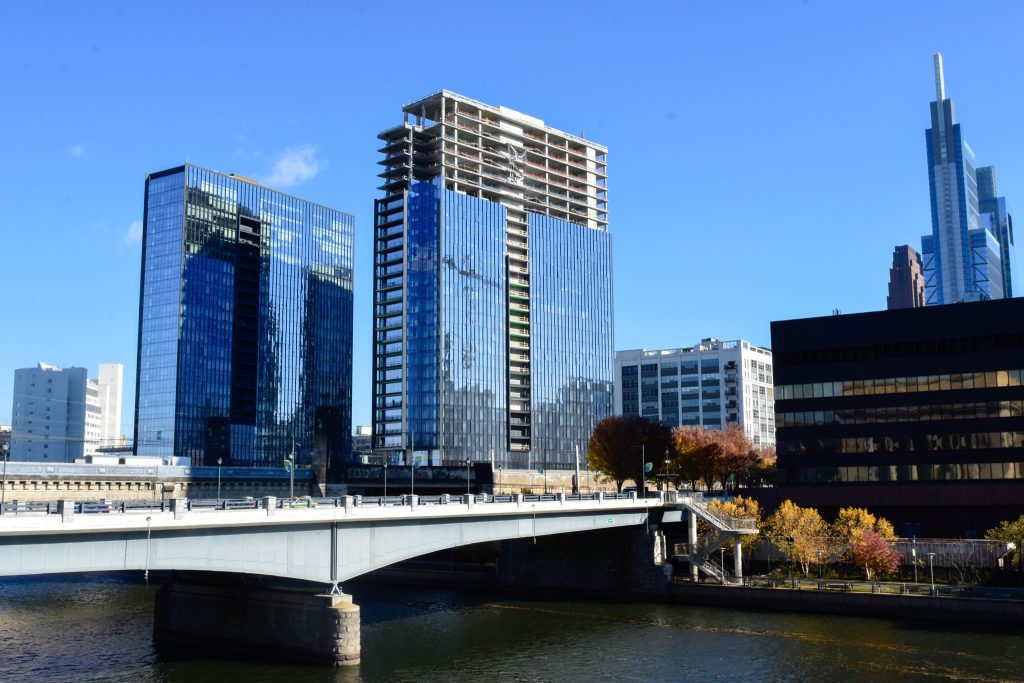 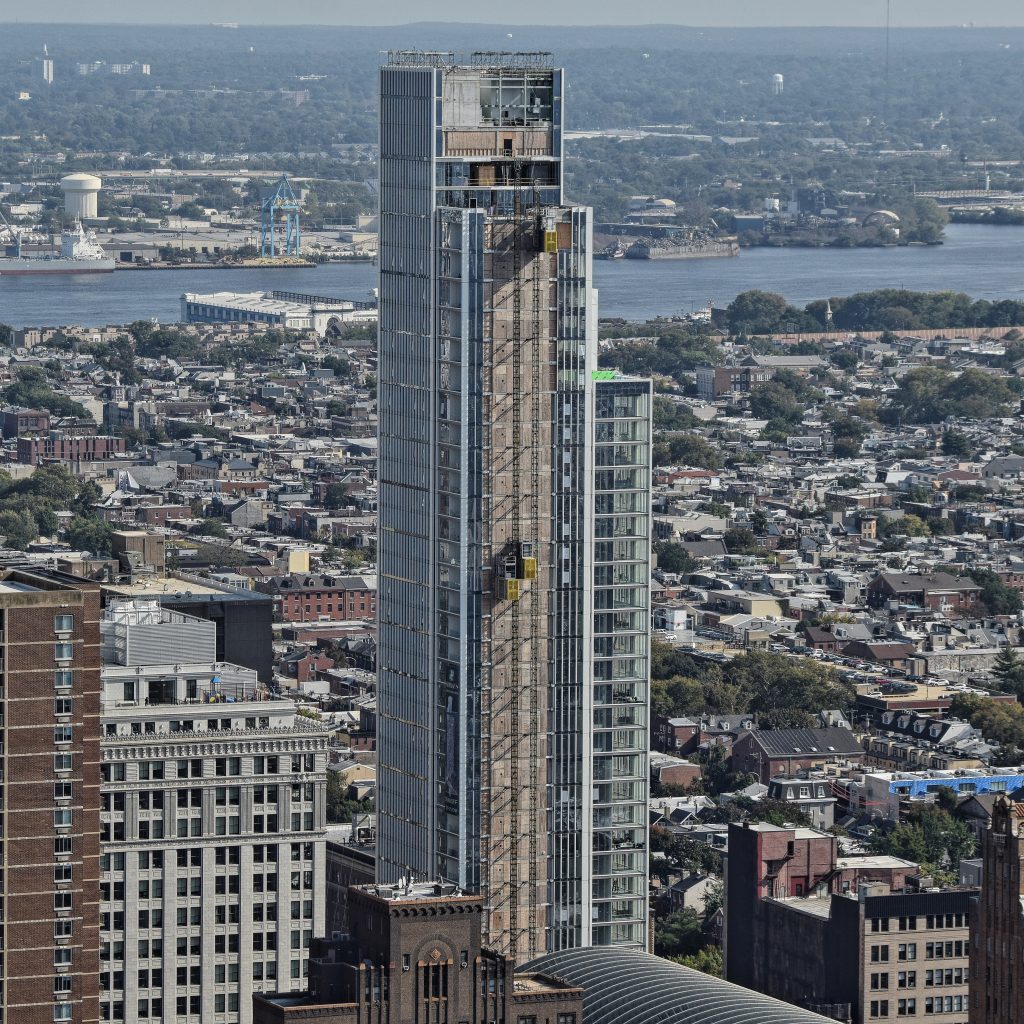 Arthaus from The Laurel Rittenhouse. Photo by Thomas Koloski

The volume of Civic Design Review submissions was significant enough to overwhelm the board to a point where it was forced to institute new guidelines. The deadline for submission of projects before the board has now been extended from three to four weeks prior to the hearing date, in order to give CDR members sufficient time to make their considerations.

In the meantime, the volume of new development has reached such a fever pitch that, in December, the city increased staffing at the historic preservation department in order to ensure that notable aged buildings do not needlessly meet the wrecking ball in the ongoing construction frenzy. 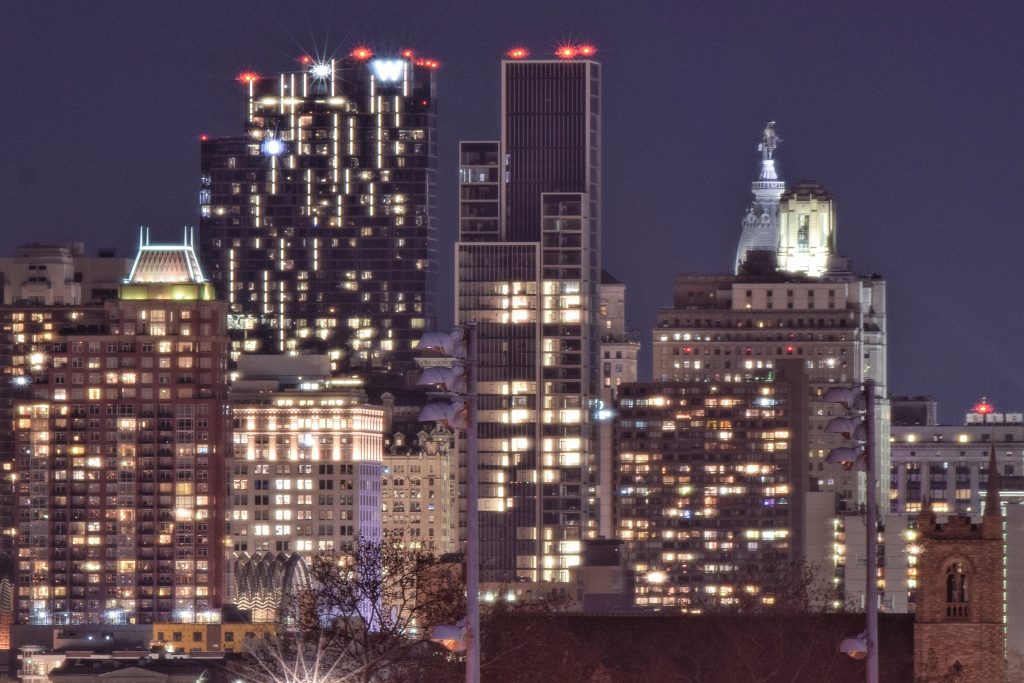 W/Element Hotel and Arthaus from the Live! Casino and Hotel. Photo by Thomas Koloski

Kevin Gillen, a senior research fellow with the Lindy Institute for Urban Innovation at Drexel University, suggests that the high volume stems from developers rushing to secure permits before the end of the year, which marks the expiration of the full ten-year tax abatement program, and ushers its replacement with a less developer-lenient scheme.

In the postwar period, much like many other cities in the Northeast, Philadelphia suffered from a precipitous population decline, which ushered not only a drought in construction, but also a wave of abandonment and demolitions that devastated entire neighborhoods. To encourage development, the city ran a long-standing program that offered residential property owners a 10-year tax abatement on the value of improvements stemming from new construction as well as renovation of existing properties.

By the turn of the century, Philadelphia had reversed its decades-long trend of population decline. The 2010 census registered resident growth of 0.6 percent, the first increase since 1950. By 2020, the city’s population grew by a whopping 5.1 percent, bringing the total 20-year increase of registered residents from 1,517,550 to 1,603,797. The construction scene has boomed accordingly, with new construction blossoming both in established central districts, such as Center City and University City, as well as all throughout the city, re-filling neighborhoods that have not heard the din of hammers and the buzz of drills in decades. 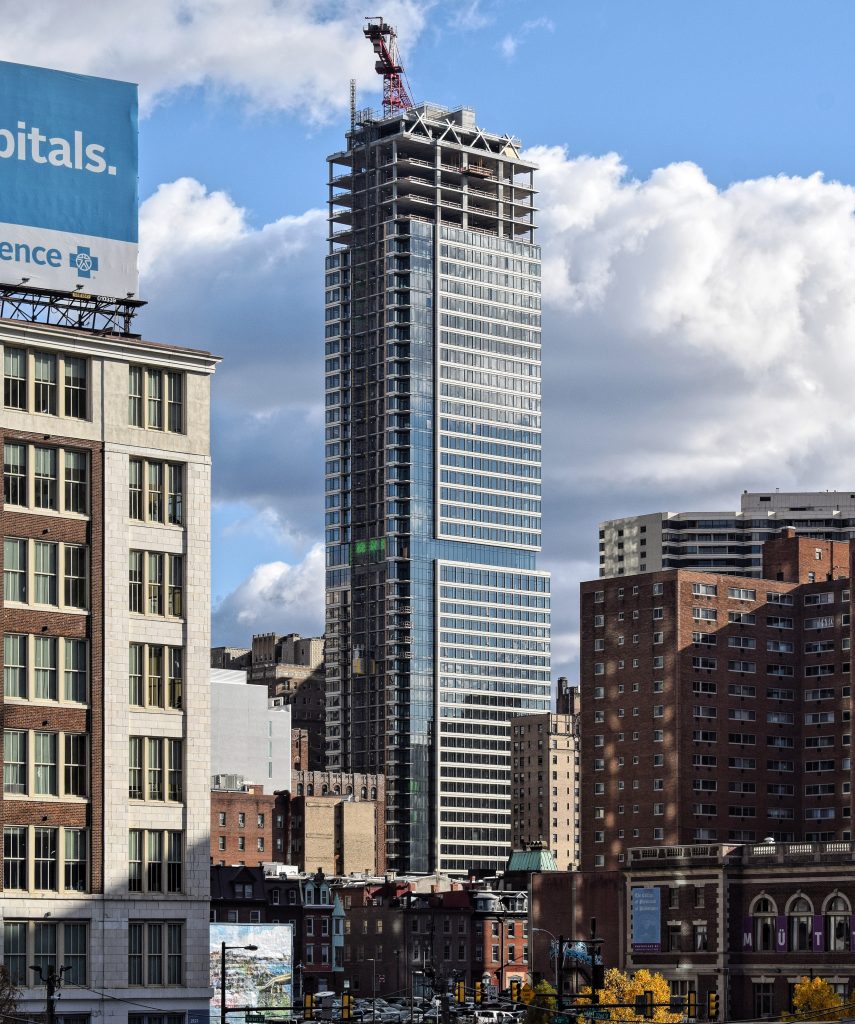 Just as the Federal Reserve increases interest rates in times of strong economy, the city government had evidently decided that the local development market is robust enough to get along without such generous incentives, where residential property owners could obtain a 100 percent tax abatement for ten years.

At the end of 2019, the City Council and Mayor Kenney introduced revisions where residential owners who applied after December 31, 2020, would only receive the full 100 percent tax abatement during the first year, with the abatement decreasing by ten percent each year, until the program was phased out entirely at the end of the tenth year.

The proposed changes, however, would have caused an untenable backlog of applications, further complicated by the ongoing employment sector issues. As the result, the deadline was pushed back to midnight on December 31, 2021, which had passed a week ago. 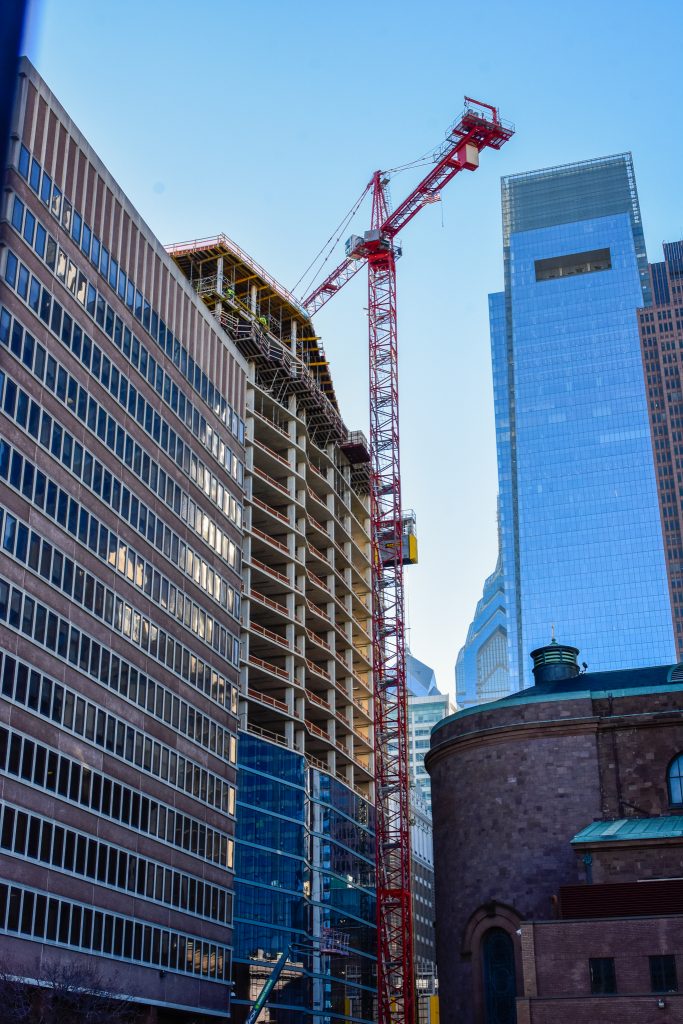 Gillen makes a logical assertion that developers went into a headlong rush to submit the still-lucrative permits by the end-of-year deadline, even if they intend to hold on to the permits for a short while (permits expire, after all) rather than start construction immediately. The data coming from city records seem to confirm this assessment. In the last weeks of the year, and in particular the last days of December, the city issued an overwhelming number of permits that would be surprising at any time, let alone during the holiday week between Christmas and New Year’s Day.

By contrast, construction permit activity has nearly ceased since that time. This unprecedented ebb and flow explains why, over the course of the past week, YIMBY has largely spent its efforts catching up with end-of-year permit issues rather than focusing on hot-off-the-presses 2022 releases.

Given the drastic shift in conditions, a sudden, yet likely short-lived, decline in construction permit activity is to be expected, just as stock markets are expected to dip as soon as the Fed announces a rate hike. However, both stock indexes and permit filings are expected to remain robust in the longer term because of favorable underlying conditions. 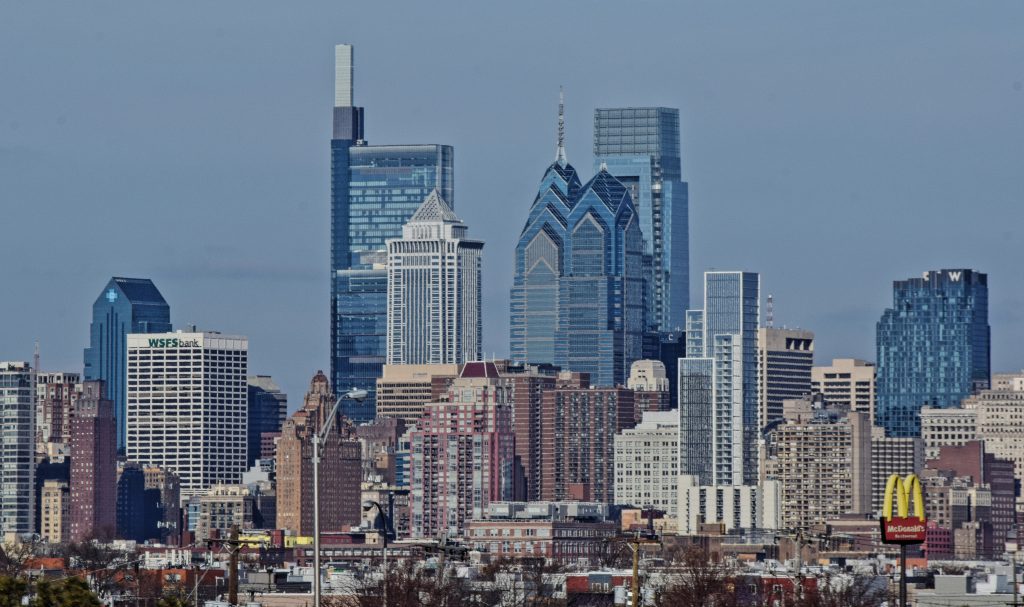 Significant as it may be, tax abatement reduction alone would not be sufficient to single-handedly justify the permit frenzy. After all, if the city was a lost cause in the eyes of investors, no amount of incentives would be able to generate significant construction activity. Instead, the permit volume is a testament of faith in Philadelphia’s bright future, where each filing represents potentially years of professional and personal time investment and millions of dollars in expenses for prospective builders.

Even in the face of adversity, such as ongoing national and international upheavals, unprecedented employment trend shifts, and the city’s disconcerting crime figures over the past year, Philadelphia continues to attract residents, business, and investors alike.

Urban development theorist and author Joel Garreau terms ongoing shifts in urban patterns as a “Santa-Fe-ing” of the nation and the world in general, where, thanks to advancing technology, physical proximity to employment is less necessary than ever in human history. As the result, the general population feels greater freedom to settle in places that offer perks that cannot be replaced by technology, such as personal interaction, a sense of community, live events and entertainment, transit access, and more. Garreau uses Santa Fe as a salient example of such a location. 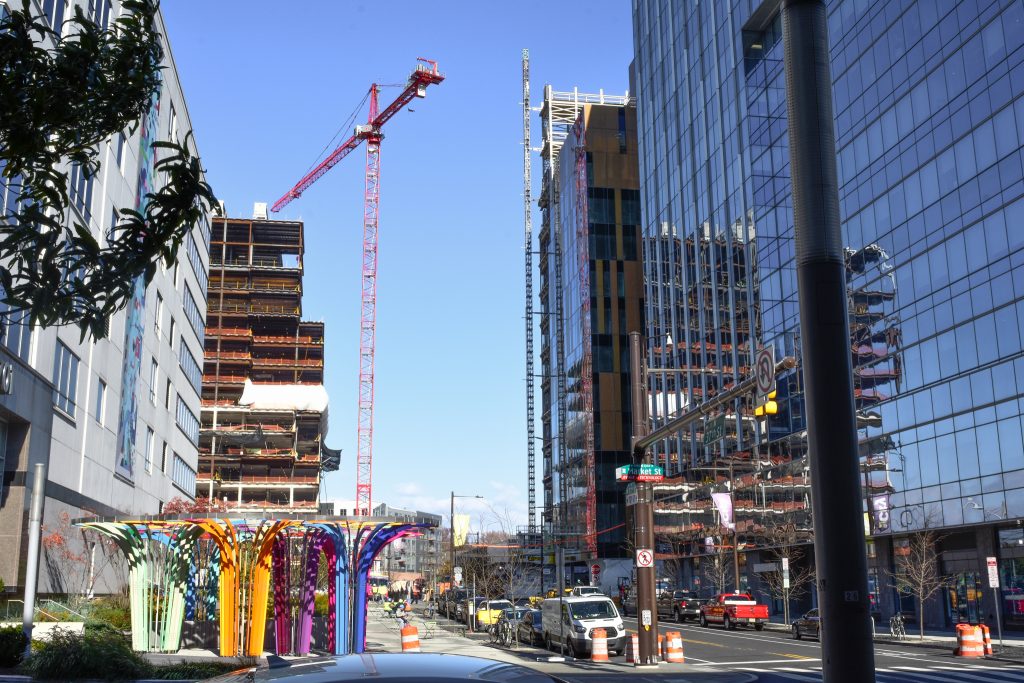 To some, this trend gives a chance to relocate to scenic, remote locations, allowing employed professionals to enjoy the great outdoors without sacrificing their careers. Others, however, see it as an opportunity to relocate from the suburbs to places of urban appeal and convenience, which Philadelphia continues to offer in spades even despite the city’s ongoing challenges. As such, we believe that we will see continued strength in the city’s development market, even with the partial reduction in tax incentives.

However, even the record-setting volume of construction projected for the coming year is barely enough to keep up with Philadelphia’s established growth. Between 2010 and 2020, the city added over 72,000 new residents. Even if, in the coming years, the city continues to add half again as many new rental units as it does in an average year (say, 5,000 per year instead of the average 3,000-4,000), the volume of new units coming onto the market would be barely enough just to keep up with the city’s natural growth, let alone to provide enough housing supply to notably lower the current cost of living.

Philadelphia still has ample room to accommodate further growth, yet the city has much work to do lest it become a victim of its own success. For instance, significant improvement must be made in education and medical services. Closer to YIMBY’s purview, the city must increase investment in mass transit, both through improvement and introduction of new service.

Welcome as it would be, construction of new subway lines is, unfortunately, all but unfeasible under current circumstances. Thankfully, significant yet much cheaper improvements may be achieved by capitalizing on existing assets, such as by re-opening the shuttered Ridge Avenue Station on the Broad Ridge Spur of the Broad Street Line in Callowhill, as well as by introducing new stations along centrally located regional rail lines, particularly in Lower North Philadelphia, as well as in West and Southwest Philly. 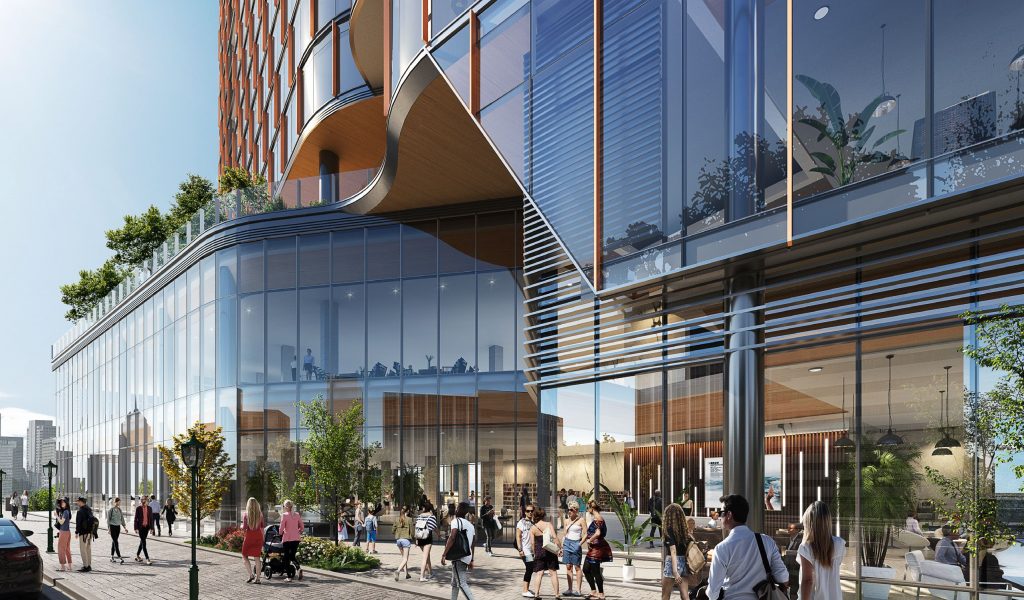 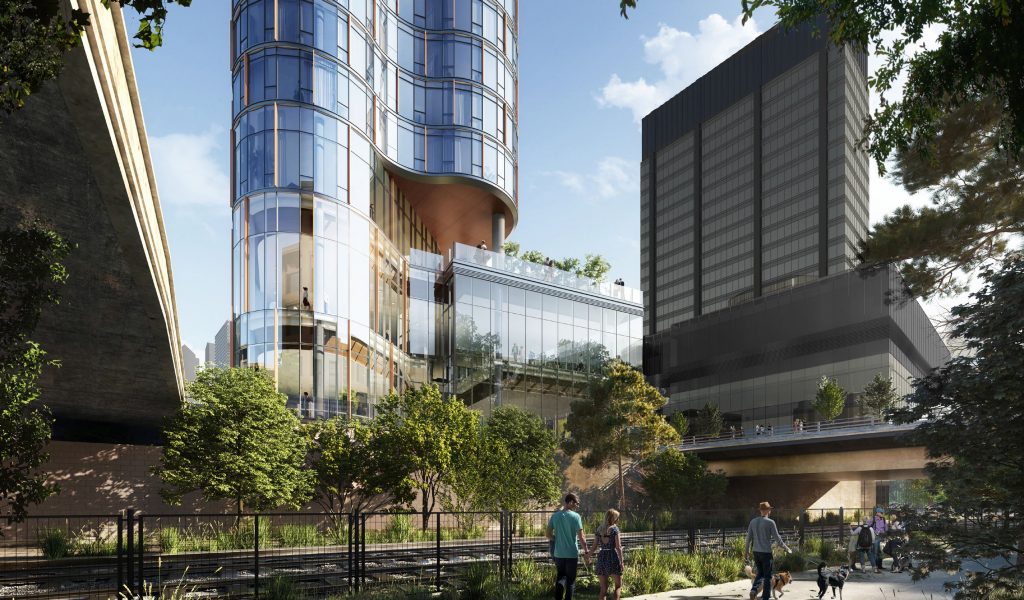 Similarly, the city must step up streetscape improvements and construction and rehabilitation of new and existing park space, public promenades, and bike lanes. Since we do not realistically expect massive improvements in neither transit nor the public realm from the notoriously cash-strapped municipal budget, we urge the city to increase existing incentives and introduce new ones for public-private partnerships, where developers are rewarded with density bonuses for creation, renovation, and expansion of new transit, park, and other public venues and services. In addition, the city ought to further revise its historic preservation incentives, giving greater rewards for projects that voluntarily preserve, rehabilitate, and/or incorporate notable buildings, particularly of prewar vintage, into new development.

In order for the equation to work, the city ought to relax its overly restrictive height limits in order to provide greater formal flexibility to builders. For instance, such flexibility may allow a developer to build up rather than out while creating a much-needed neighborhood playground on the leftover open space. A salient example of such development is poised to rise at 300 North Christopher Columbus Boulevard on the Delaware River waterfront, where the developer stacked the building’s program into a tower while reserving the rest of the space for a new park. In this exchange, the developer gains additional development rights while the neighborhood receives much-needed green space. 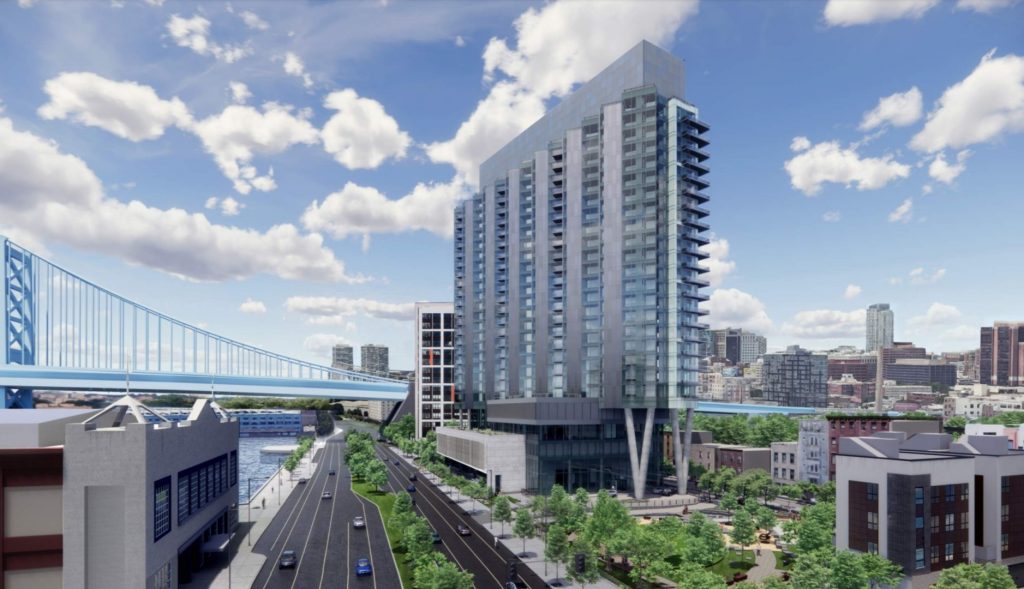 Additional incentives and development bonuses ought to be introduced for mixed-use projects, particularly in centrally located districts, as such development increases street safety and vibrancy by providing round-the-clock pedestrian presence (for instance, residents are likely to return to a building in the evening, when its office portion would empty out). One of the most significant mixed-use proposals currently on the city’s drawing boards is Two Cathedral Square, a 470-foot-tall, 34-story commercial and residential tower planned at 227 North 18th Street in Logan Square, just to the north of the iconic Cathedral Basilica of Saints Peter and Paul. 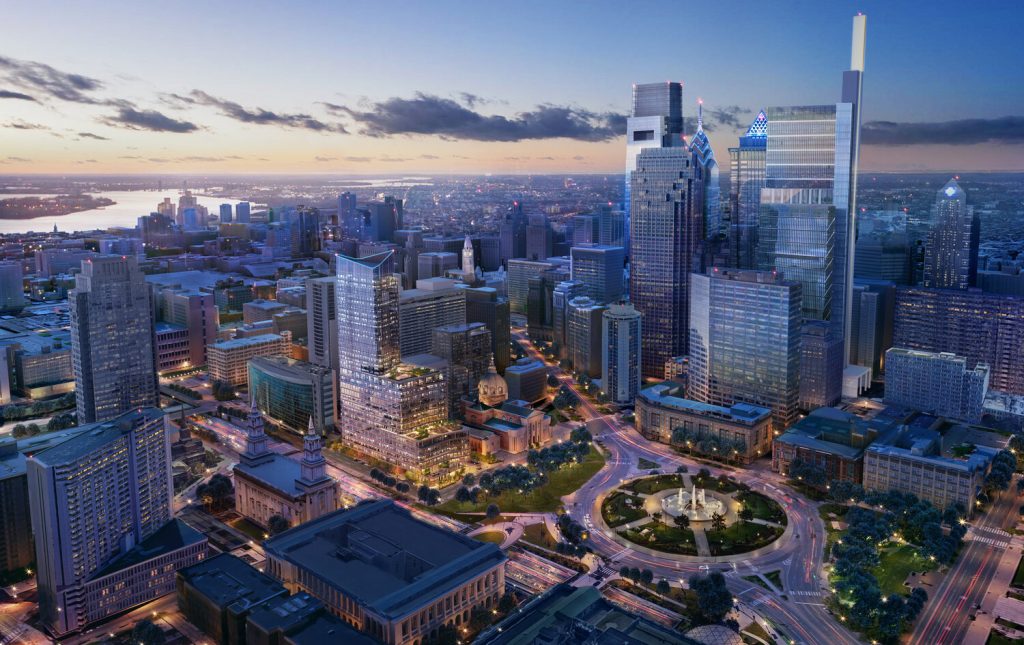 In spite of challenges, Philadelphia is clearly ready to surge back bigger, better, stronger, and more livable than ever before, though all parties involved ought to make a concerted, well-planned effort to make such a future come to fruition. For our part, Philly YIMBY looks forward to covering what is shaping up to be an exciting, record-setting year for new development. 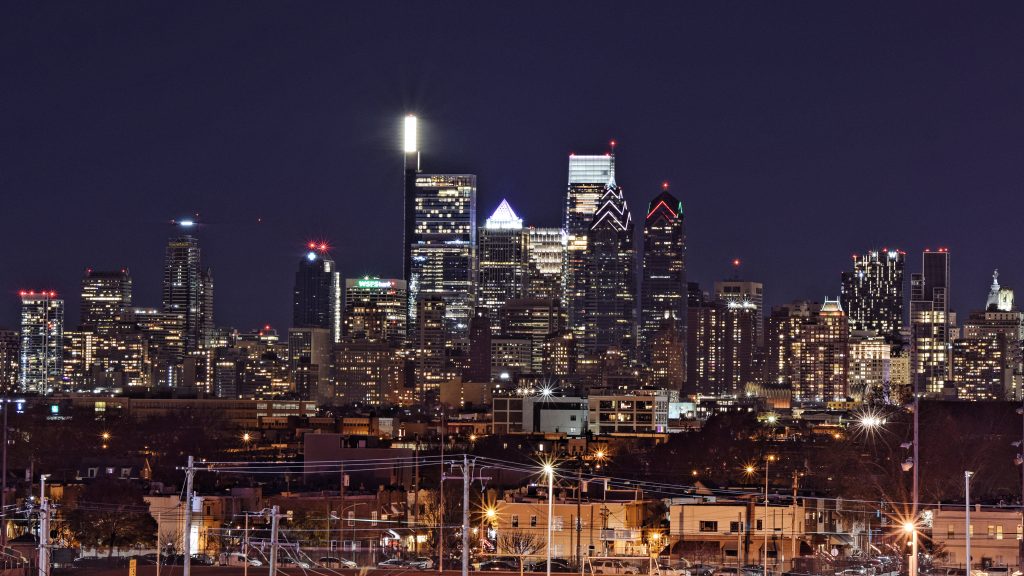 Philadelphia skyline from the Live! Casino and Hotel. Photo by Thomas Koloski