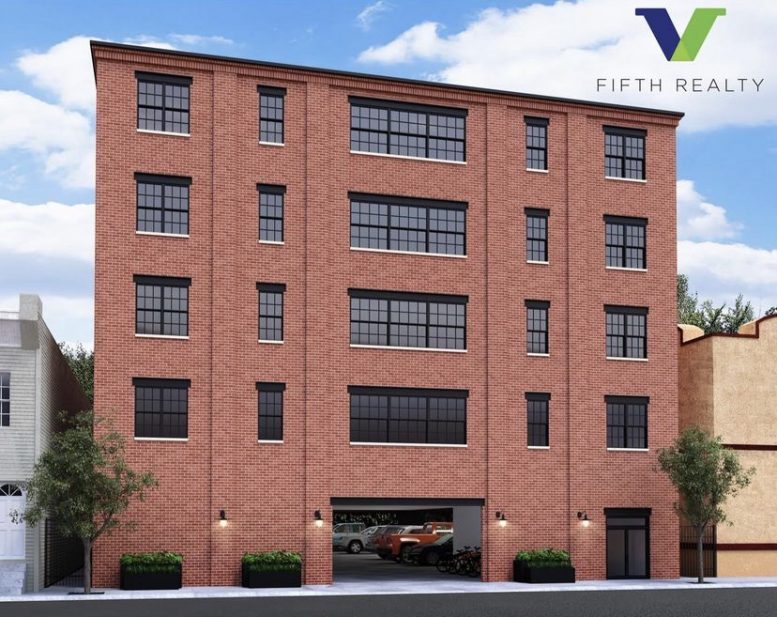 Philadelphia YIMBY’s recent site visit has revealed that construction work is nearly complete at a five-story, 28-unit apartment building underway at 3045-51 Richmond Street in Port Richmond, Kensington. Developed by Fifth Realty, the Neo-Industrial-styled structure rises on the southeast side of the block between Elkhart Street and East Clearfield Street. The substantially large structure spans 37,807 square feet of interior space, which will include 12 one-bedroom and 16 two-bedroom units. Features include full sprinkling and a ground-level garage for 22 cars. Permits list Lonny Rossman as the design professional and TBC LLC as the contractor. The construction cost is specified at $4.25 million. 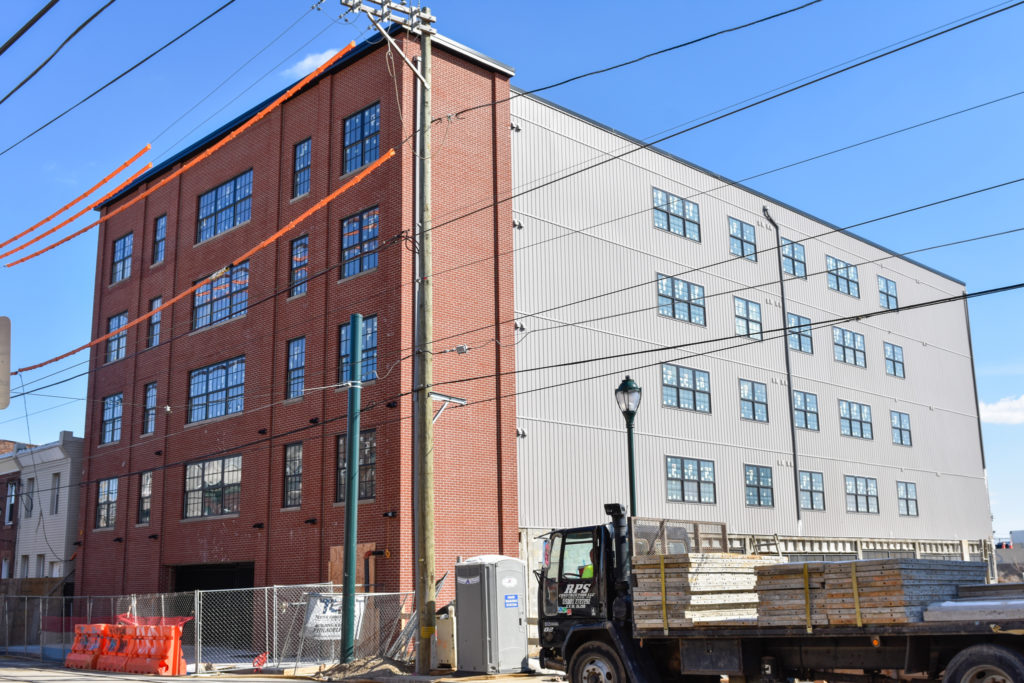 The structure replaces a marginally utilized property that housed a dilapidated, single-story, 1,885-square-foot commercial structure surrounded by an overgrown surface lot. Demolition permits were issued in December 2020, and foundation work was in progress as of January of last year. 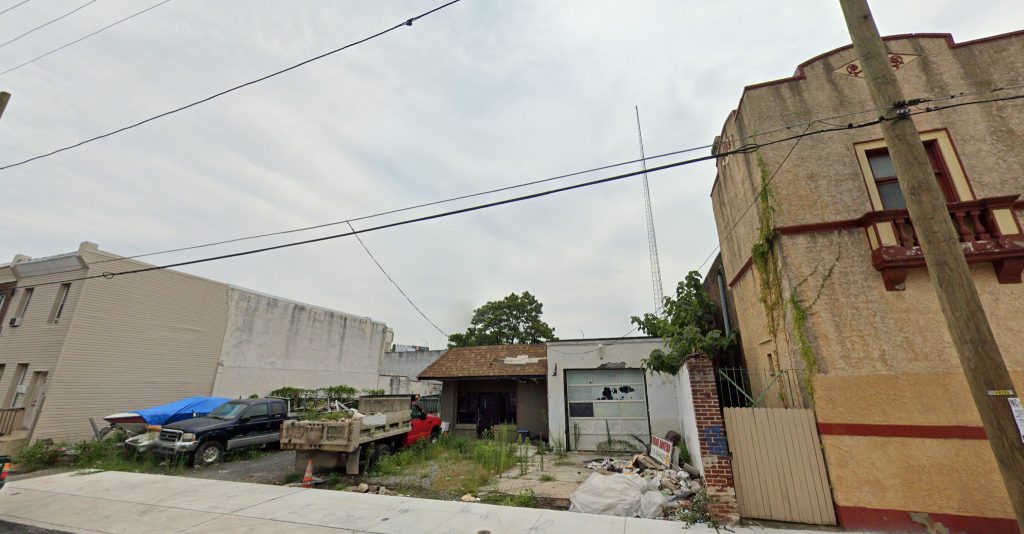 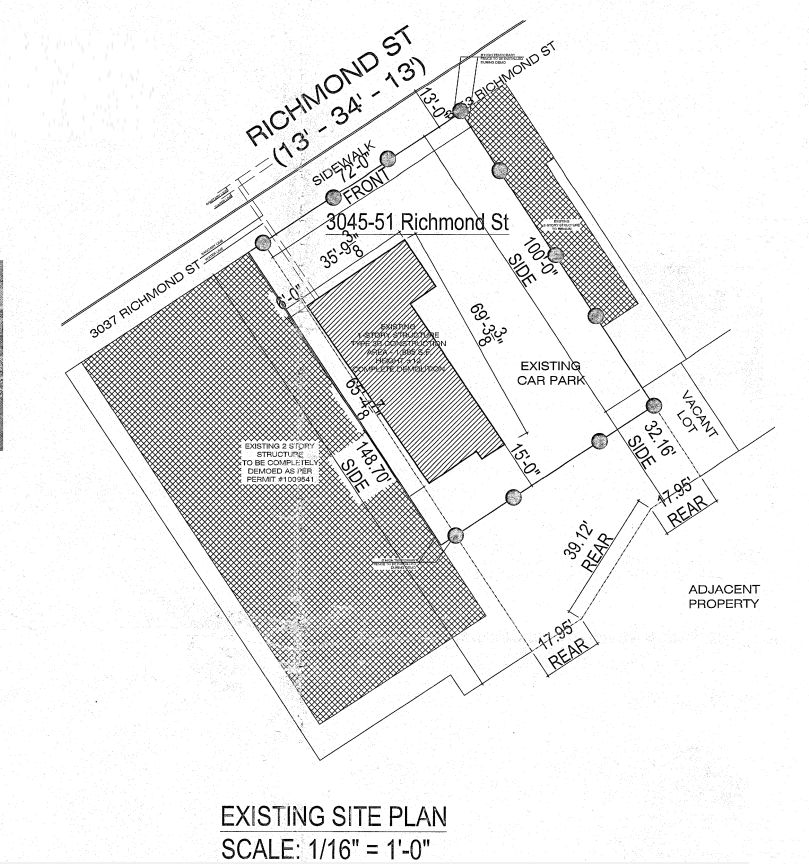 Construction work advanced rapidly over the coming months, and by the time we checked in at the site in August of last year, exterior work has already been substantially completed and interior fit-out was in full swing. By the time of our latest visit, the pace of work appears to have slowed down somewhat, though notable progress has been made since. At this time, the exterior is virtually complete, with the curtain wall and windows installed and the ground level largely finished.

With the building nearly complete, we can reasonably assess its impact on the surrounding streetscape. The building is among the largest in the surrounding area, which offers a pleasantly surprising density bonus at the neighborhood’s southern fringe, right next to the Interstate 95. Yet although the building towers over its neighbors, it does not appear out-of-place, thanks to the already dynamic and diverse composition of the block’s building stock.

A key reason why such a hulking structure fits within its two- to three-story prewar surroundings is its well-crafted, context-sensitive design. The street-facing facade follows the established architectural conventions at the block, such as a continuous streetwall, a red-brick facade, sash windows, off-white stone sills, and a cornice, an all-important traditional feature that is sadly missing from many modern buildings, even traditionally-styled ones. Projecting brick piers add much-needed texture to what would otherwise be a flat facade. Paneled, black-trimmed windows and a matching black cornice evoke prewar factory lofts and pay homage to the neighborhood’s industrial legacy. 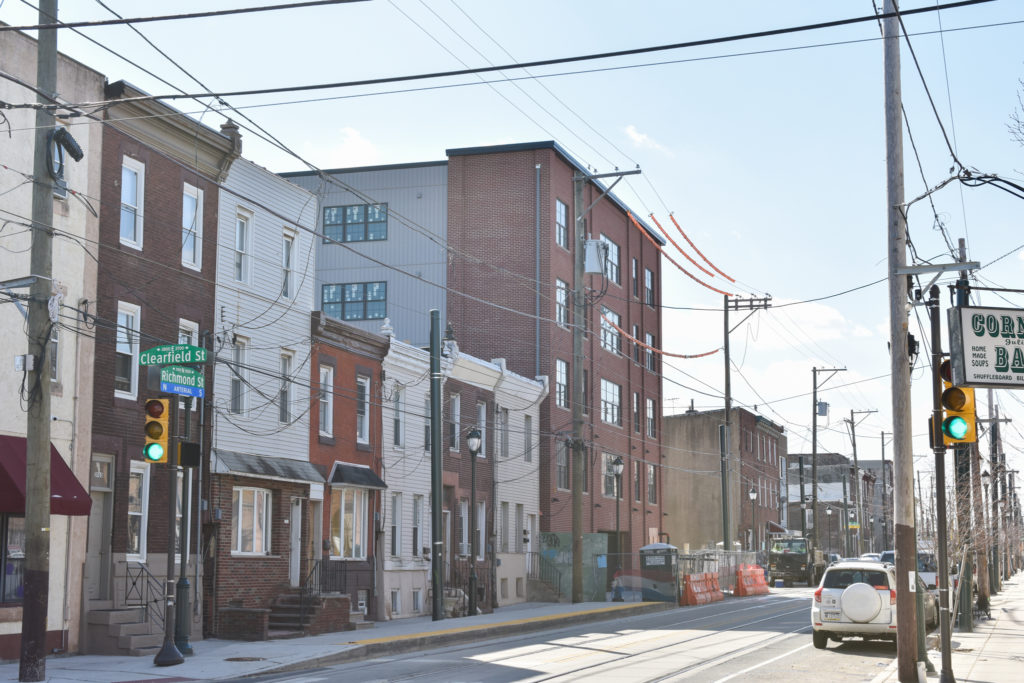 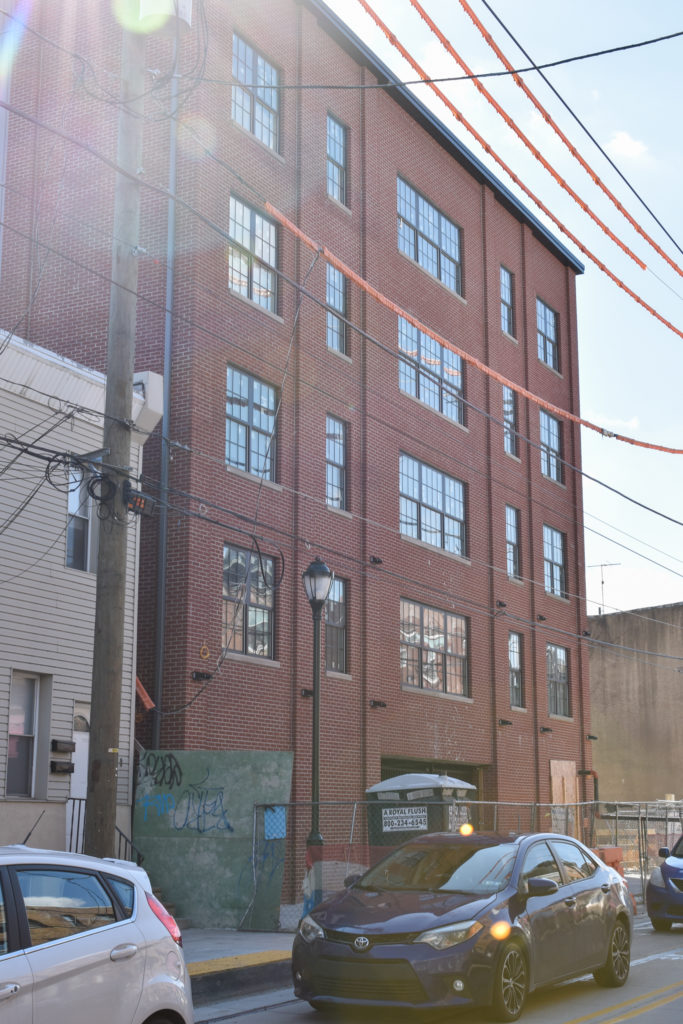 The brick facade wraps around the sides of the building around 15 feet deep into the lot walls and feature brick piers that match those at the street-facing exterior. This contextual feature further entrenches the structure as a cohesive part of the established architectural ensemble and diminishes the visual impact of plain side walls clad in vertical gray siding, which would otherwise be disruptive. Windows at the slightly set-back lot walls are another welcome feature, both to future residents as well as passersby, who would avoid the displeasure of passing by a massive blank wall. 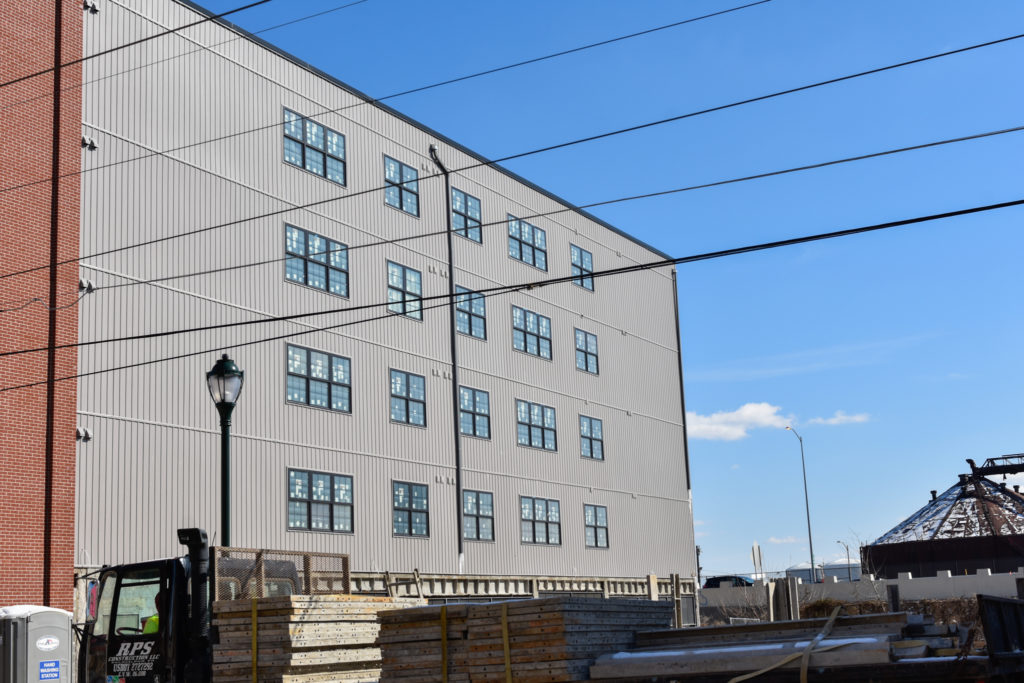 The only detrimental feature is the ground level treatment, which creates a less-than-ideal street presence with its windowless walls and large garage entry and sidewalk curb cut. While inclusion of ample parking is somewhat justified at the rather remote site, we do wish that the builders opted to include a retail component or street-facing residential amenities at the front end of the site, which would immensely improve the building’s relationship with the street. At this point, however, the best we can hope for is that the building base will be spruced up with planters, as the renderings promise, and perhaps further enhanced with murals above. 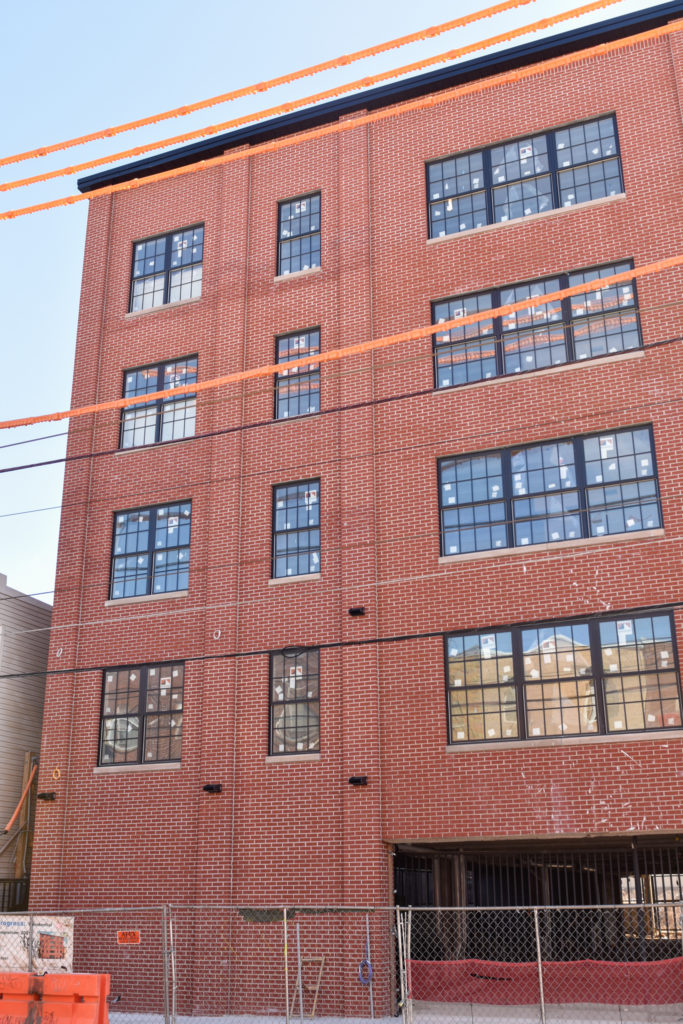 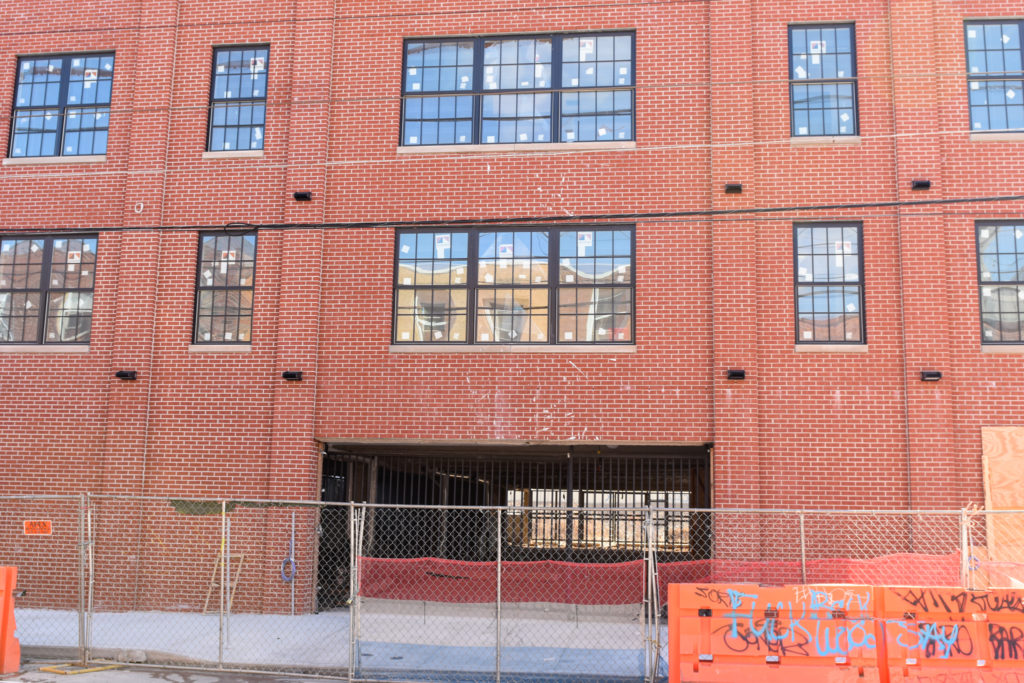 Aside from the unfortunate ground level treatment, we are impressed with the building’s stately, site-sensitive architecture and are excited about its addition of housing stock to a neighborhood where we would love to see further growth in the future.