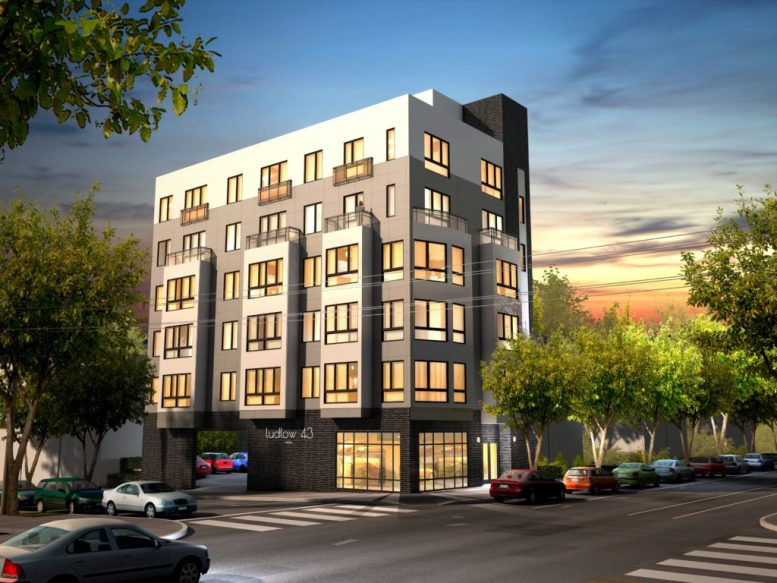 Exterior work is nearing the finish line on Ludlow 43, a 76-foot-tall, six-story residential building at 12-14 South 43rd Street in Spruce Hill, West Philadelphia. The structure will feature 18 apartments, with eight one-bedroom, five two-bedroom, three three-bedroom, and two four-bedroom units. The building will also feature five parking spaces, a fitness center, and a roof deck. Some upper floor units will be equipped with balconies.

The developer purchased the 3,877-square-foot lot at the northwest corner of South 43rd street and Ludlow Street over two years ago. The three-story rowhouse at the corner was demolished some time between late 2018 and mid 2019. Today, the structure’s exterior is mostly assembled, with work remaining on the ground floor and façade panel installation on the floors above.

The design is reflective of a common vernacular emerging on many rowhouses and low-rise apartment buildings recently built around the city. Ludlow 43 shares common design elements such as a façade of dark brick and gray panels and protruding rectangular window bays, though they’re applied on a greater scale in this project.

The building rises prominently over the surrounding area, so its upper floors and roof deck will feature sweeping skyline views of University City to the east and Center City beyond, at least until the large vacant site catty-corner to the project is eventually developed. Such development is likely as the site sits within close proximity to University City and about a 15-minute walk to both University of Pennsylvania and Drexel University, with Penn Medicine and the Children’s Hospital of Philadelphia located slightly further to the southeast.

In recent years, University City has witnessed a development boom that continues to this day, where developments such as Schuylkill Yards will alter the skyline in the near future. Development is spilling over into adjacent neighborhoods such as Spruce Hill.

Completion is expected in 2021.

Be the first to comment on "Exterior Work Nears Completion on Ludlow 43 at 12-14 South 43rd Street in Spruce Hill, West Philadelphia"