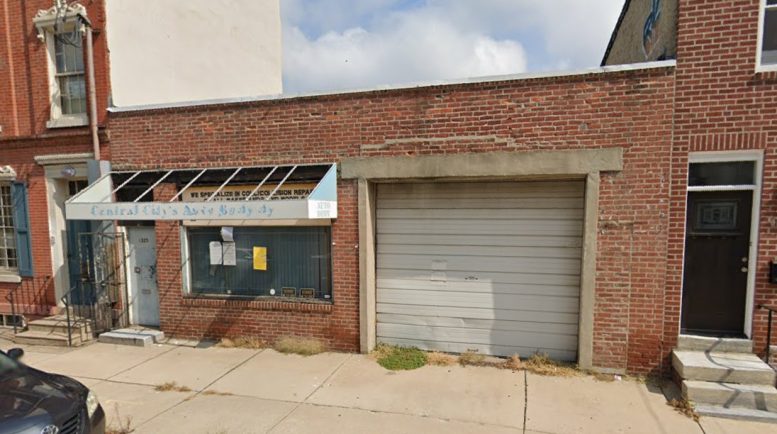 The brick-faced, astylar building fits reasonably well within its prewar context, yet holds negligible architectural value and its presence will not be missed on the streetscape. The façade has been visibly patched up over the years and shows signs of wear. The former auto body shop has persisted in a dilapidated condition for most of the past decade, with a torn canopy hanging as something of an eyesore on an otherwise charming residential block.

No new development has yet been announced for the site, but a proposal is likely to arrive in the near future given the site’s location. The property sits half a block east of a stretch of Broad Street that is seeing an influx of new development, most notably Mural West, a 363-foot-tall, 32-story mixed-use tower proposed a short block to the north at 523 North Broad Street. Broad and Noble is another high-rise proposed two short blocks to the south, and will stand 231 feet and 19 stories tall with office space, retail, and 368 residential units.

The area owes its development popularity to its proximity to Center City, mass transit (the Spring Garden station of the Broad Street SEPTA line sits one short block to the north), and an abundance of underdeveloped sites. The elevated Rail Park, which opened atop the long-abandoned Reading Viaduct in 2018, sits two short blocks to the southeast and adds further cachet to the area, with a “Rail Park District” already emerging in the vicinity.

Be the first to comment on "Demolition Permits Filed for 1325 Buttonwood Street in Callowhill, North Philadelphia"