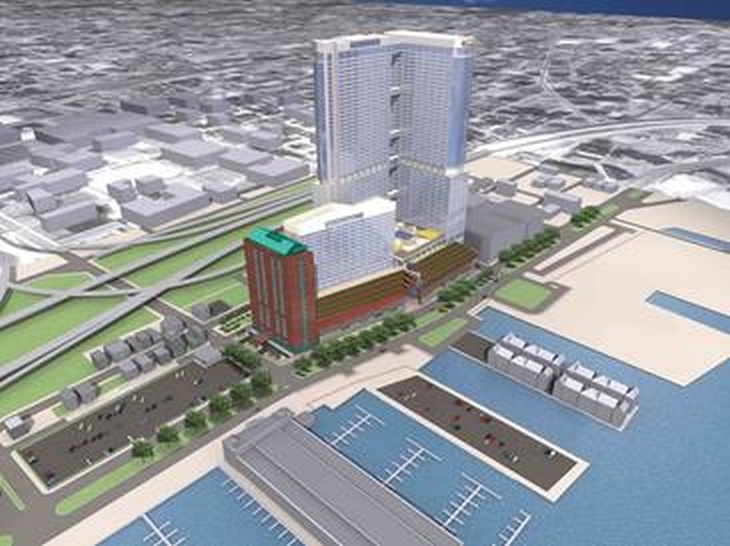 Yesterday Philly YIMBY published a feature story covering the 1,050-foot-tall Philadelphia World Trade Center supertall planned at 456 North Christopher Columbus Boulevard on the Delaware River waterfront in Northern Liberties in 1988. After the proposal fell through, developer Carl Marks Real Estate Group contracted Alesker & Dundon Architects to redesign the project as four shorter yet still impressive skyscrapers, which were to take up most of the 5.5-acre site. The development would now be known as World Trade Square, and later as Renaissance Plaza.

The two tallest towers, called Old City Harbor Two and Three, were situated at a 90-degree angle in respect to one another, connected by sky bridges, and planned for residential use. They were to be located at the north end of the site and scheduled to rise 636 feet high. The shorter towers would have held office space for The Greater Philadelphia World Trade Center and would have risen 435 feet and 324 feet tall.

The exterior mixture of the brick, stone, and glass would have been a welcome addition to the area. The residential towers would have featured a fantastic view of the skyline. The tower cluster would have been dramatically prominent when viewed from the north side of the Camden waterfront, dominating the surrounding low-rise neighborhood, just as they would have appeared to drivers traveling along the Benjamin Franklin Bridge, which is located several blocks to the south. The mirror-like residential towers would have greeted visitors entering the city via the bridge in a dramatic fashion.

The project was initially to be completed in 2010, but the plan was downscaled in 2013. The project has barely received any press coverage since that time.