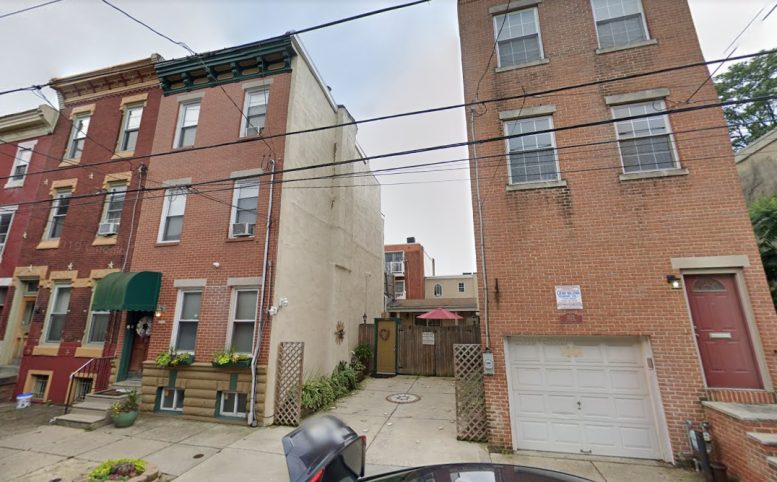 A permit has been issued for the construction of a three-story, four-unit residential building at 2118-20-Fitzwater-Street in Graduate Hospital, South Philadelphia. Located on the south side of the block between South 21st Street and South 22nd Street, the structure will rise from a 1,091-square-foot footprint and will contain 3,550 square feet of interior space, lending an average of 888 square feet per unit. Permits list Genece E. Brinkley as the owner, Scott Woodruff as the architect, and Chris Steinbiss as the contractor. Construction is expected to cost $400,000.

The project site consists of two standard rowhouse-sized plots. A three-story prewar rowhouse stands at 2118 Fitzwater Street, which appears occupied and well-maintained in Google Street View imagery from 2019. The adjacent lot at 2120 Fitzwater Street is largely vacant, aside from minor vegetation, folk art-style decoration at the pavement and o the walls, and a fenced-in garden in the rear. A single-story, apparently residential building spans the would-be rear yard space at both lots, which is a highly unusual occurrence for a standard rowhouse block.

The rowhouse at the site is rather ordinary yet is nevertheless attractive, designed in classic Philadelphia style with a red brick façade, a rusticated stone base, stone window lintels, and a bracketed cornice. Similarly, the adjacent garden adds a certain quirky charm to the block. The destruction of both will be somewhat regrettable, yet passable in the overall scale of things, especially since the new building will boost local density, fill in a street wall gap, and bring new construction to an area of the city that has not seen much new development in recent years.

Be the first to comment on "Permits Issued for Four-Unit Building at 2118-20 Fitzwater Street in Graduate Hospital, South Philadelphia"