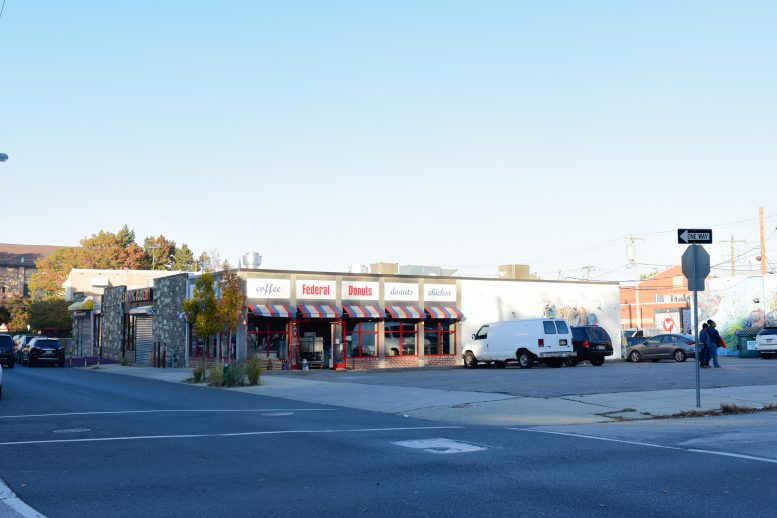 In August, YIMBY reported on permits that were issued for the construction of three mixed-use buildings at 711-19 North 7th Street in Northern Liberties, North Philadelphia, which will hold a combined total of 21 apartments. Each structure is planned to stand four stories tall and feature a mix of residential and commercial space, full sprinkling, and a green roof. Building #1 will span a 1,662-square-foot ground footprint, hold 7,220 square feet of interior space, include five residential units, and cost $866,400 to build. Buildings #2 and #3 will each rise from a 2,407-square-foot ground footprint, hold 10,504 square feet of space, feature eight residential units, and cost $1.26 million to construct. Our recent visit to the site, which took place three months after the initial filing, reveals signs that demolition may begin soon.

For each of the filings, permits list T & C Fairmount LLC as the owner, Brett Harman of Harman Deutsch Ohler Architecture as the design professional, and Qi Wei Chen as the contractor. 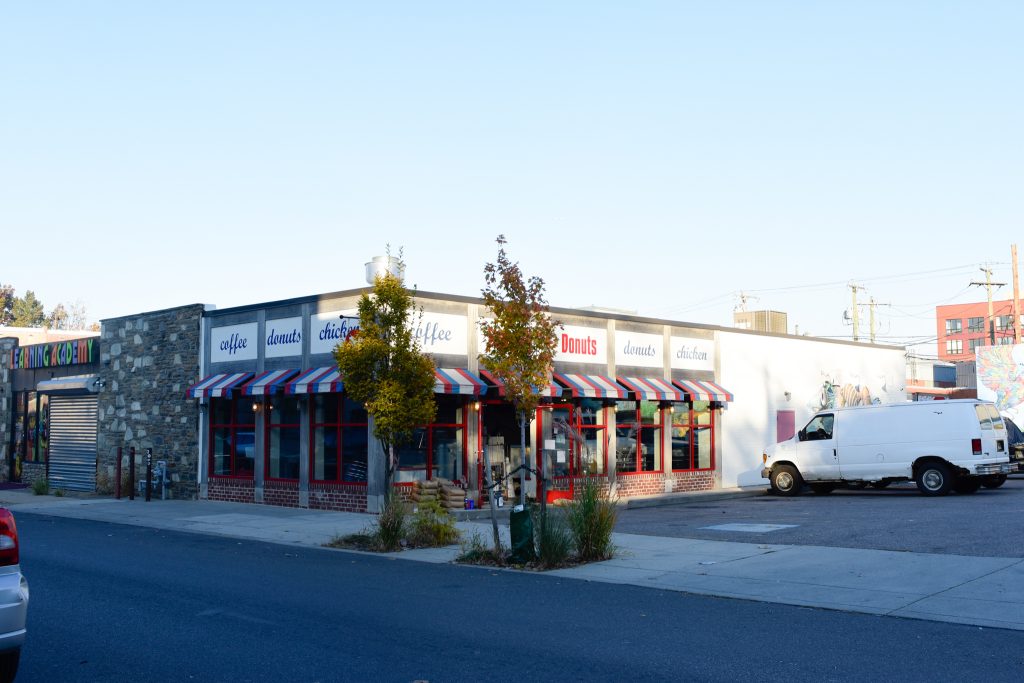 The site is currently home to a single-story, suburban-style strip mall that appears to have been built some time during the postwar period. The development sits near the northeast corner of the intersection of North 7th Street and Fairmount Avenue. A roughly 4,500-square-foot parking lot sits at the corner itself, while the retail structure itself extends along North 7th Street.

Our visit found the structure and the site still intact and free of any fencing or construction equipment. However, there are signs that progress is advancing toward demolition, permits for which were issued in January 2020. Incidentally, the renovation work in progress at Federal Donuts, a dining establishment located at 701 North 7th Street at the south end of the strip mall, is unrelated to the project at hand as the building is not part of the development site. However, the entrances and storefronts at the two daycare centers located next door at 713 and 175 North 7th Street, which are indeed scheduled for demolition, were shuttered with roll-down metal gates, as was Liberty Pizza, located at the strip’s northern end at 717 North 7th Street. Although Google lists these establishments as “temporarily closed,” we may assume that demolition may begin shortly after the interiors are fully emptied out.

No renderings are currently available for the proposed development. However, a document submitted to the city reveals rudimentary plans, sections, and an elevation that give us a rough idea of the structures’ future appearance. Buildings #2 and #3 will take up the majority of the site, each with footprints measuring 38 feet wide and 67 feet deep and with light wells at their interiors. Building #1, the smallest of the group, will sit at the site’s angled northern end. All three buildings will face North 7th Street with shallow, angled cantilevers, each projecting three feet in front of the main facade, set in an alternating pattern. It also appears that the corner parking lot, sited at 701 North 7th Street, will be preserved. 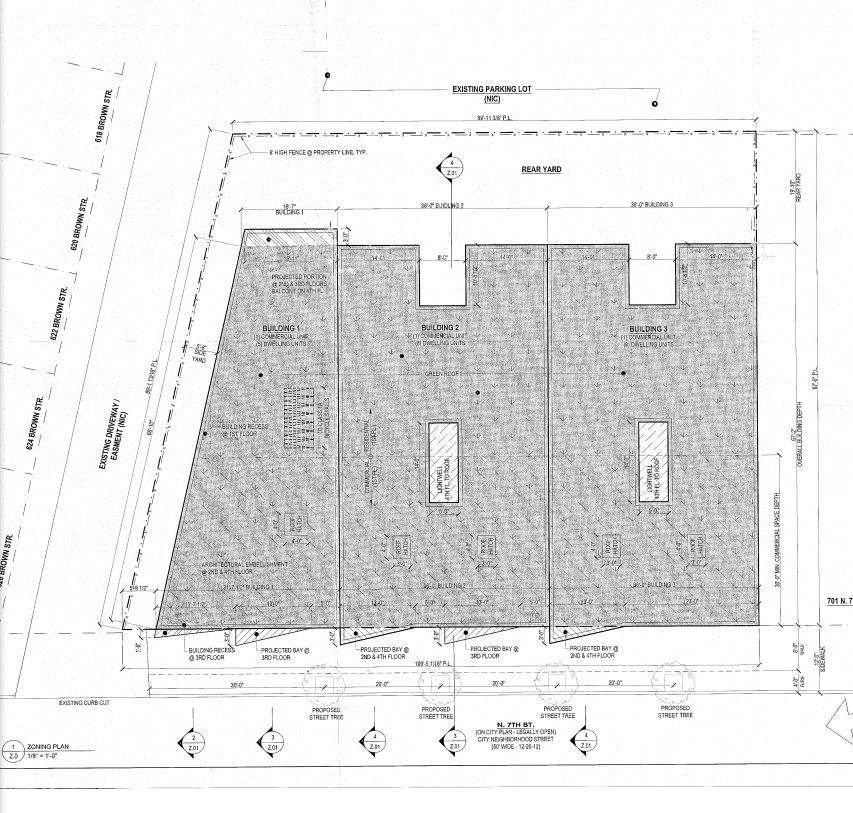 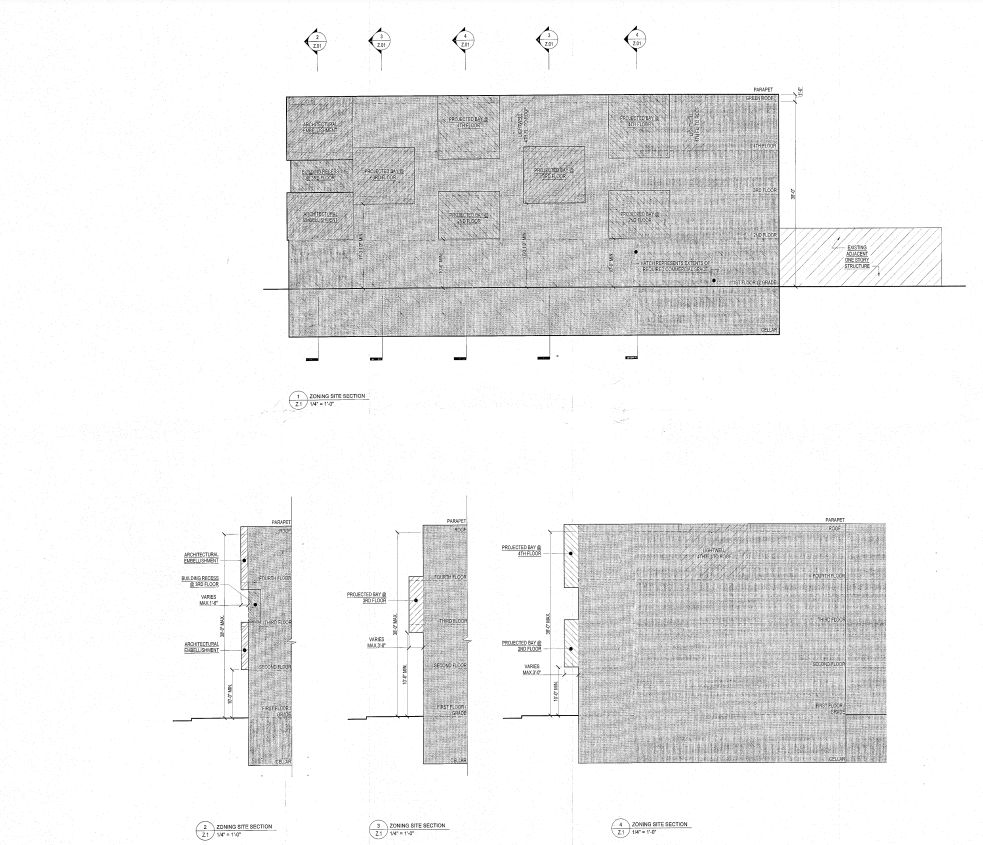 The development sits at the western edge of Northern Liberties, within the neighborhood’s quiet yet densely built out northwest quadrant that we covered in a recent feature. The project is the latest step in the continuing process of reintroduction of density and mixed-use program into a neighborhood that was heavily affected by sprawling, car-oriented development in the postwar period (particularly Poplar, which extends to the west). Across the street to the west, a complex of avant-garde townhouses replaced a parking lot between 2014 and 2016. 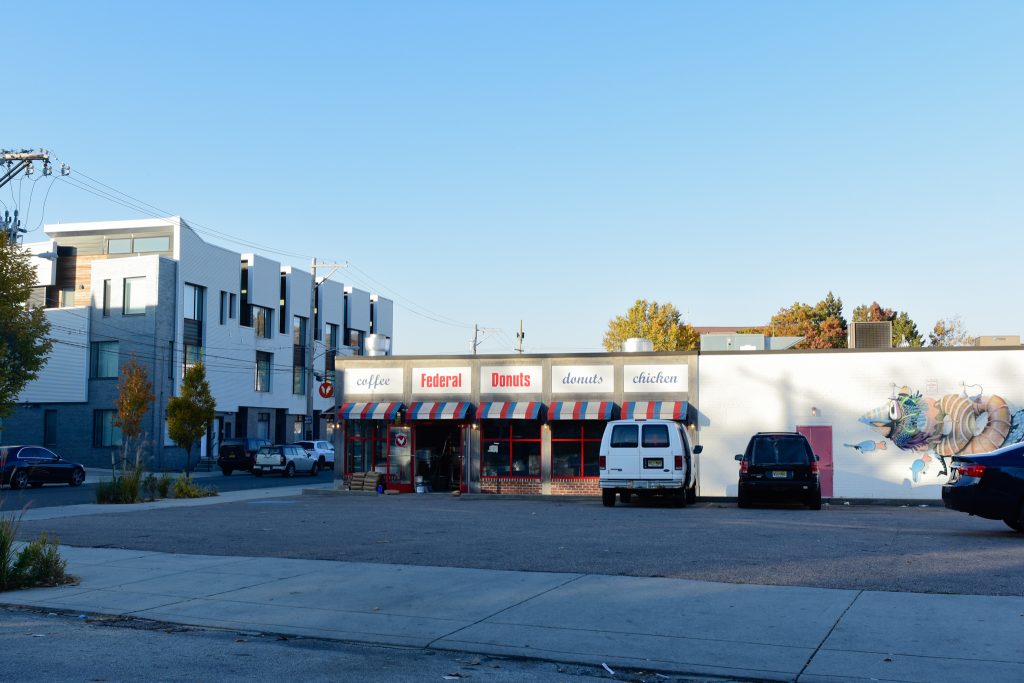 The proposal is appealing as it offers an evenly-matched replacement for the retail that it destroys in the process of construction, while offering the added bonus of increased density, new housing stock, and additional permeable surfaces in the form of green roofs. The site’s appeal to future residents lies with its walking-distance proximity to the many retail, dining, and entertainment establishments of Northern Liberties, as well as Center City to the south, Temple University to the north, and the Delaware River waterfront to the east.

From an architectural perspective, the demolition of the strip mall will present no notable loss, although the building’s alignment with the sidewalk line and rusticated stone on the blank walls set it a notch above the average featureless suburban-style retailer. While the parking lot at in front of the donut shop remains as out of place as ever, at least its whimsical donut-fish mural will remain intact, at least for the time being. In either case, we welcome this incoming addition to a neighborhood with a centuries-long history behind it and a promising future still ahead.