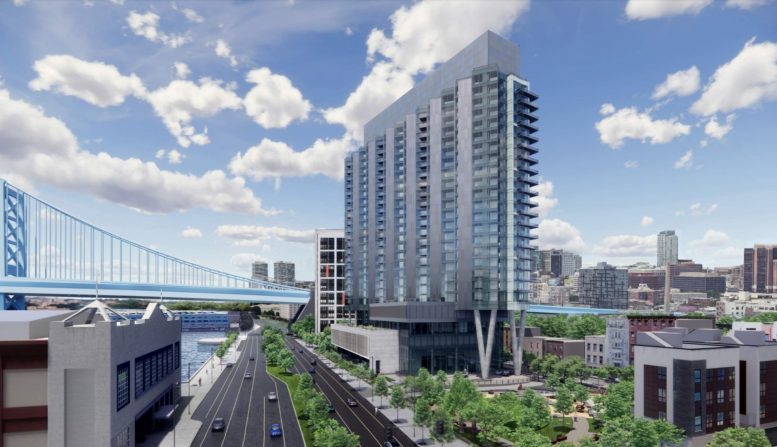 Philly YIMBY’s recent visit to 300 North Christopher Columbus Boulevard, the site of a planned 27-story, 360-unit rental high-rise, revealed new, if inconclusive, activity at the surface lot, although no direct signs of ongoing excavation have yet been spotted. Designed by Handel Architects and developed by The Durst Organization, the development will consist of a 316-foot-tall tower with 10,094 square feet of ground-level retail, sited next to a new public park, which is also part of the development. The project is located on the Delaware River waterfront a block to the north of the Benjamin Franklin Bridge, on the border between Northern Liberties to the north and Old City to the south. 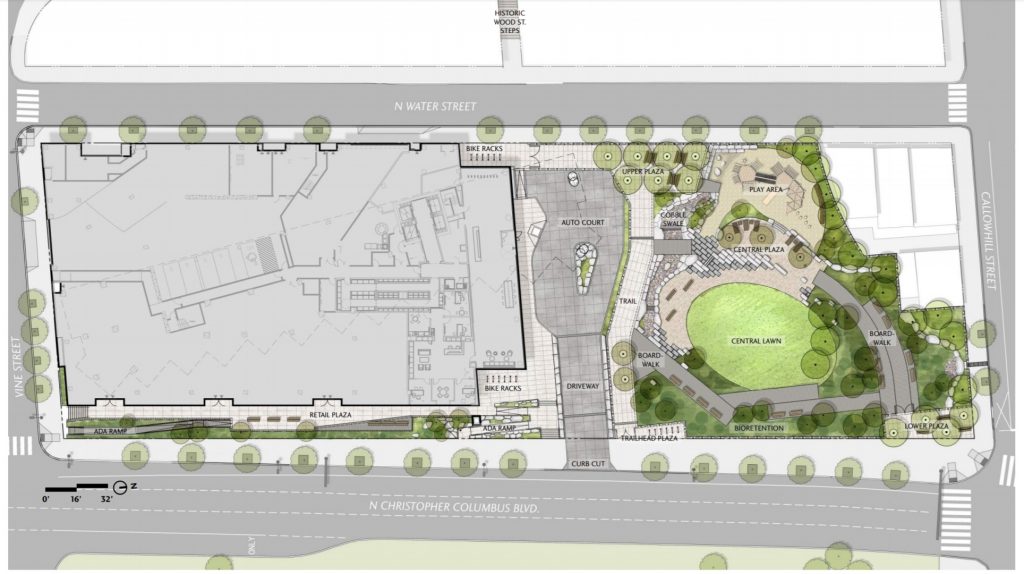 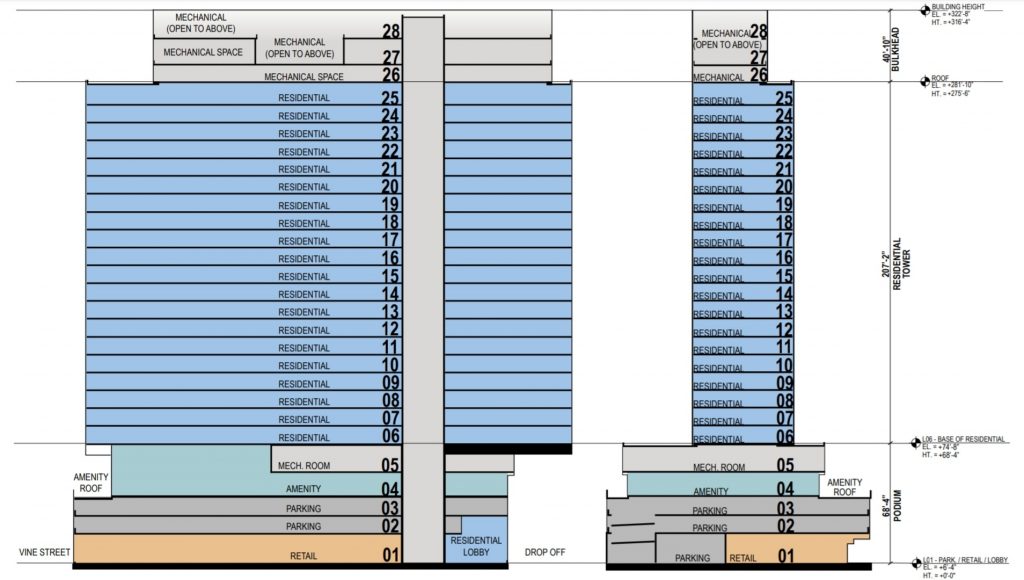 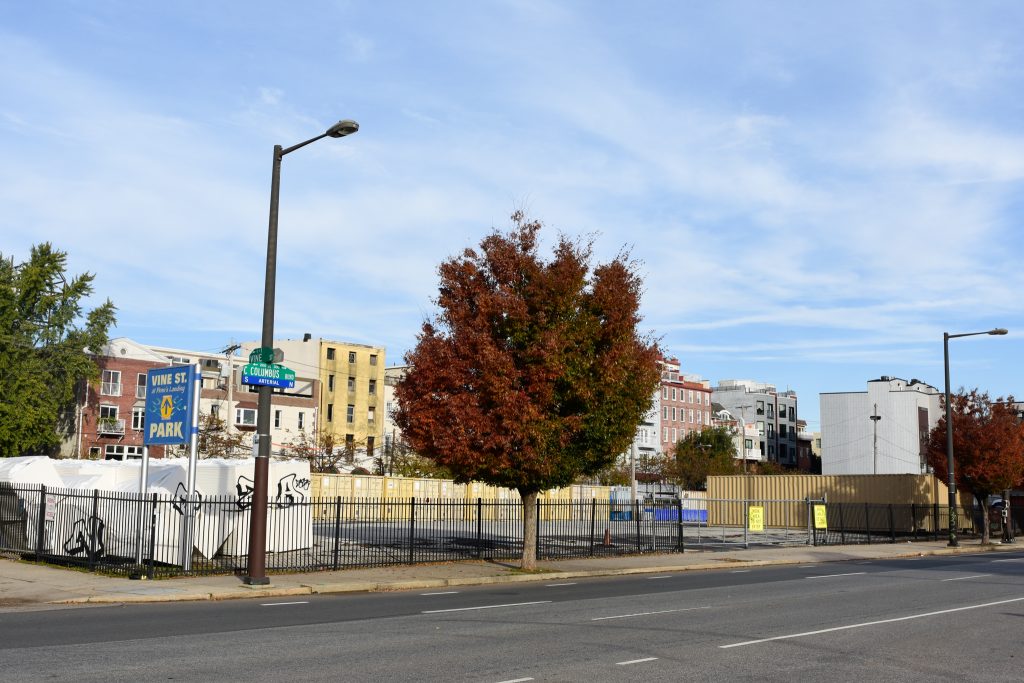 The development will span nearly an entire city block, bordered by North Christopher Columbus Boulevard to the east, Vine Street to the south, Water Street to the west, and Callowhill Street to the north. As the site is located just to the north of Vine Street, the traditional boundary of Center City, we classify it as part of Northern Liberties and Lower North Philadelphia, although we are sure that there are plenty of residents and realtors alike that would bill the project as part of Old City instead.

A conditional zoning approval was issued for the project in November of last year. YIMBY’s most recent visit to the location took place a month later. At the time, we found that the parking lot, which spans the entirety of the site, was already shuttered and vacant, aside from a single shipping container and a few vehicles.

A construction permit for the tower was issued in August of this year, paving the way for further on-site work. Our recent site visit revealed that no excavation work has yet taken place, with the surface lot still apparently sitting intact. At this time, it appears that the site is being used for storage, with an array of shipping containers, pallets of construction materials, and construction machinery sitting at the site. It is unclear whether the material and equipment is intended for the project at hand or for some other purpose. 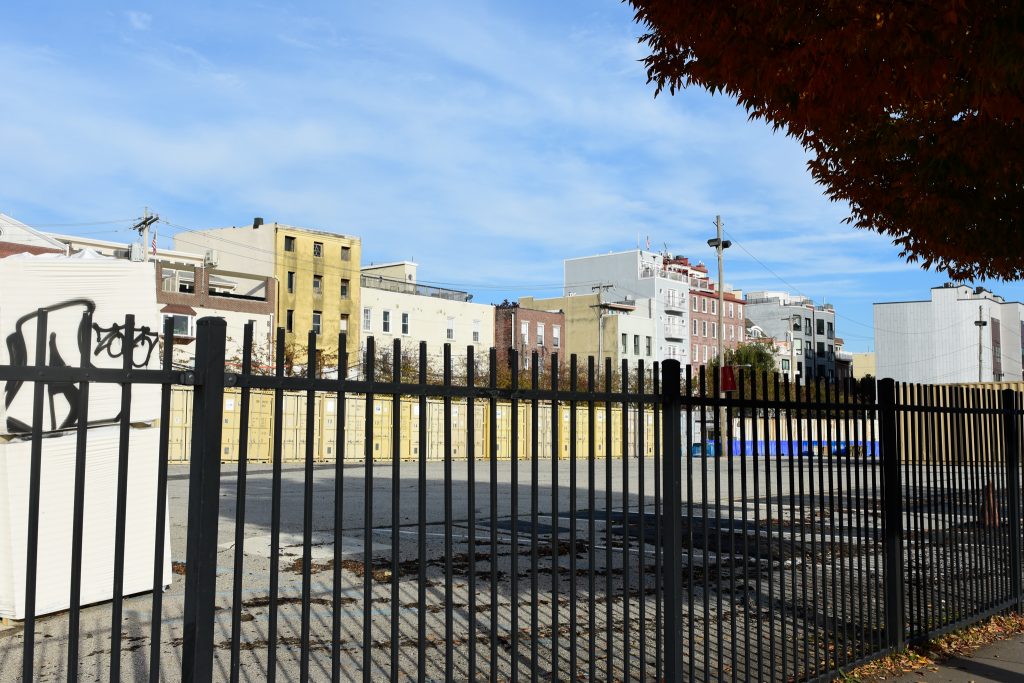 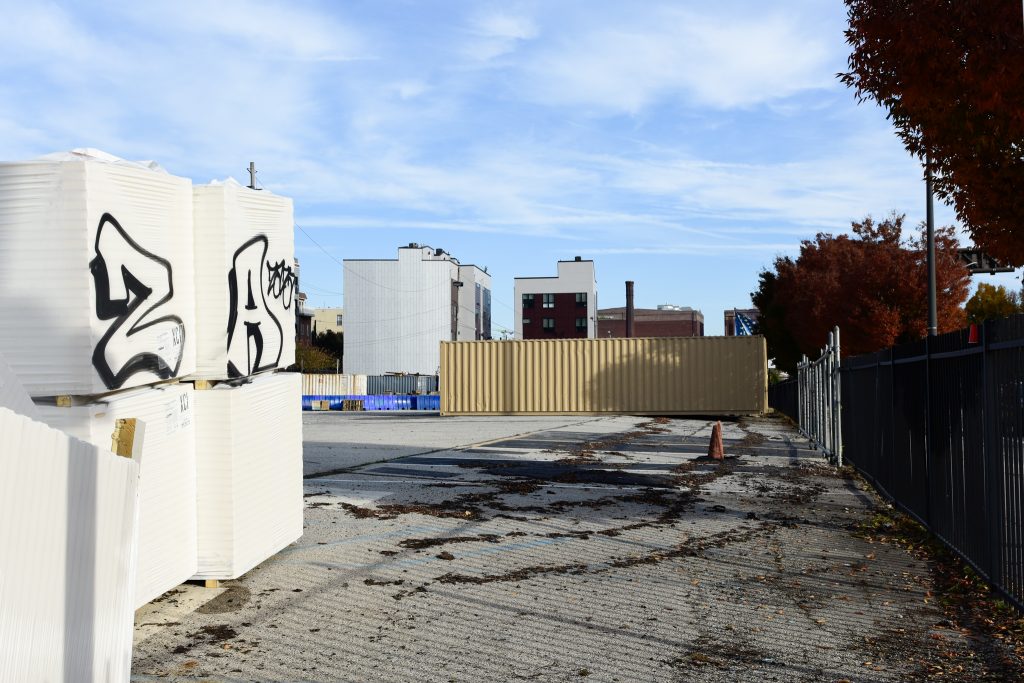 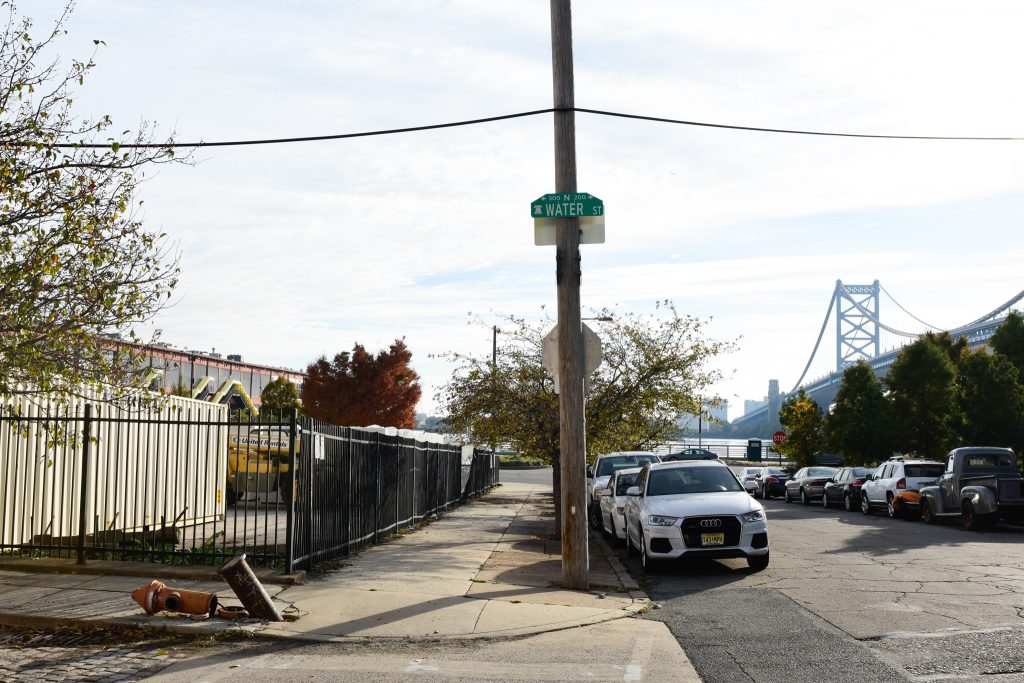 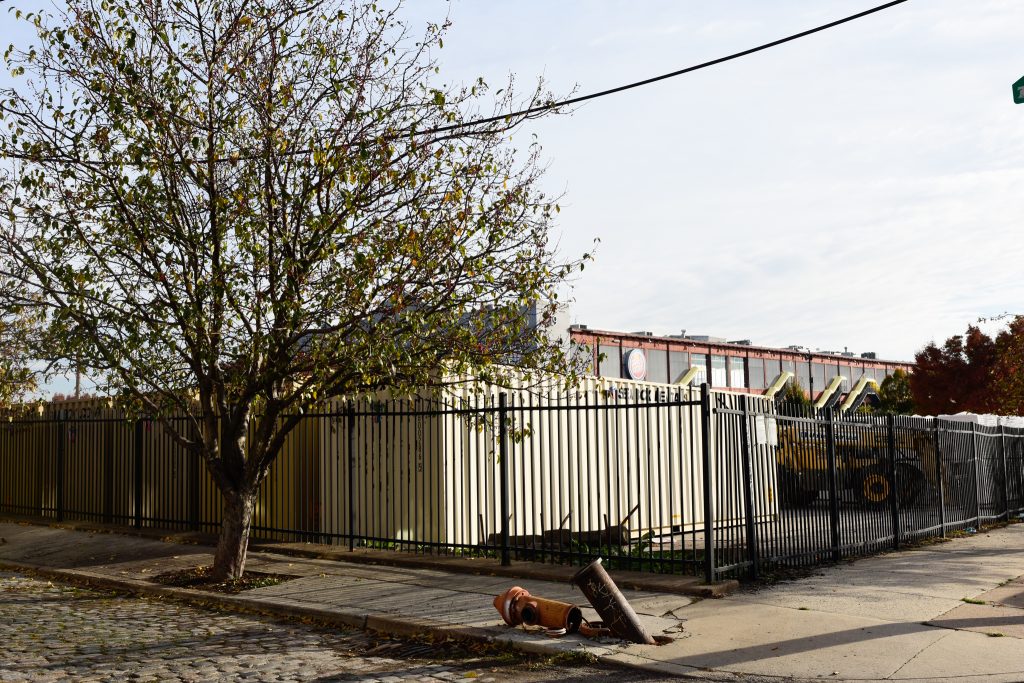 We hope to see further definitive progress when our next visit takes place. The project, also known as the Vine Street Development as per documents submitted to the city, is one of the most ambitious and exciting to be found on the drawing boards either in Northern Liberties or in Old City. The prospect of getting rid of the eyesore parking is as welcome as the construction of the striking high-rise, notable for its zigzag facade facing the river, the addition of new retail and hundreds of apartments to the neighborhood, improved connection to the waterfront, and the creation of a new public park that is sure to become a beloved community destination in short time. 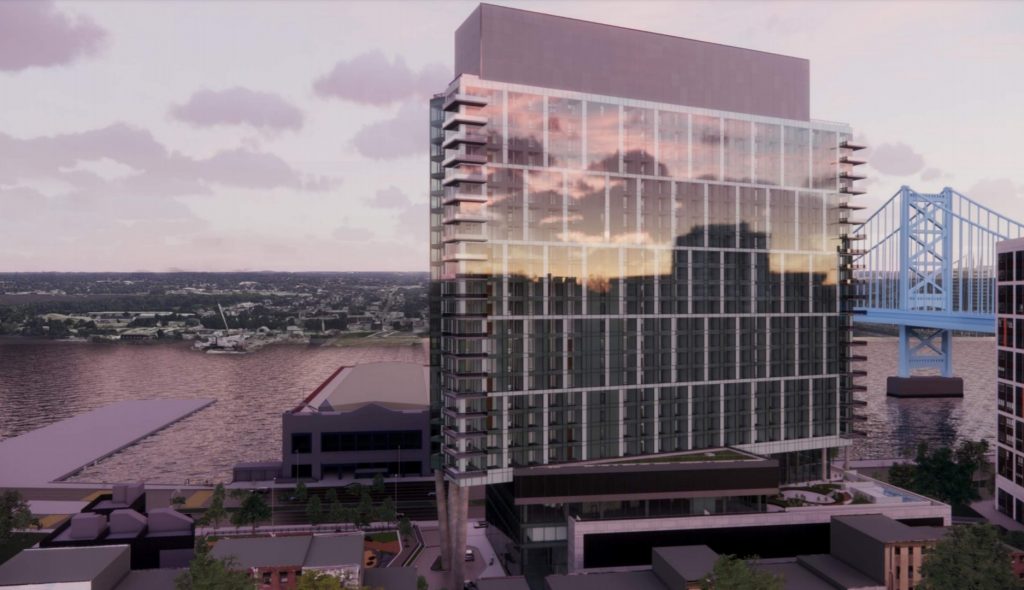