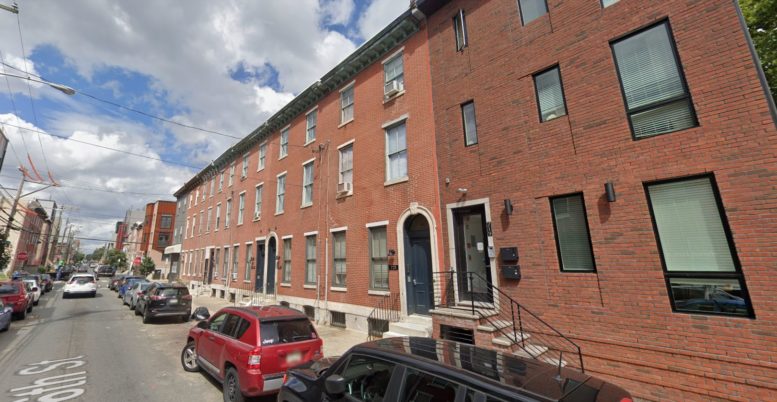 Permits have been issued for the construction of a five-story, ten-unit apartment building at 721-23 North 16th Street in Fairmount, Lower North Philadelphia. The development will be situated on the east side of the block between Swain and Brown streets, in an area that may also be described as Francisville. The project will replace a pair of three-story, apparently well-maintained prewar rowhouses and will hold a total of 11,048 square feet of interior space, which translates to a sizable average of 1,100 square feet per unit. The building will feature full sprinkling, a cellar, and a roof deck, which, due to the building’s prominent height, promises to offer sweeping skyline views. Permits list Mountfair Assoc. as the owner and Regis Development Corp. as the contractor. Construction costs are specified at $725,000.

The development will be the latest entry into a construction boom that is dramatically transforming the surrounding area into one of North Philly’s most densely-populated vibrant neighborhoods. New, primarily residential projects are rising all around. Three new buildings have been completed on the block and across the street just within the past two years. Steps away, completion nears at The HQ, a four-story, 30-unit development at 710 North 16th Street. A block to the east, new development has transformed diagonal Ridge Avenue nearly beyond recognition over the course of the past five or so years, with more new construction still in in progress.

As welcome as this neighborhood revival may be, it comes at a certain cost. While there are effectively no downsides to new buildings being constructed on vacant lots, the real estate boom occasionally razes rather attractive buildings in its wake, such as the rowhouse pair slated for the wrecking ball to make way for the proposal at 721-23 North 16th Street. Both buildings are fine examples of the Philadelphia rowhouse vernacular and are part of a continuous, nearly block-long ensemble. Moreover, both appear to be in great condition, with barely any wear and tear on the facades. A similar rowhouse has already been demolished across the street at 722 Ridge Avenue around 2019, making way for a building that appears only around ten or so percent larger than its predecessor.

Demolition of aged buildings is often a necessary, if regrettable, part of urban progress. However, new replacements almost never live up to the refined architectural standards of their prewar counterparts (certainly, none on the block at hand do). It becomes even more frustrating when to-be-demolished buildings appear to be in good condition as well as when their replacements bring barely any increase in housing density.

In order to encourage continued construction throughout Philadelphia while preserving its historic charm, the city ought to both upzone wide swathes of its territory, particularly in transit-adjacent areas, strengthen historic protections, incentivize voluntary preservation and inclusion of original construction into new projects, and facilitate air rights transfers to nearby development-favorable sites.