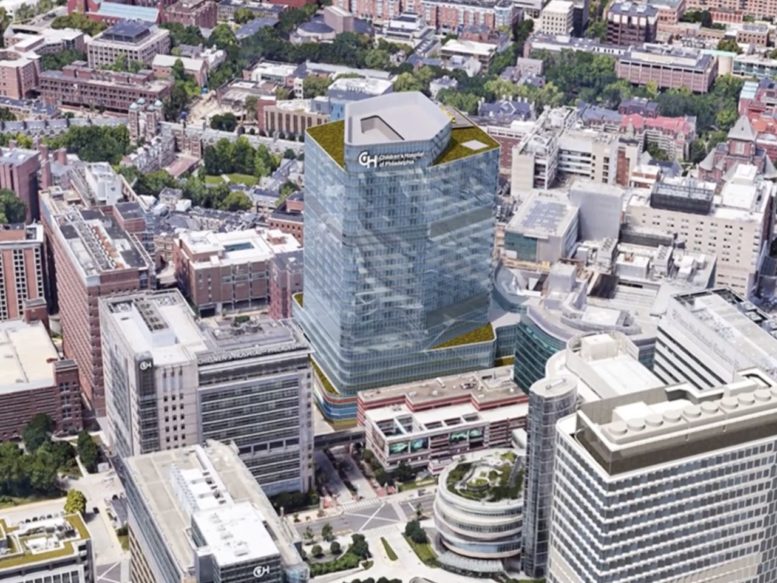 In recent years, the Children’s Hospital of Philadelphia has been in the process of expanding its University City campus via a $3.4 billion development plan, a major part of which is the $1.9 billion Inpatient Tower (aka New Patient Tower) proposed at 515 Osler Circle. Recently, a Philly YIMBY contributor has shared a pair of new renderings for the project. The Inpatient Tower was designed by Ballinger, with ZGF Architects (which has previously teamed up with CHOP to design its Medical Behavioral Unit) as the consultant and interiors/clinical architects. In addition, we present a separate drawing set consisting of a floor plan and building section, which reveal an updated structural height and a detailed building program. The schematics show that the tower will rise 434 feet and 23 stories tall and will span a total of 1.318 square feet, making for a significant addition to West Philadelphia’s already impressive medical sector.

As far back as early 2020, the Children’s Hospital’s 560-bed facility, which services not only the city of Philadelphia, but also the greater metropolitan region, as well, has been strained to near-capacity, according to hospital representatives. The CHOP Inpatient Tower will boost the medical center’s bed count by up to 504, thus nearly doubling the hospital’s current inpatient capacity. 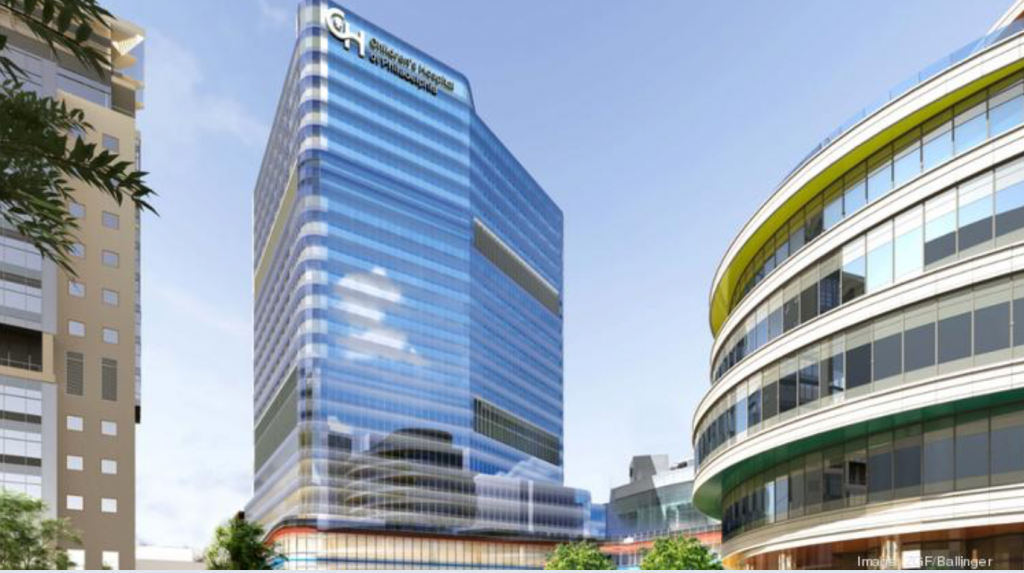 The basic appearance of the tower (as seen in the previously-shared image above), which has also been previously referred to as the CHOP University City Tower, has been known for some time by now. The proposal was once said to rise 380 feet tall, a height that earned it the eighth place on our end-of-year 2021 countdown as well as on our subsequent Ultimate 2022 Philly Skyline Rundown. At the time, we tentatively listed the tower’s address as 3401 Civic Center Boulevard. 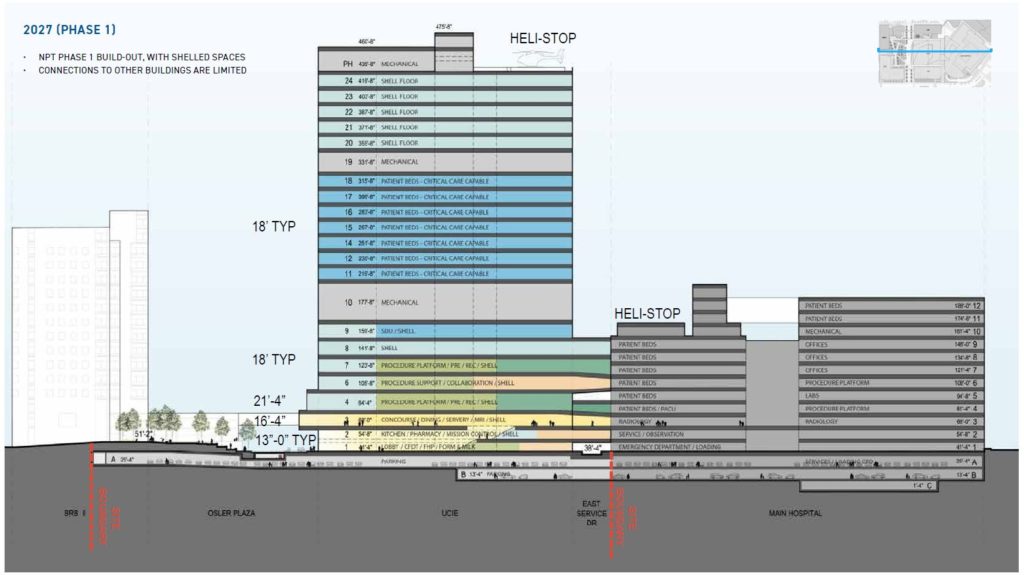 The first nine floors will hold the cardiac center, periop/OR floor, the birthing center, an imaging suite, a pharmacy, kitchen, and Mission Control. The structure will be connected directly to the Main Building and the Buerger Children’s Hospital building. Just like the existing hospital building, the new tower will be equipped with a helipad.

The upper floors will hold critical care-capable beds that will be spec’d to service the NICU, CICU, and the PICU. Floors 11 through 18 are listed as housing patient beds while floors 20 through 28 are specified as “shell floors,” which appears in line with an earlier description by the Inquirer stating that the facility will be introduced with 300 beds and space for an eventual 200 more. For those keeping track, note that the floor count skips the fifth floor (to align with the floors at the Buerger Hospital) as well as the 13th floor. 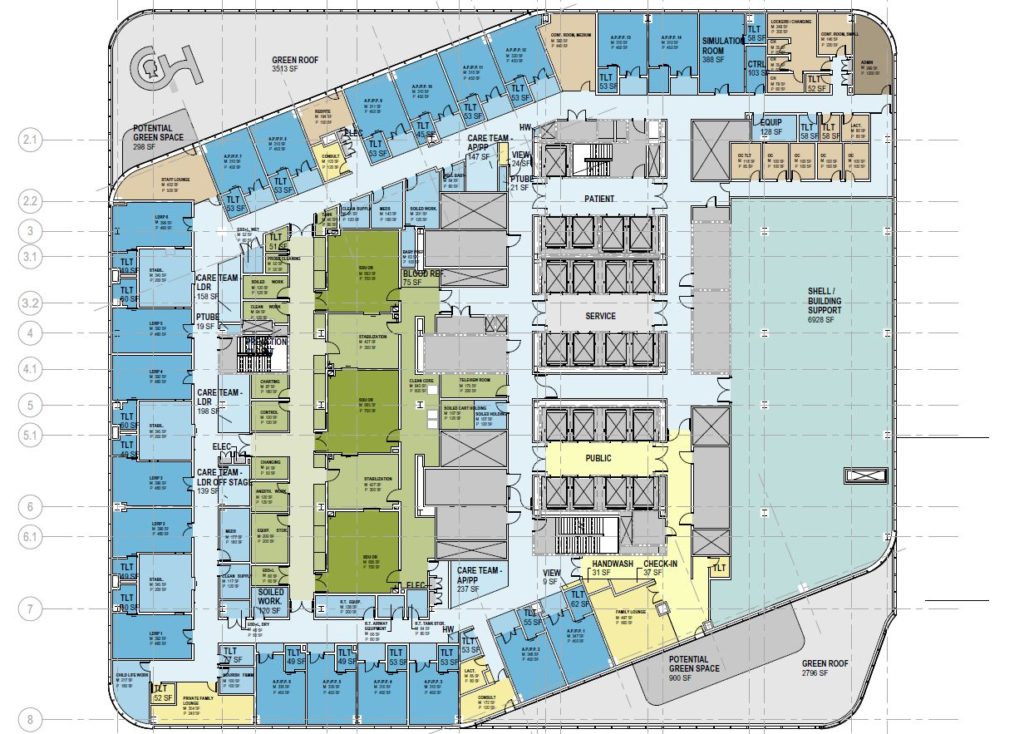 The schematics indicate that the patients will be accommodated in a palatial setting that goes far and beyond standard hospital facilities. The typical floors will rise 18 feet high, roughly double the height of an average residential floor. The patient rooms will be located along each floor’s perimeter (with treatment rooms situated in the bulky tower’s interior), making for ample daylight and views, further boosted by sweeping floor-to-ceiling windows.

Notably, all the new beds are planned to be situated in private rooms, which is significant not only for the emotional well-being of patients and their families, but also limit the risk of transmission of communicable diseases.

Judging by the floor plans, the tower will be serviced by at least 21 elevators and will boast several landscaped terraces that will offer up to around 7,000 square feet, and possibly significantly more, of outdoor space.

While the new rendering submitted by our contributor, shown at the beginning of the article, shows that the design remains the same as before, it serves to underscore the impact the structure will have on the burgeoning Medical District, which is rapidly expanding on the southern fringe of University City.

The district may be described as spanning to the south of Spruce and South streets along the Schuylkill River waterfront. The area, which has already boasted a skyline densely packed with buildings rising up to around 300 feet, was recently boosted with massive additions such as the University of Pennsylvania’s recently-completed Pavilion as well as CHOP’s under-construction Hub for Clinical Collaboration. But even considering the notable height and immense square footage of these new structures, the CHOP Inpatient Tower will eclipse them all, creating a new visual centerpiece for the local skyline, nestled right at the district’s center. The building will replace the six-story, Postmodern-styled Richard D. Wood Pediatric Ambulatory Care Center and a portion of the adjacent Osler Plaza and drive aisle. 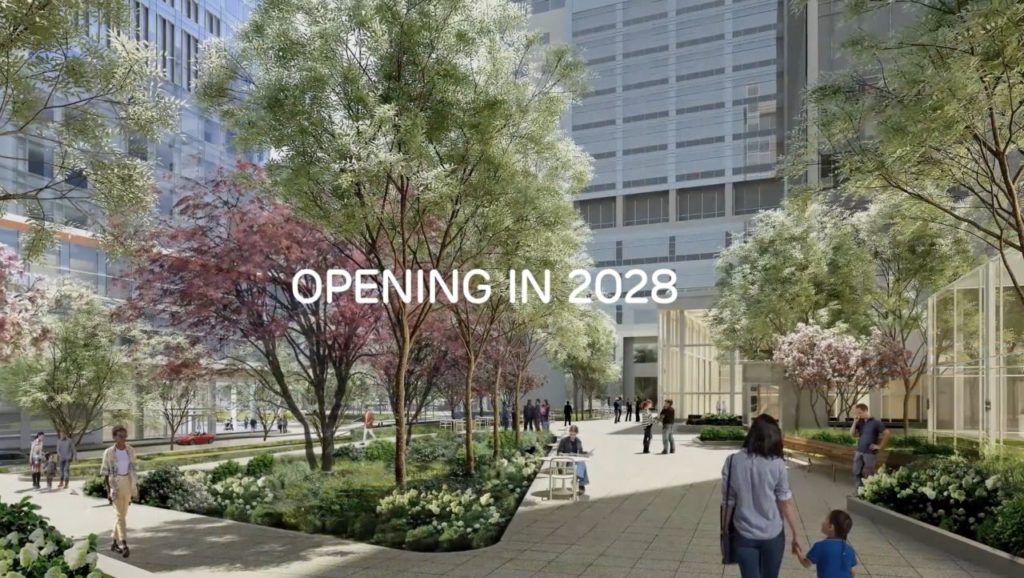 As our regular readers certainly know by now, we actively support new development throughout Philadelphia as long as it does not displace any notable historic structures and is supported by sufficient transit and social (educational, medical, etc.) infrastructure. The new CHOP Inpatient Tower is precisely one of such infrastructure-boosting developments, which effectively utilizes the vertical dimension in a densely-built district to create state-of-the-art medical space that will serve ours and the future generations.