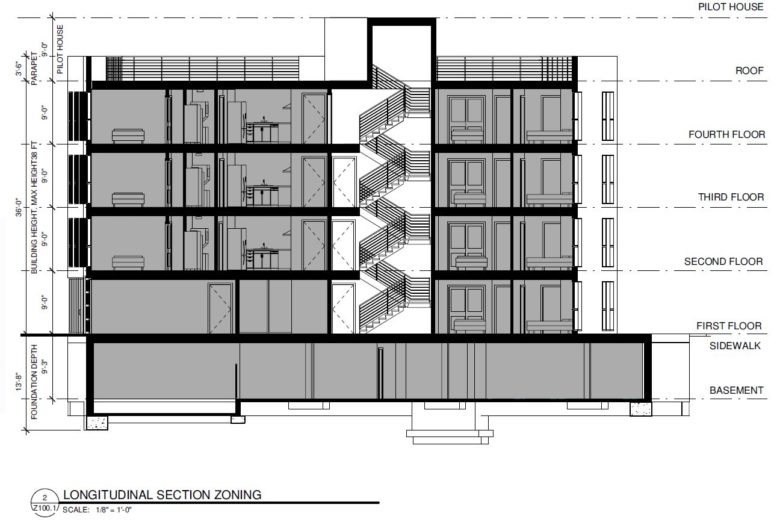 Permits have been issued for the construction of a four-story, eight-unit mixed-use building at 2059 Germantown Avenue near Temple University in North Philadelphia East. The development will rise from a vacant lot at the southeast corner of the intersection of Germantown Avenue and Diamond Street. Designed by Plato Marinakos of Plato Studio, the building, alternately known as 2059-63 Germantown Avenue, will span 16,121 square feet and will feature 1,297 square feet of commercial space, elevator service, a cellar, and a roof deck, which promises to offer sweeping skyline views thanks to the structure’s prominence. Prestige Design is apparently both the owner and contractor, with permits listing Prestige Design on Germantown as the owner (at least on the blueprints; Amorski Investments LP is listed as the owner on the Department of Licenses and Inspections website) and Ofir Komerian of Prestige Design on Girard as the contractor. Construction costs are specified at $1.8 million. 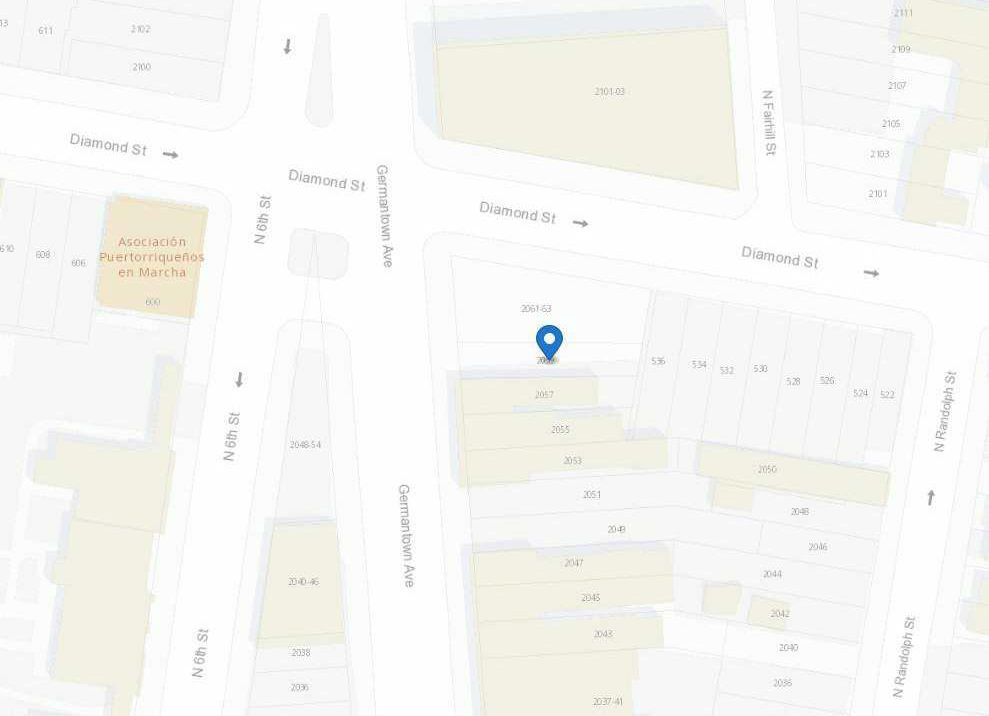 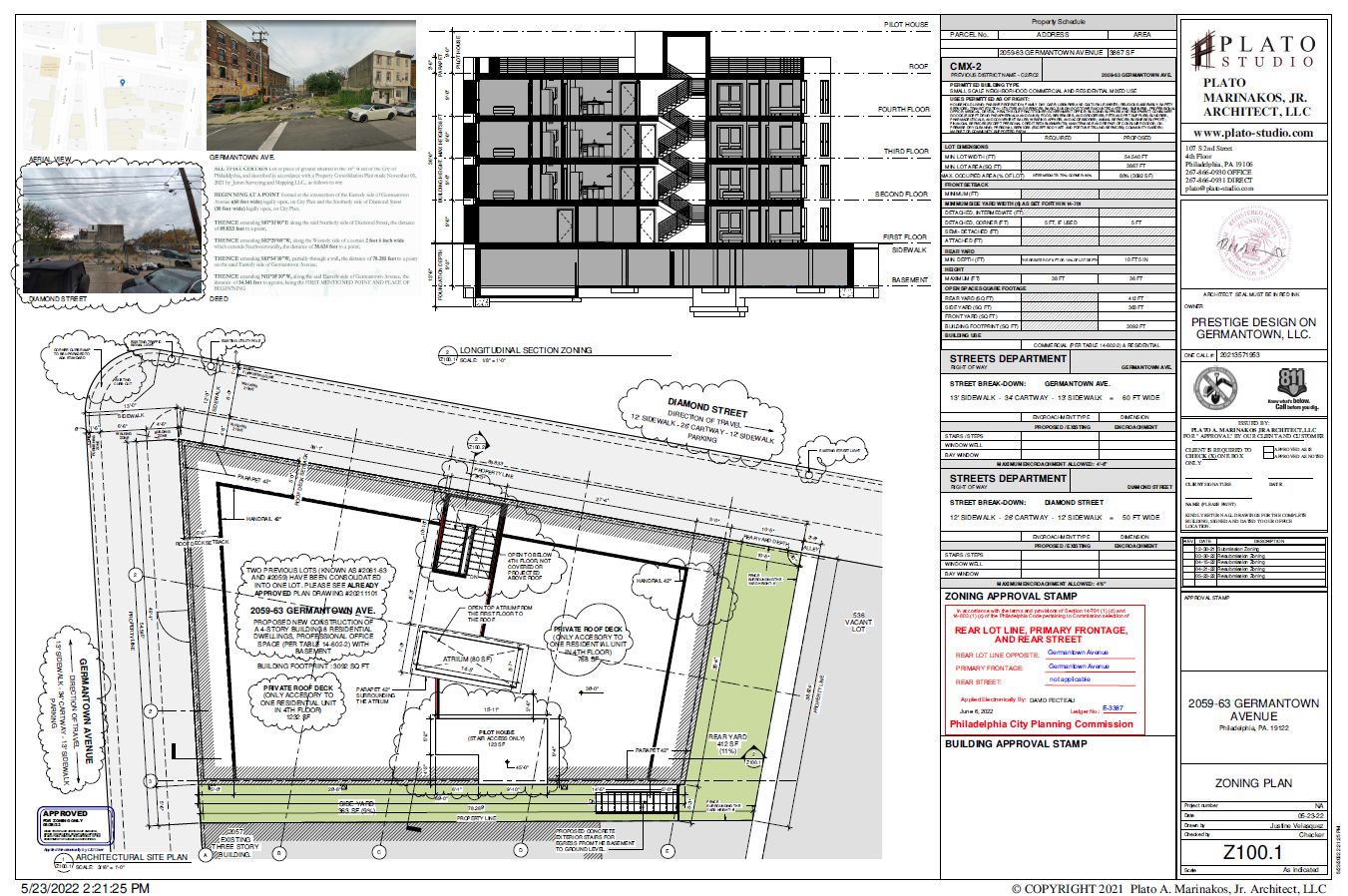 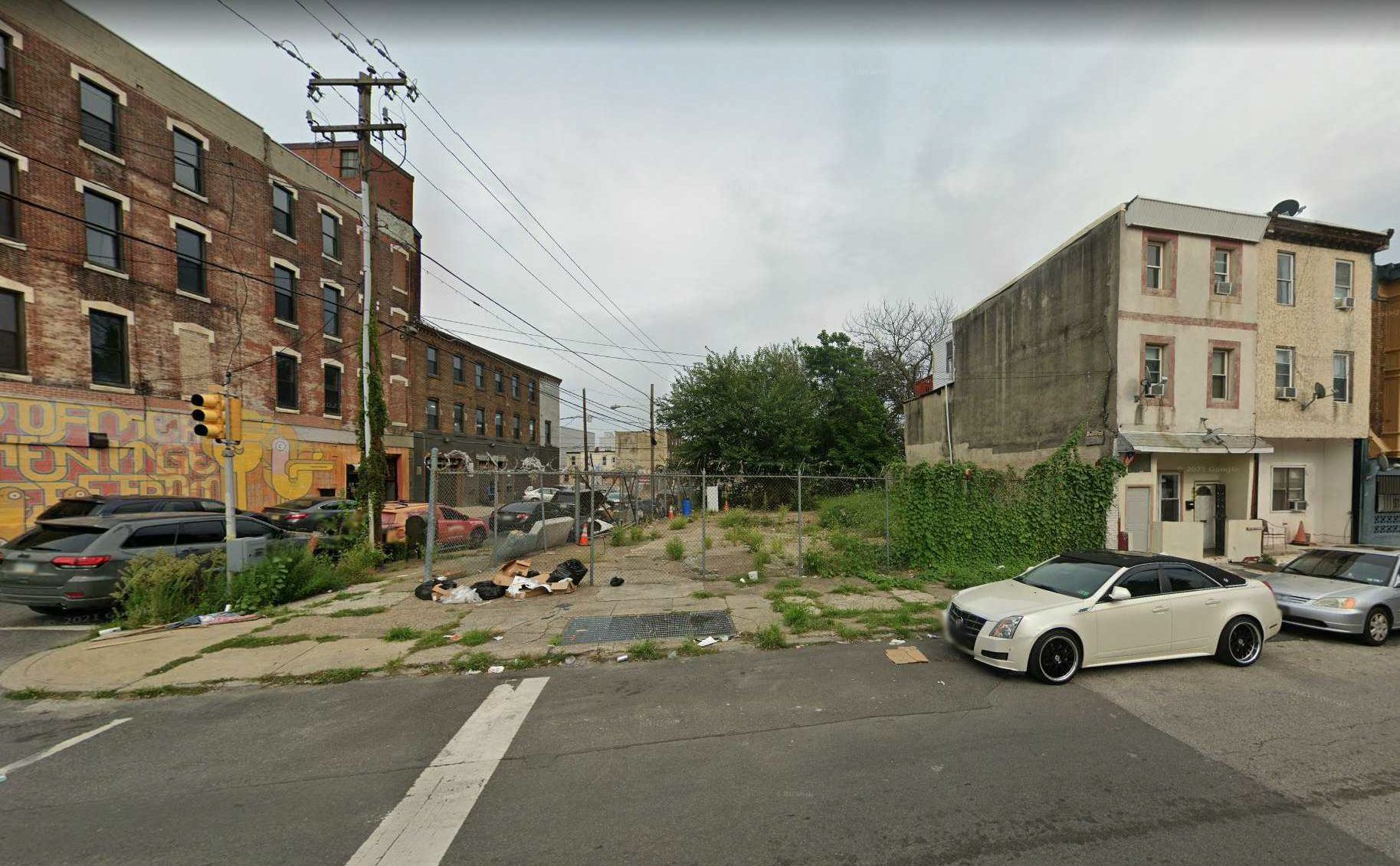 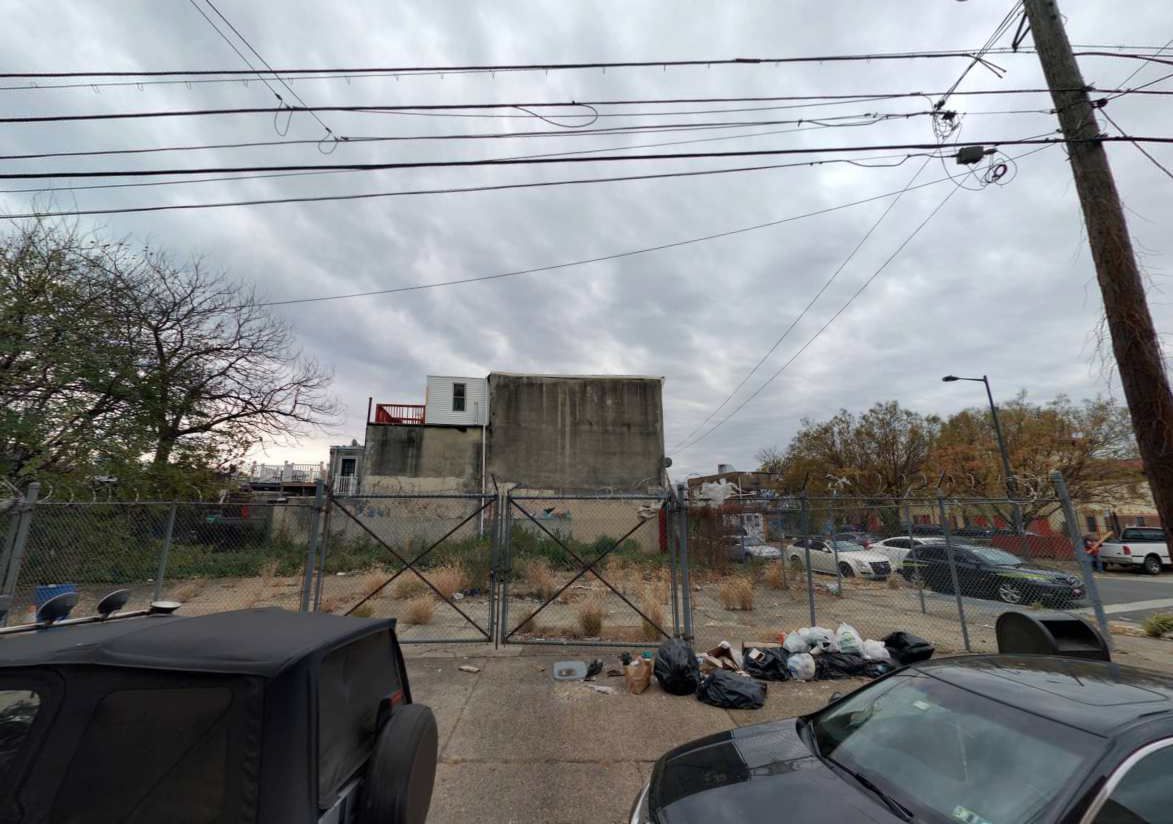 Permits for 2059 Germantown Avenue were issued for the same day as permits for 1525 North 7th Street, a four-story, six-unit development proposed by the same project team in the nearby Ludlow neighborhood to the southwest. 2059 Germantown Avenue will rise 36 feet to the main roof, 40 feet to the parapet, and 45 feet to the pilot house. Though the height stats are exactly the same as those for its Ludlow counterpart, the two proposals are markedly different in terms of concept.

The project at 1525 North 7th Street spans a standard mid-block site and is massed as a regular rectangular building with a small side courtyard. By contrast, 2059 Germantown Avenue will rise from an irregular, 3,092-square-foot trapezoidal footprint with street frontage on two sides. The building will be set back five feet from its neighbor to the south and ten feet from the adjacent alley to the east, which will allow for windows on every side.

The corner space and the entire Germantown Avenue frontage will be allocated for commercial space, listed as “professional office space” in the plans. The residential entrance will be located on Diamond Street, where an atrium, illuminated by a skylight, will offer access to the elevator, two stair banks, and the single ground-floor residential unit.

Like the proposal at 1525 North 7th Street, 2059 Germantown Avenue will boast a basement that will span the entirety of the site and will extend beneath the rear yards, a simple yet ingenious and rarely-used architectural solution that effectively utilizes valuable urban space in a city where numerous neighborhoods are hamstrung by overly restrictive height limits. 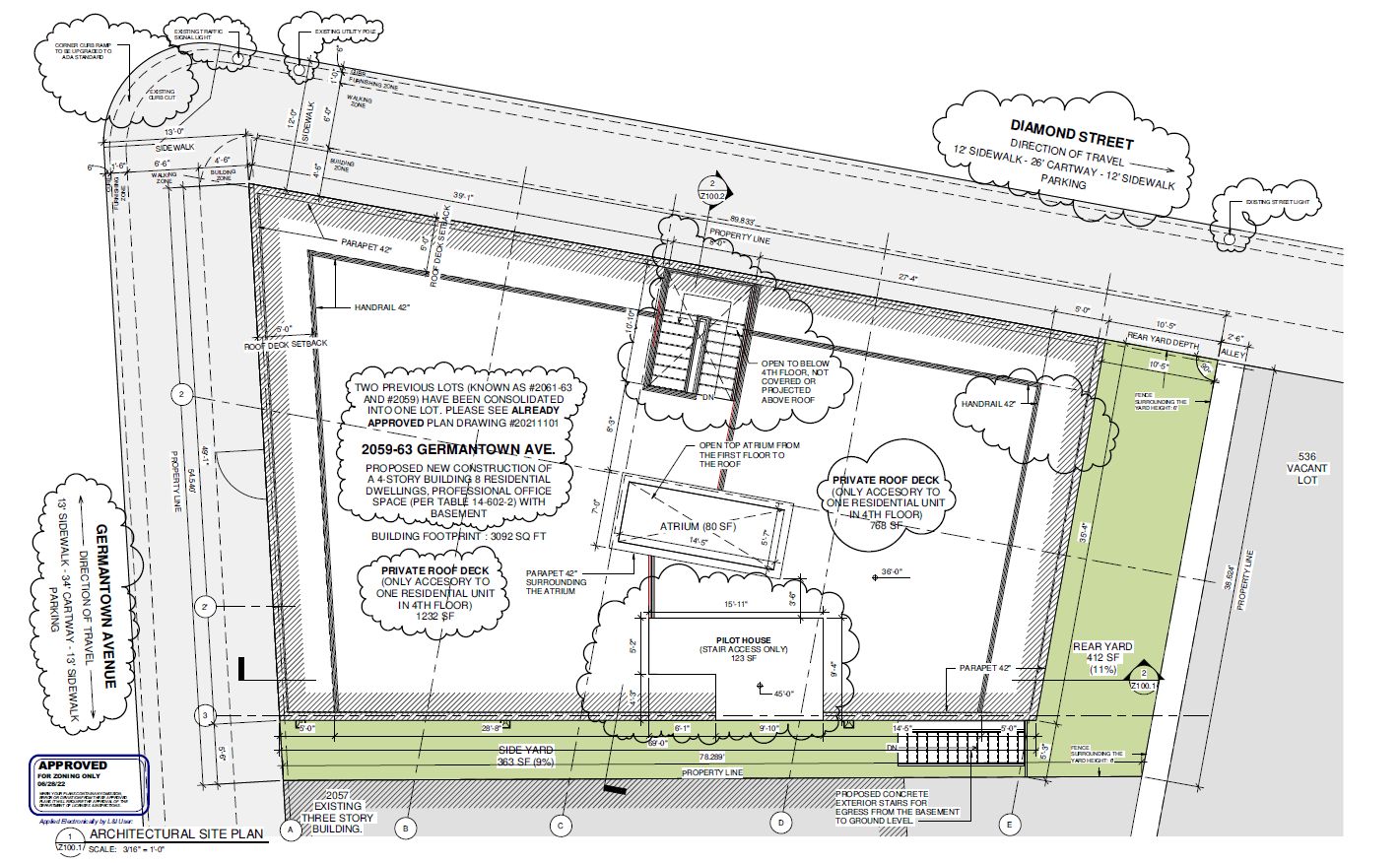 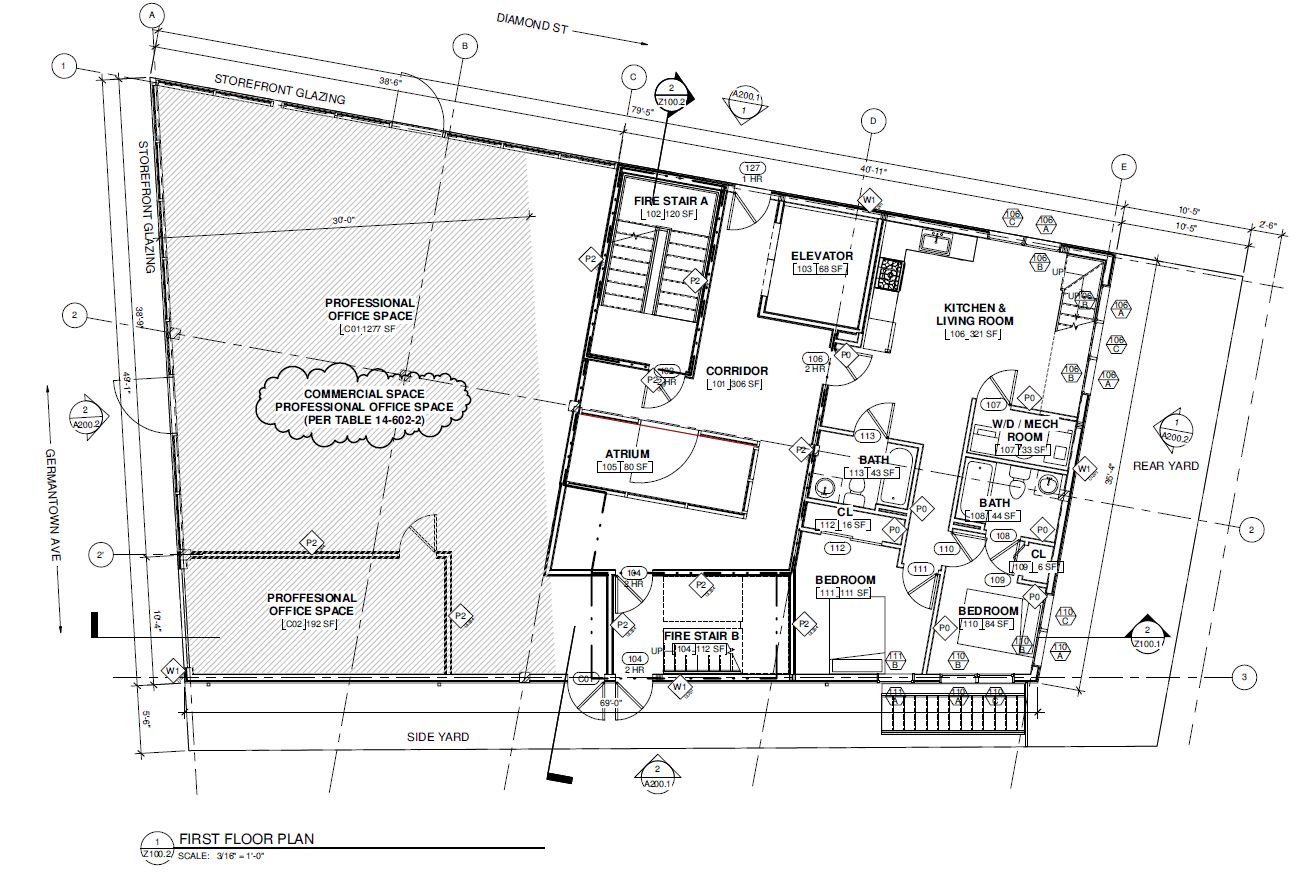 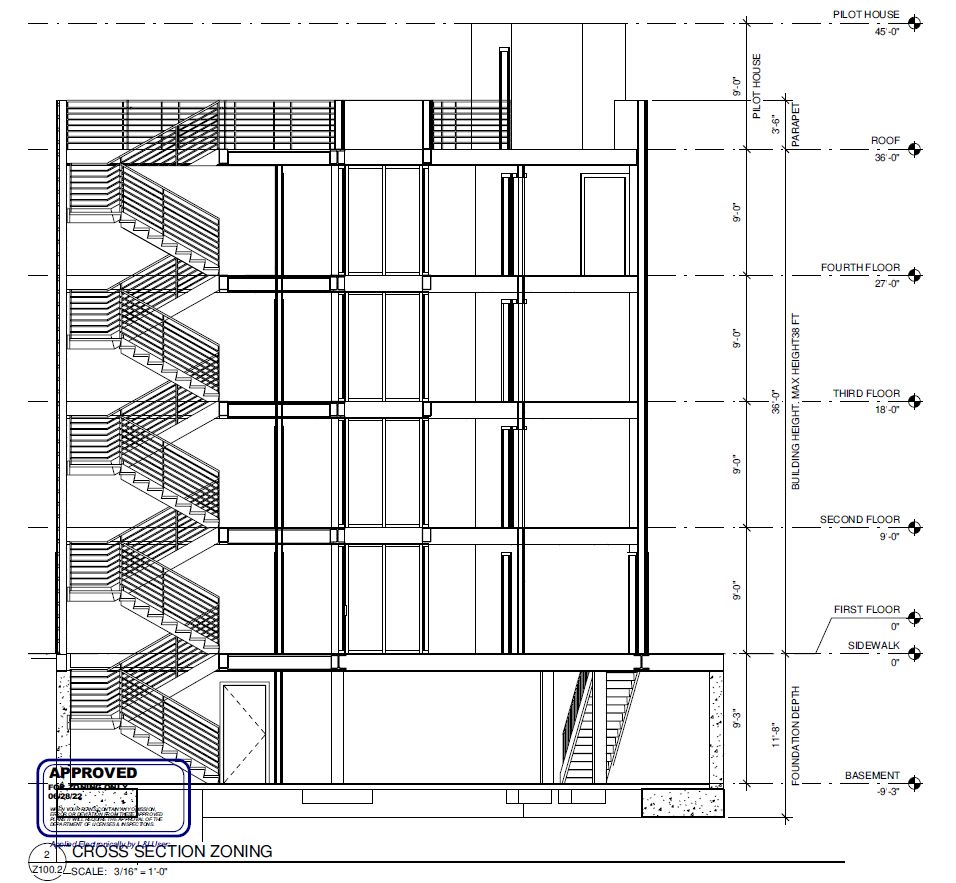 The Prestige development team is notable for having produced numerous mid-rise apartment buildings in Lower North Philadelphia, especially along North 7th Street, in recent years. All of these buildings share a virtually identical aesthetic of gray panels, floor-to-ceiling windows, and “Prestige Pavilion” signage emblazoned in front of every building. Although no exterior renderings are currently available for 2059 Germantown Avenue, this is the aesthetic we may expect at the project, as well, although we are yet to see it applied to a freestanding, rather than attached, building rising from an irregular site. For reference, readers may wish to take a look at the building recently completed nearby at 1929 North 7th Street.

For the past two decades, Temple University, situated within a seven-minute walk to the west of 2059 Germantown Avenue, has been a significant driver of new development throughout North Central Philadelphia, which was particularly negatively affected by depopulation and subsequent mass demolitions during the postwar period.

In recent years, however, this rather desolate section of North Philly East has been steadily filling with new development, and 2059 Germantown Avenue promises to make yet another positive contribution toward the neighborhood’s revival.