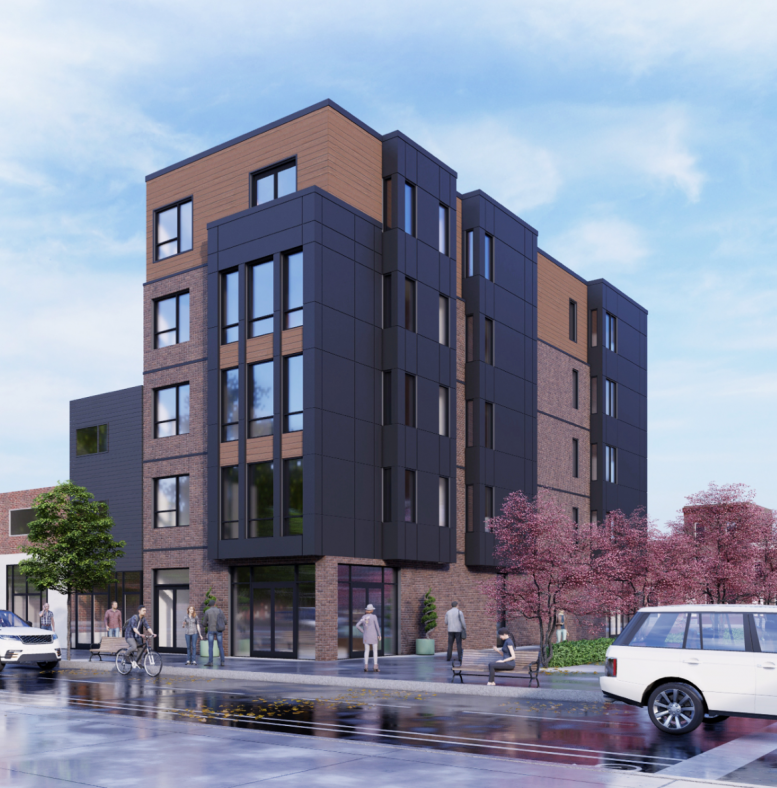 A recent site visit by Philadelphia YIMBY has revealed that construction is well underway at the Frankford Collective, a five-story mixed-use building at 1144 Frankford Avenue in Fishtown, Kensington. Designed by Kore Design Architecture, the project features ground-level commercial space and 12 apartments above, as well as elevator service, full sprinkling, and a roof deck that will offer dramatic views of the Northern Liberties skyline, which is rapidly rising nearby. Permits list the Frankford Collective as the owner, Equinox Management & Construction as the contractor, and a construction cost of $1.5 million. 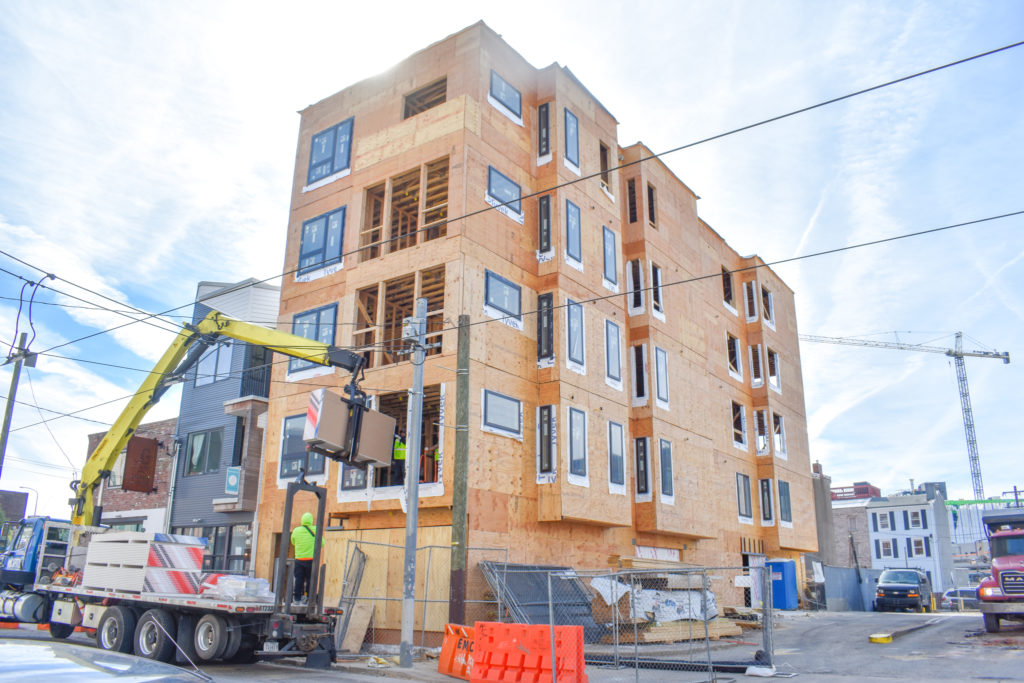 The building is a welcome addition to the neighborhood, given its density infusion, rigorous massing with projecting cantilevers, and a promising facade with a two-tone exterior and ample windows.

Aside from the commercial component, the exact nature of the development remains somewhat ambiguous. The Fishtown District website describes the project as holding “12 boutique hotel rooms,” while the Equinox site simply refers to the project as holding “12 units.” The latest permits describe building occupancy as “R-1 Residential (Transient),” which adds further confusion as R-1 typically alludes to residential construction while “transient” means “hotel” in zoning terminology. 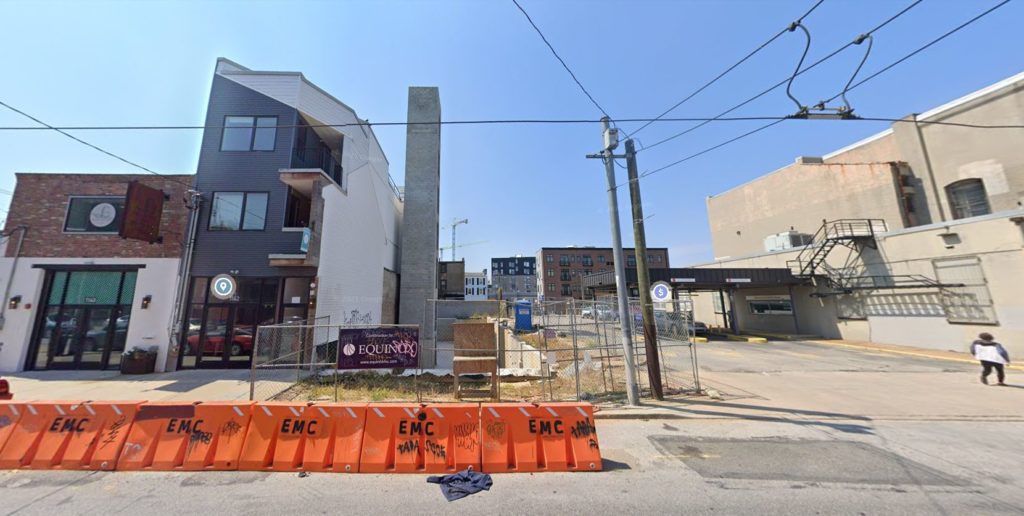 In either case, much progress has been made since we announced permit filing in December 2020. The foundation was completed and a CMU service core was constructed by August of last year. 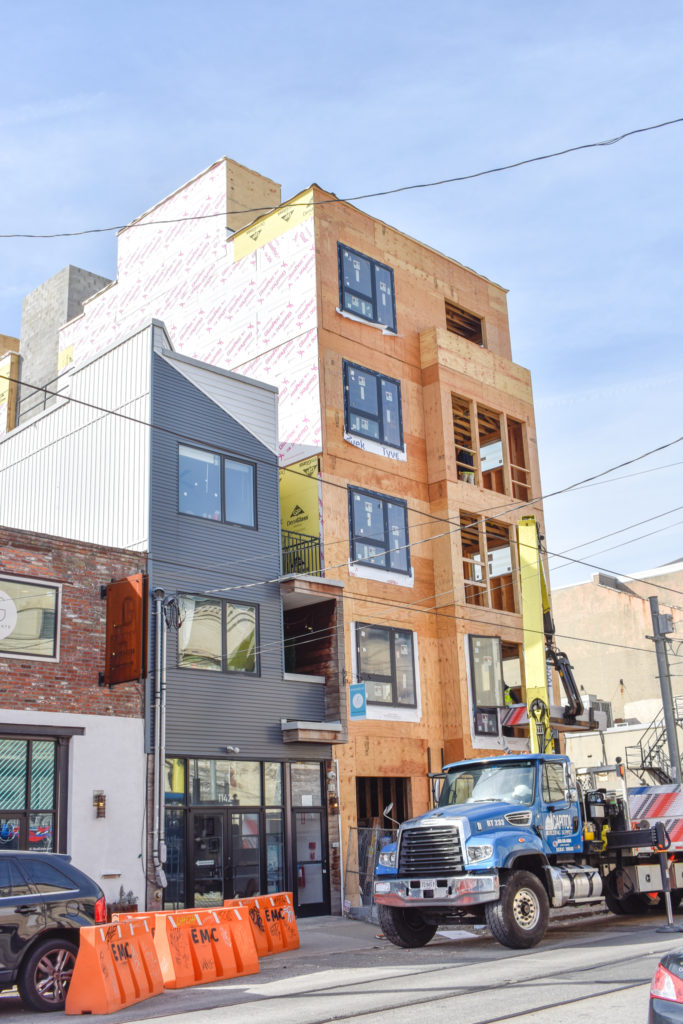 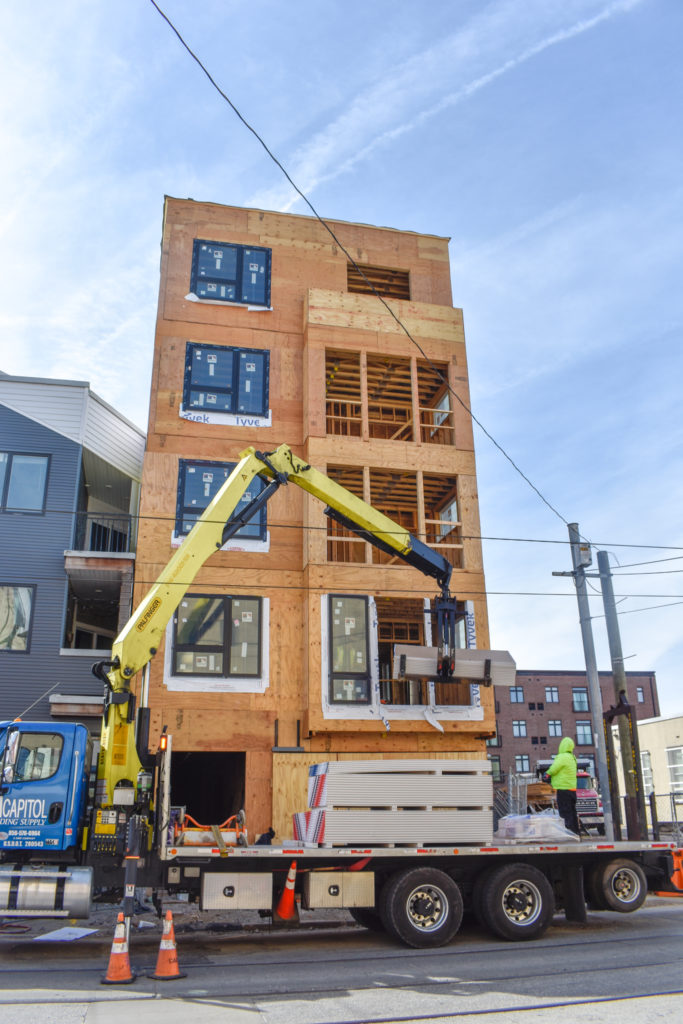 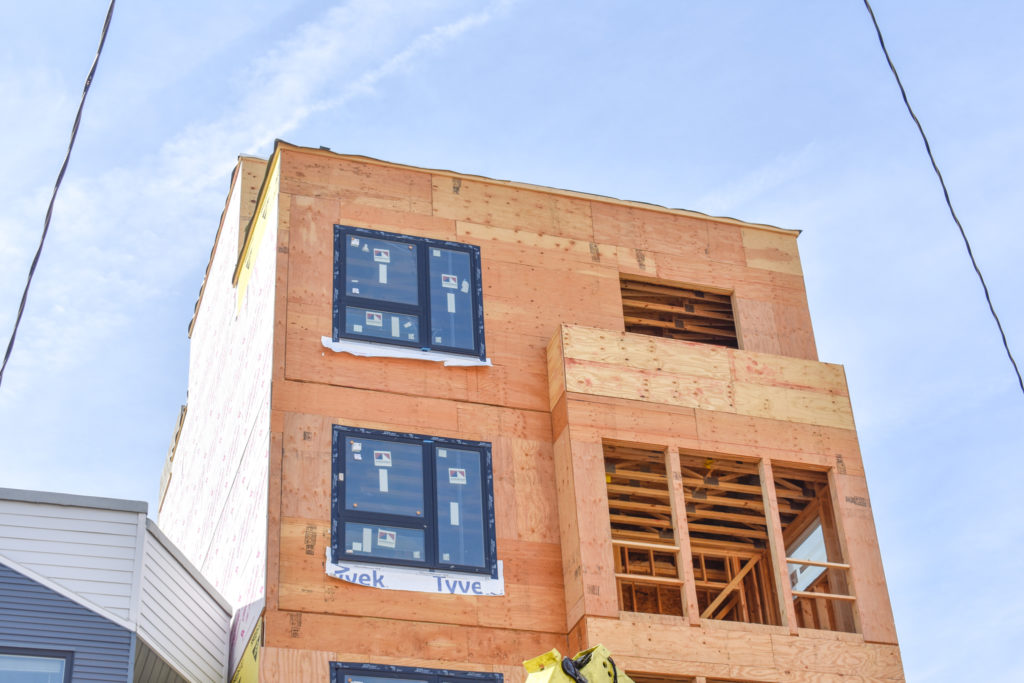 The rest of the structure rose over the following seven months, as our recent visit found the wood-framed structure standing assembled and windows have been partially installed, although exterior work has not yet begun. 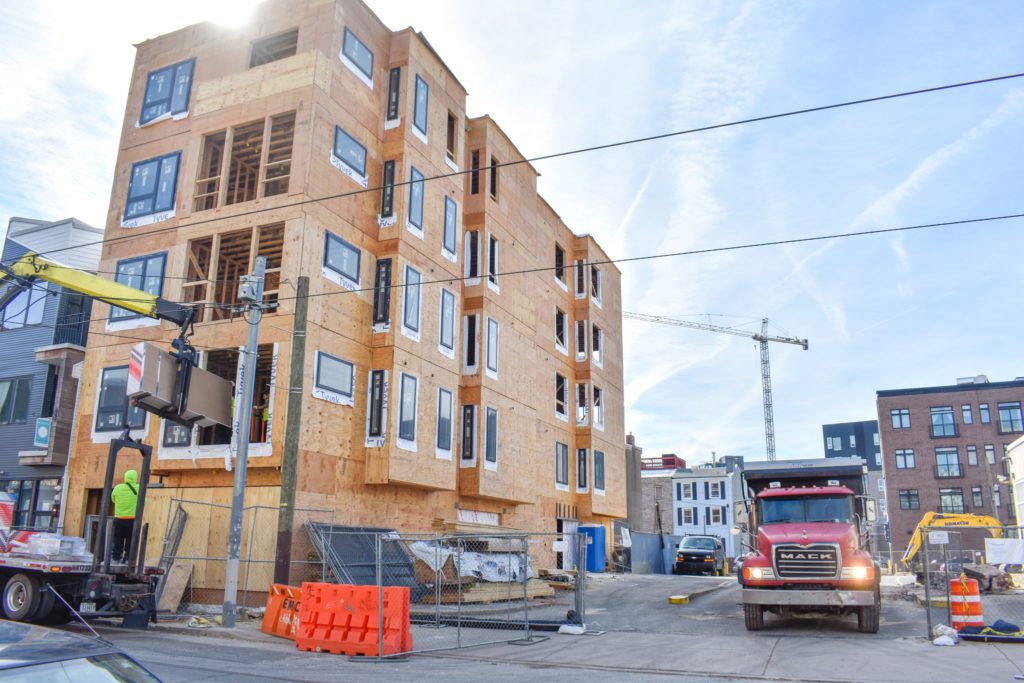 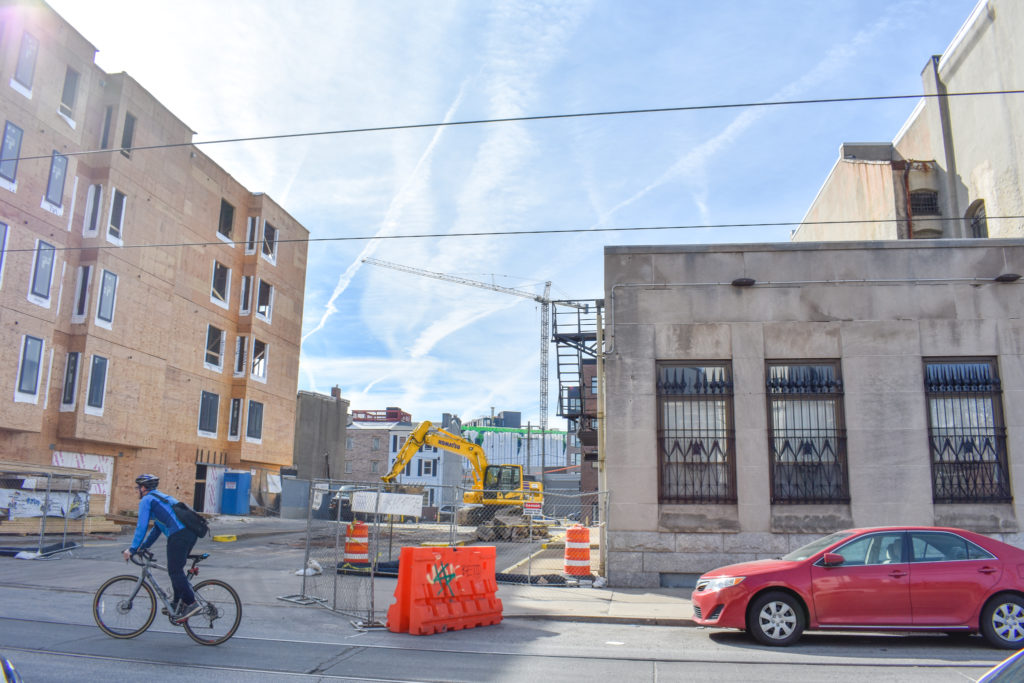 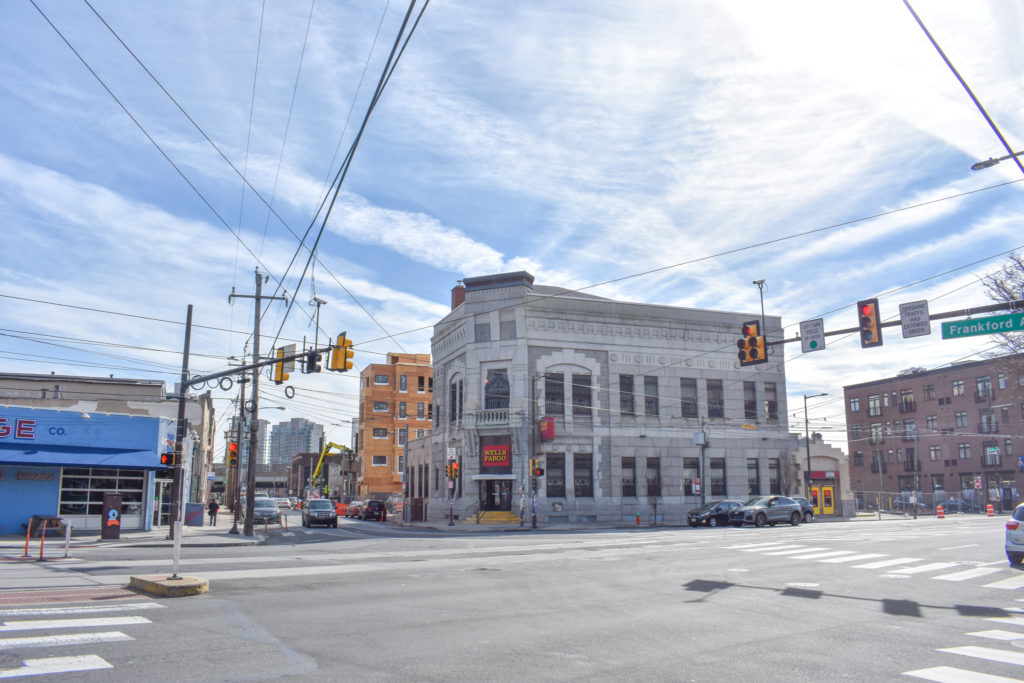 The Frankford Collective rises on on the west side of the block between West Wildey Street and Girard Avenue. Although the structure stands on a mid-block lot, it is notable for its setback from its northern boundary, which allows for windows on the northern exposure. This side of the building faces the mixed-use development proposed next door at 1148 Frankford Avenue, where a new five-story building will wrap around the renovated 19th-century Kensington National Bank.

The building at 1148 Frankford Avenue will also be set back from the shared lot line. As such, the two structures will form a sizable mid-block arcade; unfortunately, even though the ground-level retail space at the Frankford Collective opens onto the corridor, no such accommodation was made at 1148 Frankford Avenue, and, instead of creating a shared public-private through-block retail promenade similar to nearby Liberties Walk, a wall will separate the two alleys. 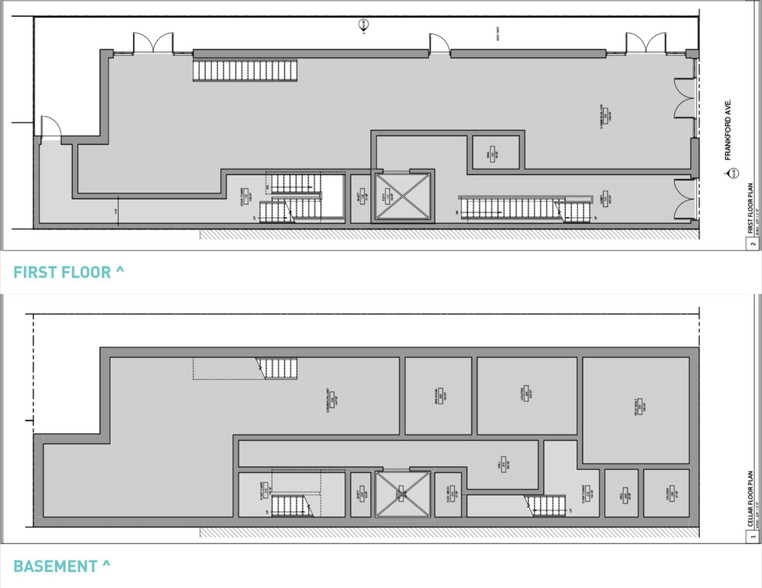 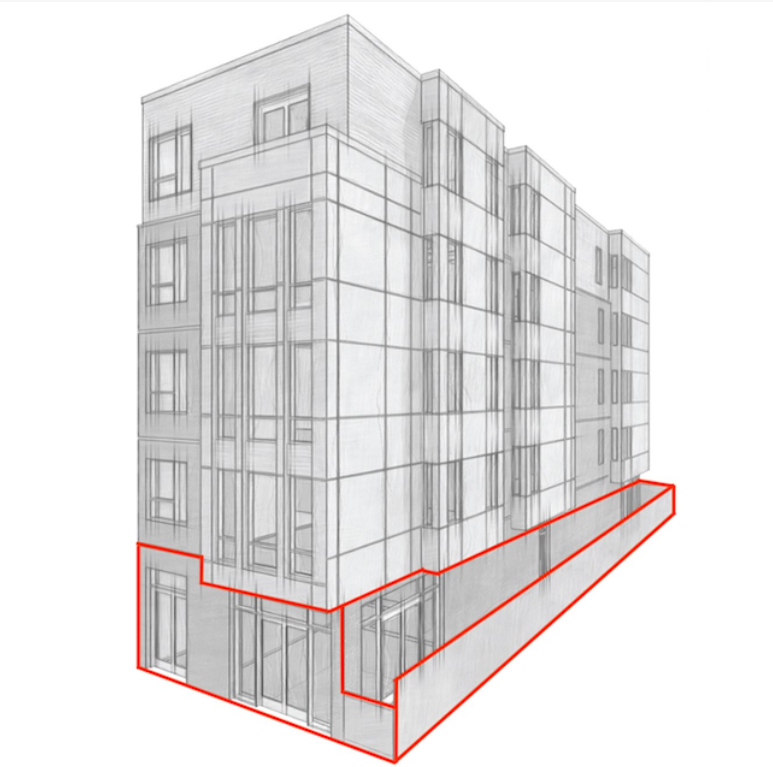 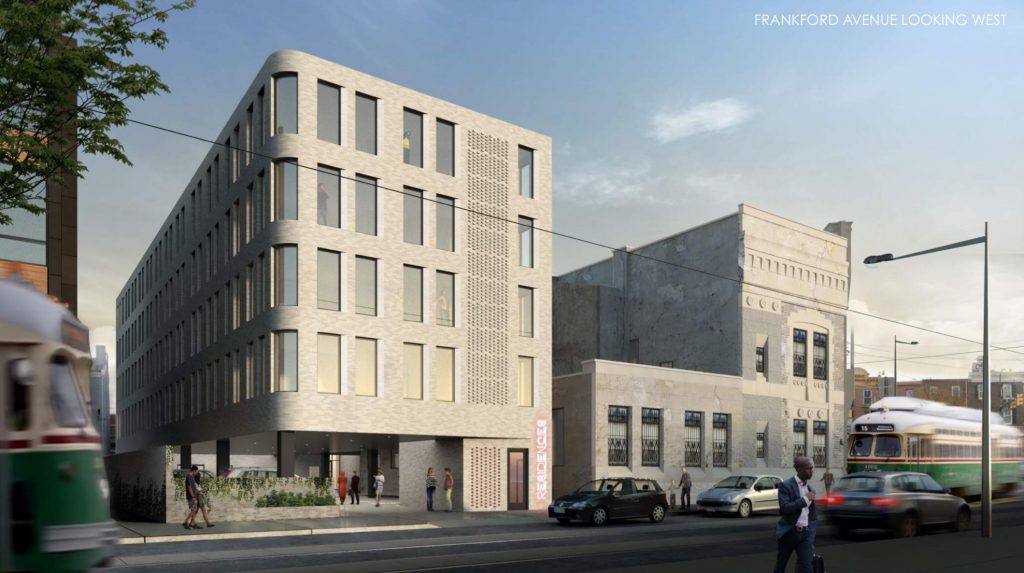 Note that YIMBY has suggested a similar promenade for The Frankford, a six-story, 150-unit mixed-use development proposed down the block to the south at 1120 Frankford Avenue, when we offered an alternate layout for the project with a taller building rising from a smaller footprint. Not only would such a layout allow for a through-block pedestrian arcade, but it would also preserve the iconic Fishtown cat mural.

We welcome the abundance of new development that is currently in progress in Fishtown and in adjacent Northern Liberties, yet, while the neighborhood is still developing, we urge the city to reconfigure local zoning to allow for more flexible design layouts, and call for greater cooperation between developers to create common public space. 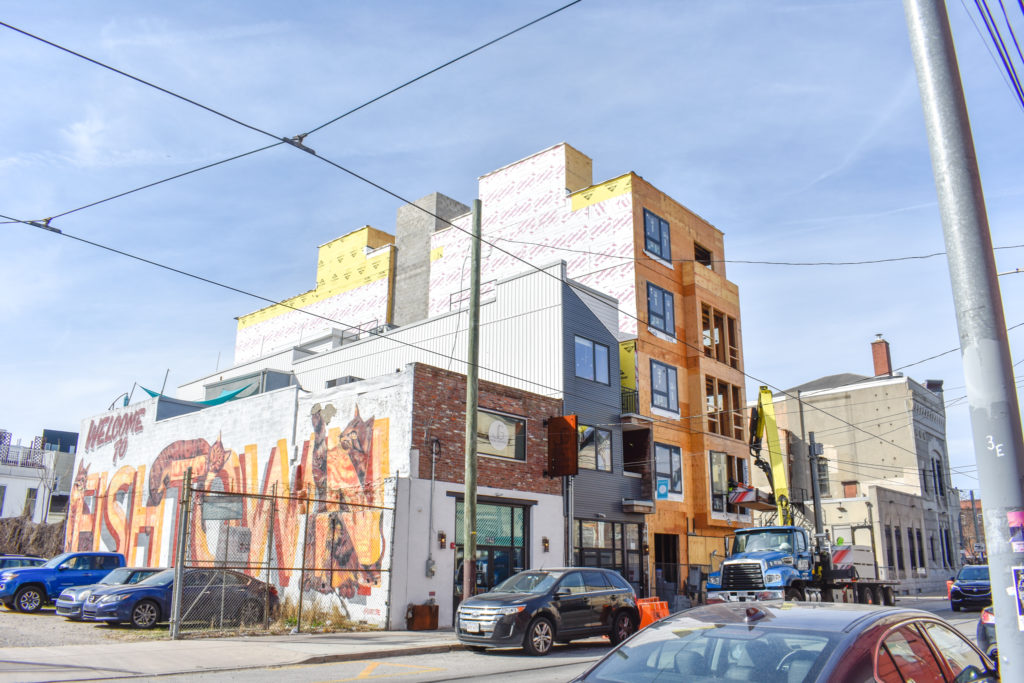