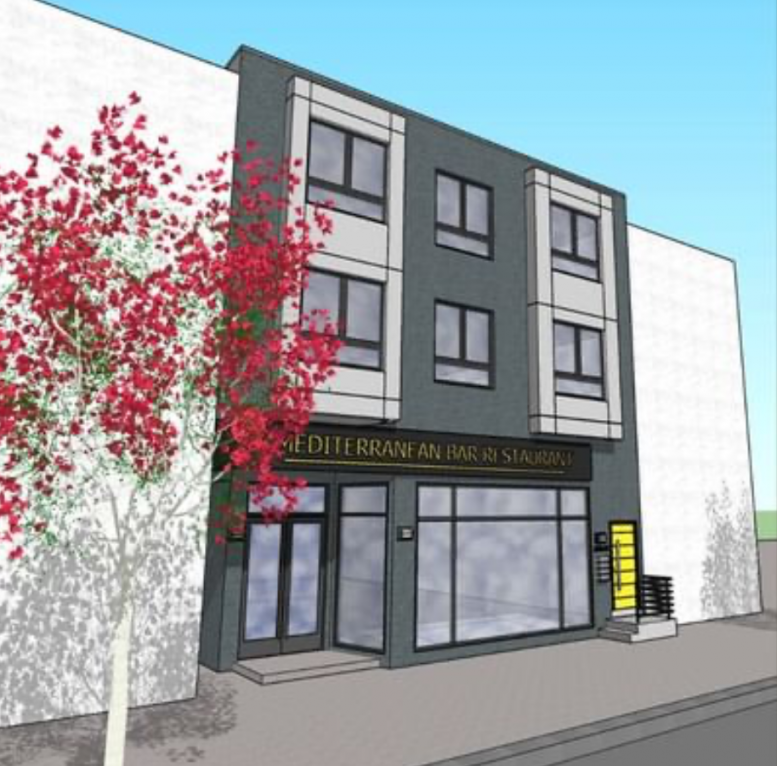 Judging by recent permit activity, demolition appears imminent at 2331-33 East York Street in Olde Richmond, Kensington, where a three-story rowhouse and an adjacent fenced-in lot are slated to be replaced by a three-story mixed-use building. The building will hold commercial space in the basement and at the first floor (which will house a restaurant, according to both permits and the rendering) and four residential units on the floors above. The 7,400-square-foot structure will feature full sprinkling and a roof deck, which, judging by the building’s height and lack of nearby obstructions, will offer decent views of the skyline. Permits list Plato Marinakos as the design professional, PASP LLC as the contractor, and a construction cost of $500,000. 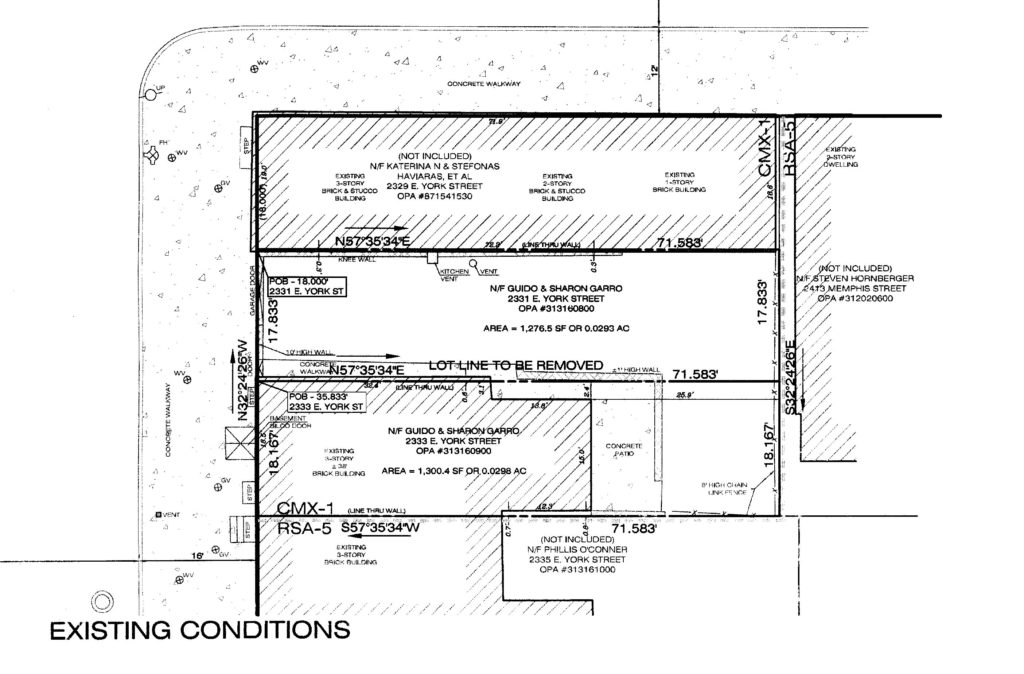 The lot, which combines two properties, sits on the northeast side of the avenue, just one house away from the intersection with Memphis Street. Generally, demolition of prewar rowhouses is an unwelcome prospect for the city’s rich yet increasingly threatened rowhouse heritage. Thankfully, not much of value will be lost at the site, which is currently occupied by a non-contextual rowhouse that is shorter in stature and plainer in style than its more refined neighbors. Moreover, we can outright say good riddance to removal of the eyesore next door, where the wall with the roll-down garage gate constitute a glaring break in the street wall.

The replacement building is rather prosaic (there is something about the design when the prettiest element of the rendering is the red-leafed tree on the sidewalk), yet it will offer definite improvement over existing site conditions. The building will fill the streetwall gap and nearly match the cornice line of its neighbors, while cantilevered projections provide formal interest to the composition. 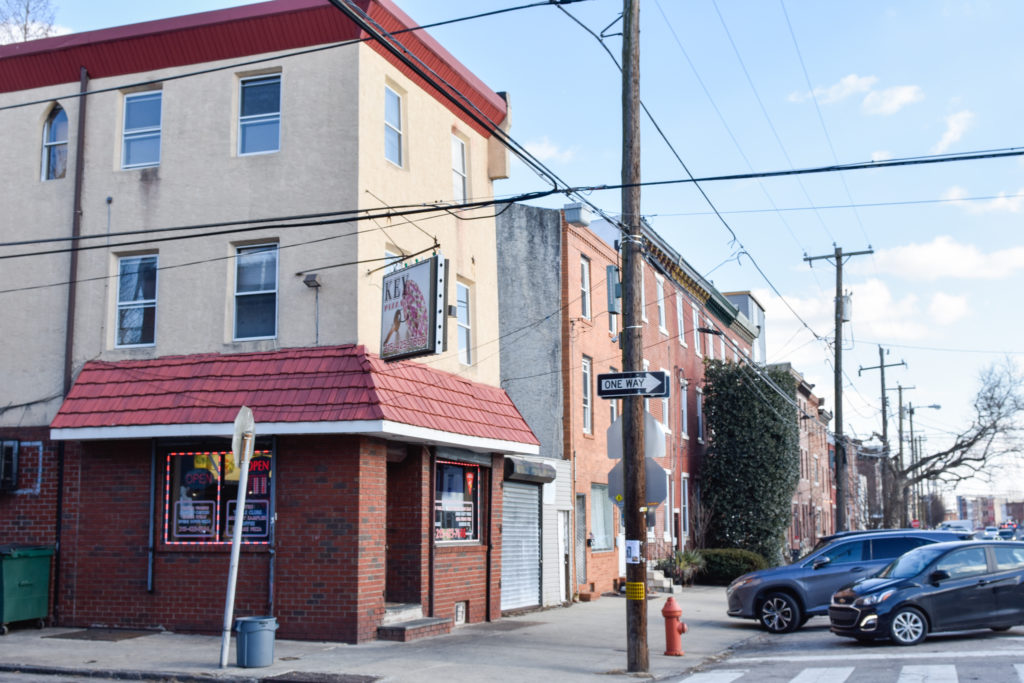 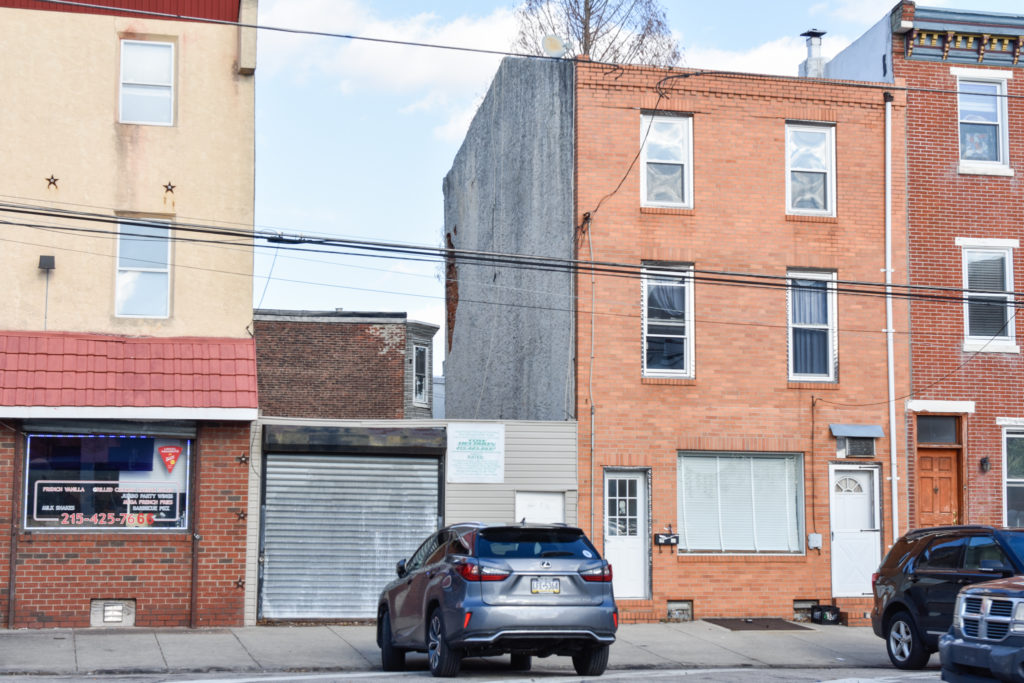 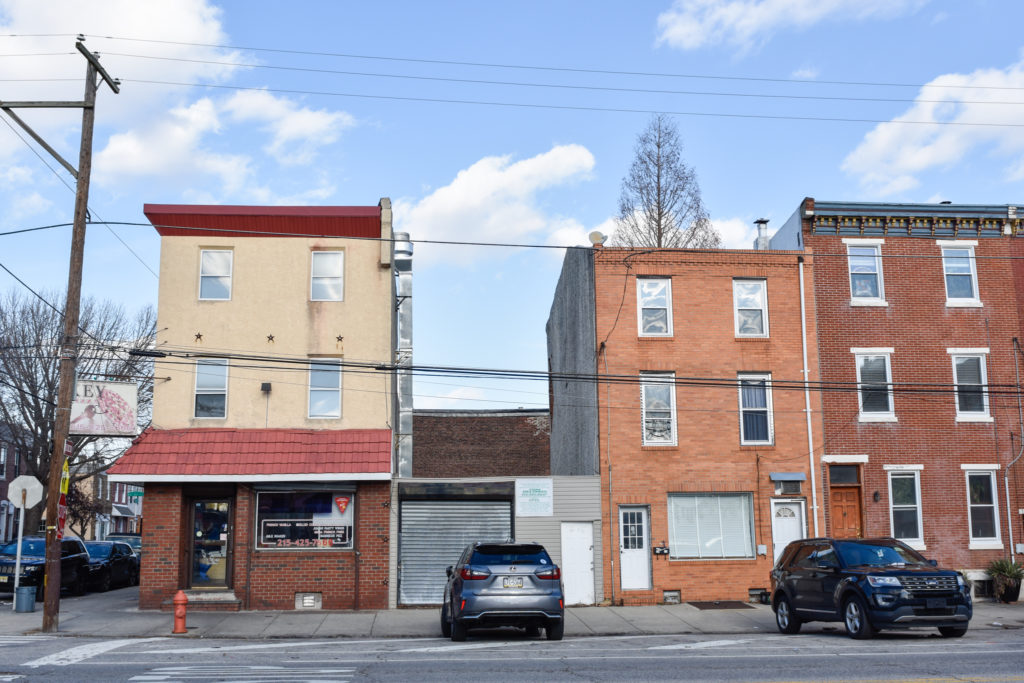 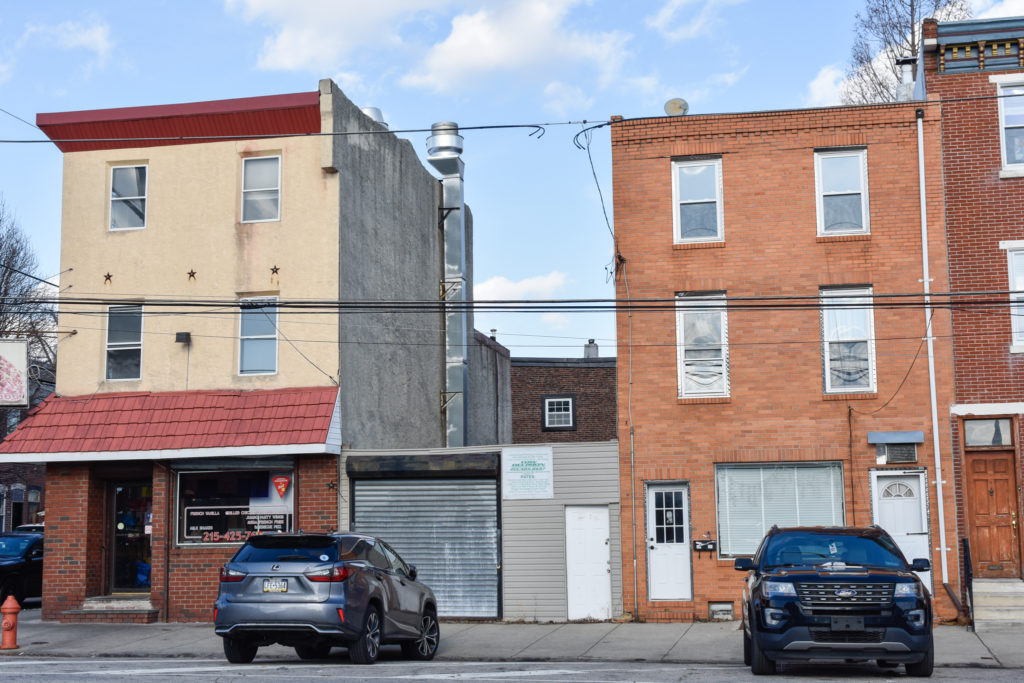 The development originally received demolition and construction permits last year, yet no work has taken place at the site since. However, another demolition permit has been issued last month, indicating that development is still in progress.

No matter how minor, any boost in local housing stock is a welcome prospect, yet arguably the proposal’s most exciting contribution is the ground-level retail space, which the rendering, with intriguing specificity, labels as a “Mediterranean Bar Restaurant.” A floor-to-ceiling storefront window will create a welcoming pedestrian atmosphere, and the eatery will contribute to the pair of restaurants that sit on either side of the intersection.

The residential entrance will be situated discreetly off to the side. Despite the extreme simplicity of the rendering, there is a certain charm that the designer took the care not only to color the door in a cheerful bright yellow tone, but also to render all of the four mailboxes that the structure would necessitate.

East York Street marks the what is frequently considered to be the eastern boundary of Olde Richmond. As such, depending on the definition, the structure’s location may be classified as Fishtown. The proposal at 2331-33 East York Street is situated within a roughly ten-minute walk to both the Berks Station on the Market-Frankford Line to the west and the route 15 trolley to the east.

While Fishtown has long been a construction hotspot, in recent years new development has been spreading increasingly to Olde Richmond. A few years ago, the nine-unit, mesh-clad Arbor House apartment building went up catty-corner across the intersection at 2324 Memphis Street. Two more multi-unit apartment buildings are currently under construction a few blocks to the northwest at 2400 Frankford Avenue and 2401 Frankford Avenue, both situated next to a recently constructed roundabout. 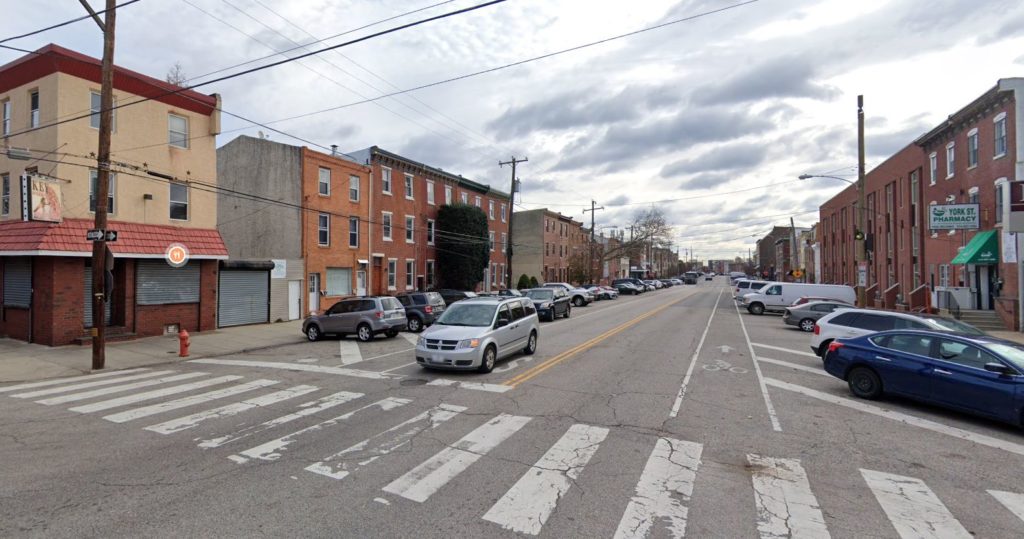 Olde Richmond is a well-established neighborhood with ample preservation-worthy rowhouse stock, yet it still offers a significant number of development-ready properties. The greatest improvement we would like to see in the vicinity is that along the extra-wise East York Street, where unprotected bike lanes and 90-degree parking ought to be converted into protected bike lanes with parallel parking. In addition, the street is wide enough to accommodate an expanded, tree-lined sidewalk.

Be the first to comment on "Demolition Imminent at 2331-33 East York Street in Olde Richmond, Kensington"