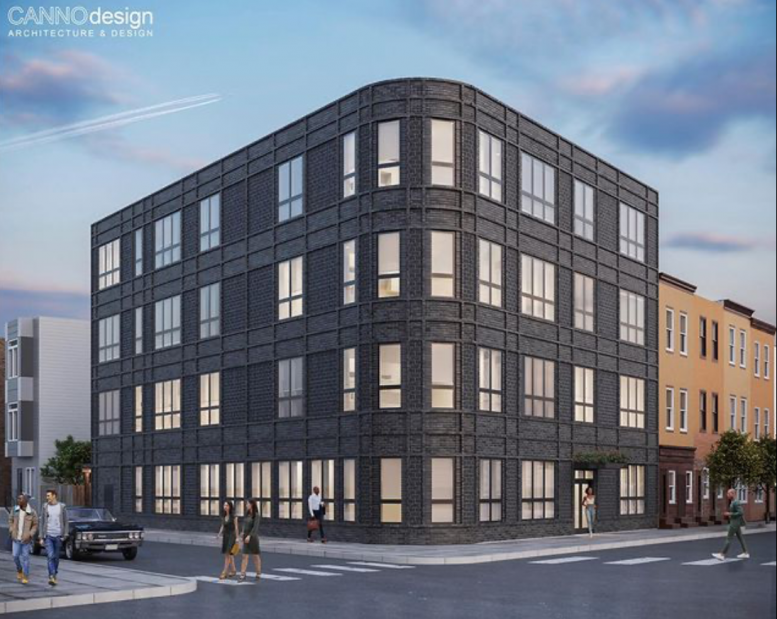 A recent site visit by Philadelphia YIMBY found construction work well underway at a four-story mixed-use building at 2400 Frankford Avenue in Fishtown, Kensington. The structure is rising at the angled northern corner of the three-way intersection between Frankford Avenue, Trenton Avenue, and East York Street, where a traffic circle was recently constructed. Designed by CANNOdesign and developed by Khosla Properties, the structure will span 17,972 square feet and hold 2,459 square feet of retail space and 15 apartments. Features include full sprinkling, a green roof, and parking for five bicycles. Permits list Tester Construction Group as the contractor and a construction cost of $2.6 million. 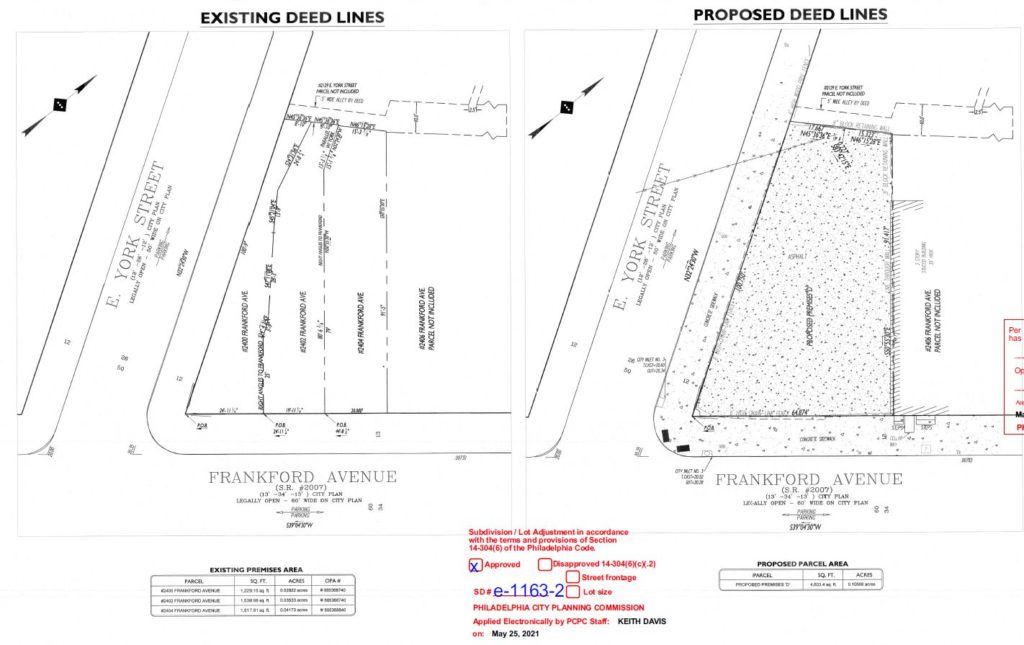 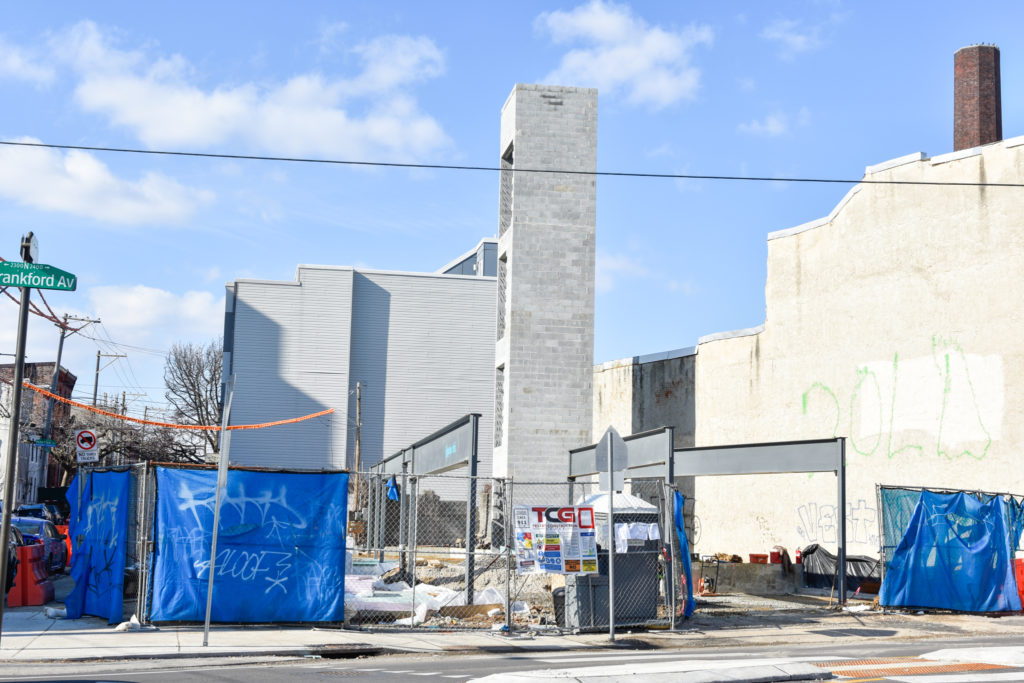 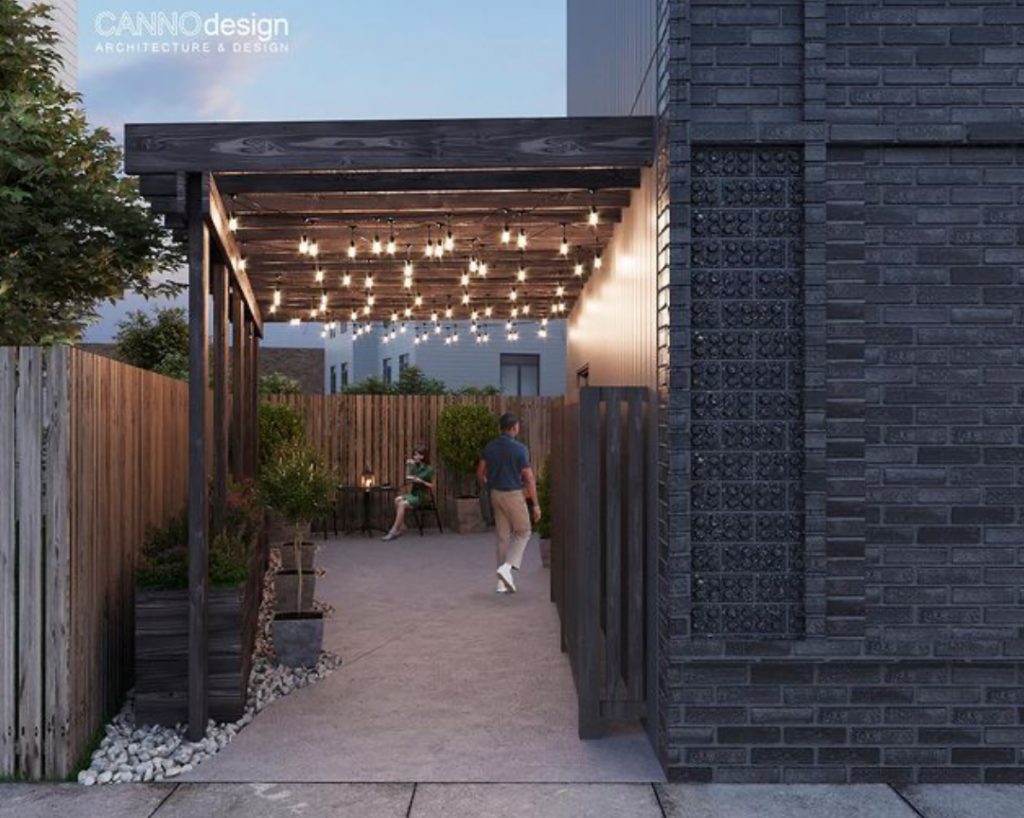 Renderings show an understated yet attractive exterior sporting two varieties of dark gray brick, clad as a grid enclosing large windows and coffered sections. A cozy, trellis-topped walkway leads to a rear resident courtyard from York Street. The most salient feature of the design, however, is the rounded corner facing the intersection.

The latter feature is notable not only in its own right, but also for its surprisingly contextual fit to its rapidly changing surroundings. Last year, the complicated interchange was retrofitted as a roundabout, a road feature proven to increase safety at irregular intersections. According to the City of Philadelphia, roundabouts “have a proven safety benefit over signalized intersections with lower vehicle speeds, less delay, less conflict points, and a reduction in air pollution due to less idling time. When compared to traditional signalized or stop-controlled intersections, roundabouts have been shown to significantly reduce severe and fatal crashes with a 100% reduction in fatalities found in Pennsylvania for signalized intersections converted to roundabouts.” 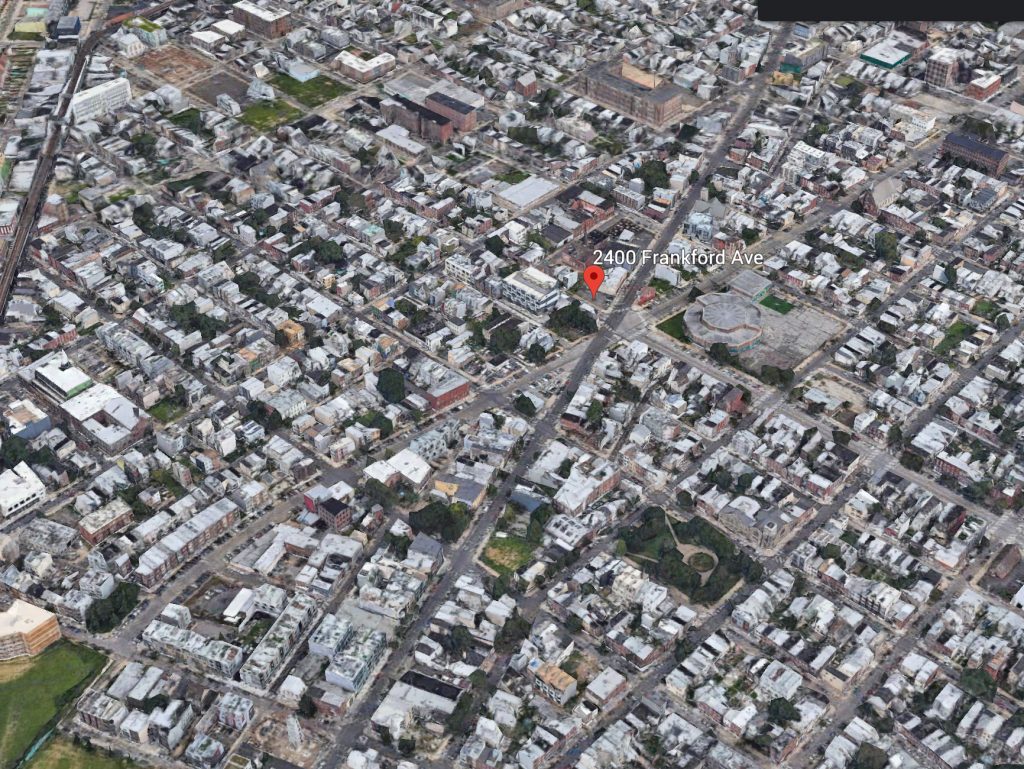 Though the roundabout is a novel road feature for Kensington, it displays synergy with the adjacent Horatio B. Hackett School, located on the east side of the intersection. Moreover, another rounded feature has recently arrived at the intersection’s northeast corner, where a four-story, 15-unit mixed-use building is under construction is rising from a sharply angled site across the street to the east at 2401 Frankford Avenue.

As such, the development at 2400 Frankford Avenue will form the fourth circular design element at the intersection, contributing to a unique emerging aesthetic at a junction long known for its sharp angles. 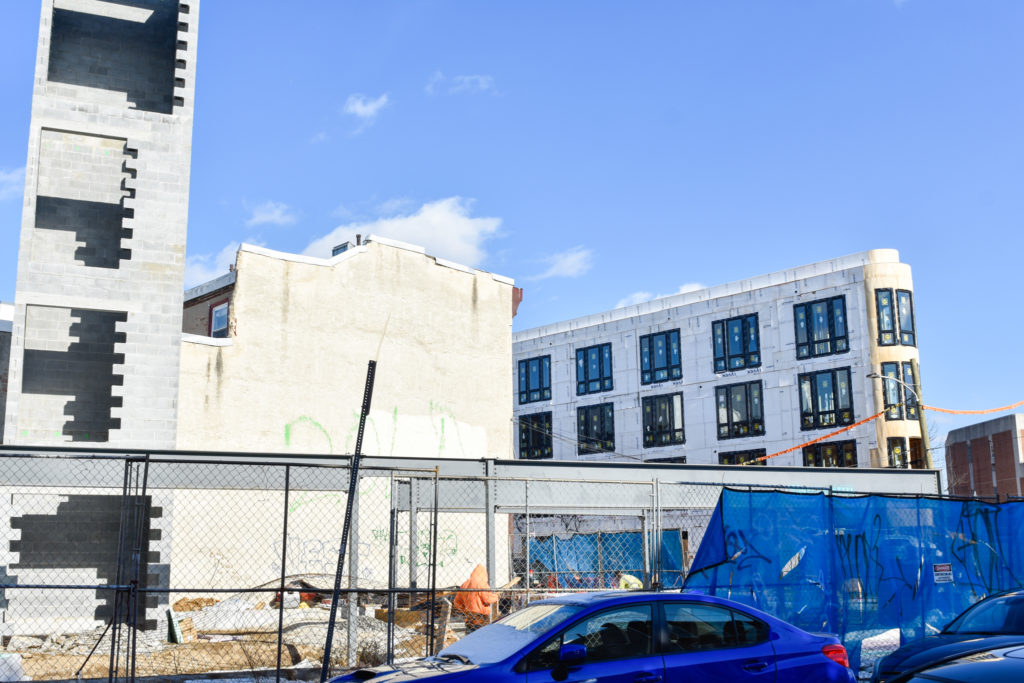 At this moment, however, work has not yet begin at this distinctive feature at 2400 Frankford Avenue. The most salient features constructed so far are the metal supports at the ground level and the full-height, CMU-clad building core. If the prominent, rectangular core is currently contextual with anything, it would be the orthagonal prewar chimney that towers just to the northwest of the site. 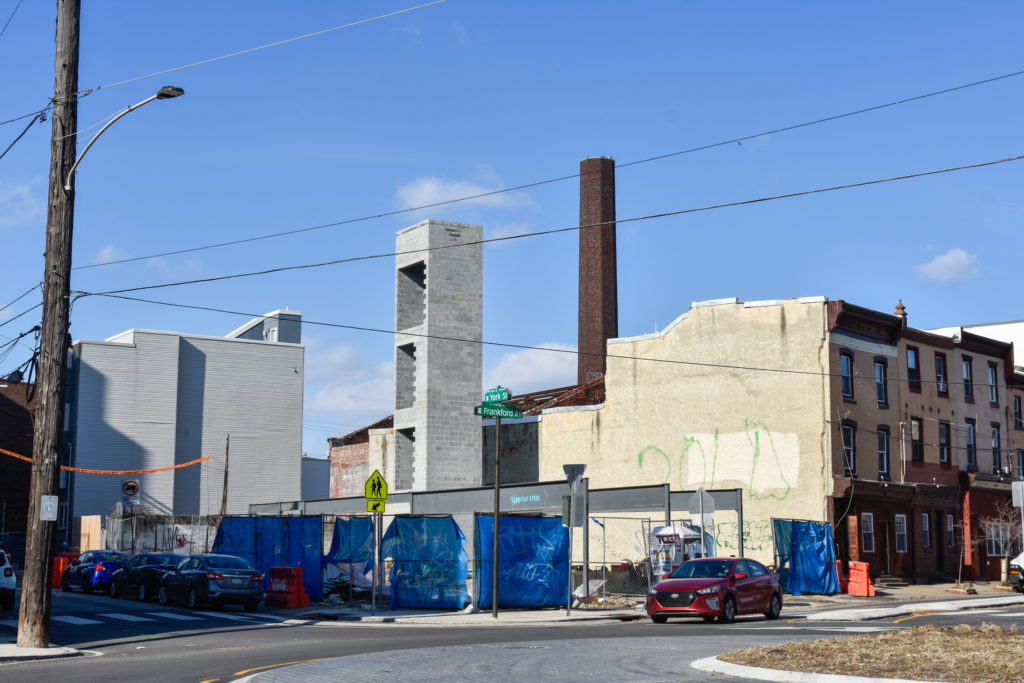 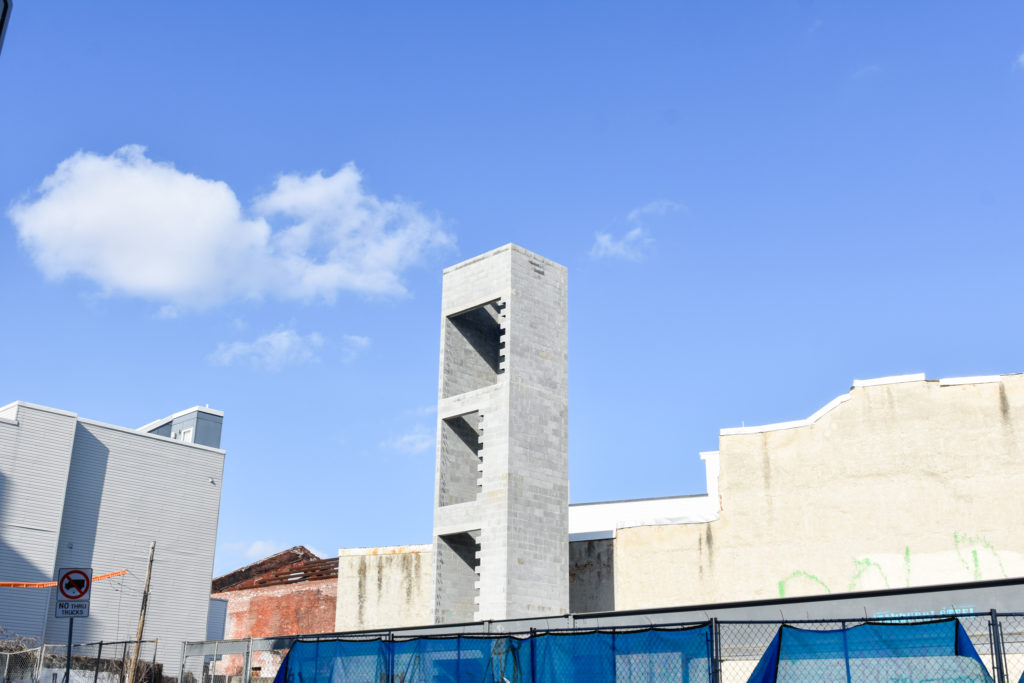 The development at 2400 Frankford Avenue is situated within a roughly eight-minute walk of both the Berks Station and the York-Dauphin Station on the Market-Frankford Line to the southwest and the northwest, respectively, as well as within a 15-minute walk of the route 15 trolley to the east. The area is in the midst of a long-running construction boom, with the five-story, 56-unit Metal Works Apartments recently completed down the block at 2120 East York Street (the building’s staggered checkerboard facade is visible in the photo below). 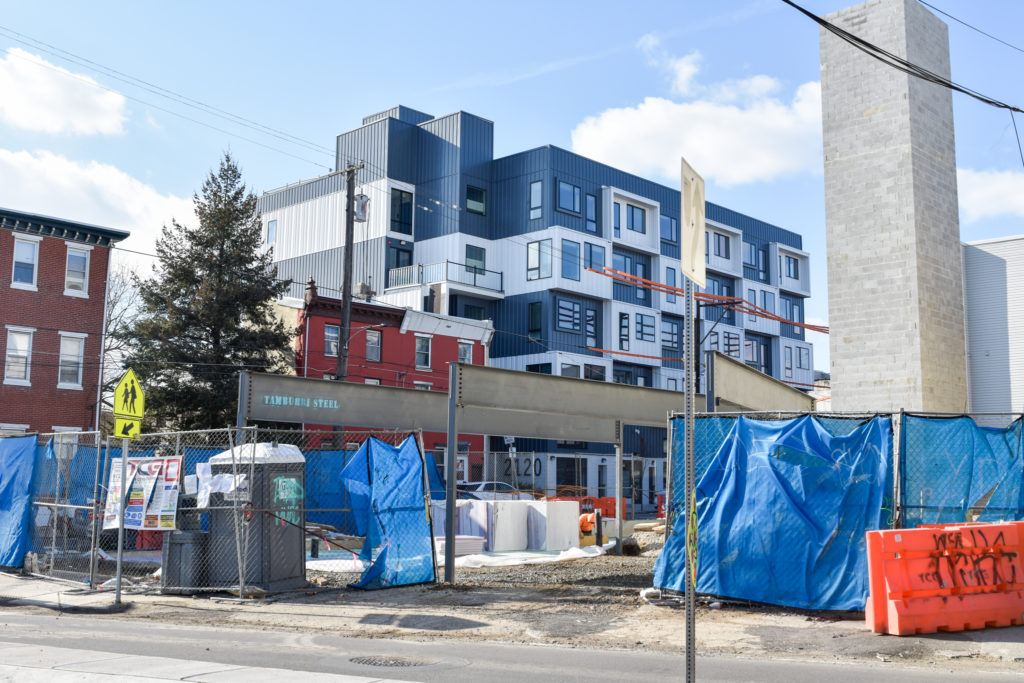 The development boom has done wonders from the long-distressed section of the neighborhood, breathing new life into a large volume of underused sites. One of such sites used to sit at 2400 Frankford Avenue, which housed a fenced-in, barbed-wire-wrapped parking lot for years prior. More construction news is sure to come from the immediate surroundings in the near, including, possibly, some of the remaining vacant sites adjacent to the roundabout. 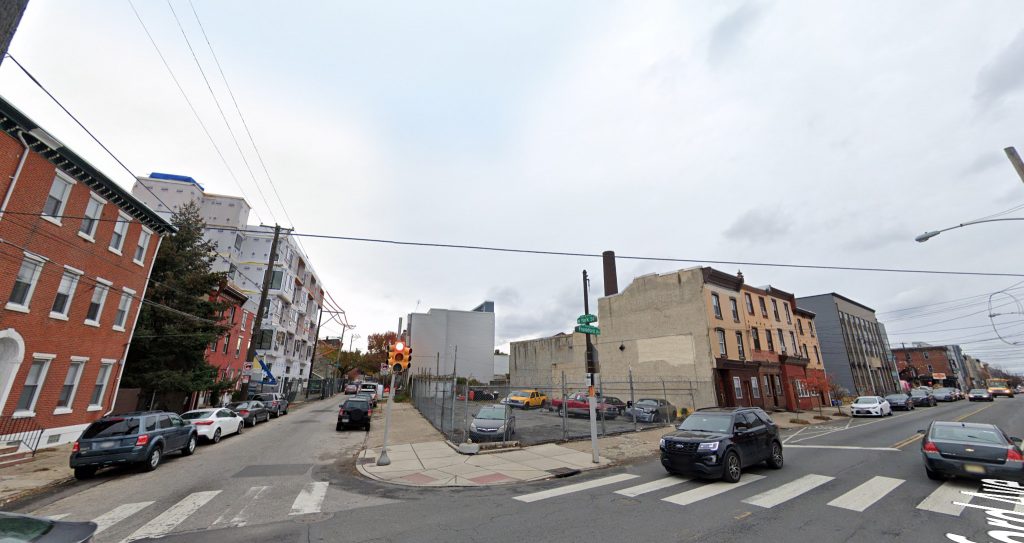 Be the first to comment on "Construction Underway at 2400 Frankford Avenue in Fishtown, Kensington"