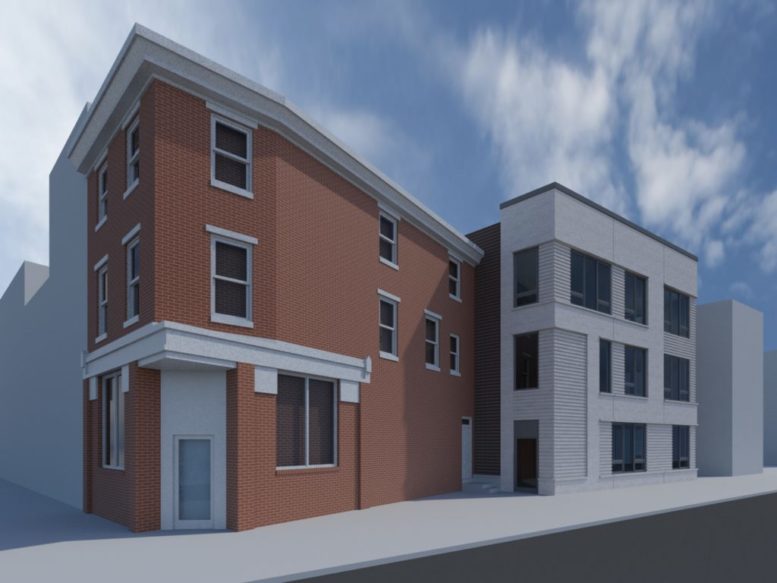 Philadelphia YIMBY’s recent site visit revealed that construction is crawling along at a snail’s pace, if it has not stalled outright, at a mixed-use development at 2301 Frankford Avenue in Fishtown, Kensington. Designed by Ian Smith Design Group, the project adds a three-story rear addition to a three-story prewar building and two smaller adjacent structures at the eastern corner of Frankford Avenue and East Dauphin Street. The finished structure will feature ground-floor commercial space and six residential units, as well as a cellar and full sprinkling. Permits list Black Oak Builders as the contractor and a construction cost of $312,000. 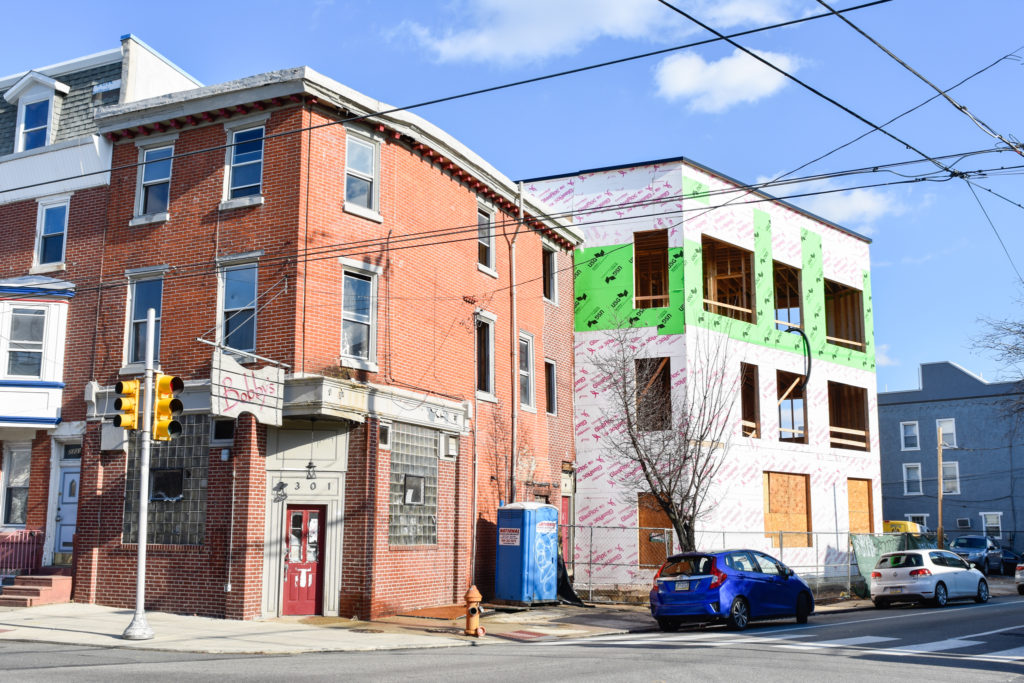 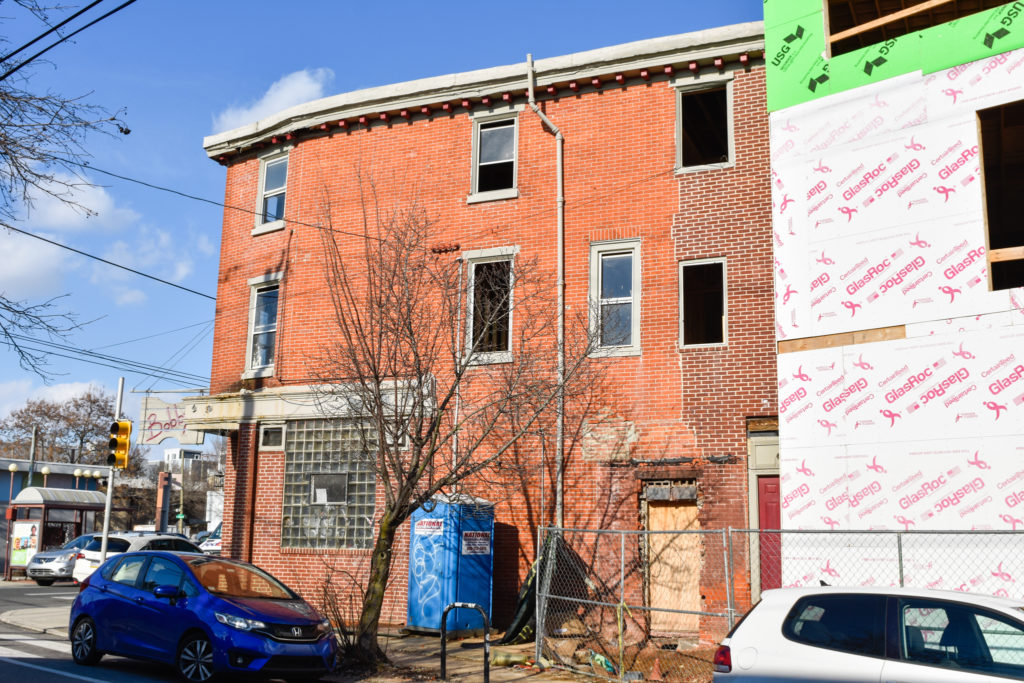 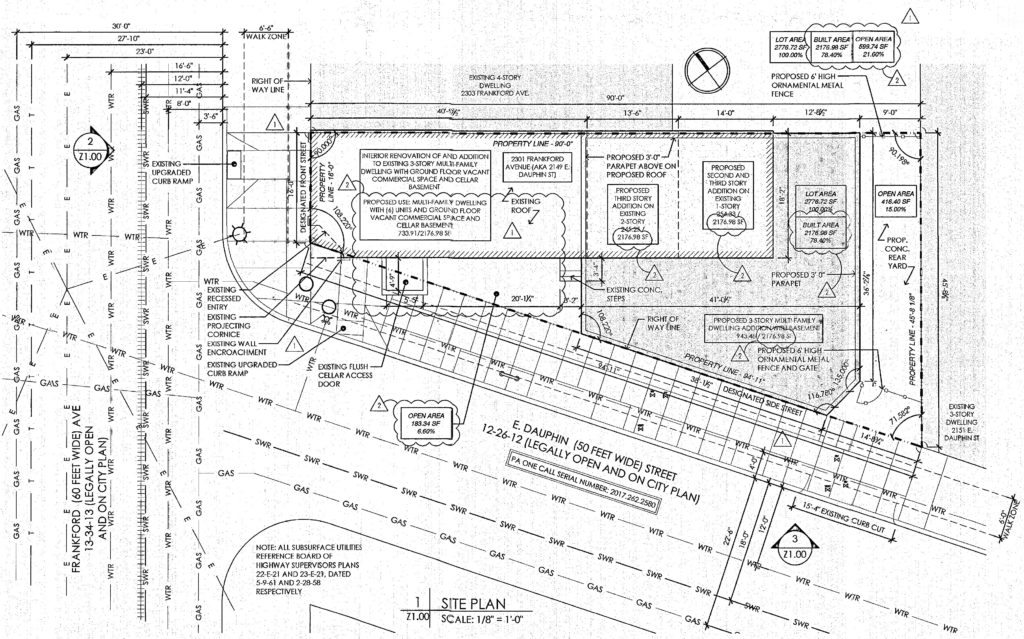 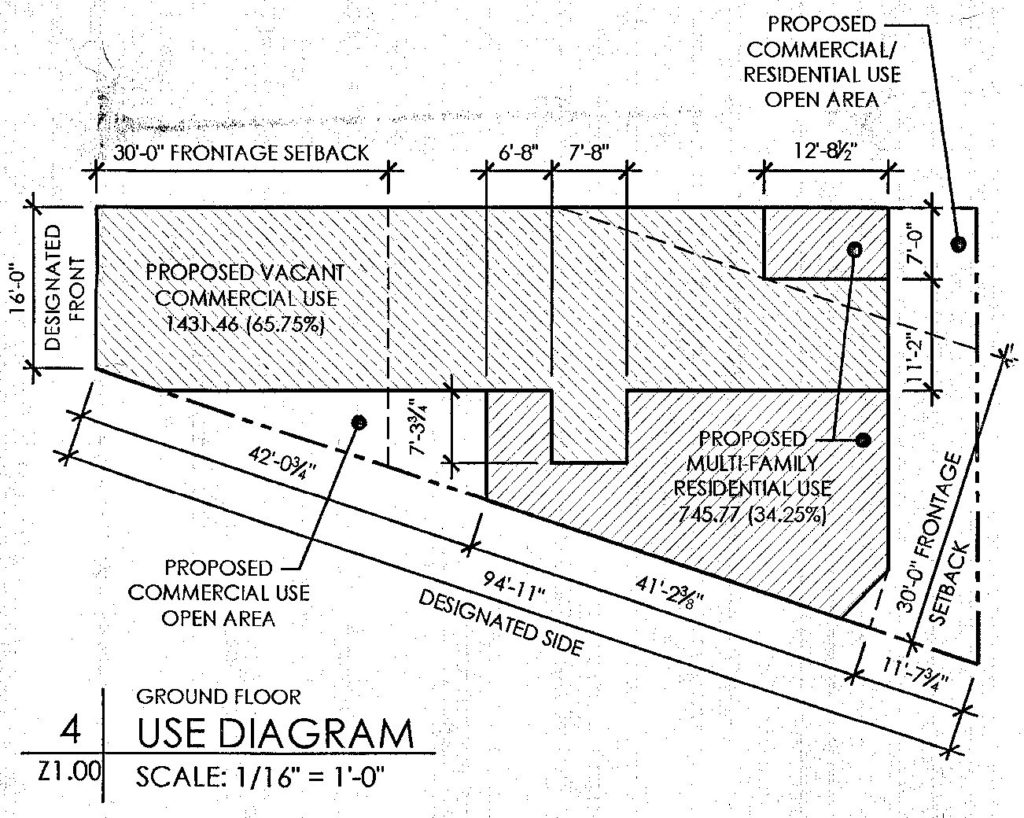 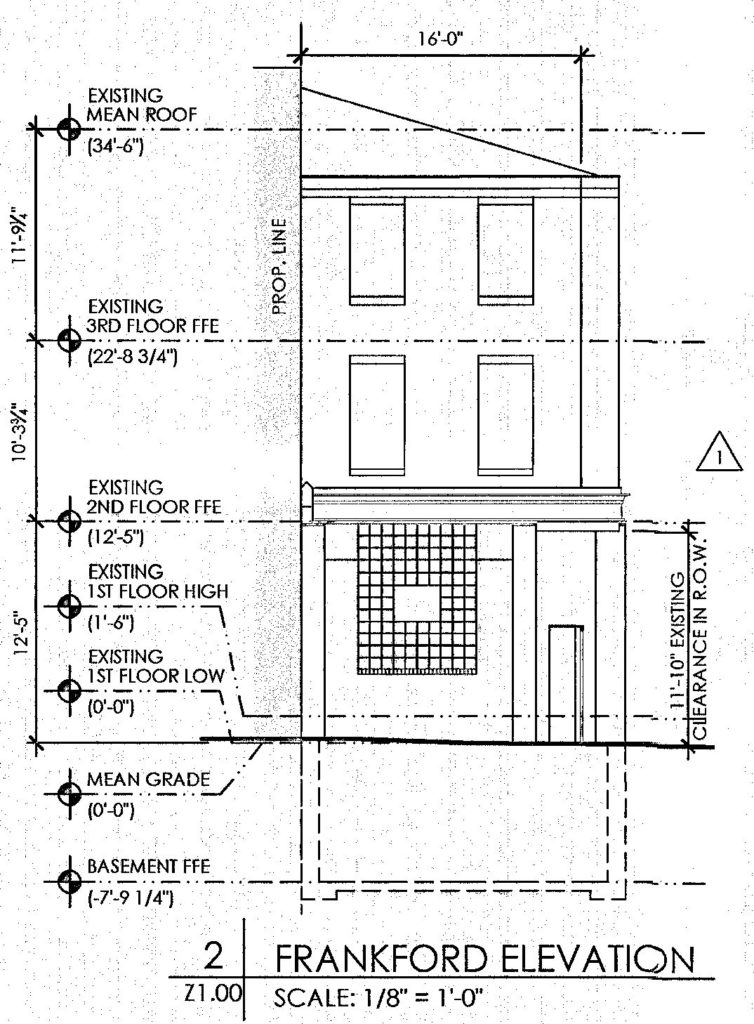 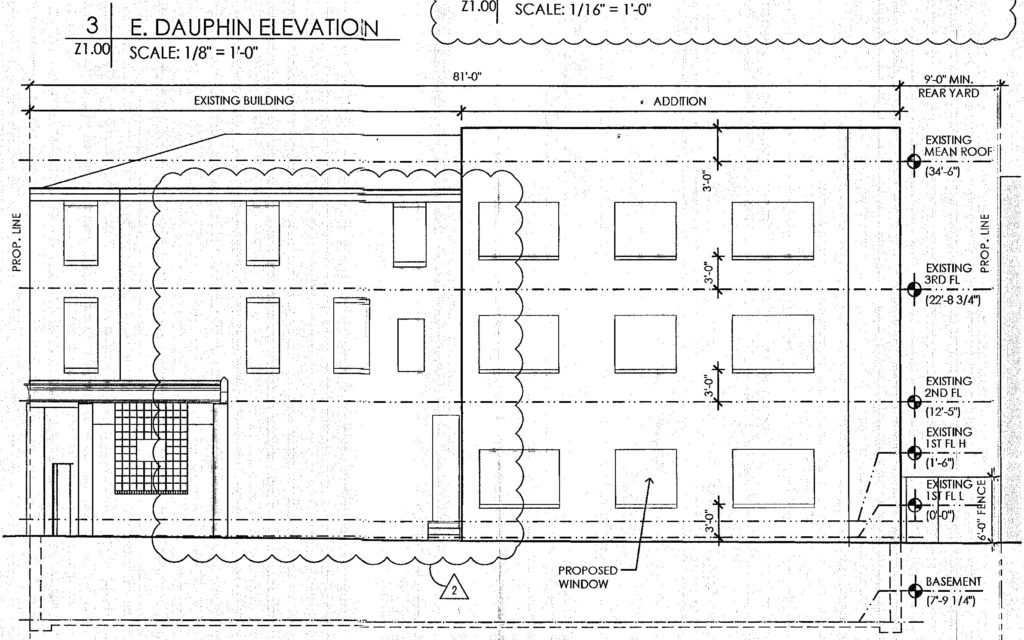 The new structure rises around 38 feet to the top of the parapet, a couple of feet higher than the peak of the roof of the original building. Construction involves a shallow concrete foundation and a light wooden frame superstructure. The three-story corner building will remain generally intact and will receive renovations, mostly at the interior. Notably, the single- and two-story rear wings were not demolished, but were instead incorporated into the three-story extension (thus qualifying the project for our “vertical extension” category). 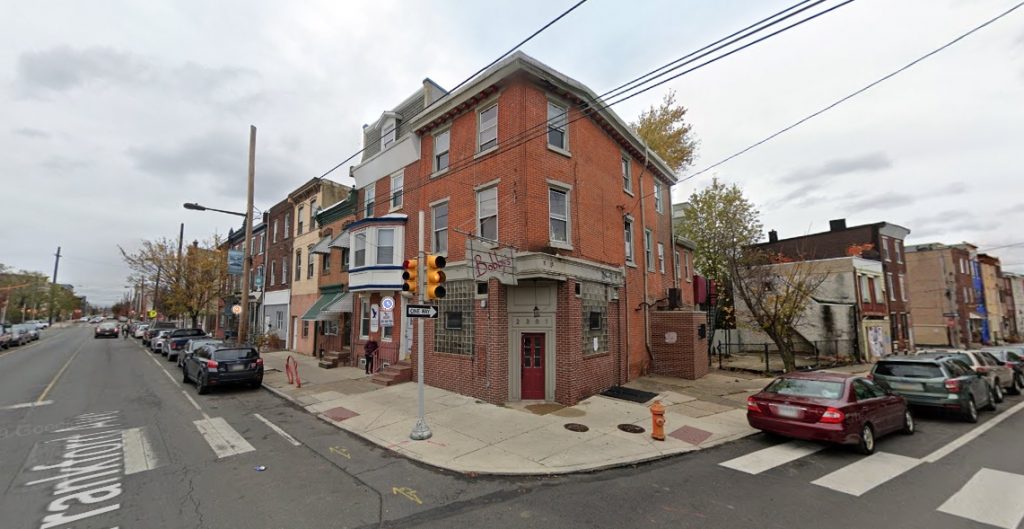 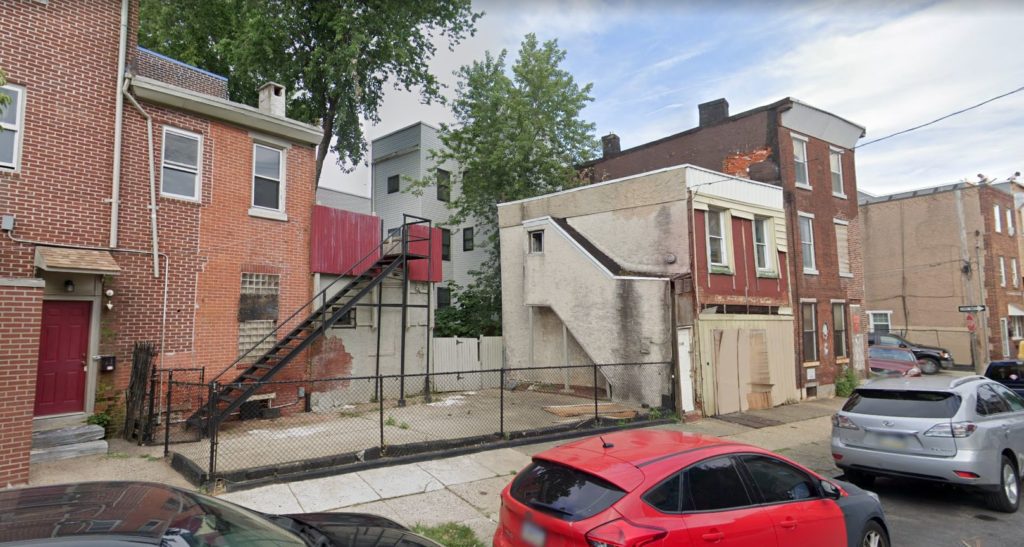 The only full demolition that took place is that of a two-story rowhouse at the eastern end of the site at Dauphin Street. Despite its old age and onetime status as a carriage house, the structure was in a dilapidated condition and was an unlikely candidate for preservation.

The rear wing and the carriage house offered minimal interest in terms of architecture, yet their arrangement around a vacant front yard and side stairs read as an interesting bit of historic construction. Still, the development team can be commended for doing minimal damage to existing historic structures as it utilizes mostly vacant land while preserving the most notable portion of the building at the site. Although the quixotic side yard is lost, the new wing will reinforce the streetwall and contribute much-needed contemporary housing to the neighborhood. 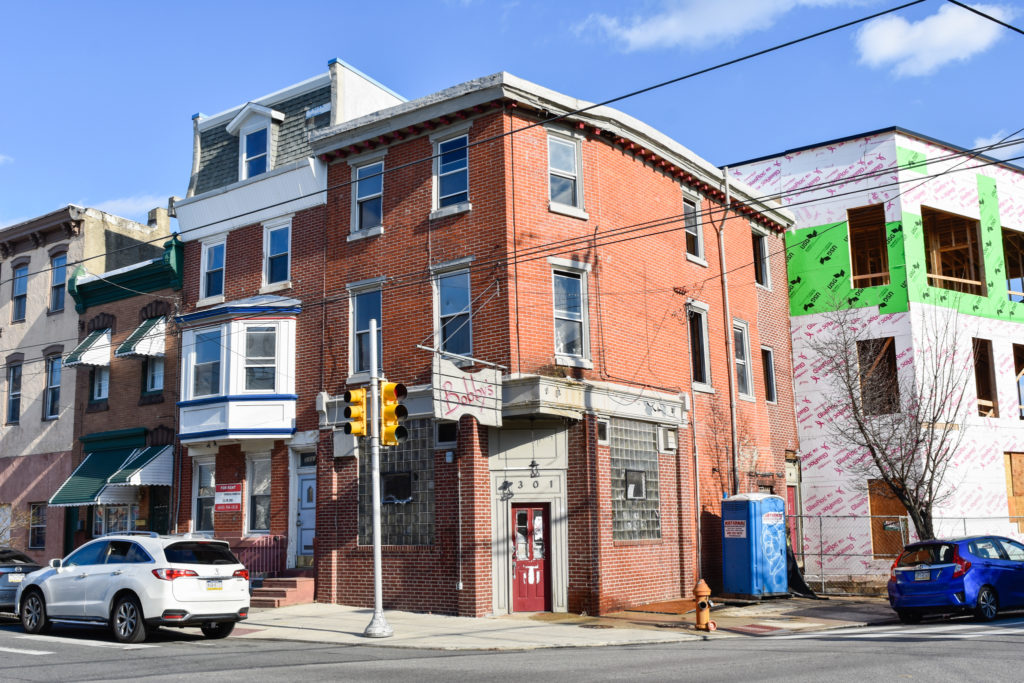 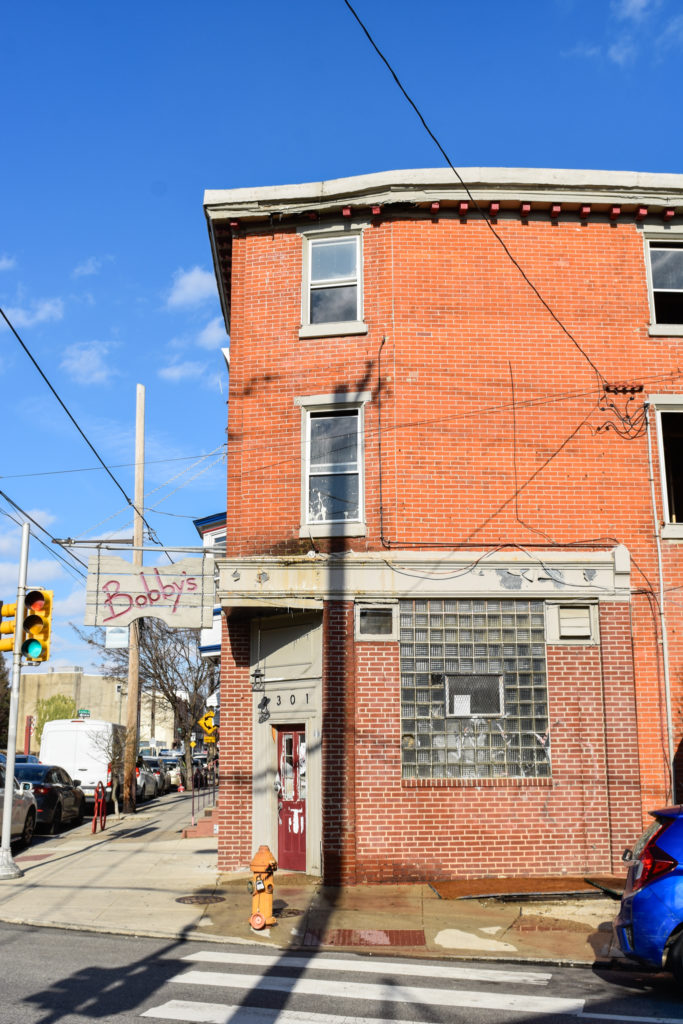 The project is notable for its unusually slow development progress. Although the rustic sign for Bobby Happy Hour Tavern still hangs at the corner, the once-beloved local watering hole closed around the early 2010’s. The property was sold in 2017 for $450,000, and the new project was unveiled the following year. The carriage house was demolished two years later in 2020. Construction was well underway by the end of last year. However, our latest site visit shows that virtually no visible construction progress has been made over the past four months, if not longer.

Despite the slow progress at 2301 Frankford Avenue, the advanced state of construction means that the building is all but guaranteed to be completed sooner or later. We look forward to the structure’s completion, as it will further contribute to the ongoing real estate boom along Frankford Avenue and in the surrounding area, which spans the confluence of the Fishtown, East Kensington, and Olde Richmond neighborhoods.