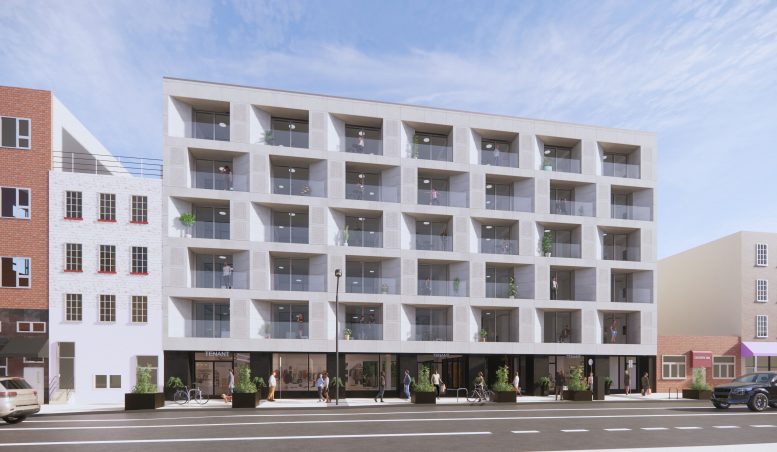 YIMBY recently introduced a six-story, 79-unit mixed-use proposal at 1106-14 Spring Garden Street (aka 1106 Spring Garden Street) in Callowhill, Lower North Philadelphia. Designed by Varenhorst, the building will offer an appealing design, street-energizing retail, much-needed public space, and a large number of apartments. However, the proposal also involves the demolition of a stately prewar building, which has recently been torn down. Today we look at the demolished structure and analyze strategies for how it could have been preserved and incorporated into the design without sacrificing any of its current strong points. 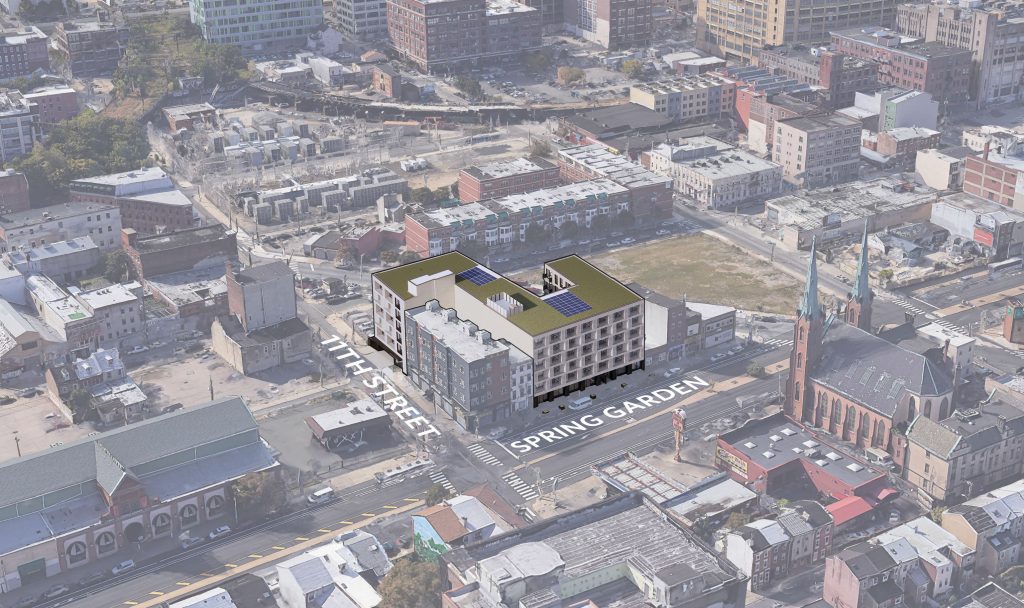 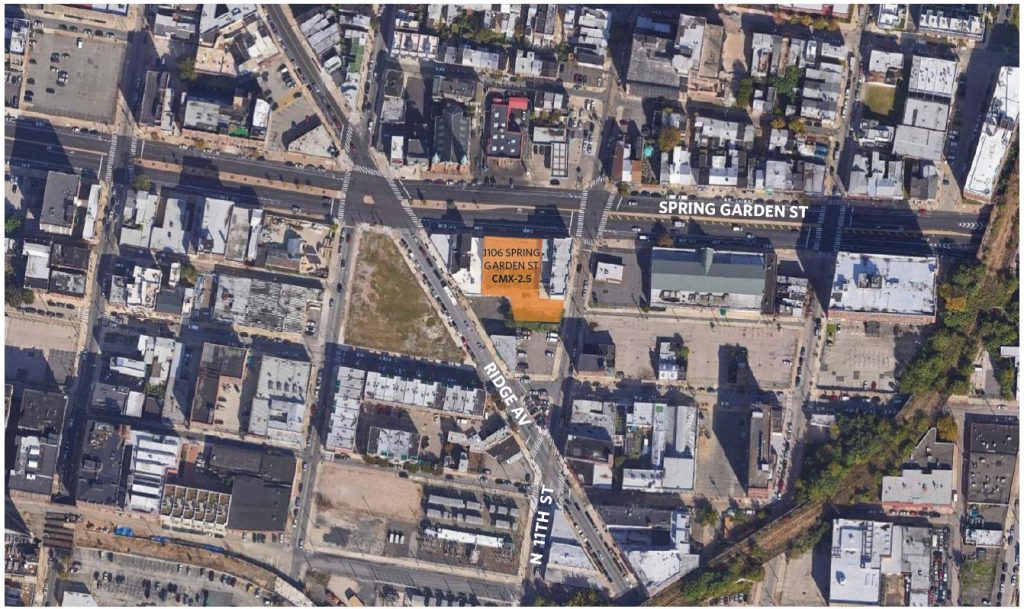 Spring Garden Street east of Broad Street boasts a number of magnificent buildings large and small, including the shuttered Church of the Assumption at 1123 Spring Garden Street, across the street from the proposal covered in this article, and the Romanesque school-to-loft conversion at Mural Lofts at 523 North Broad Street a block and a half to the west.

However, much of Spring Garden Street’s once cohesive streetscape has been gutted during the neighborhood’s long postwar decline after numerous industrial companies left the area. Today, magnificent prewar beauties share the street with parking lots, gas stations, car washes, and warehouses.

One of such beauties previously graced the site at 1106 Spring Garden Street. The two-story prewar building spanned around 100 feet in length, the lot’s entire Spring Garden Street frontage, and extended around 50 feet deep into the lot, and would have been an excellent candidate for renovation and incorporation into the design. 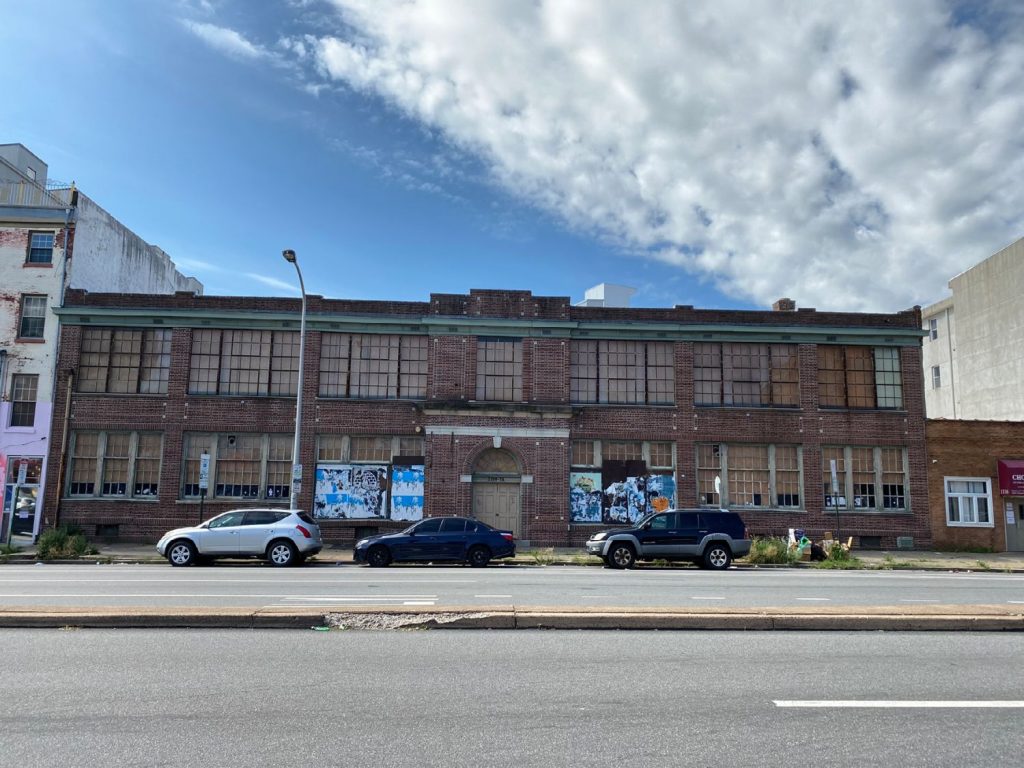 The building’s roughly 15-foot-high ceilings and tall, broad, paneled loft-style windows would have offered the type of space that is still in high demand for commercial and institutional tenants alike. The symmetrical, well-proportioned, red-brick facade accented with off-white stone detailing and a green cornice, made for a grand, stately presence on the street.

The arched entryway, capped with a large fanlight window, would have made for a fine entrance for commercial or residential tenants alike. If the ground floor were to be segmented into smaller commercial spaces, additional entryways could have been added to the facade, a minor sacrifice of the original building’s architectural integrity if it led to the building’s preservation. 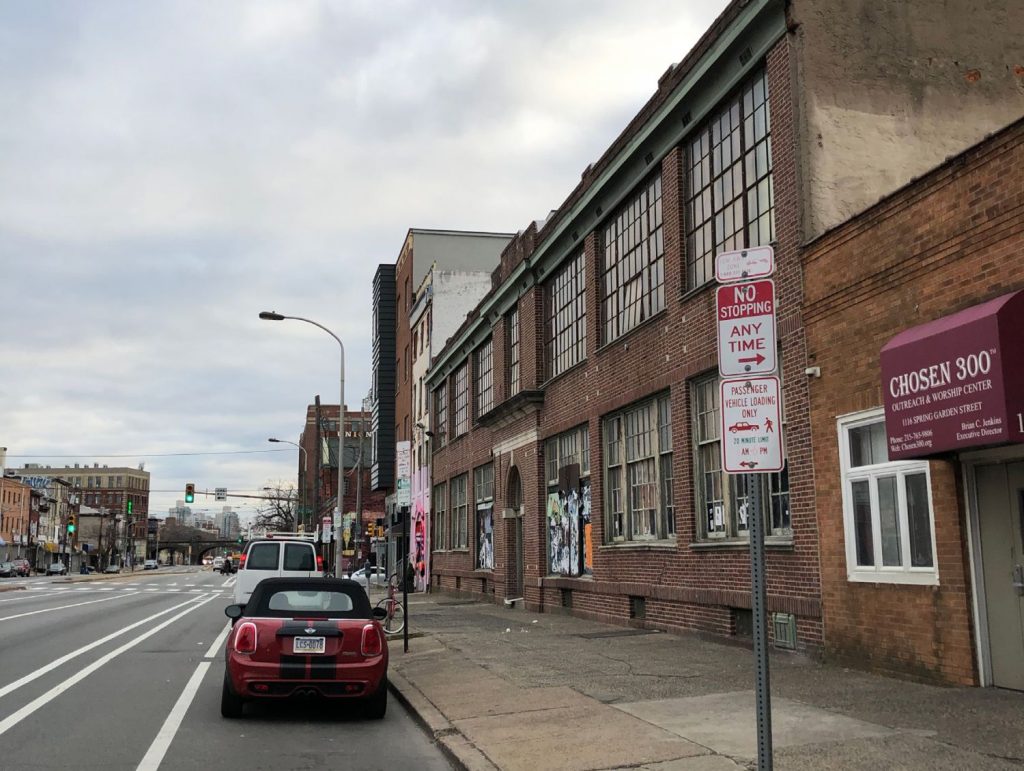 With the renovated prewar building serving as the retail podium (or at least with a preserved facade, with the structure behind it rebuilt), the rest of the project’s program could have fit into a high-rise building situated in the site’s interior, replacing a vacant lot. A building standing ten to 12 or so stories tall, a height consistent with the larger and bulkier projects already underway along Spring Garden Street, would have sufficed to hold the number of apartments currently proposed within the project. 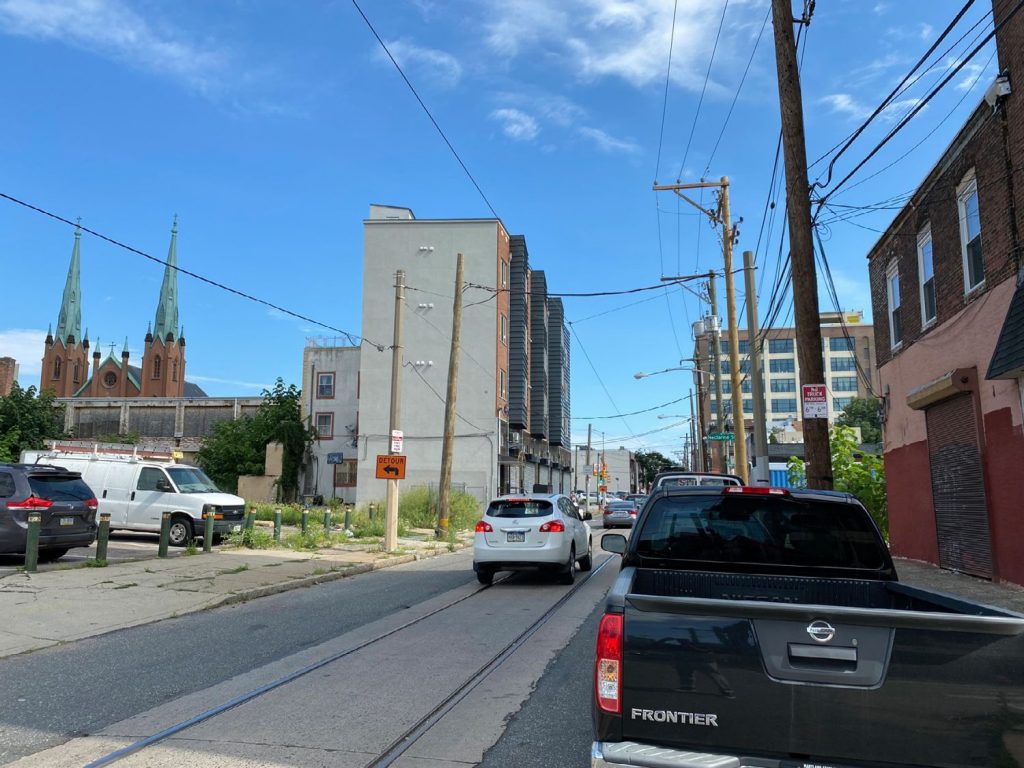 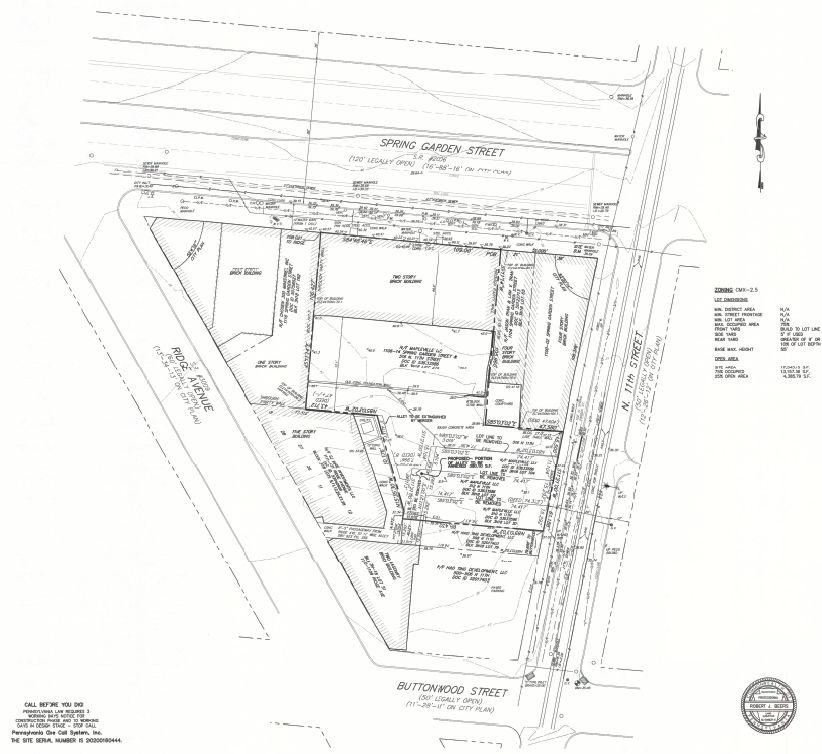 The taller, slimmer tower would have also allowed for smaller floorplates with less space between the hallway and the exterior, allowing for every bedroom to receive direct sunlight, eliminating the current arrangement where a large number of bedrooms will have no outdoor-facing windows and will receive only secondary sunlight that makes its way through long, north-facing living/dining rooms.

The site is large enough to even have allowed for the preservation of the currently-planned public space, perhaps shifted from the block interior to the more accessible site facing 11th Street.

Below is the site layout as it is currently proposed: 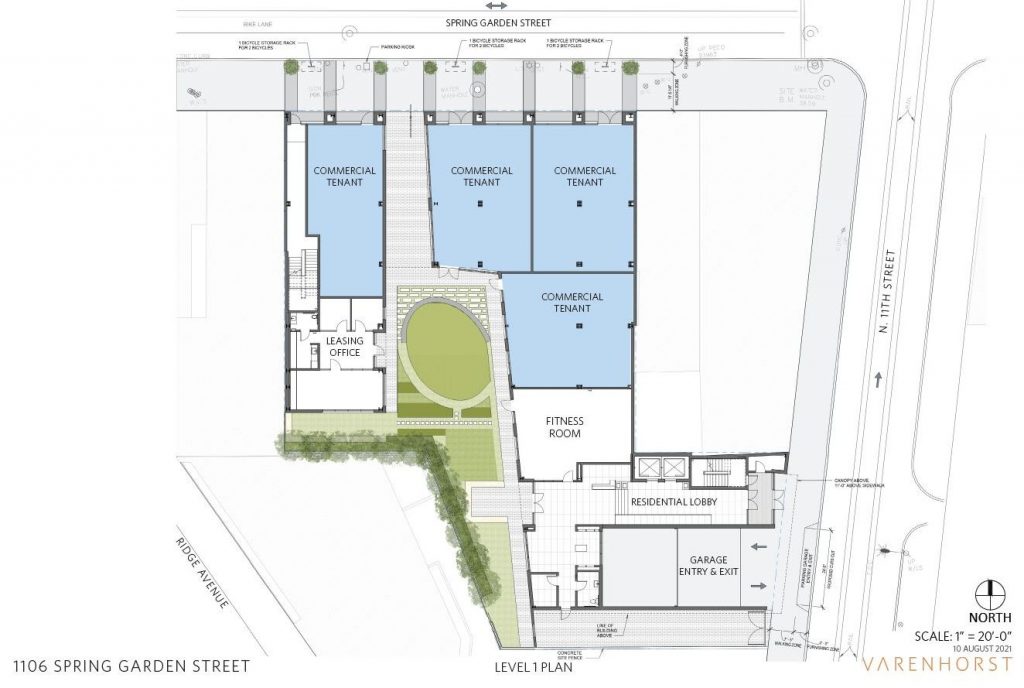 And below is an illustration of our suggestion for an alternate plan arrangement that would have preserved the existing building, unit count, and public space. 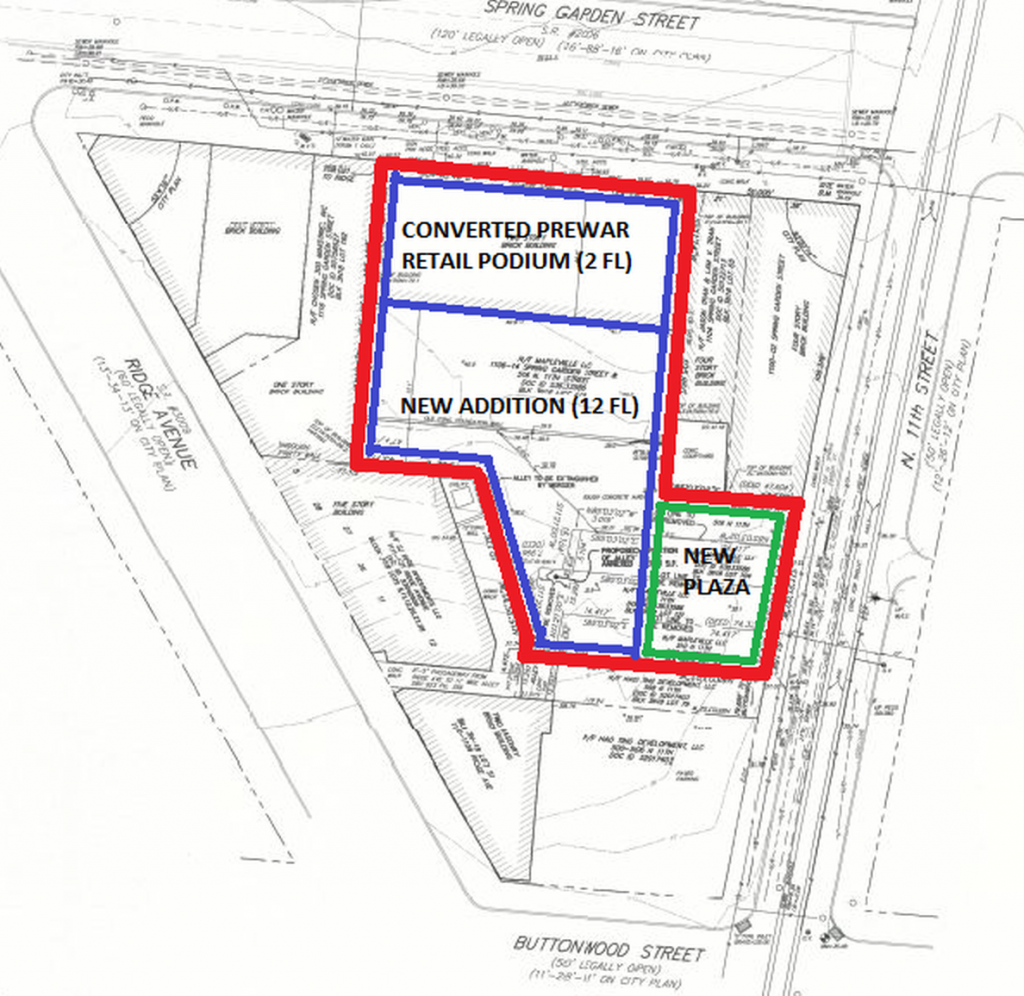 Several similar arrangements, with a preserved historic base and a new tower rising in the rear, have already been proposed elsewhere in the city, such as at 1810 Chestnut Street, 1826 Chestnut Street, 222 Walnut Street, and 113-121 South 19th Street.

Alas, the prewar building has already been torn down, with Spring Garden Street all the poorer for losing this grand commercial structure. Although it is easy to blame the loss on a lack of developer foresight (which, admittedly, is indeed a factor), the city is at least just as much at fault for failing to enact meaningful incentives for partial preservation or facade incorporation of prewar buildings into new projects.

Moreover, the city suffocates numerous neighborhoods with unreasonably low height limits, which force developers to sprawl outward rather than climb upward, razing anything that stands in the way of the squat, bulky proposals that are all too common on developers’ drawing boards.